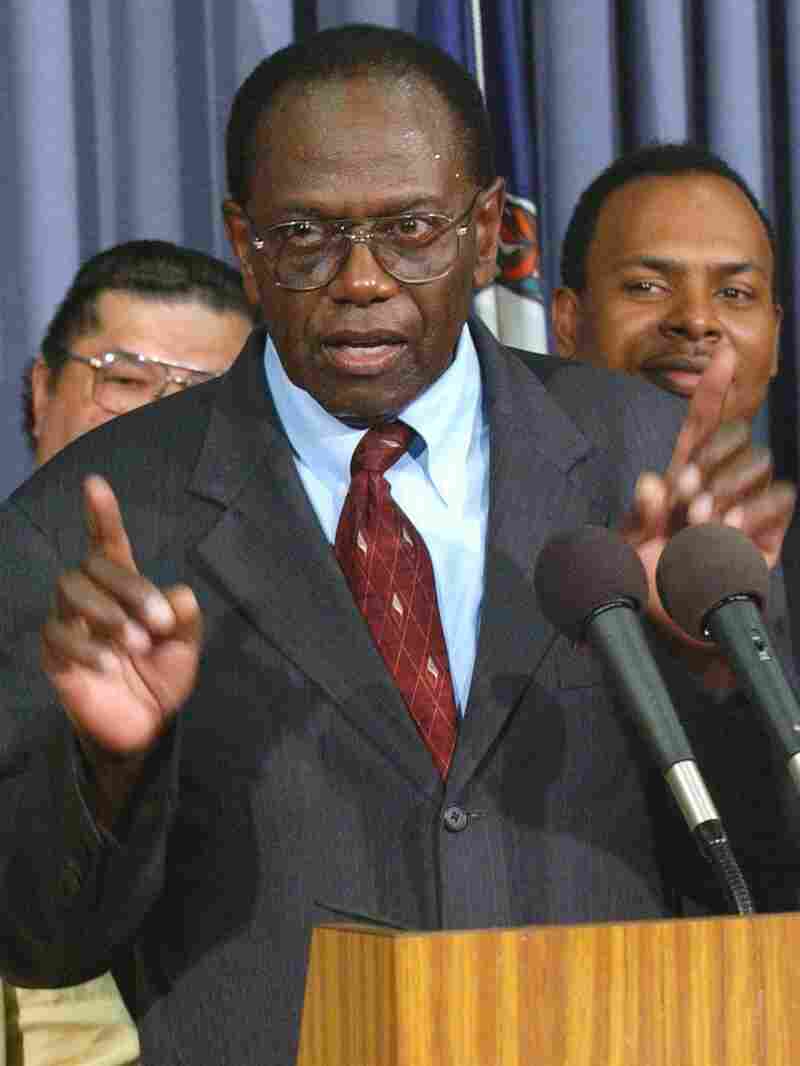 John Stokes, a student protester during the civil rights movement in the 1950's, speaks at a press conference in Richmond, Va., in 2004. As a high school senior in 1951, Stokes was one of the leaders of a student strike, protesting conditions at the all-black Moton High School in Virginia. Steve Helber/AP hide caption 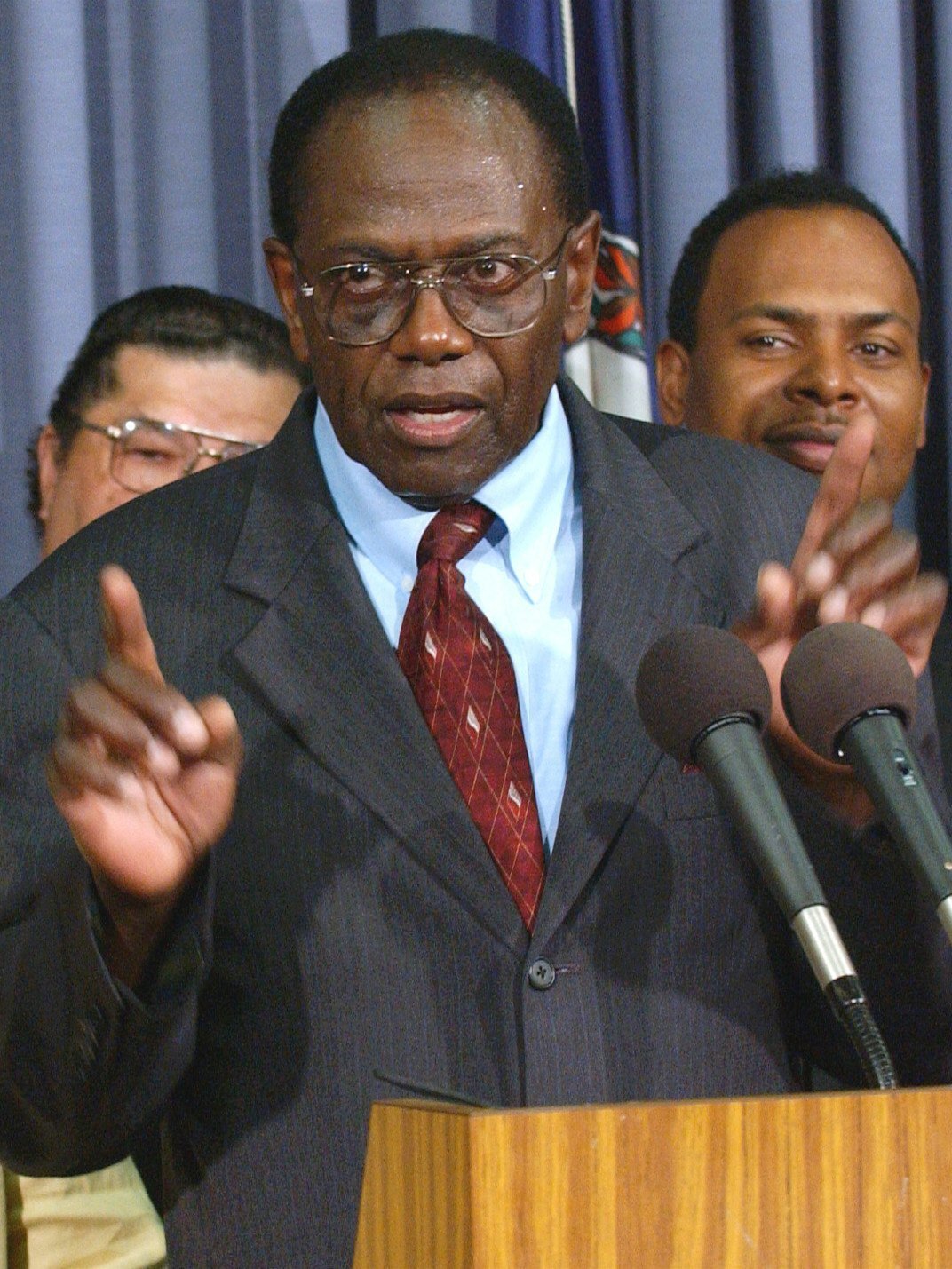 John Stokes, a student protester during the civil rights movement in the 1950's, speaks at a press conference in Richmond, Va., in 2004. As a high school senior in 1951, Stokes was one of the leaders of a student strike, protesting conditions at the all-black Moton High School in Virginia.

In May 1954, the Supreme Court handed down its decision in the case of Brown versus the Board of Education of Topeka, Kansas.

The nine justices were unanimous in their ruling, declaring unconstitutional the concept of "separate but equal" facilities for public school students divided by race. The intent was clear: end racial segregation in public schools nationwide.

Brown v. Board, as it's known, actually consisted of five lawsuits consolidated by the high court into one opinion.

John A. Stokes, one of the student plaintiffs in the Virginia case, is now 87 years old.

As a high school senior in 1951, Stokes was one of the leaders of a student strike, protesting conditions at the all-black Robert Russa Moton High School, outside Farmville, in the southern part of the state.

The strike led to Davis vs. Prince Edward County, one of the cases that eventually became part of Brown.

Stokes spoke with NPR's David Greene, and the following was adapted from their conversation. It has been edited for clarity.

Take me back to your high school in 1951, and tell me what the conditions were like.

By the time I arrived in high school, our school was in deplorable condition. It was one brick building that was constructed for 180 students, and in 1951 there were around 500 students there.

They put up tar paper shacks in order to accommodate the overflow. And that is where the problems really started. Because those buildings had no running water, no bathrooms, one pot-bellied stove that sat in the corner. During the wintertime, those who were closest to that particular stove burned, and those who were in the far corners of the room froze. The teacher normally taught with his or her coat on.

So the conditions were very, very bad. And so we had become very restless after parents had argued and fussed with the power structure about putting up a new facility.

But we realized that it was not that the state did not have the money to provide for us. It was just the fact that they did not believe in equality. They believed in punishing us so that we were programmed for failure. So this was the concept —we'll program them for failure, and they will not be successful.

What did you do?

We met and we formed a committee of 20. We wanted to be able to go forth and and get something done for the colored people in that neighborhood.

So we decided that we would go on strike. And on the 22nd of April, 1951, we had our last secret meeting at our little farmhouse near Farmville.

We knew that if the schools were closed, there would be some things that we would have to do. For instance, we had to have drivers for those students who came to school without knowing they'd be closed. So when the buses dropped them off, my friends and I took the students home and let the parents know exactly what was going on.

We went on strike. We asked for a meeting with the superintendent that day, but he refused.

Barbara, my sister, and another student drafted a letter to lawyers in Richmond, Virginia. And it indicated to the lawyers in Richmond that students had gone on strike and that this particular time, they needed help. And they talked with us, and they told us that they'd think about it. And the reason they ultimately took our case was because it was student-led.

I remember the day vividly. I was at Fort Belvoir, Virginia — I served in the Korean War.

There was not a cloud in the sky. Sergeant Taylor came out and said, "Soldiers, We have some good news. Good news — and maybe bad news." He said, "A case called Brown versus Board of Education has been passed."

At the time, I could not identify myself as a plaintiff because I had to be under the radar. We still had targets on our backs, so at the time I couldn't voice my opinion.

I was happy, but as I spoke with the people who were involved with the case, I knew that it was going to be an uphill battle. I knew that the power structure would not go easily. I knew that we had a hard and heavy fight.

There were fights, there was turmoil. There were lawsuits filed. There was resistance and things of that nature, so I had mixed feelings.

They closed the schools — I had cousins and other relatives who missed school, because the schools were closed from 1959 to 1964.

So we were still being punished for something that we felt we had a right to.

I think about Martin Luther King famously quoting that 19th-century clergyman who said, "The arc of the moral universe is long, but it bends toward justice." Sixty-five years after this Supreme Court decision, we've seen the issue of segregated schools persist. How long do you think this will take?

A long time. It's not easy. It's never going to be easy.

Because we can make any law we wish to make, but it has to be in the confines of a person's heart.

It has to be a moral issue, it has to be how a person feels in his heart about another human being. Because that's human nature. It's a long process — we have to be patient. If we rush, then we create problems. That's a cliche — hurry, but don't rush.