Accessibility links
NPR Review: 'Red, White & Royal Blue,' By Casey McQuiston Casey McQuiston's tale of a British prince who falls for the son of the U.S. president (who's a woman, by the way) is a snappy, banter-packed rom-com that's also empowering and uplifting. 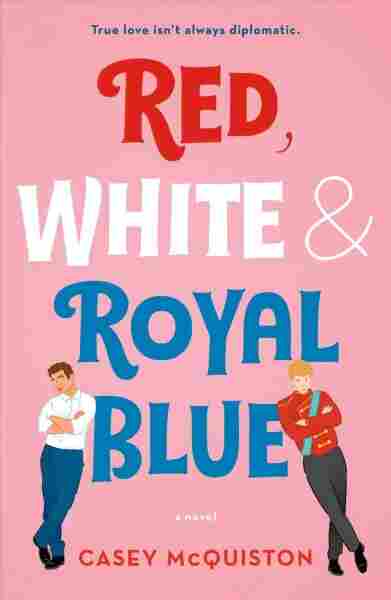 When Alexander Claremont-Diaz — son of the U.S. president — and his sister June travel to the U.K. to attend a royal wedding, Alex accidentally pushes his rival Prince Henry into the wedding cake, kicking off a media frenzy that has people on both sides of the Atlantic worried about an international crisis, particularly Alex's mom Ellen (who's the POTUS, by the way). As our two heroes are forced into damage control, an unlikely friendship-turned-romance blooms, leading Alex to think twice about his sexuality — and the implications of a risky relationship during a grueling re-election campaign for his mom.

The more Alex and Henry sneak around, the more their feelings intensify, which is the absolute last thing they need. Not only is Henry being pressured by his grandmother, Queen Mary, to fulfill necessary royal duties — even if it means ignoring his sexuality — but Alex himself is a political star on the rise. It's quite difficult to deny, however, how perfect they are for each other. Their flirty relationship is fueled by snappy banter that makes even historical research sound alluring, and their chemistry sparkles even at a distance, transcending politics and tradition; these are two men who love each other despite their baggage.

McQuiston writes with optimism, not just in telling Alex and Henry's story, but in discussing their individual aspirations, their concerns about the future of their respective countries, and their efforts to help the LGBTQ community. Ironically, she also walks us through the reality of a sitting female president who won the 2016 election — and throws us into the political cesspool of a fictional 2020 race that feels on the nose. ("But those emails," is a line Ellen's opponent does, in fact, try to use after a scandal breaks out in the White House).

And though her opponent tries to sabotage her campaign and belittle her, Ellen is surrounded by a cadre of supporters who save the day as often as they can, and who make this story doubly entertaining to read — especially the White House Trio (that would be Alex, June and the vice president's granddaughter Nora). In many ways, they make up a new political vanguard that I have no doubt could run the country in a few years (and actually get things done).

The trio's camaraderie feels like a reflection of energized younger generations today who are getting involved at all levels of politics. Alex, especially, wants to effect change by rallying marginalized voters in his home state of Texas — and other states — and he's thinking about law school as a first step to his goals.

Effervescent and empowering on all levels, 'Red, White & Royal Blue' is both a well-written love story and a celebration of identity.

"Maybe those populations might be more motivated to vote if we made an actual effort to campaign to them and showed them that we care, and how our platform is designed to help them, not leave them behind," he argues with a coworker. The single-minded way he approaches problems, pursues Henry, and works on the campaign complements Henry's own ambitions. They both want to make history in the best way possible, and the ways in which they think about their legacies is uplifting.

Effervescent and empowering on all levels, Red, White & Royal Blue is both a well-written love story and a celebration of identity. McQuiston may not be royal herself, but her novel reigns as must read rom-com.