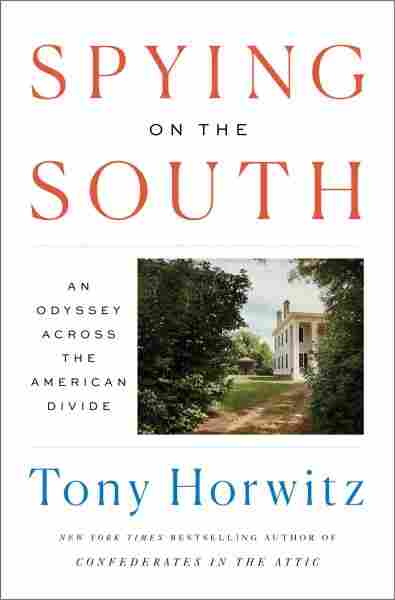 Spying on the South

An Odyssey Across the American Divide

I've been waiting for Tony Horwitz to write another big on-the-road book that crisscrosses the American cultural divide ever since his bestseller, Confederates in the Attic, came out in 1998.

For those who haven't read it, Confederates in the Attic is a revelatory and very funny first person travelogue in which Horwitz roams the South, talking to battlefield reenactors and members of the United Daughters of the Confederacy, in order to grasp what he calls America's "unfinished" Civil War.

Now, in his new book, Spying on the South, Horwitz is back exploring what critic Greil Marcus famously referred to as "the old, weird America." This time, though, Horwitz is not traveling alone: His ghostly companion is Frederick Law Olmsted, the great 19th century landscape architect, best known for designing New York's Central Park.

Spying on the South opened my eyes to so many things, starting with the figure of Olmsted himself. It turns out that, as a young man, Olmsted was monumentally "unfocused," dabbling in professions like merchant seaman and farming. His deliverance came in the form of a job offer in 1852 from the paper that would become The New York Times.

Olmsted's assignment was to roam the Antebellum South as an undercover correspondent. He set out on two journeys that lasted years, the second one taking him as far west as Texas. Eventually, Olmsted wrote some 64 dispatches for the Times, as well as three books. But the most unexpected and powerful legacy of Olmsted's travels was Central Park itself. The aristocratic Southern slaveholders he'd met had insisted to Olmsted that Northern society was every bit as hierarchical and closed as the South's. In answer, Olmsted created "a people's park," designed to be democratically open to all.

Some 160 years after Olmsted set out on the old B&O Railroad, Horwitz tells us he stepped aboard Amtrak: "No bookings. No itinerary. Just a ramble across America with long-dead Fred as my guide." Horwitz spends his first night on the road, as Olmsted did, in the town of Cumberland, Md., which Olmsted described as "comfortless"; nevertheless, back then the town was a major transportation hub, billed as the "Gateway to the West."

These days, a Cumberland tavern owner tells Horwitz that the major industry is "Locking people up" in the area's eight correctional facilities. That first night in Cumberland sets the pattern for how Horwitz's impressions will contrast with Olmsted's.

For the mostly white, working-class Americans Horwitz meets, the old promise of something better waiting beyond the horizon has been exhausted. Aboard a coal barge he rides down the Ohio River, Horwitz talks to a first mate who tells him that the barge offers "a good living for country boys, ... a place you can still work from the neck down."

But, that coal barge is a slow-moving relic of America's industrial past; the small-town present that Horwitz travels through is a landscape dominated by abandoned storefronts, rehab centers, and wheezing businesses like the "Cheap-O Depot."

Horwitz rightly prides himself on being a curious and empathetic freestyle conversationalist — a gift that Olmsted apparently shared. Traveling south and west by car, steamboat, and even mule in advance of the 2016 primary season, Horwitz wants to gauge what Olmsted called "the drift of things" in America.

What he hears at almost every restaurant, bar, plantation house tour, and town hall meeting is an earful about big government, gun rights and the fallacy of climate change, as well as disgust with "handout Democrats." He also hears uglier views, like in Crockett, Texas, where white members of the Moosehead Lodge hold fast to a racist conspiracy theory — even against the word of the local sheriff — that a big gated property owned by a South Asian doctor is really "a terrorist training camp." Horwitz leaves Crockett with his faith in the illuminating power of fact, shaken.

Spying on the South is every bit as enlightening and alive with detail, absurdity and colorful characters as Confederates in the Attic was. That said, though, at a time when the American divide seems deeper and more entrenched, both books strike me as more somber than comic.

Horwitz tells us that he began his travels identifying with Olmsted's "missionary spirit, believing that there was always room for dialogue, and great value in having it, if only to make it harder for Americans to demonize one another." At journey's end, however, the earnest Horwitz finds himself all talked out. In a rainy Central Park, he tells us he walked from one end of Olmsted's great park to another, "unaccustomedly alone with my thoughts."