Accessibility links
North Korean State TV Gets A Makeover The nation's broadcaster revamped its style and format — but not its message — after authorities ordered propagandists to "disregard the established customs" in the face of an influx of foreign info. In this episode last September of News From Soldiers' Hometowns, an evening show on North Korea's Korean Central Television, the show's anchor is interrupted by a presenter who walks on with papers in hand to deliver an update. DPRK Today/Screenshot by NPR hide caption 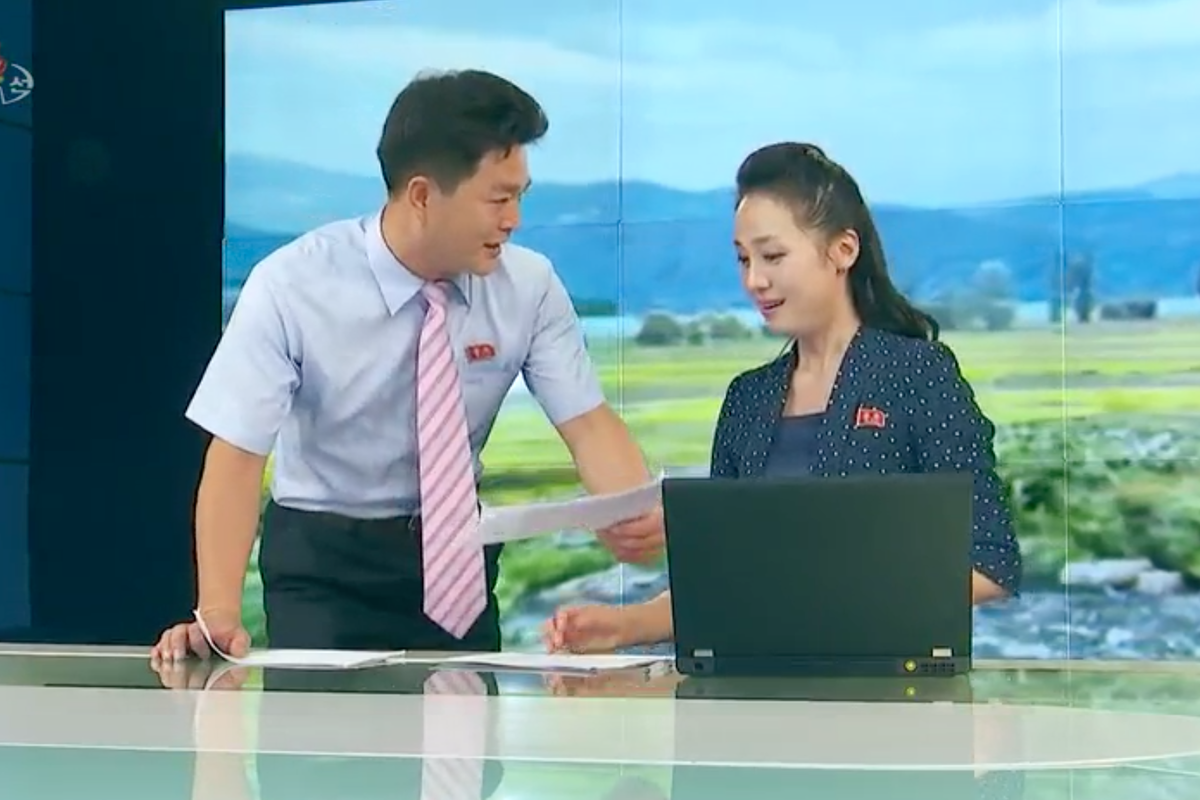 In this episode last September of News From Soldiers' Hometowns, an evening show on North Korea's Korean Central Television, the show's anchor is interrupted by a presenter who walks on with papers in hand to deliver an update.

There's an evening show on North Korea's state TV that brings soldiers news from their hometowns.

Last September, the show on the regime-run Korean Central Television, or KCTV, was interrupted for an urgent update.

"Another piece of news from our families on the homefront, just in from the Kangson steel factory," an announcer says.

"Soldiers from Kangson will be happy to hear that," the anchor replies, beaming.

The update: A soldier's father says he and fellow factory workers are so motivated that they will beat production targets by 50%.

The spirited labor message is decades old. But the presentation, including the staged interruption, hints at a change in propaganda tactics.

The news presenters are fresh faced. Their attire is business casual. Their dialogue is chatty. You might almost think it's a South Korean show. One giveaway that it's not is the anchors' red lapel pins bearing images of old North Korean leaders, worn only in the North.

The program is an example of recent North Korean efforts to give propaganda a makeover. Analysts say it is a response to fierce competition between Pyongyang's narrative — that its foreign and domestic policies are succeeding — and an influx of outside information, in spite of government attempts to completely shut it out.

North Korean authorities "know that they can't go on with the old ways of propaganda and idolizing leaders," Jang Hae-sung, a former KCTV reporter who defected to South Korea in the 1990s, tells NPR.

"But they have no choice," he says, "because if they admit their failings, the regime could collapse."

In the past, stern-faced anchors stolidly read their scripts, and there were few visuals. For major events, such as nuclear tests, presidential summits and the death of national leaders, state television would wheel out veteran anchor Ri Chun Hee. She is known for her dramatic spiels, delivered wearing a traditional hanbok dress and in front of a backdrop of the crater atop Mount Paektu, the mythical birthplace of founding dynast Kim Il Sung. 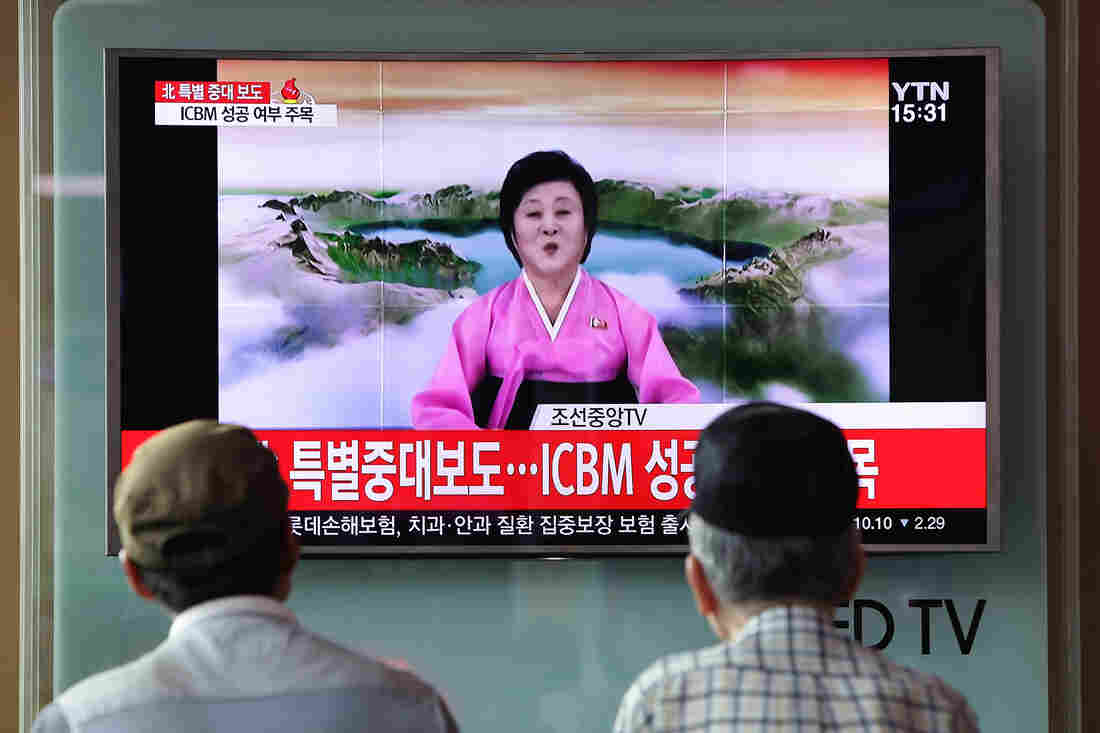 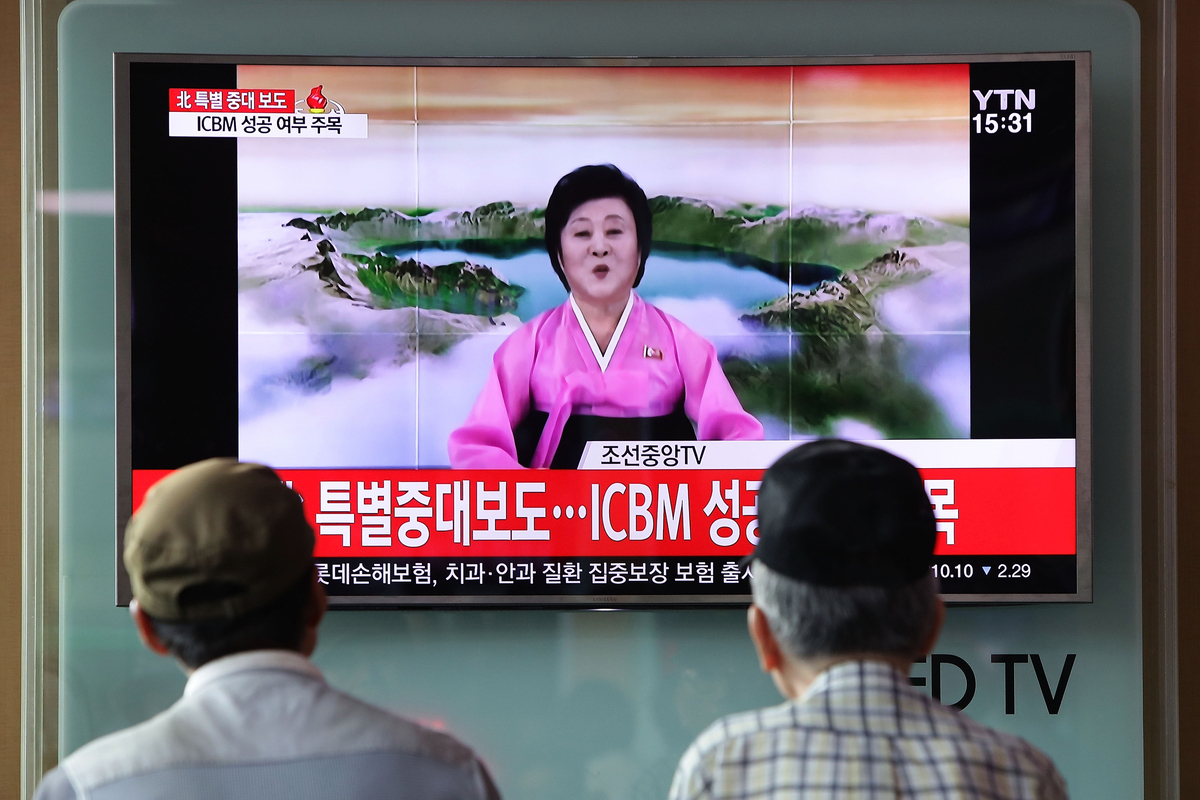 In recent months, though, the network's business reports have begun to use digitally designed charts and graphics. Weather forecasters have stood up from their desks. Previously unseen TV studios and control rooms have begun to appear on-screen.

North Korea's leader, Kim Jong Un, himself underwent an on-air makeover for his annual televised New Year's address, ditching his rostrum and his Mao suit of years past. He instead donned a suit and tie and ensconced himself in a book-lined, wood-paneled study, which North Korea watchers say was apparently aimed at making him look more genial and statesmanlike.

Authorities, meanwhile, have issued a slew of directives to the effect that news and propaganda "should boldly disregard the established customs and conventional way of writing and editing," as the ruling party's flagship newspaper, Rodong Sinmun, proclaimed in a May 7 article.

Another Rodong op-ed on April 29 called for "fact based" propaganda that should never "fail to take into account the general public's cognitive and emotional capabilities."

In March, Kim himself wrote a letter to propaganda workers, telling them that "mystifying the leader's revolutionary activities to emphasize his greatness will bury the truth." He added: "Only when the people are charmed by the leader as a human and a comrade will they feel a sense of absolute loyalty."

The statements, analysts say, reflect the fact that North Koreans increasingly have access to alternative sources of information that challenge the leadership's narrative.

This is happening despite authorities' best efforts, Kang points out. Few of North Korea's more than 25 million people have access to the Internet, and those who do are limited to surfing a dozen or so government-run sites. Several million North Koreans now have mobile phones, but their calls are believed to be monitored by authorities.

Jang, the former KCTV reporter who is now retired, confides that when he was with the North's network, he had access to foreign news and domestic intelligence briefings and, although he couldn't discuss it publicly, he knew pretty well what was happening at home and abroad. He says other North Korean elites are in a similar position.

Increasingly, ordinary North Koreans are also exposed to outside news and entertainment through smuggled DVDs, thumb drives and memory cards or in broadcasts from foreign media outlets, such as Radio Free Asia and the BBC, accessed through shortwave radios.

In Korean DMZ, Wildlife Thrives. Some Conservationists Worry Peace Could Disrupt It

And it is carried in the minds of North Korean traders and laborers — from seafood merchants in China to lumberjacks in Russia's Far East — who can access foreign media while working abroad.

Even though North Korea's leaders can easily jail their critics, analysts say, they still have to at least appear to care about what people think.

"No matter how much propaganda it puts out," Kang says, "the North Korean government knows that its people know that what they are telling them is not true."

The influx of information has undermined North Korea's control over the narrative of current events, most notably in February in Vietnam, when President Trump walked out on what he said was a bad deal offered by Kim Jong Un.

Kim Seung-chul says that following this summit, North Korean diplomats told workers overseas: " 'We have our own position on this. You just wait and see. But in the meantime, don't tell anyone about it. Don't even discuss it with each other.' "

But the news got into North Korea anyway, and after a week of claiming the summit was a victory for Kim Jong Un, state media did an about-face, blaming hard-liners within the Trump administration for sabotaging the summit.

"Our people, especially our military and munitions industry, are saying we must never give up nuclear capabilities," Choe said, and therefore they opposed Kim Jong Un's making a deal with Trump in Vietnam.