Accessibility links
California Teachers Pay For Their Own Substitute Teachers During Long Sick Leave A teacher battling cancer has to pay for her own substitute. Now some lawmakers are calling for a change in the state education code to eliminate this hardship.

Listen · 3:29 3:29
California Teachers Pay For Their Own Substitutes During Extended Sick Leave 3:29 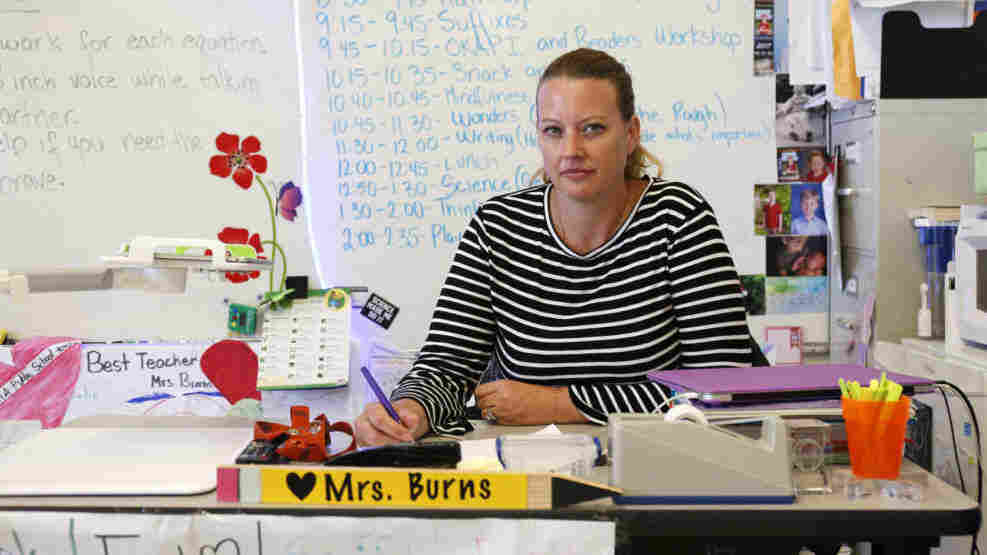 Heather Burns at Martin Elementary School in South San Francisco, where she now teaches third grade. Burns was diagnosed with breast cancer in 2016 and had to pay for her own substitute while on sick leave. Stephanie Lister/KQED hide caption 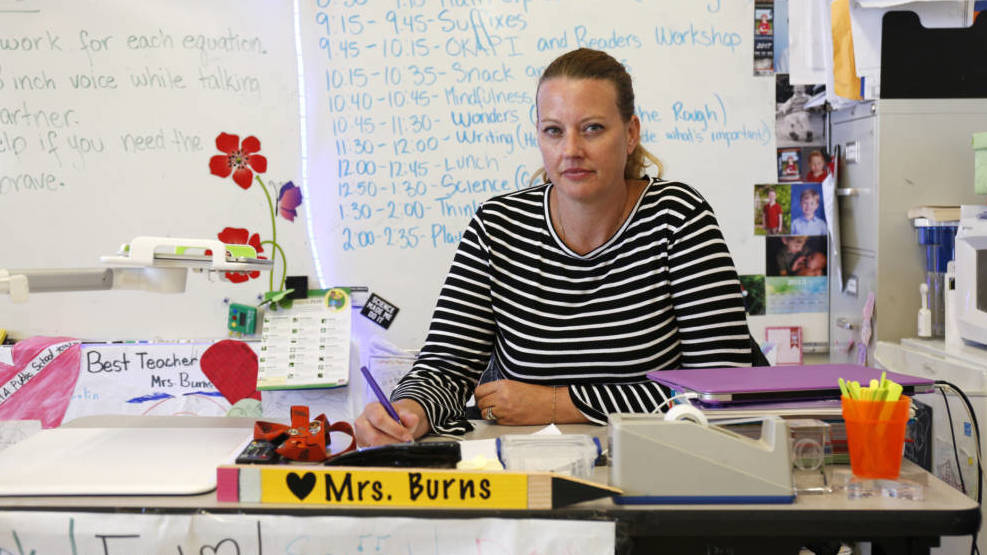 Heather Burns at Martin Elementary School in South San Francisco, where she now teaches third grade. Burns was diagnosed with breast cancer in 2016 and had to pay for her own substitute while on sick leave.

A 40-year-old California law requiring public school teachers on extended sick leave to pay for their own substitute teachers is under scrutiny by some state lawmakers after NPR member station KQED reported on the practice.

KQED found that a San Francisco Unified elementary school teacher had to pay the cost of her own substitute — amounting to nearly half of her paycheck — while she underwent extended cancer treatment. Since the story published, more public school teachers have reached out to describe similar hardships.

Unlike many other employees, public school teachers in California don't pay into the state disability insurance program and can't draw benefits from it. Under the California Education Code, teachers get 10 sick days a year, after which they receive 100 days of extended sick leave. It's during this latter period that the cost of a substitute teacher is deducted from their salary.

Eric Heins, president of the California Teachers Association, said fixing the problem could be as simple as eliminating that part of the education code.

"Some of our advocates in Sacramento are talking with both the governor's office and with [state Sen.] Connie Leyva and others who have expressed interest as this continues to go viral," he said. "There's a lot of discussion about it and outrage and ... you can say rightfully so."

I'm sorry we don't have a better system in place. We couldn't help you, but we're going to try and fix it for future teachers.

But Heins added that scrapping the 1976 law would strain already cash-strapped districts, and he noted that extra state funding would first be necessary. "It's about money, of course," he said. "When you're in an underfunded system you're still robbing Peter to pay Paul."

Leyva, who chairs the Senate Education Committee, offered an apology to teachers who have had to pay for their substitutes while facing catastrophic illness.

"I'm sorry we don't have a better system in place," she said in a recent interview. "We couldn't help you, but we're going to try and fix it for future teachers."

But Leyva said that fix will likely have to wait until the next legislative session. "What we're finding is that it's a little more complicated than we thought it was," she said.

The issue is receiving some national attention this week, with Vermont senator and 2020 Democratic presidential candidate Bernie Sanders weighing in via Facebook on Tuesday.

A fix to the system would have helped Heather Burns, who was diagnosed with breast cancer in 2016 while teaching fifth grade at Sheridan Elementary School in San Francisco. She and her husband had just had a child and purchased a new home.

It's absolutely outrageous and leaves you in a state of desperation when your cancer diagnosis already has taken your hope away.

While receiving treatment on extended sick leave, Burns began getting paychecks that came to less than half of her regular pay after the cost of the substitute had been deducted.

"It's absolutely outrageous and leaves you in a state of desperation when your cancer diagnosis already has taken your hope away," she said.

Burns worried that she and her husband wouldn't be able to make mortgage payments on their home, and she had to ultimately rely on help from her parents. She said she was also never told there was a sick-leave bank of donated days from other teachers available, which she might have been able to draw from after using up her own extended leave at partial pay.

"I was never contacted," she said. "I was never told. I know that my principal wasn't either, because she would have definitely let me know."

"I'm sick. I just had surgery. I've just gotten diagnosed with breast cancer. My world is falling apart and they just send me my paycheck," she said. "And I literally had to figure out with my husband how we were gonna make things work, get my treatment over the summer, and go back to work so I didn't have to pay for a sub."

Even though Burns' doctor advised her not to return to work, she said she couldn't afford to stay home. Still sick and exhausted from her radiation treatment, she reluctantly returned to her fifth-grade classroom at Sheridan Elementary School at the beginning of the following school year.

On her first day back, Burns said, her principal apologetically informed her that she would have 41 students in her class. At that point, she began looking to move to another district and is now teaching third grade in South San Francisco, where her classes are notably smaller.

Burns thinks one reason why this law has gone unnoticed for so long is that, when teachers like herself are dealing with catastrophic illness, they are too preoccupied to contest the issue with their district.

"Your first priority is getting better, staying healthy and taking care of your loved ones," she said. "It's inhumane to expect that they would be able to have any space to advocate for better and more fair policies while they're going through what's probably the worst time in their lives."

While teachers paying for their own substitutes while on extended sick leave has raised concerns, few if any employers pay employees a full salary when they are unable to work for long periods of time.

"It's important to note that teachers, unlike most workers, are not required to pay into any disability insurance," San Francisco Unified School District spokeswoman Laura Dudnick said in an email. "All other civil service employees ... do pay into state disability, regardless of whether they ever use it."

Dudnick added that the school district offers "one of the most competitive benefits packages in the state."

California does not mandate paid extended sick leave, and the cost to most employers would be prohibitive, said Jenn Protas, an employment lawyer.

The 1976 education code provision was, at the time, likely considered a benefit to teachers, Protas added, by guaranteeing 100 days of extended sick leave at partial pay, while protecting their jobs.

Teachers from across the state plan to march on Sacramento on May 22 to demand more funding for schools. CTA's Heins said that kind of public support is what it will take to drive change for this issue of substitute pay.

"It's been around 50 years — and now as the awareness has come to the forefront, suddenly everybody's like, 'Oh, my God, this is really horrible! How can this happen?'" he said. "I think that it's about changing the narrative around funding for public education so that it's not just business as usual."