Accessibility links
Judge Rules Against Trump In Subpoena Fight; Don McGahn Testimony Blocked Republicans and Democrats landed blows and counterblows in the high-stakes political and legal slugfest. President Trump is keeping his former counsel off the Hill, but Democrats won in court. 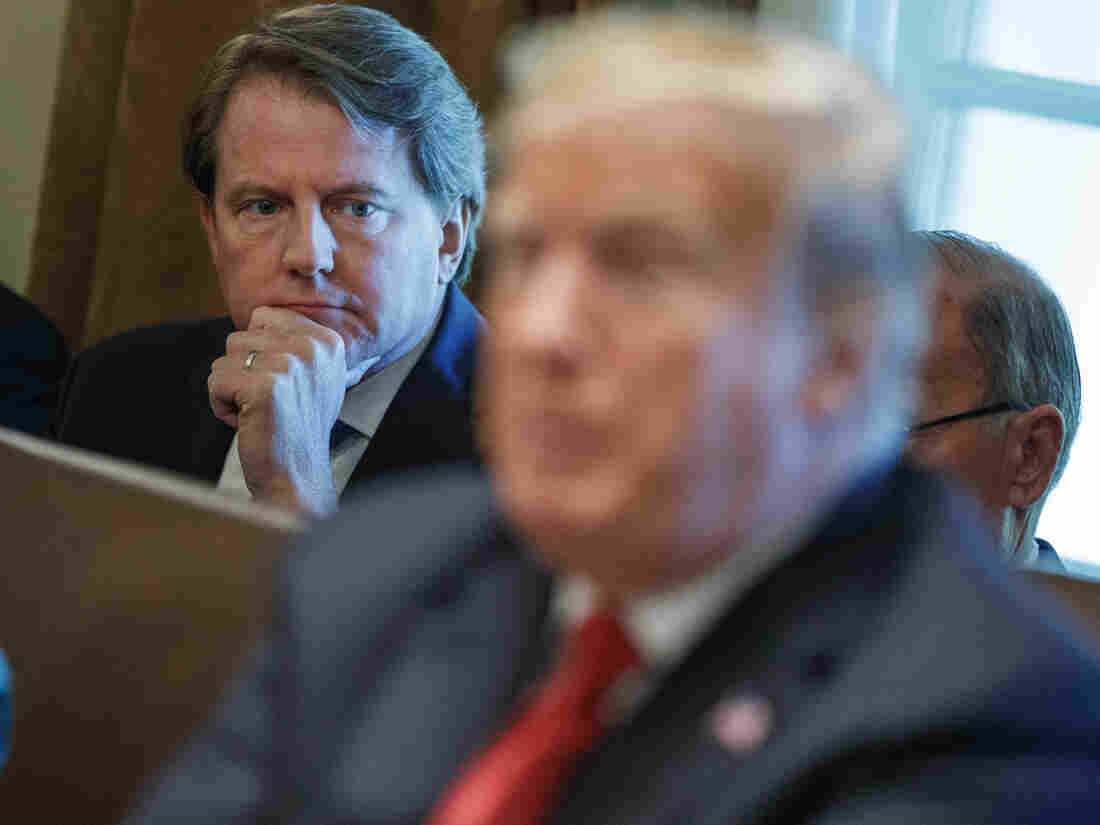 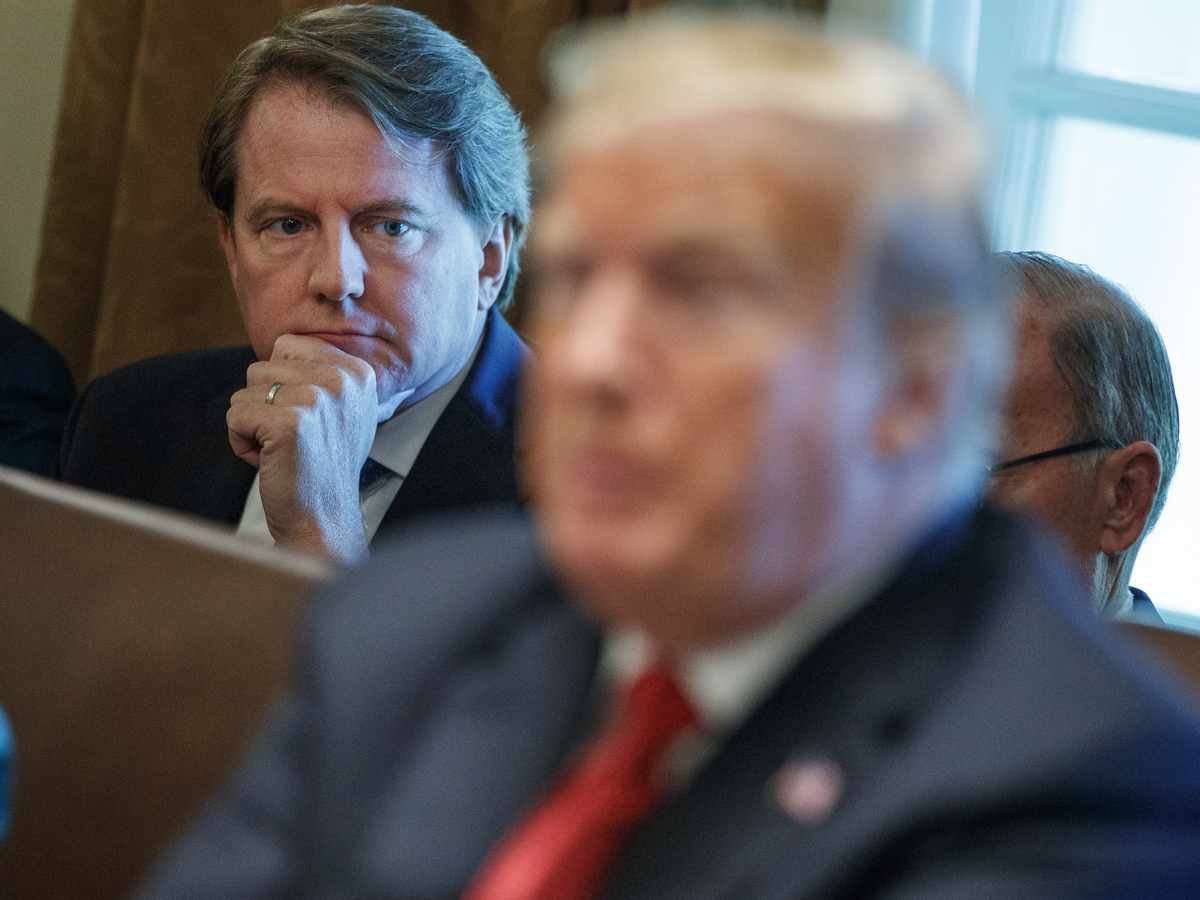 Then-White House counsel Don McGahn looks on as President Trump speaks during a Cabinet meeting in October 2018. McGahn is now barred from talking to Congress, the White House says.

A federal judge ruled against President Trump on Monday in a subpoena dispute not long after the White House said it is seeking to block its former top lawyer from talking to Congress.

The events amounted to a win — and a loss — apiece for Republicans and Democrats in their ongoing high-stakes legal and political war over separation of powers and oversight in the aftermath of special counsel Robert Mueller's investigation.

First, the White House said on Monday that the law and precedent give former White House counsel Don McGahn immunity from appearing before the House Judiciary Committee on Tuesday, which Democrats wanted.

Chairman Jerry Nadler, D-N.Y., and his majority issued a subpoena that sought to compel McGahn to appear and hand over documents.

No, the administration says — advisers of McGahn's stature have the privilege not to comply given their closeness to the president.

Ordering them to appear is almost like ordering the president himself to appear, and members of Congress couldn't force Trump himself to testify any more than Trump could command a lawmaker to show up at the White House, the Justice Department argued.

Assistant Attorney General Steven Engel sent the current White House counsel, Pat Cipollone, a 15-page legal memo on Monday detailing what Engel called the reasons that the White House can keep McGahn and his documents out of the hands of lawmakers.

"We believe that these established principles apply to bar the committee from compelling Mr. McGahn to testify," Engel wrote. "The counsel to the president clearly qualifies as a senior adviser to testimonial immunity. ... We have also recognized that the immunity continues to apply after the counsel leaves the White House."

Meanwhile, White House counsel Cipollone wrote to Nadler to affirm that McGahn would not appear at any hearing on Tuesday as Democrats had hoped.

McGahn's attorneys have said he is going to stand fast and take no action until the questions are resolved between the branches of government.

The House Judiciary Committee is going to convene on Tuesday as planned, Nadler said, with the expectation that McGahn will be there. If that happens, but McGahn doesn't show, it would be the second recent time that Nadler has held a hearing with an empty witness chair.

Not long after Engel's letter appeared on Monday, a federal judge in Washington handed a victory to Democrats in a parallel dispute over access to some of Trump's financial records.

Trump had sued to quash that subpoena, arguing that members of Congress had no legitimate legislative purposes that supported their desire to get the documents.

Yes they do, Mehta wrote.

His 41-page opinion traced the history of tension between the separate branches of government — but concluded Congress in this case is within its power and that the reasons cited by lawmakers to compel the release of the records are "facially valid legislative purposes."

Members of Congress say they want to confirm whether Trump is in compliance with foreign emoluments clauses, and his accounting records would help establish that. Questions have swirled — and been denied by Trump — about whether he might be subject to some kind of financial coercion by lenders overseas.

"Today's decision is a resounding victory for the rule of law and our constitutional system of checks and balances," he said. "The court recognized the basic, but crucial fact that Congress has authority to conduct investigations as part of our core function under the Constitution."

The president told reporters on his way to a rally in Pennsylvania it was "totally the wrong decision by an Obama-appointed judge."

Trump and House Democrats are in a trench war over the rival powers of Congress and the executive branch as lawmakers seek to learn more following the Mueller investigation.

Nadler, Cummings and their colleagues argue there are big unanswered questions about Trump's business operations and his finances.

Trump and the White House say Democrats are simply trying to drag out the Russia investigation following Mueller's conclusion that Trump's campaign didn't conspire with Russia's attack on the election in 2016.

The conflict has been building over several months. Attorney General William Barr did not show up at a hearing of Nadler's committee after a dispute with the majority over the process for questions — the last time the panel met across the witness table from an empty seat.

Nadler and his committee may vote soon to hold McGahn or others in contempt of Congress, as well. That would set the stage for a vote by the full House of Representatives, possibly later in the summer, to hold Barr, McGahn and possibly others in contempt, too.

Members of Congress may use lawsuits to challenge the denials they have encountered from the administration in accessing witnesses and documents, but those cases could take months or years to resolve.

In the short term, the effect of Trump's and Barr's decisions is to stop House Democrats from getting more grist for investigations built to follow up on or build upon that completed by Mueller.