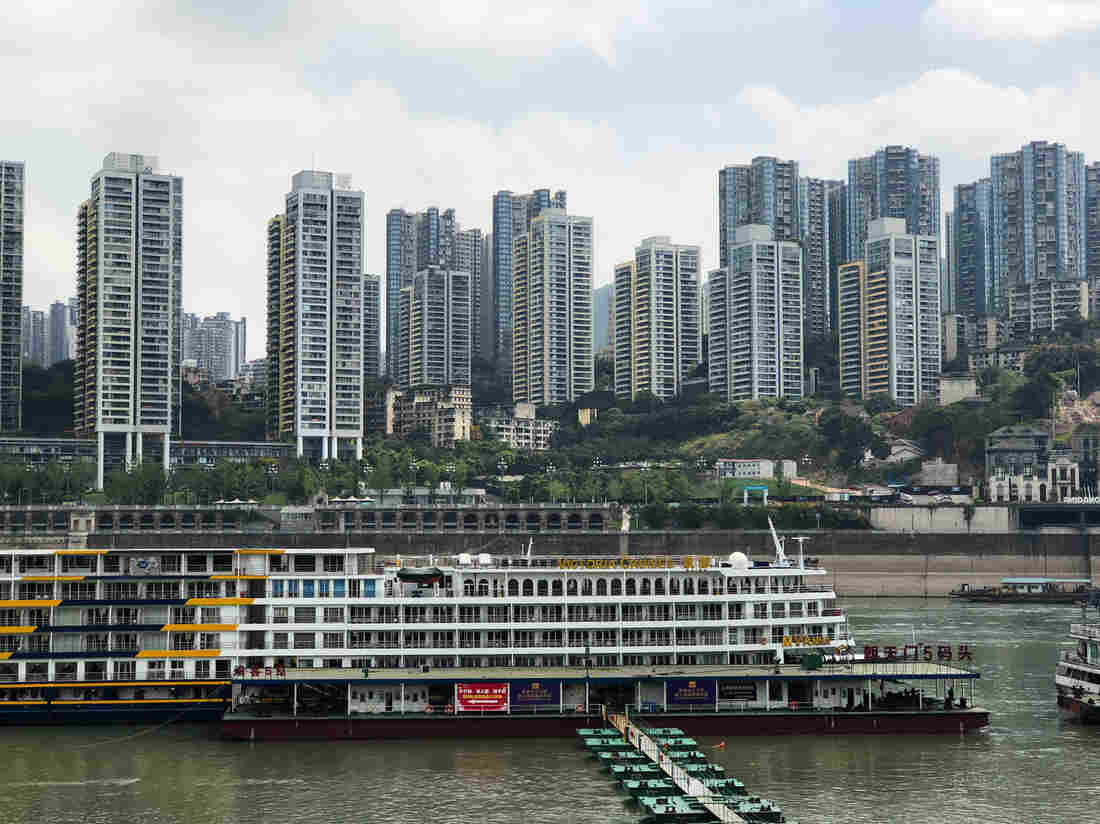 A passenger vessel traveling down the Yangtze River stops at a dock in downtown Chongqing, China. Rob Schmitz/NPR hide caption 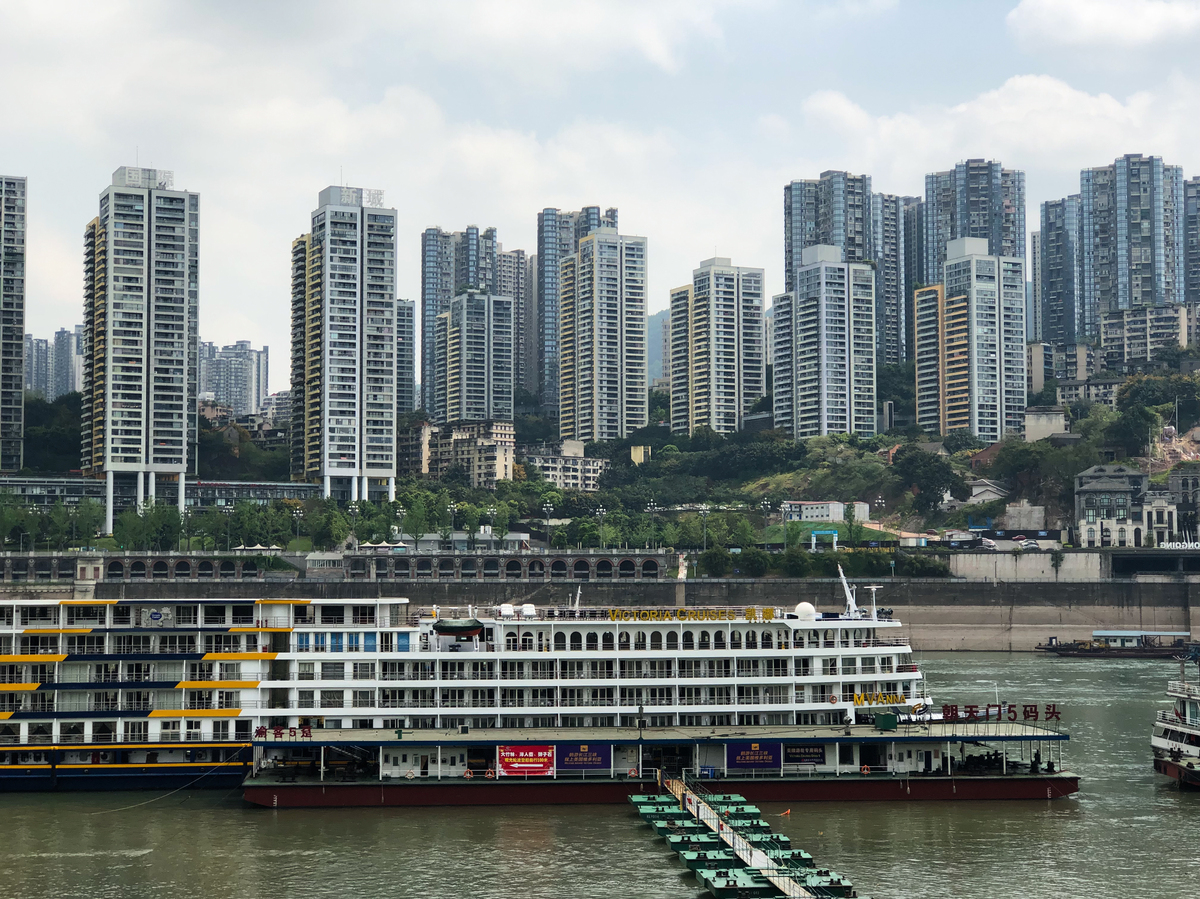 A passenger vessel traveling down the Yangtze River stops at a dock in downtown Chongqing, China.

He Qiang should be manning his convenience store, but today he's collecting tiny green berries along the road and shooting them at birds with his slingshot. The 26-year-old is distracting himself from his worries. He spent all his savings — the equivalent of $35,000 — on a store that no longer has any customers.

He bought the store a year ago after hearing the economy of Hechuan, this city of more than a million people just outside the metropolis of Chongqing in southwest-central China, was booming. Automobile factories in Hechuan employed thousands of people who churned out SUVs for China's consumer class.

"My shop did well for a month after I moved here," says He, taking aim at a bird atop a tree. "But then, everyone left. Now, they're all gone. Every day, more people leave."

Assembly lines have shut down, workers have left, and Hechuan's streets, shops and many residents' pocketbooks are now empty. He's convenience store is still open, but hardly anybody buys anything, so he's taken another job next door as a fast food deliveryman. He says he rarely has to work because the restaurant is usually empty. It pays the equivalent of $500 a month.

"I'm barely getting by," He says. "I'm waiting to see if the economy picks up this year. When I lose all my money, I'll leave."

We can feel the impact of the trade war with America here.

Hechuan has been incorporated into the greater Chongqing municipality, which is one of four megacities under the Chinese central government's control, and the only one located far away from a coast. Chongqing's population of more than 30 million lives among lush mountains and its hilly downtown is split by the Yangtze River.

This is China's blue-collar capital, home to an aspiring middle class and a landscape of factories at the heart of China's industrial sector; a heart whose beat is weakening.

Overall, China has reported its slowest economic growth in nearly three decades, a historic slowdown amid weakened domestic demand and a tense trade war with the United States.

For more than a decade, Chongqing's economy sped ahead with double-digit annual growth. But last year, the city's gross domestic product grew less than expected at 6% — its slowest pace since 1989, according to the South China Morning Post. Industrial output overall grew just 3%, a 30-year low, the site said, while production in the auto sector plunged more than 17%, compared with the previous year.

Zhong Hua, 38, is one of thousands laid off from his assembly line job at Ford's joint venture with China's state-owned Chang'an. His position was terminated four months ago. "The economy here is really slipping," Zhong says at a job fair at a Chongqing office building. It is the eighth job fair he has been to since losing his employment. "We can feel the impact of the trade war with America here. The auto industry is in recession. There are so many unemployed people."

Zhong says he struggles to stay afloat, and support his wife and two kids, on his government unemployment checks, equal to about $200 a month.

Figures released by the China Institute for Employment Research at Renmin University in Beijing show the supply of jobs in western China, including Chongqing, fell by an alarming 77% in the fourth quarter of last year compared to the same period in 2017. 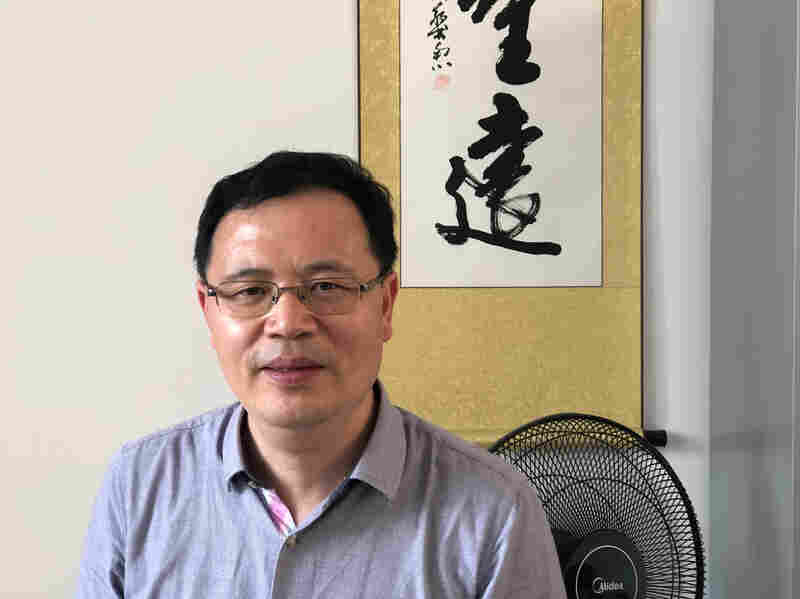 Qiu Dongyang, a professor at the Chongqing University of Technology, says the city's economy is cooling off but that it is a good thing. Rob Schmitz/NPR hide caption 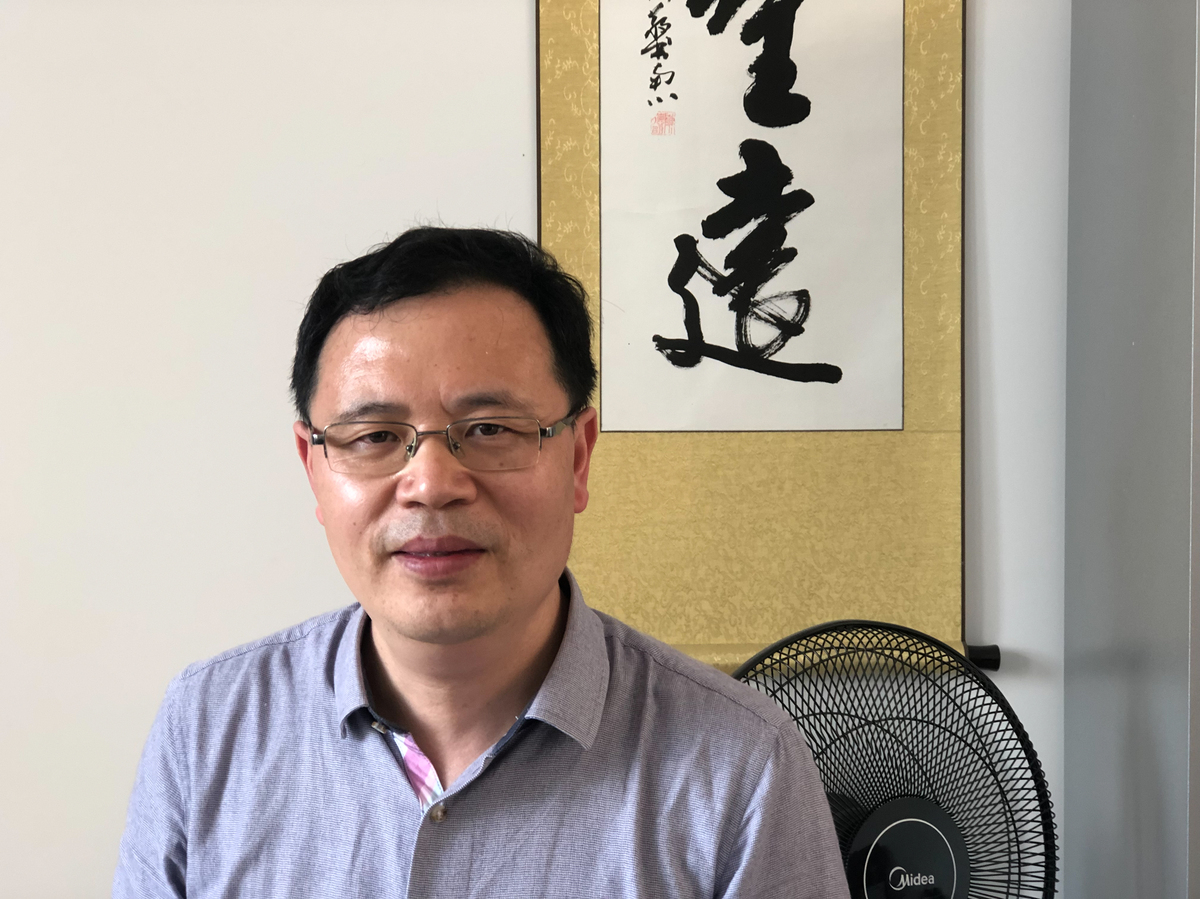 Qiu Dongyang, a professor at the Chongqing University of Technology, says the city's economy is cooling off but that it is a good thing.

Qiu Dongyang, professor at the MBA Education Center at the Chongqing University of Technology, says Chongqing's economy is cooling off, but he says that's a good thing.

While the city's auto sector has been hit hard, China's growing service sector has provided jobs for some of the cut workers. "It's normal for growth to slow like this. The economy has reached a plateau, and both infrastructure and development in the city have done well," Qiu says.

After decades of demolition and reconstruction, Chongqing's city center has finally become a stunning mix of the natural world — forest-covered mountains crisscrossed by rivers — with a glimmering vertical landscape of steel and glass towers. But among the urban jungle lie hundreds of billions of dollars' worth of unfinished projects, like the Hongyan Village Jialing River Bridge, west of downtown Chongqing. Construction on the $660 million bridge began in 2012 but has been halted for the last three years, reportedly because of a lack of funding. What remains are massive pillars rising from the Jialing River alongside cranes frozen in time.

"The city has other bridges under construction, too," says 72-year-old Lai Sanhui. "There are so many unfinished bridges."

Lai makes daily trips to a park beside the unfinished bridge to check on its progress. "They've stopped work for a couple of years," he says. "It would be finished already if they hadn't stopped working on it." 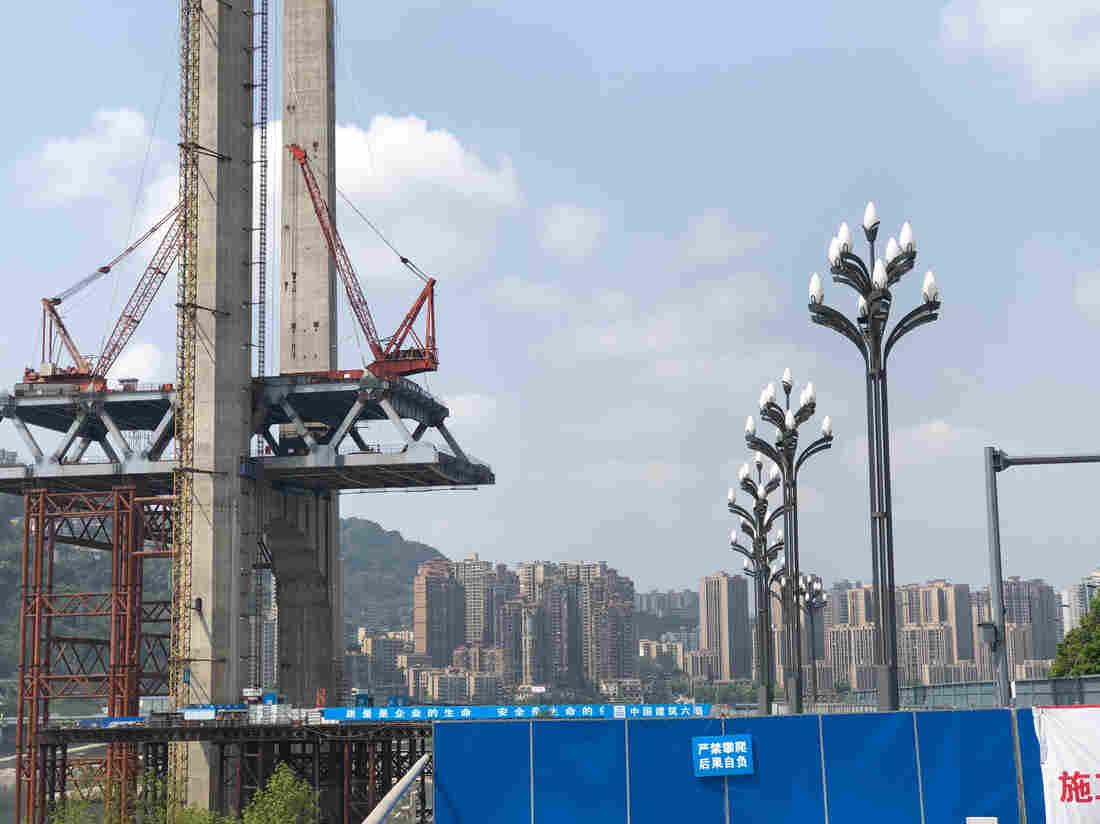 Chongqing's growth has been powered by massive investment. The construction of this Hongyan Village bridge began in 2012 but has been held up by lack of funding. Rob Schmitz/NPR hide caption 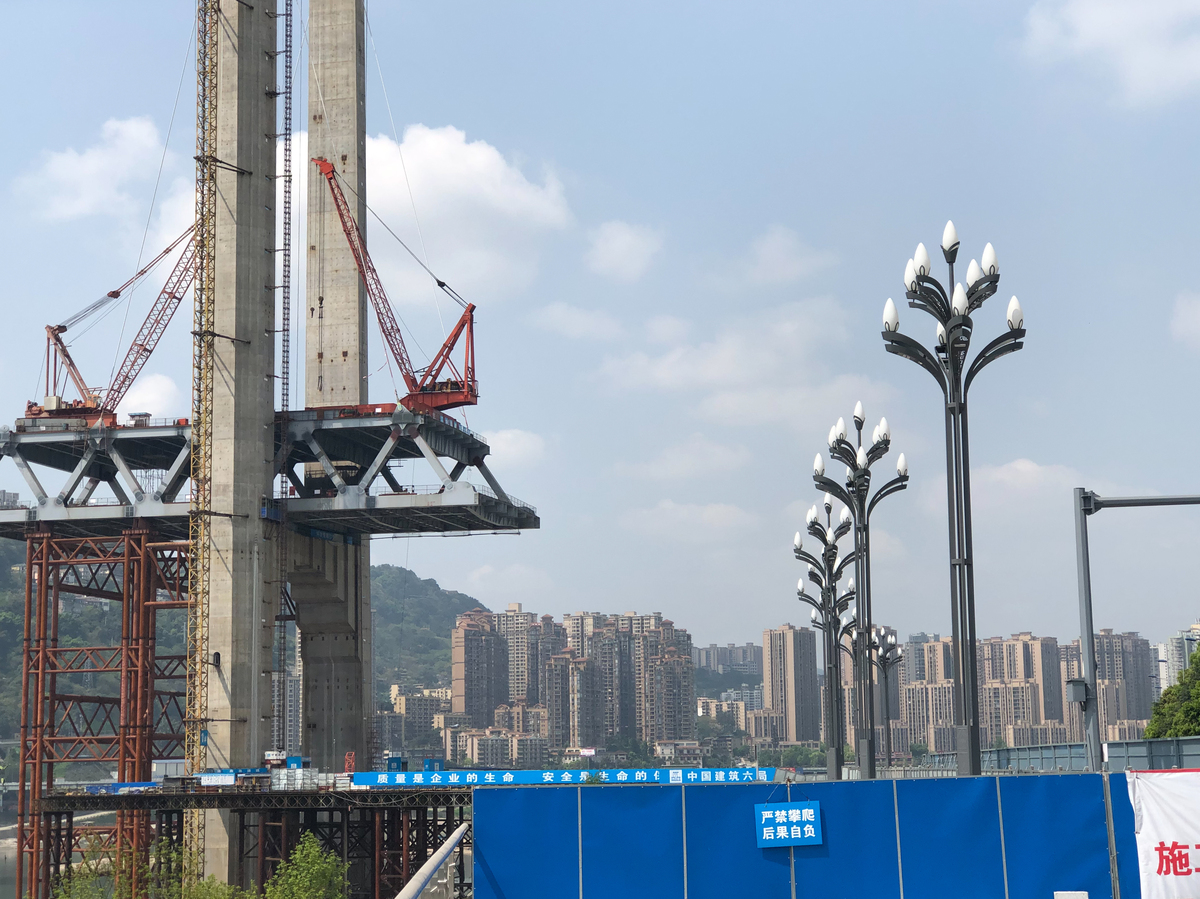 Chongqing's growth has been powered by massive investment. The construction of this Hongyan Village bridge began in 2012 but has been held up by lack of funding.

One city project moving ahead is slated to be Chongqing's highest structures: an eight-tower development that will soon become Raffles City Chongqing. It is set to become the tallest all-residential building in the world, rising 74 stories above an enormous shopping mall, according to Raffles City General Manager Vincent Wong.

Wong says that Raffles City's Singaporean developer sold 95% of the apartments in the first two towers three years ago, but when they opened a third residential tower last year, they only sold 35% of it.

To make way for the project, the city destroyed much of the city's emblematic wharf where boats traditionally stop on their way up the Yangtze.

Chongqing is famous for its street porters, known as "bangbang," meaning "stick-stick" men — freelancers who use bamboo sticks to carry heavy objects up from the wharf. The development project put hundreds of them out of work. 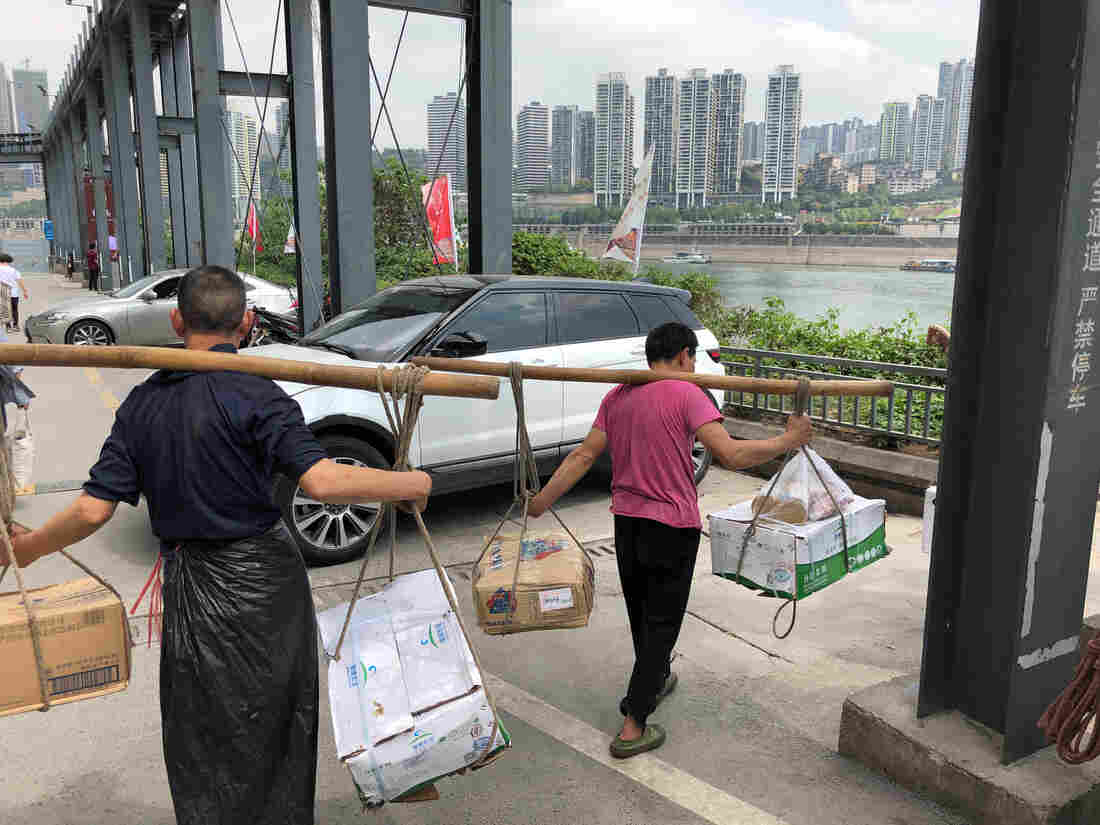 Many of Chongqing's street porters known as "bangbang" — which means "stick-stick" men — were displaced amid the city's large-scale development. Rob Schmitz/NPR hide caption 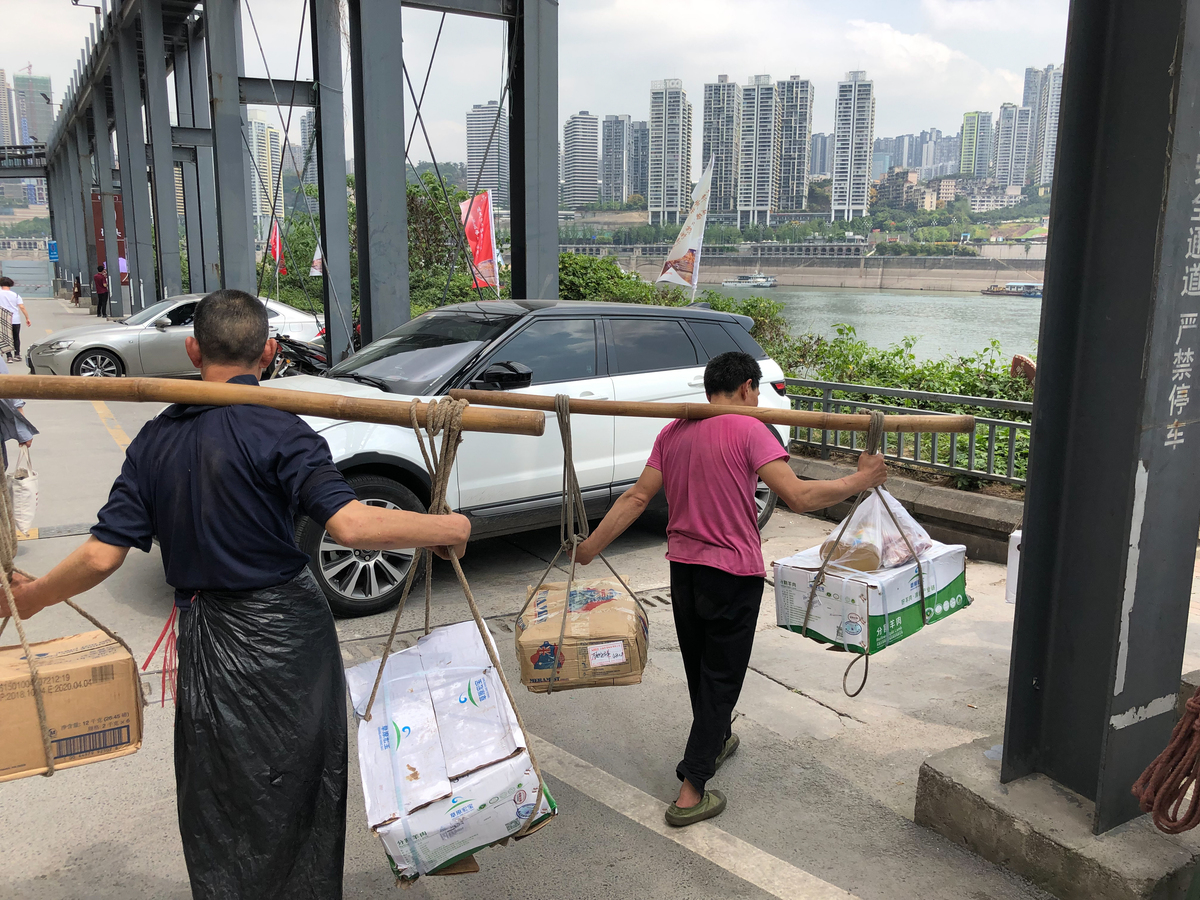 Many of Chongqing's street porters known as "bangbang" — which means "stick-stick" men — were displaced amid the city's large-scale development.

Not so for Zhang Peiqing, 68, who has worked as a porter in the city for more than two decades, and lived through its ups and downs. "The country is better than before," Zhang says. "But it would be even better if Bo Xilai hadn't been taken down."

This is a sensitive topic, but it is whispered by many here: Bo Xilai, Communist Party secretary of Chongqing at the height of the city's boom a decade ago, was a potential candidate to lead China. He was removed from his post in 2012 in a corruption investigation that paved the way for President Xi Jinping to become China's leader the following year.

"If Bo were in Xi Jinping's role, foreigners wouldn't dare bully us like they do now," says Zhang. "The economy's been paralyzed since he left."

Whether it's from Bo's untimely departure, foreign bullying or just simple economics, a car salesman who only gives his surname Zhou says the economy has never felt this bad. "It's the same everywhere in the nation," he says from an empty car showroom. "We're all in this together."

Zhou sells SUVs made by Bisu, a Chinese car company in the city of Hechuan that has laid off much of its workforce due to poor sales. "I used to sell between one and two dozen cars per month," remembers Zhou. "Now I'm lucky if I sell one."

That's a tough reality for a salesman working on commission, so he's found another job to support his family.

Yet it's a fortunate outcome compared to that of a colleague who only gives his surname Zhang. The 40-year-old electrician for Yinxiang Group, the parent company of the SUV brand Bisu, is among the last remaining workers for the company in Hechuan.

"They haven't paid our salaries for a couple of months now," complains Zhang. "When workers protested, the company fired all of them. They punish whoever says anything bad about the company."

And that's why Zhang doesn't give his full name. He says the boss of Yinxiang Group owns residential towers in Hechuan. Many of the families who live there were forcibly moved off their land to make way for the company's two auto factories, which now stand empty.

Yinxiang Group representatives hung up each time NPR called requesting an interview, but according to the company's website, it has spent nearly $2 billion on a development in Hechuan named "Yinxiang Town" that is filled with condos, hot springs and entertainment complexes.

Zhang says employees at Yinxiang Group are perplexed that the company is still eagerly building this development behind rows of empty factories. "Meanwhile they're not paying us," he says. "The factory isn't running. Yet here they are, still building."

For the time being, says Zhang, he'll keep working in the hopes that someday he'll be paid again after going without a paycheck for months. He says he can't afford to quit.