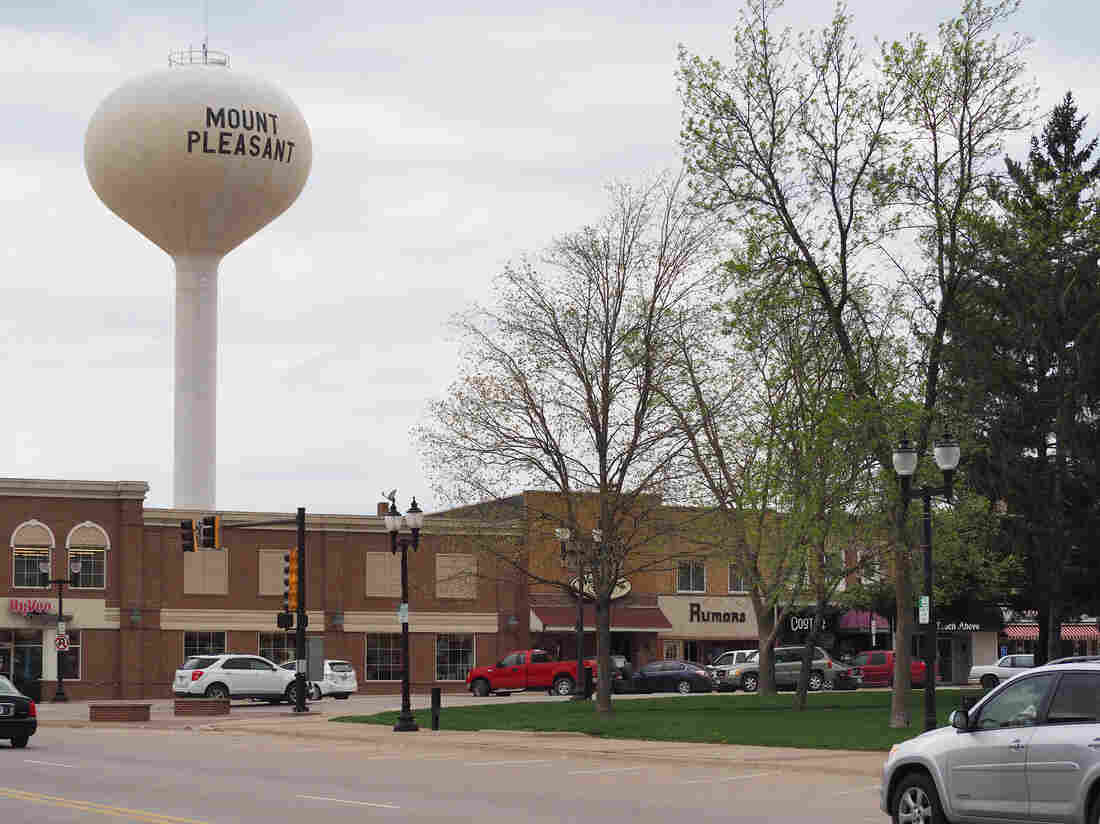 A lot of Iowa business owners in towns like Mount Pleasant are facing chronic labor shortages. One solution is to encourage more outsiders to come to the state, including immigrants. Jim Zarroli/NPR hide caption 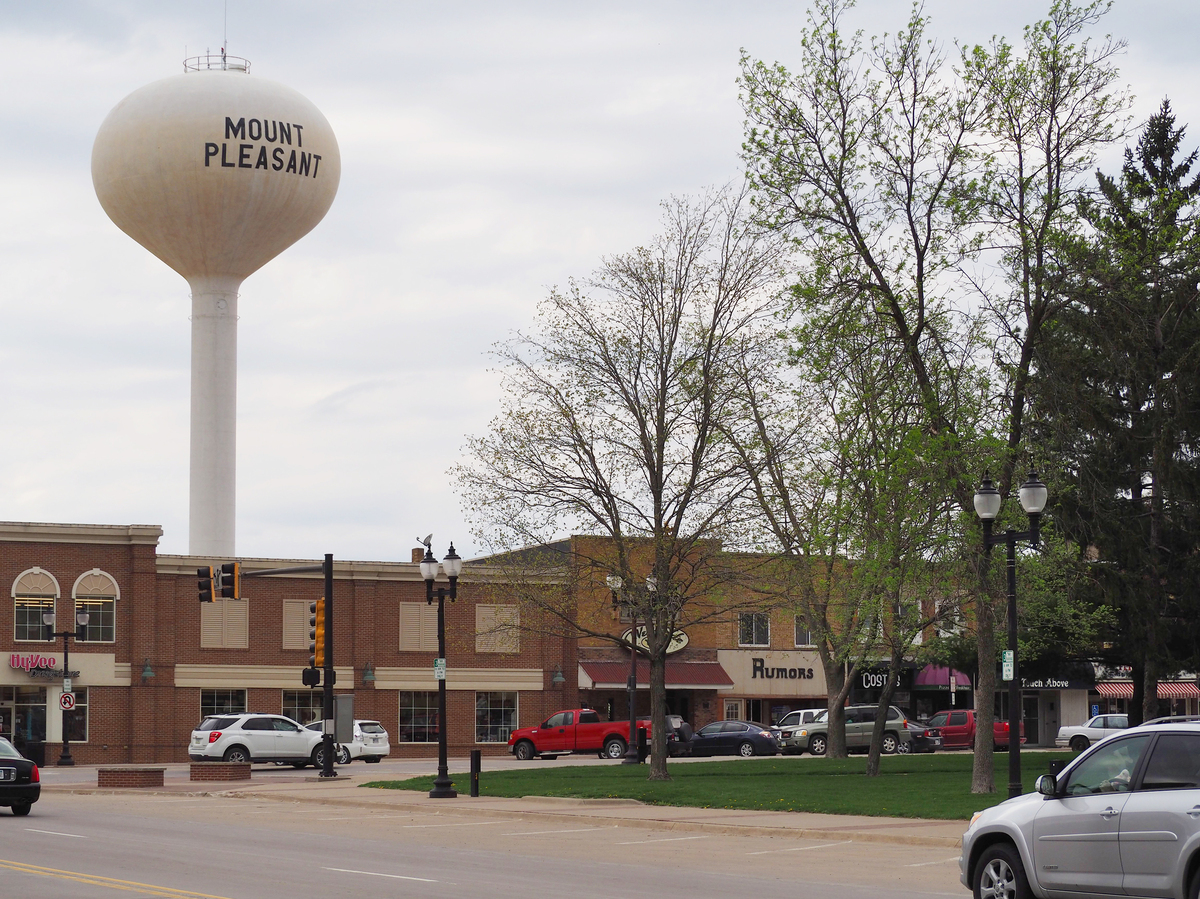 A lot of Iowa business owners in towns like Mount Pleasant are facing chronic labor shortages. One solution is to encourage more outsiders to come to the state, including immigrants.

One morning a year ago, federal immigration agents swept into the Midwest Precast Concrete plant in Mount Pleasant, Iowa, and arrested 32 men who were working there illegally.

"I was in the car eating when all of a sudden they all arrived," one worker tells NPR. "They took me out of the car and put handcuffs on me and on everyone else too. They even had a dog." The worker did not want his name used because his case is being heard by a judge.

His plight is at the center of an immigration debate — and an economic problem — in this Iowa community and nationally. Mount Pleasant is in Henry County, where the 2.3% unemployment rate is so low that employers are struggling to fill 300 open jobs.

At the same time, the concrete worker and many of his co-workers from Mexico and Central America, who were arrested last year, are waiting for deportation hearings and are not permitted to work legally.

He feared "losing everything," he says. "My family, my job, years of sacrifice and work."

For Ted Wiley, hiring workers for his small, family-owned construction company in Mount Pleasant is something of a gamble.

Good employees are so hard to find that Wiley can never be sure whether new hires will show up for work, even though he's willing to train them and pays what he considers a decent salary.

"It is so hard to get people in the door just to sit down and interview," Wiley says. "You're afraid you're going to scare them off. Any little thing that you do, they won't show up for the first day of work."

Like a lot of business owners in Iowa, Wiley says one solution to the chronic labor shortage is to encourage more outsiders to come to the state, including immigrants. 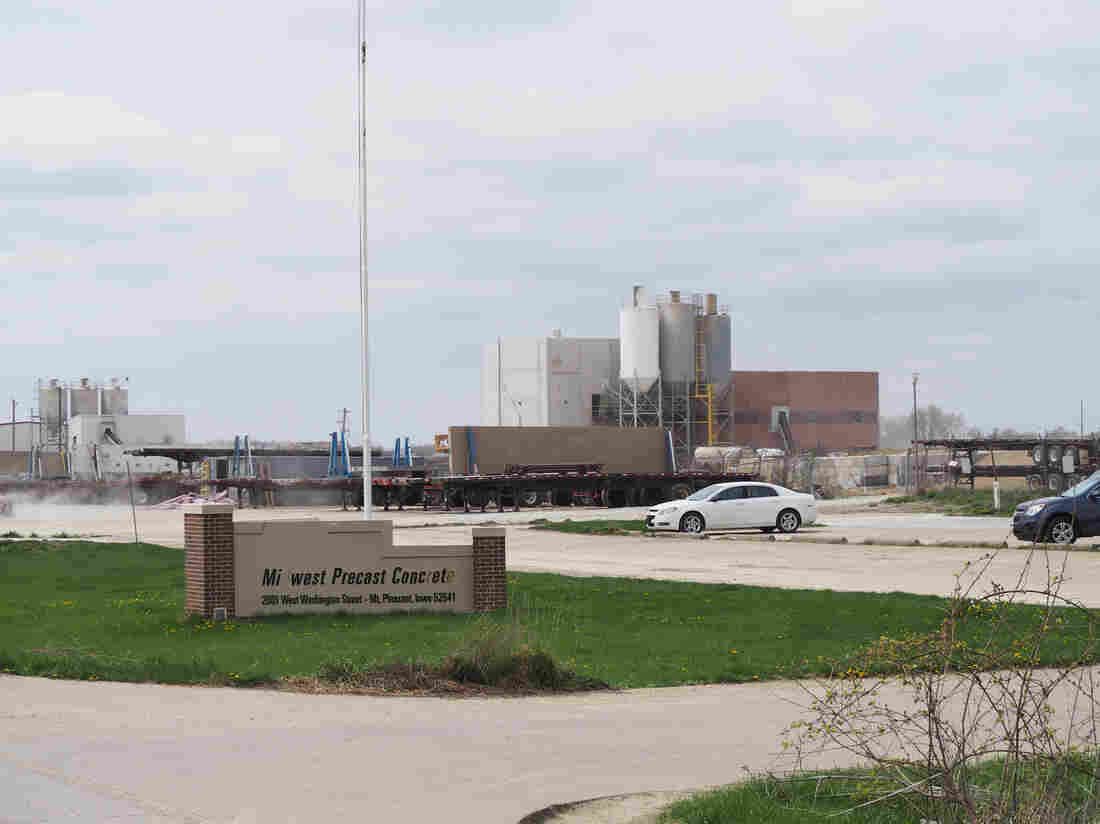 On May 9, 2018, agents from U.S. Immigration and Customs Enforcement swept into Midwest Precast Concrete and arrested 32 men from Mexico and Central America who were working illegally. Jim Zarroli/NPR hide caption 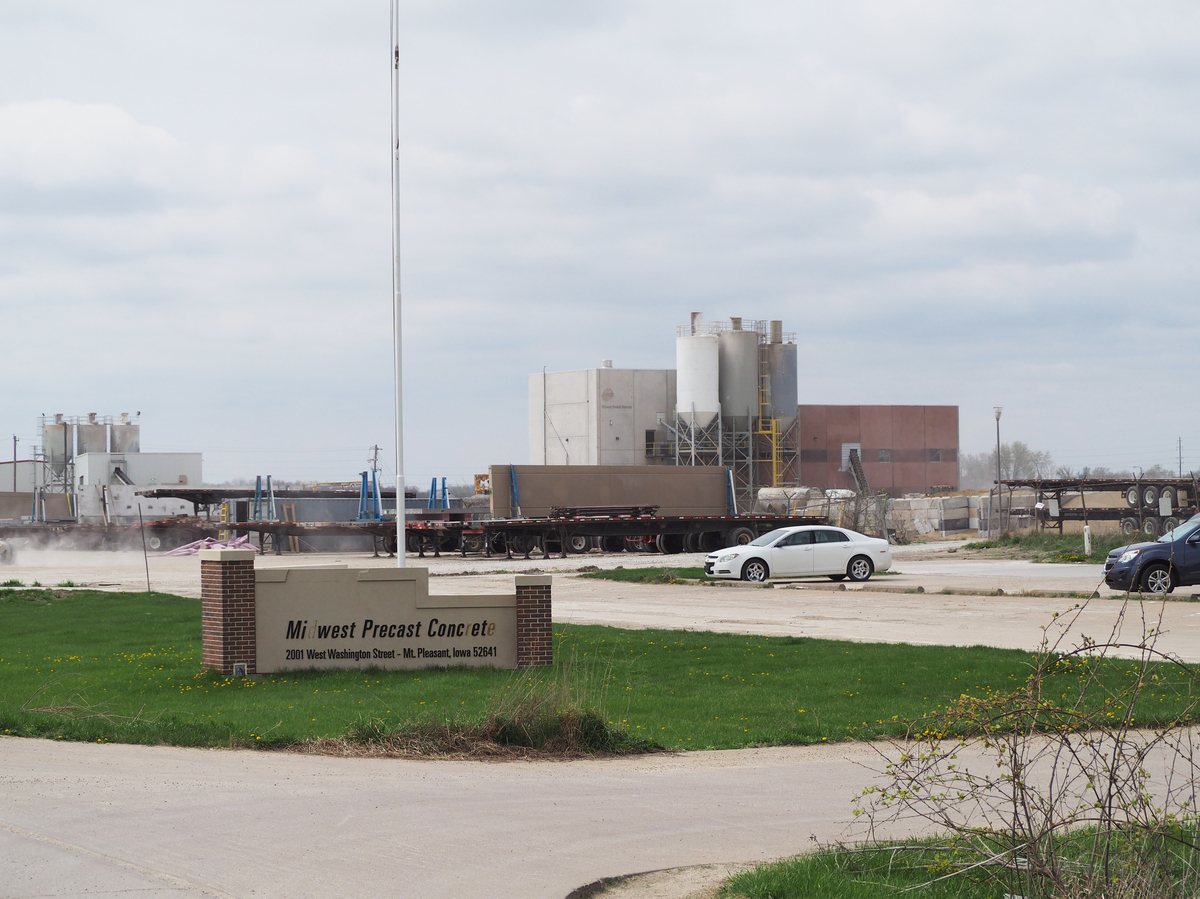 On May 9, 2018, agents from U.S. Immigration and Customs Enforcement swept into Midwest Precast Concrete and arrested 32 men from Mexico and Central America who were working illegally.

"I don't doubt that there are immigrants that get into the country that shouldn't be here. There's no question about that," Wiley says. "I know that there are a lot that come in that are just here for a better life for their family — no different than any of the rest of us. As far as I'm concerned, we've got room for them."

It's a controversial position throughout Iowa, where the state has passed legislation aimed at discouraging illegal immigration. It's also home to some of the most vociferous critics of illegal immigration, including Republican Rep. Steve King.

The immigration raid last year ignited a debate in Mount Pleasant about who should be allowed into the community and who was to blame for what happened. Was it the men, for working illegally, or the company, for hiring them?

A food pantry was set up at First Presbyterian Church to help feed the men and their families. Rallies were held in support of the men, and a local immigration group called Iowa WINs chipped in to help them financially.

But some Mount Pleasant residents "hardened their hearts" against the men, says the Rev. Trey Hegar, the church's pastor.

"There were people who said, 'Well, that's what you get.' If you're here illegally or undocumented, there was little compassion or understanding for that," he says. 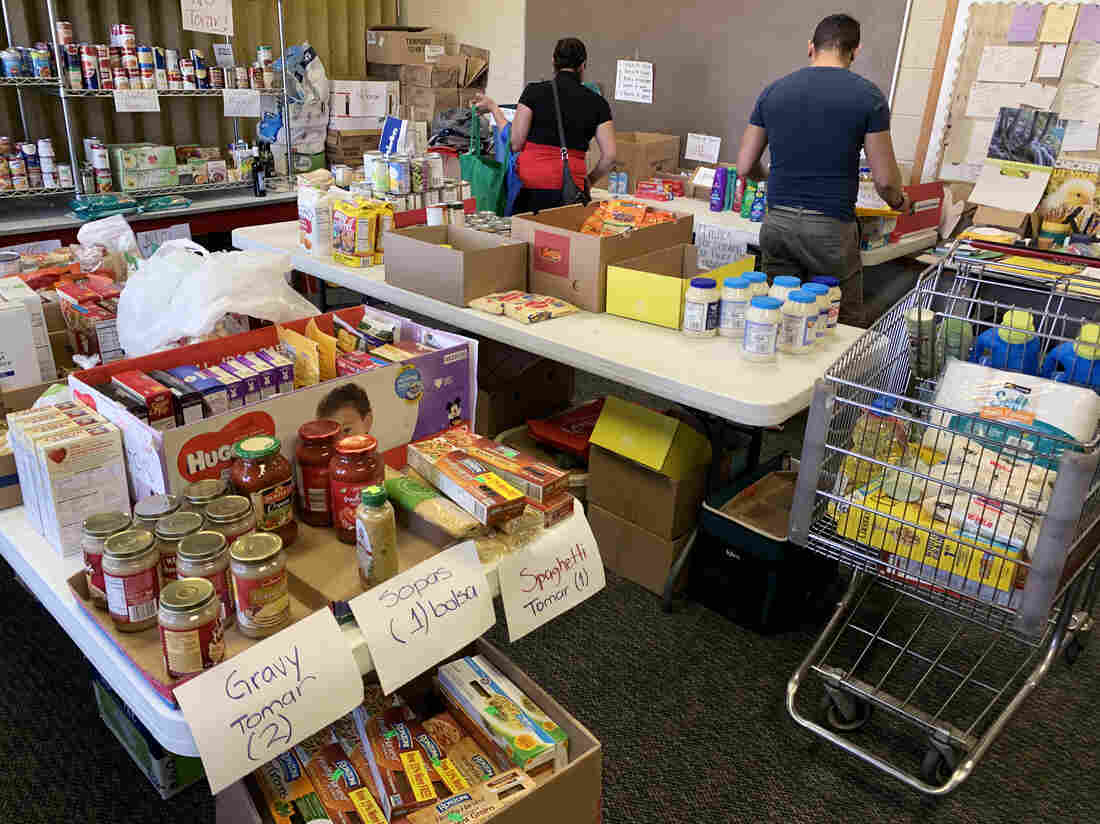 A food pantry was set up at First Presbyterian Church to help feed the men, who aren't permitted to work legally, and their families. Jim Zarroli/NPR hide caption 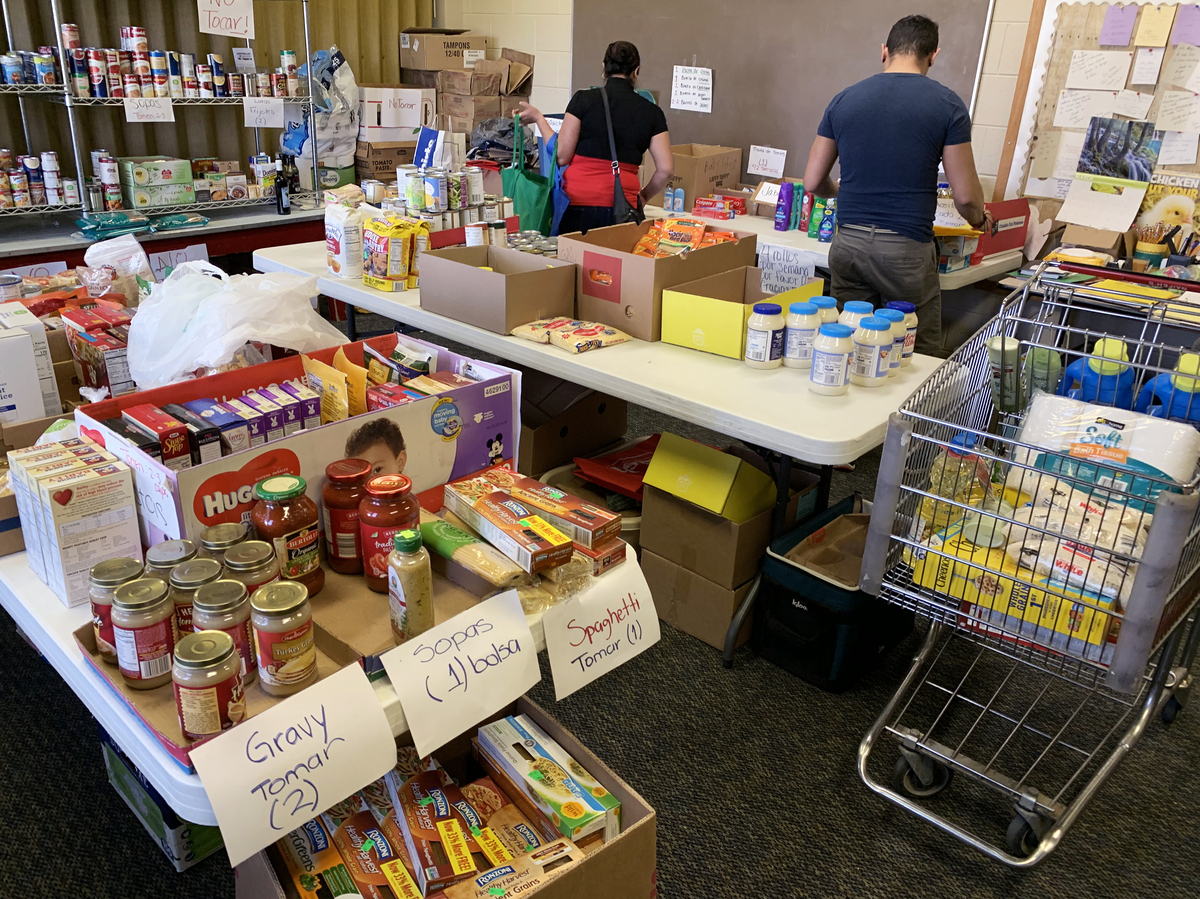 A food pantry was set up at First Presbyterian Church to help feed the men, who aren't permitted to work legally, and their families.

Some locals say they have no problem with people coming to Iowa from other countries. They just don't like illegal immigration. They suggest that businesses pay more to lure native Iowans into the workforce. Many believe companies want to hire immigrants for the wrong reasons.

"It's just because they can pay them less money to work the same amount of hours or more," says Chelsea Sammons, who works part time at a convenience store. Sammons says that when she applies for full-time jobs in the area, she often never hears back from anyone.

The debate in Mount Pleasant mirrors one taking place throughout Iowa, which has one of the lowest unemployment rates in the United States.

Many business leaders worry that voices like King's send a message that Iowa doesn't want immigrants.

In February, business leaders formed the Iowa Compact on Immigration, a group aimed at underscoring the positive role that immigrants can play in the state's economy. The leaders say bringing in people from other countries can bring a new vibrancy to the state. Iowa hasn't traditionally attracted a lot of outsiders, at least in recent years.

But such arguments are swimming against the political tide in Iowa, where opposition to illegal immigration remains strong.

One bill, passed by the Iowa Senate, would require employers to use E-Verify, the voluntary federal program for checking the immigration status of new hires. And the legislature passed a bill banning sanctuary cities for undocumented workers.

State Sen. Julian Garrett, who sponsored the E-Verify bill, says he understands that Iowa is short of workers. He says the state has taken steps to encourage native Iowans who don't hold jobs to return to the workforce.

He says he's not opposed to immigration — as long as it's legal.

"If you're an honest employer, if you obey the law, and your competitor down the street is violating the law, hiring people who are here illegally," Garrett says, "that's not fair."

"Who's to blame? The guy that bought the illegal Social Security number? They wanted to go to work. They wanted to take care of their family. The company needs workers. That's why immigration is such a hard issue," she says.

Ray has traveled to Washington with other business leaders to encourage lawmakers to try to address the problem employers are having.

Meanwhile, many of the men arrested last year at Midwest Precast Concrete remain in the area, awaiting their deportation hearings.

If the worker who didn't want his name used is deported to Mexico, his wife says she's prepared to follow him.

"I've lived in Iowa all my life," she says. "My kids were born here in Iowa. But, so my kids aren't separated from their dad, we will do what we have to do to be with him."

The men arrested last year are caught in a kind of Catch-22. If they return to their home countries before their hearings, they forfeit their bonds and are considered felons under U.S. law.

But because they're not allowed to work legally, they have no way of supporting themselves. They're getting by with the help of local churches and a pro-immigration group.

And so the worker who didn't want his name used spends much of his time these days sitting at home waiting, even though plenty of employers in the area are begging for applicants.