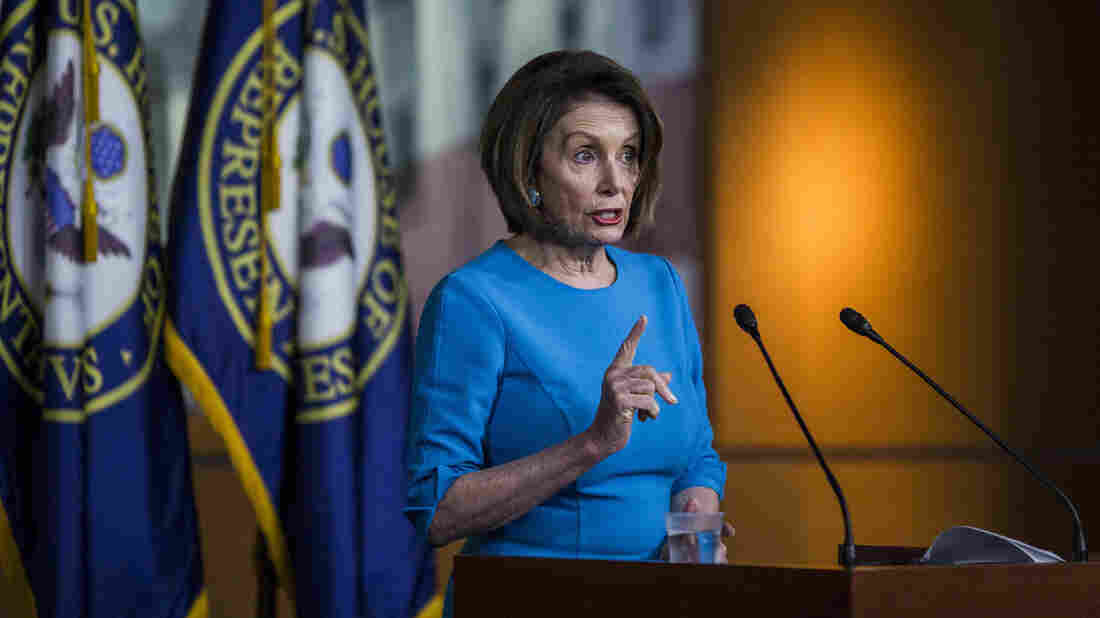 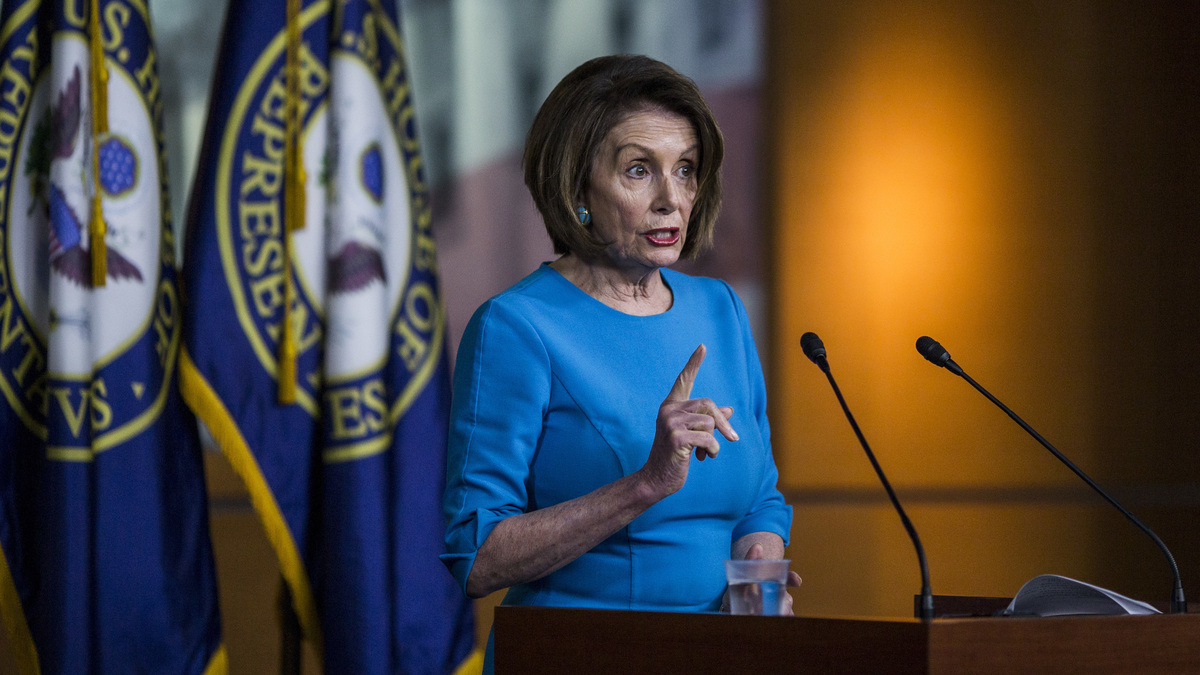 House Speaker Nancy Pelosi, D-Calif., speaks during a weekly news conference on May 16 on Capitol Hill. Pelosi is dealing with rising calls for impeachment proceedings against President Trump.

House Speaker Nancy Pelosi will convene a meeting Wednesday morning to hear from Democrats on whether to move forward with impeachment proceedings against President Trump.

Pelosi, a public skeptic of impeachment, is confronting a rising tide of support for it among rank-and-file House Democrats and members of her own leadership team. Democrats are outraged by the Trump administration's ongoing effort to stymie congressional oversight into the president, his administration, and the findings in special counsel Robert Mueller's report.

"She's hearing the views of the caucus, and listening to different perspectives and we're having that debate," said Rep. Seth Moulton, D-Mass., who is running for president. Moulton supports opening an impeachment inquiry based on the argument being made by a number of Democrats that it gives the House a stronger legal hand in securing documents, testimony and cooperation from the Trump administration.

"I don't think there's any question but there's a growing realization in the caucus that impeachment is inevitable. It's not a question of if but when," said Rep. John Yarmuth, D-Ky., a member of the leadership's whip team. Yarmuth said the administration's "blanket resistance" to their oversight efforts is changing the calculation. "I think the speaker is right that these investigations need to go on. I don't think they should go on interminably," he said, adding that he expected a decision on impeachment to be made by the end of the summer.

Yarmuth and other top leaders have characterized those pushing for impeachment as a small but growing minority dissatisfied with Pelosi's focus on traditional committee investigations. The group largely confined their frustrations to closed-door sessions until recently.

"I think what is happening is that the initial aim was to investigate and then see what we had. The problem is we can't get any information. The president is blocking us," House Oversight and Reform Committee Chairman Elijah Cummings, D-Md., said. "I think we're in a position where we're moving more and more towards [impeachment] because he's not leaving us with any choices. You don't have any choices."

Cummings maintained that moving ahead with impeachment could assist their efforts. "Once you file for impeachment you're under a whole new different set of rules. And you have a much broader opportunity to get things."

Rep. David Cicilline, D-R.I., a member of the Judiciary Committee and party leadership who supports moving forward with impeachment, said "the principal reason" to do so was to send a message to the administration and the public. "There's no question that opening impeachment conveys to all the relevant parties the seriousness of the inquiry. I think we still have the ability to get all the documents and the witnesses that we need under our traditional oversight responsibilities," he said, adding, "It's important to communicate a very strong message to the administration, and opening a formal inquiry is a good way to communicate that message."

House Democratic Caucus Chairman Hakeem Jeffries, D-N.Y., downplayed the internal turmoil, telling reporters Tuesday: "I disagree with the notion that a growing number of the House Democratic Caucus want to jump straight to impeachment," he said. However, he said, Democrats have a "responsibility to serve as a check and balance on an out-of-control executive branch."

Trump's latest efforts to block former White House counsel Don McGahn from testifying Tuesday before the House Judiciary Committee, and McGahn's refusal to appear, are the latest affront to Congress prompting Democrats to reconsider their strategy. "We will hold this president accountable, one way or the other," Judiciary Chairman Jerry Nadler, D-N.Y., said at the hearing.

Citing executive privilege, the administration has also blocked congressional demands for an unredacted copy of Mueller's report, which Attorney General William Barr declined to deliver to the Judiciary Committee. Barr was held in contempt by the committee, but a full House vote is not yet scheduled.

On another front, the administration is refusing to comply with Ways and Means Chairman Richard Neal's request for six years of the president's tax returns, which tax law gives the chairman legal authority to access.

House Financial Services Committee Chairwoman Maxine Waters, D-Calif., one of the first House Democrats to call for Trump's impeachment, said those tactics from the administration are accelerating the impeachment push.

"I think many members are a little bit shocked and surprised that the president would be this blatant in instructing those in the administration and outside the administration not to come and testify," Waters said. "I think what he's trying to do and I think what they think he's trying to do is render us toothless and say we're not that important."

While Democrats are waging the battle against the administration in the courts — and the courts have historically favored Congress in these cases — it can take months or years to reach final legal conclusions, and Democrats believe Trump is using these court fights as a delaying tactic to get past the 2020 elections.

House Democrats did score a significant legal victory on Monday when federal Judge Amit Mehta ruled that an accounting company, Mazars, must comply with a subpoena issued by Cummings. Trump said hours later that there would be an appeal, and on Tuesday morning papers were filed to continue that fight.

Waters said she was pleased that the judge agreed with the Democrats' argument in that case, but that process would be lengthy and does not absolve Congress from its responsibility to act.

Politically, Democrats remain in the same bind. Pelosi's stated threshold for "overwhelming and bipartisan" support to move forward with impeachment hasn't budged. While most Democrats want impeachment hearings to begin, the idea is still unpopular overall, according to the latest NPR/PBS NewsHour/Marist Poll.

"What about just doing the right thing?" Moulton said, when asked about the political calculus for Democrats.

That question is causing anxiety among some members ahead of the coming Memorial Day break. Some worry they will face angry constituents who want proof that Democrats are holding Trump accountable while still delivering on promises to create jobs and improve health care.

The tension has created a political headache for people like Cicilline, the head of the Democrats' messaging team.

"I think delivering on those promises to improve the economic lives of the American people is our first priority," Cicilline said. "I think Democrats are also united that we need to hold this administration accountable and that we need to demonstrate that no one in this country, including the president, is above the law. While there might be some different ideas about what's the best vehicle to do that, we are united on those principles."