Accessibility links
Gayle King Is A Rising Star At CBS CBS's Gayle King is having a moment at a time of scandals and ratings struggles at the network. She has emerged with a hefty new contract and a new team as the new CBS This Morning debuted Monday. 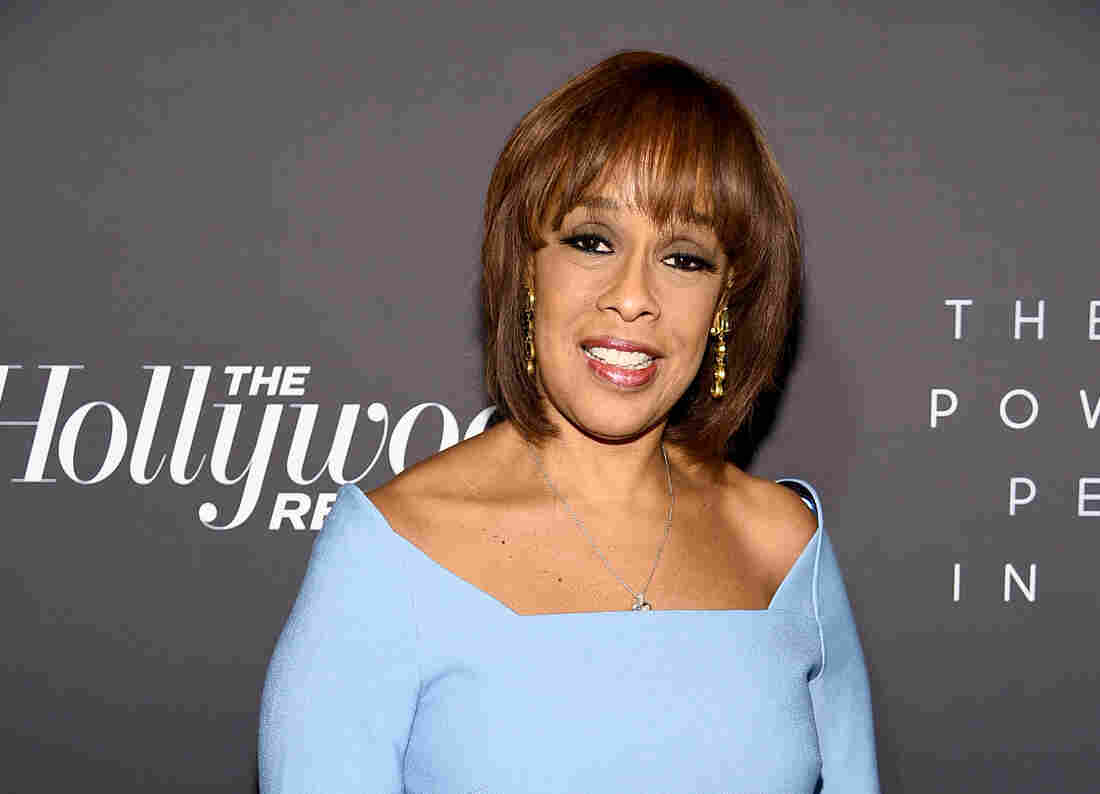 Gayle King attends the the Hollywood Reporter's 9th Annual Most Powerful People In Media at The Pool on April 11 in New York City. Theo Wargo/Getty Images for THR hide caption 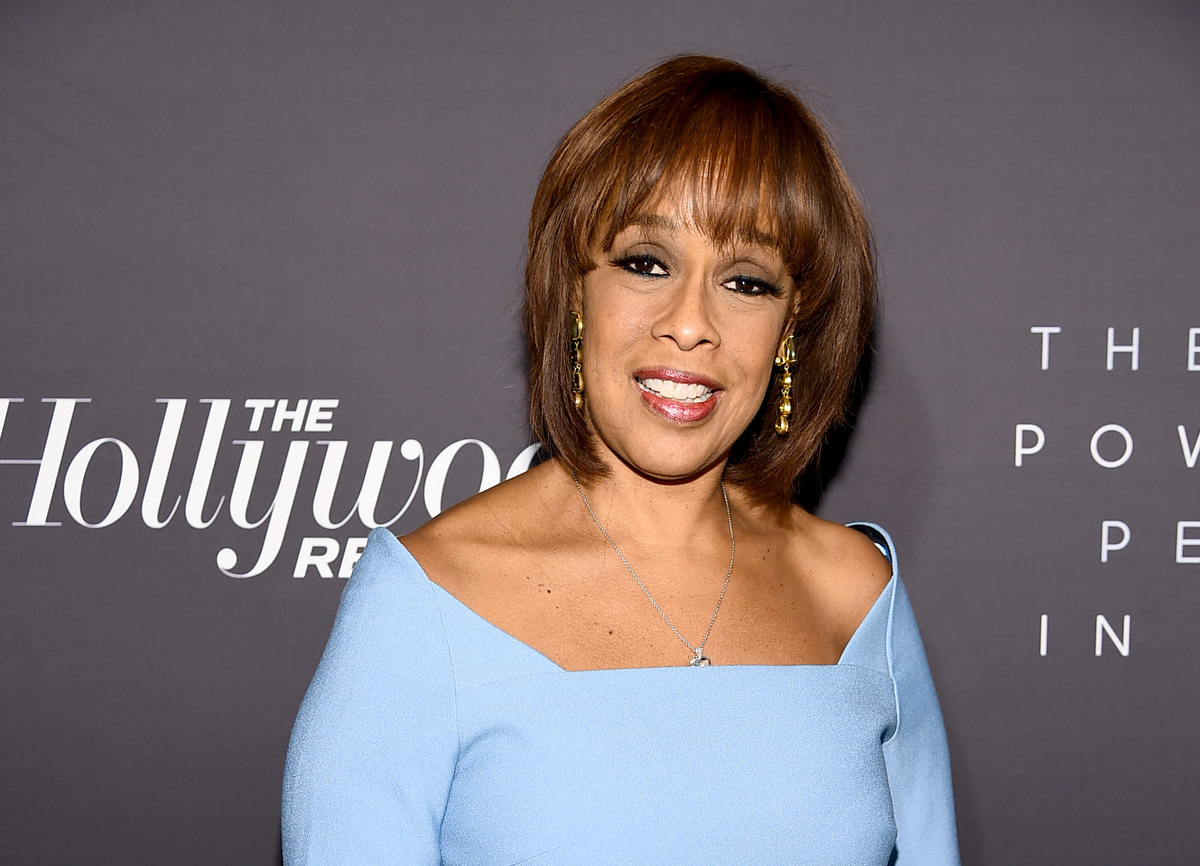 Gayle King attends the the Hollywood Reporter's 9th Annual Most Powerful People In Media at The Pool on April 11 in New York City.

Gayle King is an overnight sensation decades in the making.

CBS first hired the veteran local news anchor seven years ago and is now set to lean on her even more heavily.

At a time of scandals and ratings struggles for CBS, King has emerged with a hefty new contract at CBS News. She is now featured center stage of a new team for the re-imagined CBS This Morning, which made its debut this week. And she is to play an even more central role for the network's news division.

"My advice is always the same to everybody: Just go on and be yourself," King says in an interview conducted for NPR's On Point. "The audience can always tell if you're faking it. I don't like that fake happy talk banter that I see some people do. If you don't have anything to say about something you don't have to speak."

King is not known for keeping her thoughts to herself.

When then-House Speaker Paul Ryan, a Republican, gave King an interview the day after announcing he would step down, she pressed him on a photo taken with President Trump and Republican leaders. "Mr. Speaker, I have to say, I don't see anybody that looks like me, in terms of color or gender. So when I look at that picture I have to say, I don't feel very celebratory. I feel very excluded."

"Well, I don't like the fact that you feel that way," Ryan said, clearly thrown off guard. "I've been focusing on that kind of recruitment."

And King can also project serenity amid intensity, as she did in an interview with a bombastic R. Kelly, who is facing multiple criminal charges of sexual abuse. When the musician rose from his seat to end the interview, after facing her tough questioning, King repeated Kelly's given name, Robert, in an effort to get him to sit back down.

"I did not want him to leave in the middle of the interview. So I thought if I just sat there and if I just said his name — I made eye contact with him and eye contact with the chair — it would send a subtle message to him that I'm not going anywhere." The tactic worked and the exchange went viral.

The 64-year-old King is one of the most prominent African Americans in broadcast news. Yet for most of the past few decades, she has been defined in relation to others.

During a stint as a junior producer at WJZ-TV in Baltimore, King befriended Oprah Winfrey, then a young anchor. The two have been friends in the decades since. (Winfrey once called King "the mother I never had ... the sister everybody would want" in an interview with ABC's Barbara Walters.)

King's ascent began years ago. She had been a host in local news for years and had a recurring gig on MSNBC's Morning Joe before CBS first sought her out in 2012.

When she was named as a co-host of CBS This Morning, King was seen as a complement to Charlie Rose, around whom the show was created to take on Good Morning America and Today. (A previous version was not considered successful.)

CBS had embraced a strategy in its morning programming of reemphasizing hard news. That role fell to Rose, in the 7 a.m. hour of the show. King's role, initially, was to follow by leading a softer 8 a.m. hour.

King offers blunt talk even about her own network, as she did in late 2017 when The Washington Post published multiple accusations of sexual harassment against Rose, her then co-host. The network fired him.

"I really am still reeling," King told viewers the next morning. "I got one hour and 42 minutes of sleep last night. ... I am not OK."

King told viewers that Rose remained her friend and that at the same time, she was sickened.

"The women who have not spoken up because they were afraid — I'm hoping that now they will take the step to speak out too, that this becomes a moment of truth," King said on the show.

Earlier this month, O'Donnell was named the chief anchor of the CBS Evening News. And Rose's replacement, John Dickerson, heads to 60 Minutes to become a full-time correspondent.

King said gracious things about both colleagues — each of whom is headed to a plum position. But she veered off script to say uncomfortable truths about her network.

"This is a business about ratings," King said after helping to announce those shifts. "And when the ratings don't work, they make changes. And they're making changes that they hope lead to better things."

King's new co-hosts are Saturday morning show host Anthony Mason and correspondent Tony Dokoupil. Dokoupil says CBS's show will retain an emphasis on harder news and more storytelling than its peers at ABC and NBC. He took particular aim at Rose's famed glad-handing of celebrities, diplomats and heads of state off the air.

"I'm not interested in tinking champagne glasses with everybody who I have on as a guest — and Charlie [Rose] had lapsed into that at the end, unfortunately," Dokoupil tells NPR. "When journalism needs to be adversarial, and some would say it always does, I'm a lot more willing than Charlie Rose was at the end to do that." (Rose declined to comment to NPR about Dokoupil's remarks.)

Ratings faltered after Rose's firing. They were also lagging for the CBS Evening News with Jeff Glor, who only took the job in late 2017.

The new president of CBS News, Susan Zirinsky, promised to shake things up, calling the move to elevate King on CBS This Morning a major part of the network's "reset."

"Gayle has made CBS a destination for exclusive interviews," Zirinsky says. "People trust her and want to speak with her about important, sensitive topics."

"We believe that you can tell the news, you can inform and — dare I say — entertain and have fun, without it being comedic," King says. "We like to call it news with a heart. I like that."