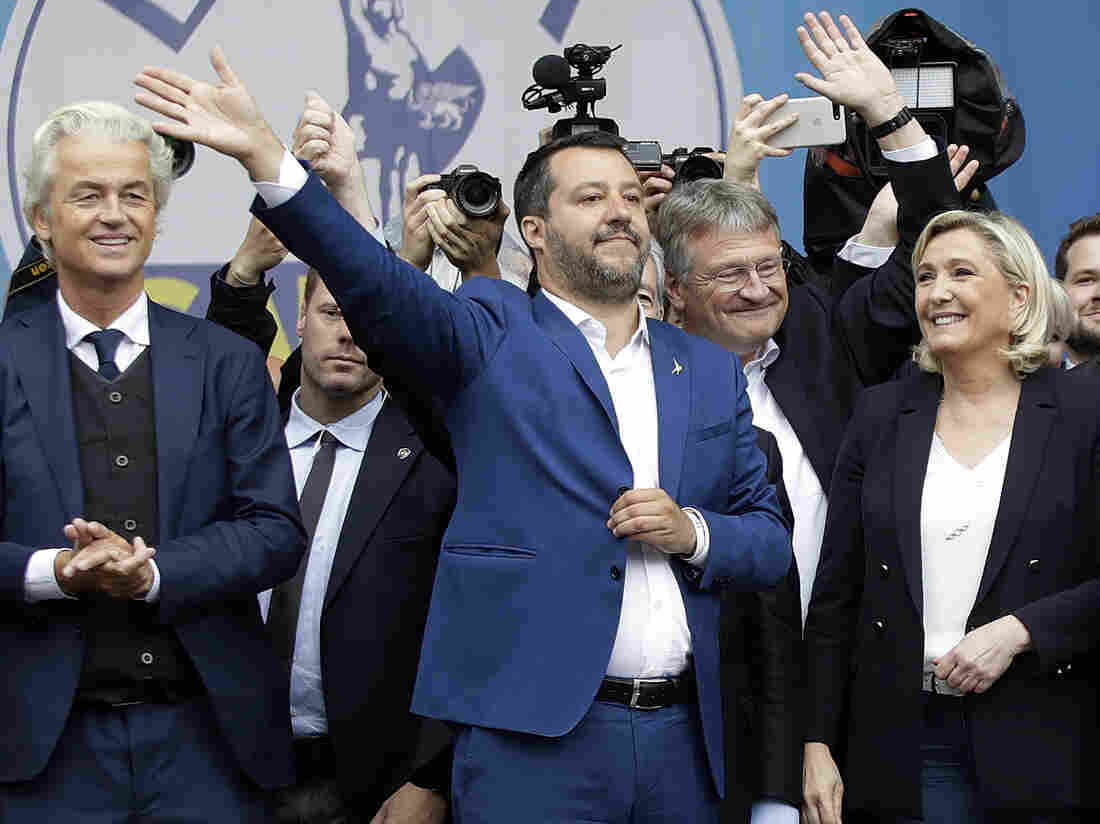 Matteo Salvini (center), flanked by European nationalist leaders, attends a rally ahead of the May 23-26 European parliamentary elections, in Milan on Saturday. Luca Bruno/AP hide caption 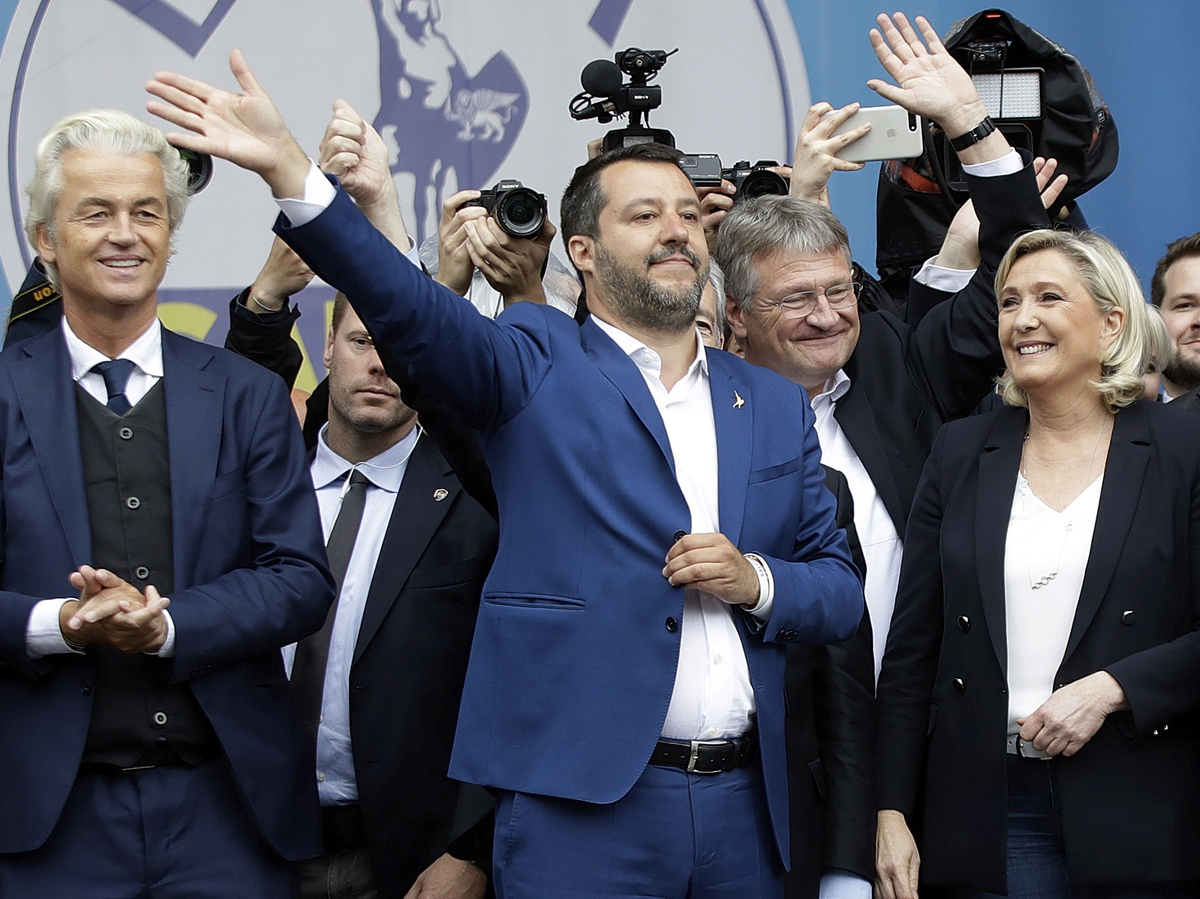 Matteo Salvini (center), flanked by European nationalist leaders, attends a rally ahead of the May 23-26 European parliamentary elections, in Milan on Saturday.

As a recording played the late tenor Luciano Pavarotti singing Puccini's Nessun Dorma aria, with its refrain of "Vincerò!" (I will win), Salvini took center-stage before a crowd of some 20,000 cheering fans.

Clutching a rosary and flanked by France's far-right leader Marine Le Pen and 10 other European ethno-nationalists, Salvini dismissed his critics. "In this square, there are no racists, no fascists," he said.

"The extremists are those who led Europe into insecurity and poverty — Merkel, Macron and Soros," Salvini said, referring to German Chancellor Angela Merkel, French President Emmanuel Macron, and Hungarian-American philanthropist George Soros, a frequent target of the far right.

"Italy is the most important place in the world politically right now, because [of] the League [and] the rise of Salvini," he told reporters in Rome during a visit in late March.

A close ally of Vladimir Putin's Russia and a master of social media, Salvini, 46, channels phrases by fascist dictator Benito Mussolini, such as when he tweeted on Mussolini's birthday last year, "So many enemies, so much honor."

Salvini's critics say he legitimizes words and behavior that have been taboo in Italy for decades, encouraging and enabling people to act in a manner that hasn't been tolerated since the end of World War II.

Last month in Milan, men wearing black — the color Mussolini's squads favored — hailed the dictator near the spot where partisans, who had executed him elsewhere, strung up his body in 1945.

Earlier this month in Sicily, authorities suspended a schoolteacher for her students' project comparing fascist laws against Jews to Salvini's anti-migrant decrees.

And in Rome this month, members of the neo-fascist CasaPound group harassed a Roma woman and her family who were being escorted by police into a public housing project. Video of the incident captured a 25-year-old skinhead shouting at her, "I will rape you, whore!"

Some commentators wonder if Italy is entering a new phase, "fascism 2.0."

"Salvini is selling fascist derivatives. He's not selling fascism — although he clearly winks and says things that those who need to understand, understand," says Claudio Gatti, the author of Salvini's Demons, a recently published investigation into the League's far-right ideological roots.

While Italy's neo-fascist activists are few, Gatti says, their message resonates with many. 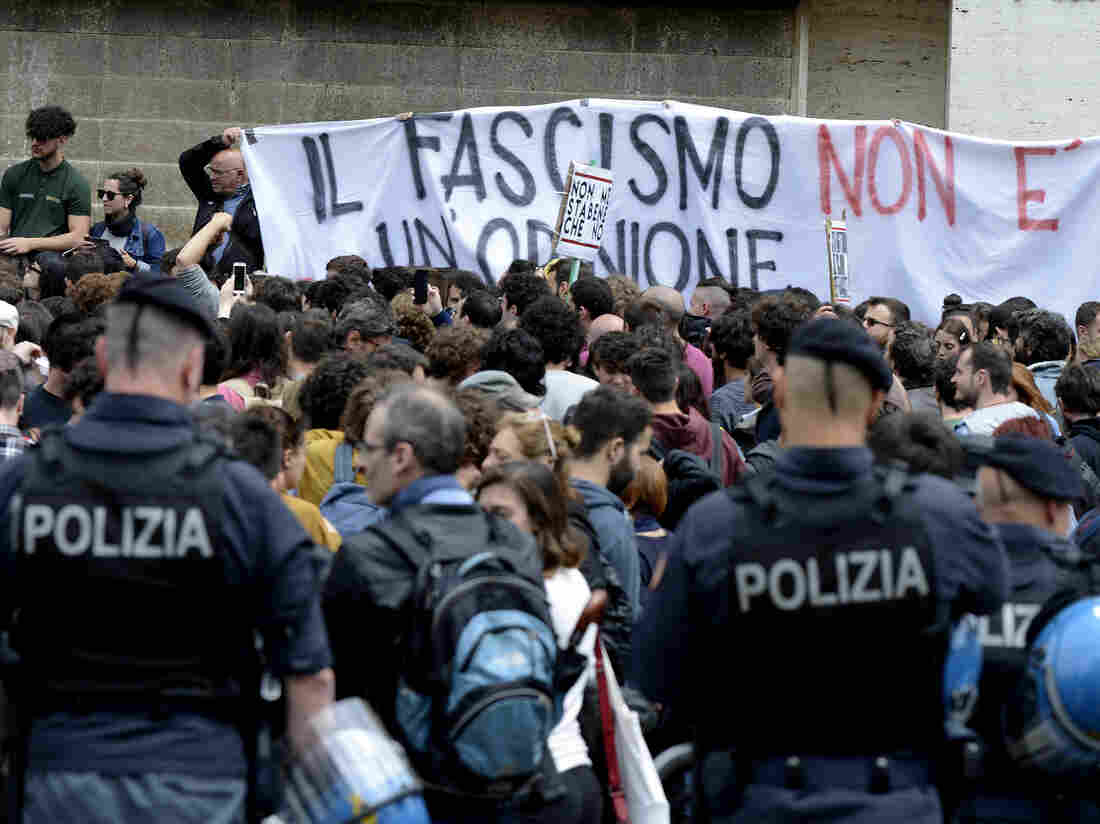 Students at Sapienza University of Rome hold a banner reading "Fascism is not an opinion" during a demonstration on May 13. Simona Granati - Corbis/Corbis via Getty Images hide caption 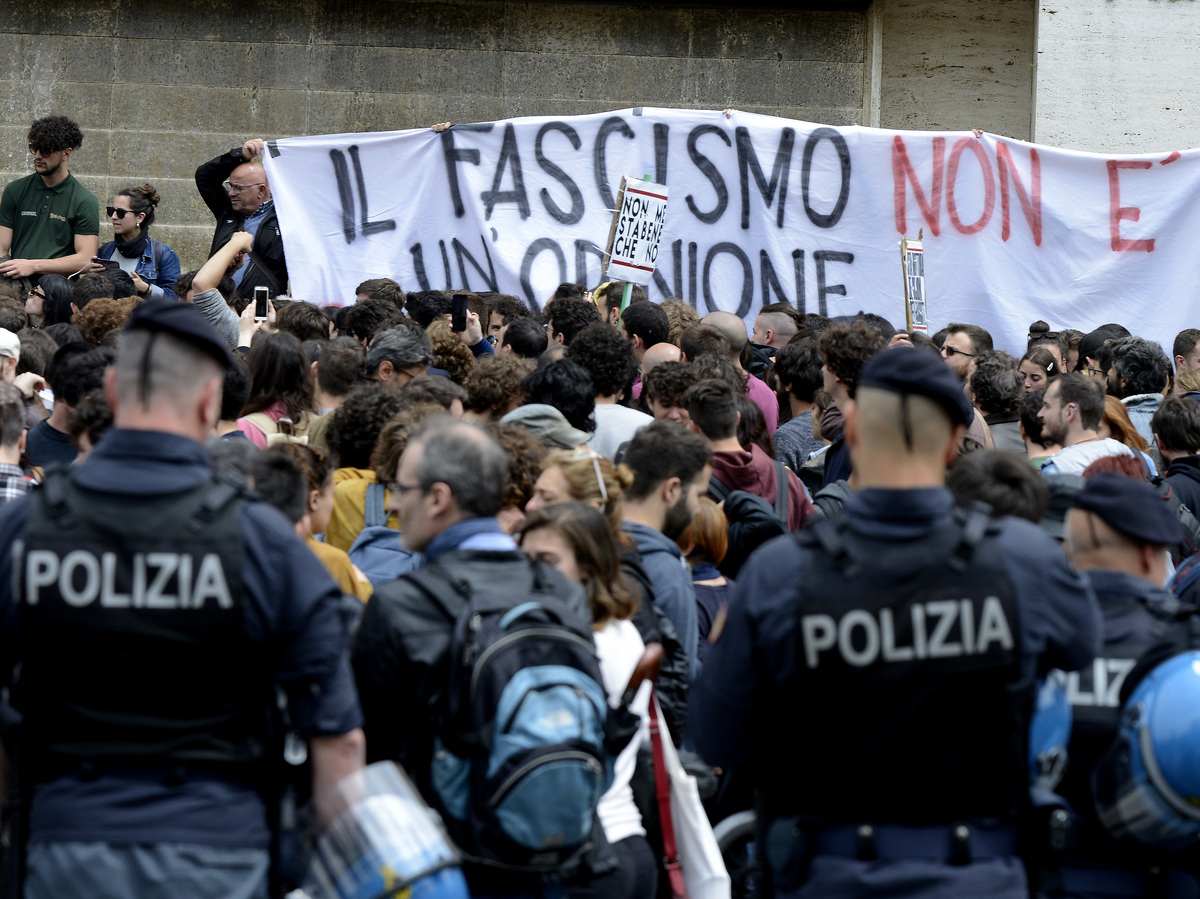 Students at Sapienza University of Rome hold a banner reading "Fascism is not an opinion" during a demonstration on May 13.

"People interested or willing to listen to authoritarian, xenophobic and even racist [ideas], in a new moment of great anxiety, despair, unemployment — those people are a significant number," he says.

A recurrent Salvini theme is what is known as the "Great Replacement" conspiracy theory, which he described this way in an interview with Italy's Sky TG24 news channel in May 2016:

"An effort at ethnic replacement is underway: well-financed organizations are importing thousands of new farm slaves, paid 3 euros an hour, to erase Italians living here. This is a lucrative attempt at genocide."

Gatti says these are dog whistles that echo U.S. white supremacists' anti-Semitic chants in Charlottesville, Va., and the anti-Islam manifesto for the New Zealand mosque attacks that killed more than 50 people in March.

But some Italians are pushing back. Hundreds of students staged a rally on May 13 at Rome University under a banner with the words "Fascism is not an opinion," meaning it's not an acceptable point of view.

"Fascist scum, go back to your sewers," they chanted. "You too, Salvini!"

Previous audio and Web versions of this story stated that men wearing black hailed Benito Mussolini in Milan "near the spot where partisans executed him in 1945." Mussolini was executed in the village of Giulino di Mezzegra and partisans later strung up his body in Milan.