Accessibility links
Anita Hill On Joe Biden: We Don't Need 'To Take The Lesser Of Two Evils' Hill, who testified against Clarence Thomas during his 1991 Senate confirmation hearings, accepted a PEN America Courage Award on Tuesday. She spoke to NPR about Joe Biden and the #MeToo movement.

Anita Hill On 2020 Election: We Don't Need 'To Take The Lesser Of Two Evils'

Anita Hill On 2020 Election: We Don't Need 'To Take The Lesser Of Two Evils' 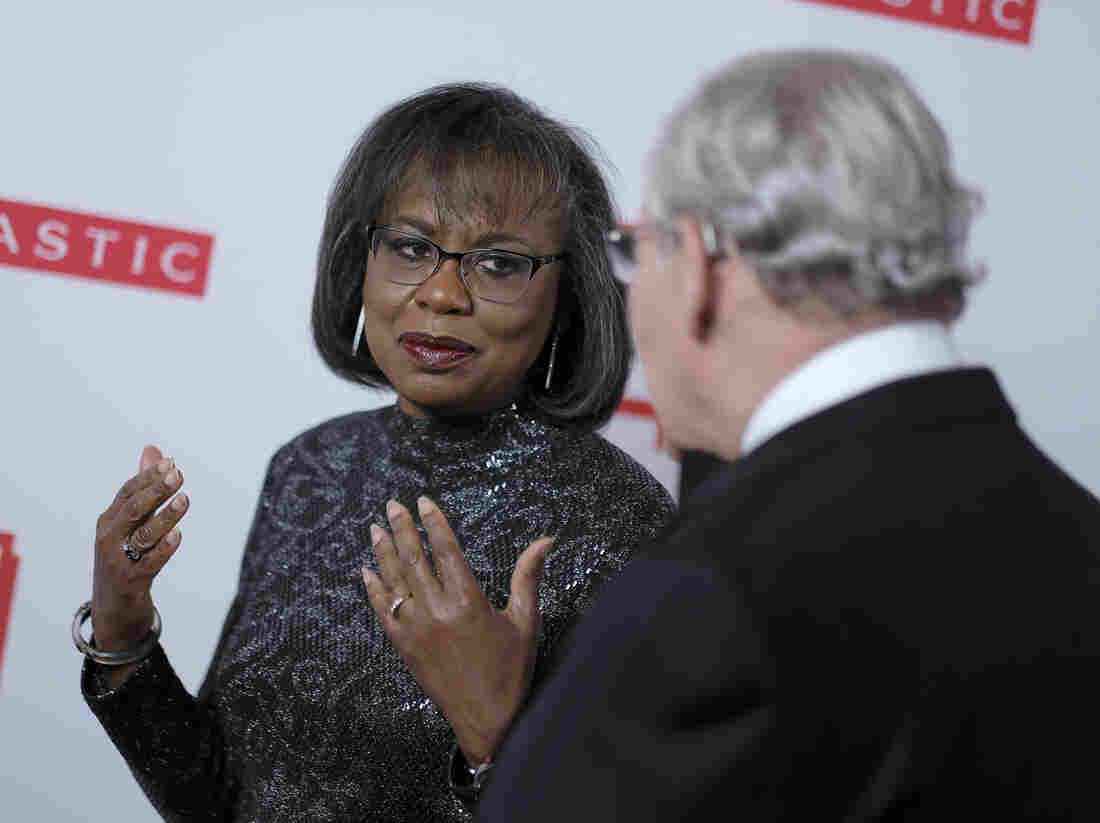 Anita Hill speaks with journalist Bob Woodward before the 2019 PEN America Literary Gala in New York City, where they were both recognized with awards Tuesday. Dimitrios Kambouris/Getty Images hide caption 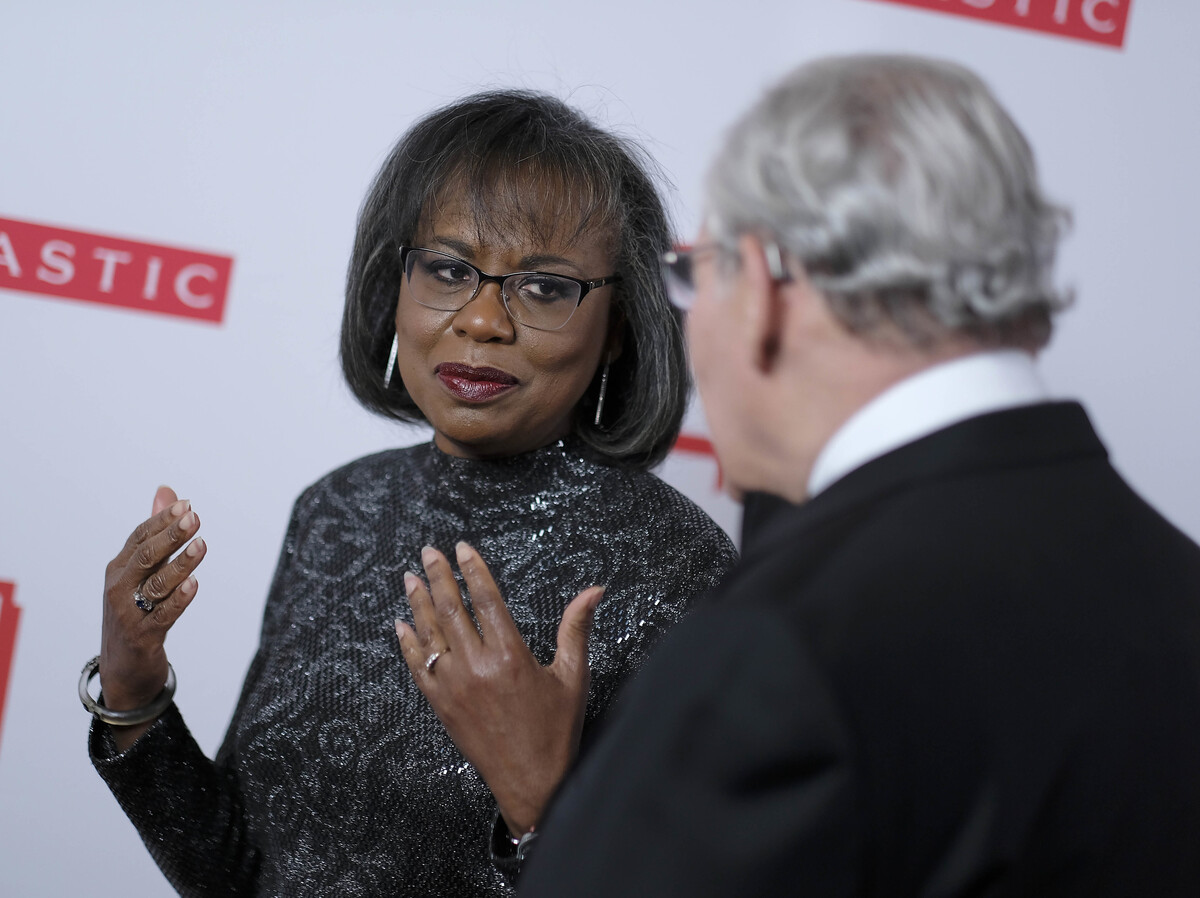 Anita Hill speaks with journalist Bob Woodward before the 2019 PEN America Literary Gala in New York City, where they were both recognized with awards Tuesday.

Anita Hill has never really been one for compromise.

The lawyer's decision not to do so first propelled her into public life nearly three decades ago, when she came forward with sexual harassment allegations against Clarence Thomas in his 1991 Supreme Court confirmation hearings. And she doesn't intend to begin compromising now.

"You have to understand that what we need is not just to take the lesser of two evils," Hill told NPR on Tuesday, an hour before she took the stage to accept her Courage Award at the 2019 PEN America Literary Gala in New York City.

These days, Hill teaches at Brandeis University and heads up the Hollywood Commission on Eliminating Sexual Harassment and Advancing Equality. But those Senate Judiciary Committee hearings have never quite disappeared in her rearview mirror since Thomas — who has long denied the allegations — was confirmed to the Supreme Court. Now, the hearings are back in the news because the senator who led them, Joe Biden, recently tossed his hat into the presidential race — and, nearly in the same breath, expressed his regret for how Hill was treated in 1991.

Despite Biden's sentiment, and a one-on-one phone call he arranged in order to express it, Hill has not bowed to mounting pressure to support the presumed front-runner for the Democratic presidential nomination.

"I don't think that we have to make those kinds of choices. I think we can expect more from our leaders. We have with us information that suggests we have a public crisis around sexual violence," she said Tuesday, citing the prevalence of sexual assault on campus. "We need people in place — and that's leaders in public and private sectors — to confront this issue and put into place policies and practices throughout the government and throughout our institutions generally to address it."

Later that evening, perched onstage at the American Museum of Natural History, in the shadow of a massive model of a blue whale, Oscar-winning actress Lupita Nyong'o celebrated Hill as "one woman calling 'time's up' decades before the wider society was ready to blow that whistle."

"Twenty-eight years later, a paradigm shift is occurring. There is an unstoppable wave of personal and societal revelation and truth-telling that emulates Hill's initial heroic act," Nyong'o said in introducing Hill. "With the #MeToo movement, the Time's Up movement, we are speaking together."

Hill was not the only figure to be honored at Tuesday's gala.

A trio of Saudi women's rights activists, Nouf Abdulaziz, Loujain al-Hathloul and Eman al-Nafjan, received the PEN/Barbey Freedom to Write Award. Their siblings had to accept on their behalf — the three women were arrested by Saudi authorities last year and remain unable to leave the kingdom. Journalist Bob Woodward also received honors Tuesday night, accepting the Literary Service Award for his Watergate coverage and 19 books.

But it was Hill who took the stage to deliver the closing speech of the evening.

"It did not take 28 years — though it did take more than the hearings — but I today am here to say that I have my voice," she told the crowd. "And my ancestors' story ... reminds me that I must never take having my voice for granted, and I must never abuse it. It's taken generations to gain this privilege, the privilege that I have to write and to speak out with the truth, and to speak truth to power. It's taken this long, and I will never give it up."

And, as she told NPR ahead of the ceremony, she fully intends to keep using it.

"I'm not trying to dictate policies. I am trying to say that we need to do some thinking and we need some leadership to bring those policies together. I don't think they exist now, completely," she said. "I think that much more needs to be done."