Accessibility links
Border Facility Temporarily Suspends Migrant Intake After 32 Identified With Flu The McAllen, Texas, facility is the same one where a 16-year-old Guatemalan boy became ill last week, and died after he was transferred to another Border Patrol station. U.S. Border Patrol agents conduct intake at the Central Processing Center in McAllen, Texas. The center is temporarily not taking in migrants after the outbreak of "a flu-related illness." U.S. Customs And Border Protection/Getty Images hide caption 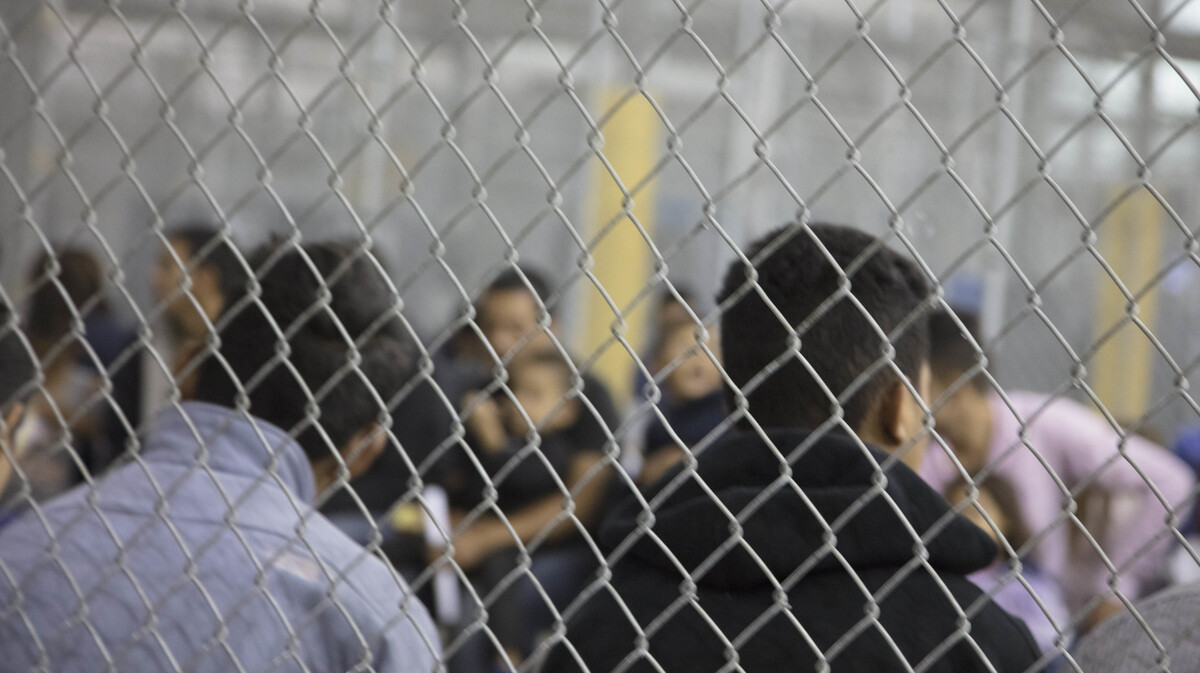 U.S. Border Patrol agents conduct intake at the Central Processing Center in McAllen, Texas. The center is temporarily not taking in migrants after the outbreak of "a flu-related illness."

U.S. Customs and Border Protection temporarily suspended intake at the McAllen Central Processing Center on Tuesday, the largest migrant processing center in South Texas, after the outbreak of what the agency calls "a flu-related illness."

It is the same facility where a 16-year-old Guatemalan boy became ill last week, and died after he was transferred to another Border Patrol station.

According to a CBP spokesman, after identifying 32 individuals who tested positive for influenza, all were provided treatment on the site or in local hospitals "as appropriate." As of Wednesday afternoon, the Central Processing Center resumed operations.

CBP officials say Carlos Hernandez Vazquez was found unresponsive on Monday morning. A nurse practitioner had diagnosed him with influenza A, and he had been moved between facilities to separate him from other migrants to stop the spread of the flu.

"A large number" of migrants were complaining of high fevers and other "flu-related" symptoms at McAllen, CBP said in a statement late Tuesday. The agency says medical staff are providing treatment, but it decided at the time to suspend taking in more migrants "to avoid the spread of illness."

More than a dozen immigrants interviewed Tuesday at the Catholic Charities Respite Center in McAllen, Texas, described coughing and feverish children at the overcrowded processing center — where hundreds of people are kept together in fenced pens, frigid holding cells or sleep outside in the parking lot.

Carmen Juarez from Chiquimula, Guatemala, says she and her 6-year-old daughter were asked to sleep "under the stars" at the McAllen processing center because her daughter had a fever. There were hundreds of other migrants also sleeping outside, she said.

"There were kids getting sicker. They're hungry," she told NPR. "The little ones don't eat the ham sandwiches they hand out."

Hernandez is the fifth migrant child to die after being apprehended crossing the U.S.-Mexico border in the past six months. Before December, no child had died in Customs and Border Protection custody in more than a decade.

The latest death came days after the American Civil Liberties Union of Texas complained to federal officials that migrants were being subjected to poor conditions in overcrowded detention and processing facilities in the Rio Grande Valley. The group requested an investigation by the Department Homeland Security Office of Inspector General.

Rochelle Garza, an ACLU lawyer, said the organization interviewed more than 120 migrants and heard "horrendous stories" from migrants who said they were denied access to water and medicine and held in outdoor pens for several days in a row.

"Being forced to sleep outside for several days on end in the south Texas heat, sleeping on gravel without any protection from the sun or elements, that could make anyone sick," Garza told NPR's All Things Considered. "And not being allowed to shower, to have access to basic hygiene. It's unimaginable, really. And I think that that plays into the deaths of children."

After Grim Deaths In The Borderlands, An Effort To Find Out Who Migrants Were

The Department of Homeland Security, which includes CBP, has not responded to a request for comment on the ACLU complaint.

Hernandez's death is still being investigated by the FBI, local police and CBP.

Critics say he should not have been held for a week. By law, CBP is not supposed to detain migrant children for more than 72 hours. Critics are also asking why Hernandez was not hospitalized. In the case of the four previous deaths, the children died days or weeks after being treated in a hospital.

Most migrant families and children arriving at the southern border have traveled from Central America and are often exhausted and ill. Immigration officials have expanded the medical response in recent months and are asking Congress for more money to deal with the current influx.

Many Border Patrol stations are now staffed 24 hours a day with medical staff, and Border Patrol agents are transporting an average of nearly 70 kids a day since December to the hospital. But CBP officials say their facilities are not equipped to handle the current influx of migrant families. Acting DHS Secretary Kevin McAleenan is on Capitol Hill on Wednesday, asking for billions of additional dollars for more humanitarian aid and better facilities.