Accessibility links
More Than 70 Years After The Holocaust, Victims Are Laid To Rest In Belarus The remains emerged at a construction site in January. "I think it's very late, but better late than never," said Marcel Drimer, an 85-year-old Holocaust survivor.

More Than 1,000 Holocaust Victims Are Buried In Belarus After Mass Grave Discovered

More Than 1,000 Holocaust Victims Are Buried In Belarus After Mass Grave Discovered 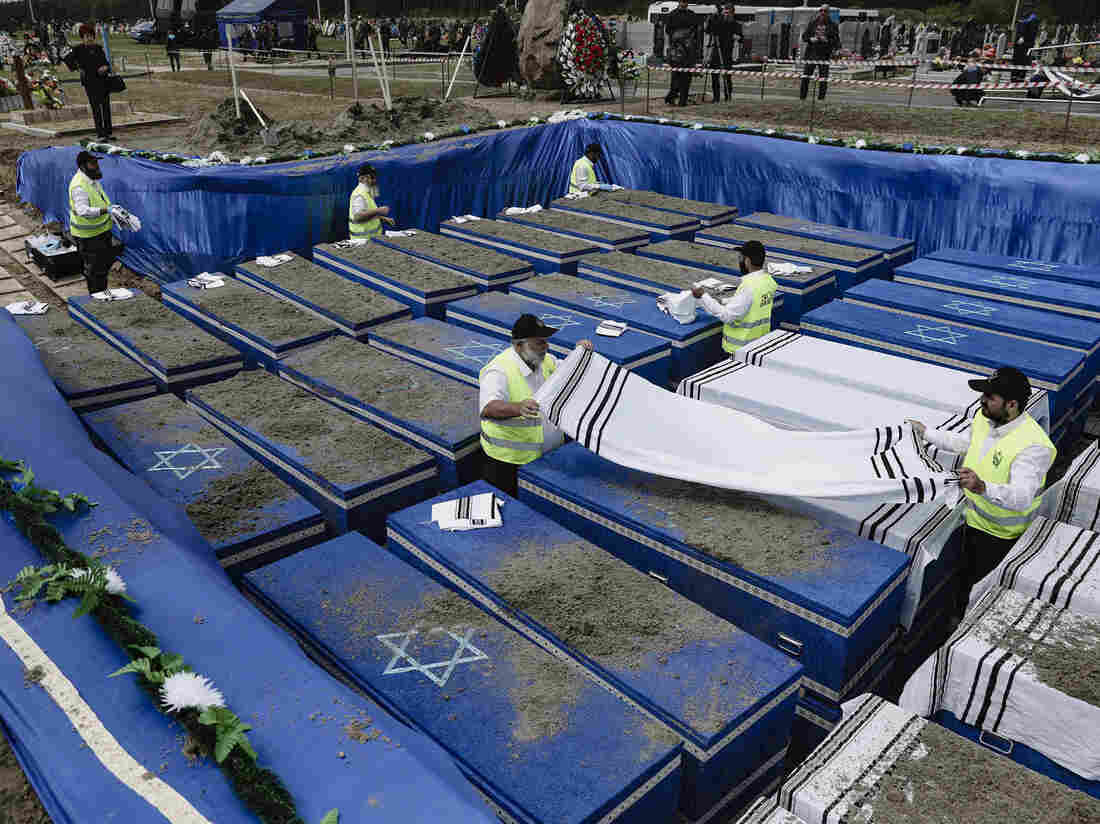 Volunteers bury the remains of more than 1,000 Holocaust victims at a cemetery just outside Brest, Belarus, on Wednesday. Uladz Hrydzin/AP hide caption 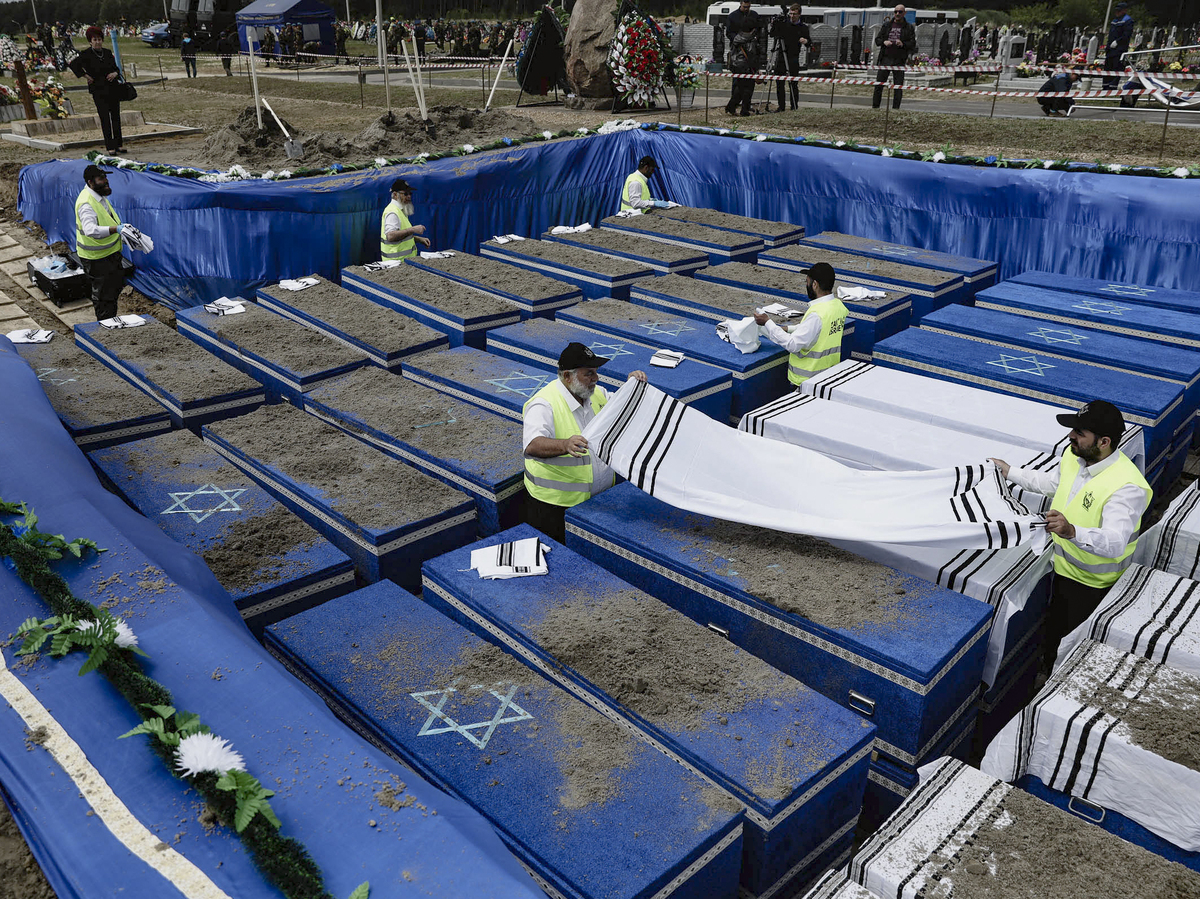 Volunteers bury the remains of more than 1,000 Holocaust victims at a cemetery just outside Brest, Belarus, on Wednesday.

More than 1,000 victims of the Holocaust were buried Wednesday in Belarus, some 70 years after they were killed in the genocide.

Their bones were unearthed this winter by construction workers as they began to build luxury apartments in the southwestern city of Brest, near Poland.

Soldiers brought in to excavate found undisputed evidence of a mass grave: skulls with bullet holes, shoes and tattered clothing worn on the last day of people's lives.

Because the newly uncovered mass grave was on the site of a wartime ghetto, the victims were believed to be Jews slaughtered by Nazis. Many Jewish people had been forced to live behind barbed wires in the Brest ghetto before they were executed.

On Wednesday, their remains were placed into 120 coffins decorated with the Star of David, according to The Associated Press. A burial and ceremony was held at a cemetery outside of the city.

"I think it's very late, but better late than never," Marcel Drimer, an 85-year-old Holocaust survivor from Poland, told NPR.

"I am upset that the officials want to build on the sacred site," he added.

Authorities permitted the apartment construction to continue, prompting locals and leaders in the Jewish community to denounce the way the mass grave discovery was handled.

A petition to stop construction emerged online, with signatures supporting a proposal for the grounds to become a memorial park.

The Union of Belarusian Jewish Public Associations and Communities expressed dismay that the construction site had not been adequately examined before construction started, "even though, according to eyewitnesses and historians evidence, it was the place where mass executions of the Jewish population of the city took place," the group said in a statement in March.

World Jewish Congress CEO and Executive Vice President Robert Singer said that the municipality should have carefully examined the land before issuing a building permit. He called the construction "an affront to the memories of the Jewish residents of the city who were shot and murdered in cold blood at that very site."

Belarus had a robust Jewish community before World War II, but almost 90% of that population was killed by the time the Holocaust ended, according to the World Jewish Congress.

In the decades since the genocide, the city of Brest has faced accusations of callousness toward its Jewish population. A prominent synagogue saw a movie theater built over it. Other synagogues were converted into shops, schools, hospitals, offices and gyms. Jewish gravestones were "recycled" for roads, gardens and other purposes, according to Vice, and Brest's Holocaust museum comprised "a room in a basement," according to the BBC.

Regina Simonenko, who leads a local Jewish community, told the AP that authorities chose to rush the burial instead of doing DNA tests to discern who the victims were. "We were told that DNA tests are expensive and take a long time," she said.

A spokesperson from the construction company told Deutsche Welle that a square meter (10.76 square feet) for the high-end complex was selling for almost double the city's average, at about $1,250 by the end of 2018.

The area where the remains were found was slated to become a manicured courtyard, the German outlet reported. The mayor's office said the building will very likely possess a plaque to remember the victims.

These inscriptions aren't so uncommon, said Drimer, wearily. He returned to his hometown of Drohobycz about 70 years after the war. He said he saw a bus station with a small plaque to denote where Holocaust victims had once been buried. "It wasn't unusual," he said. And though survivors like Drimer found it disturbing, "there weren't enough Jews to say anything."