Accessibility links
Review: 'Booksmart' Is A Wise, Warm Directorial Debut From Olivia Wilde Director Olivia Wilde and leads Beanie Feldstein and Kaitlyn Dever do wonderful work in a film about two high-school best friends who have one night to reverse course. 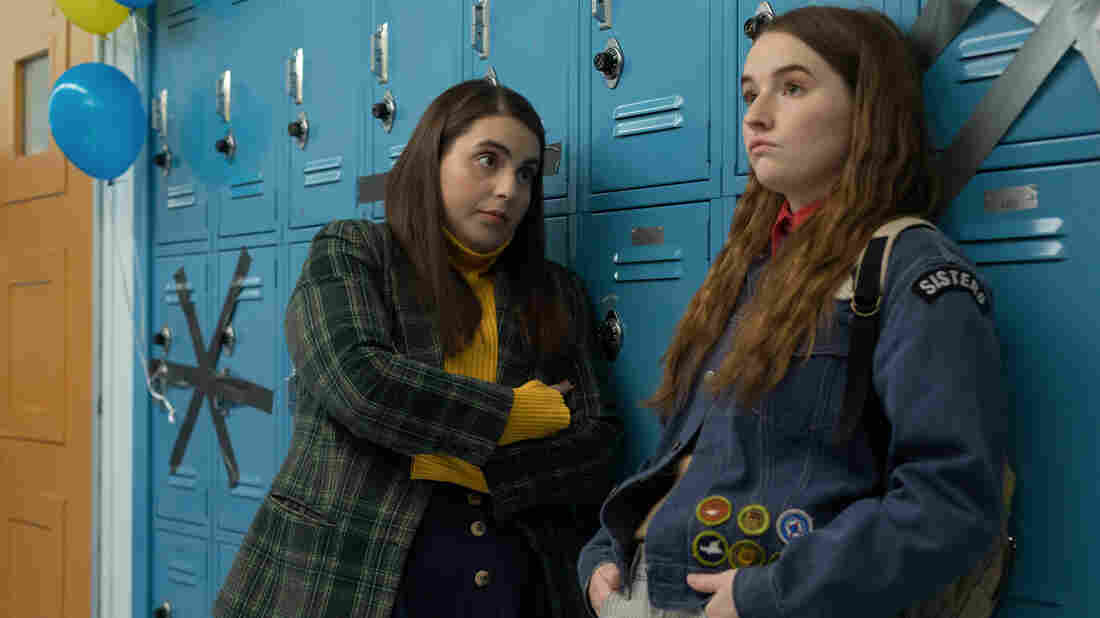 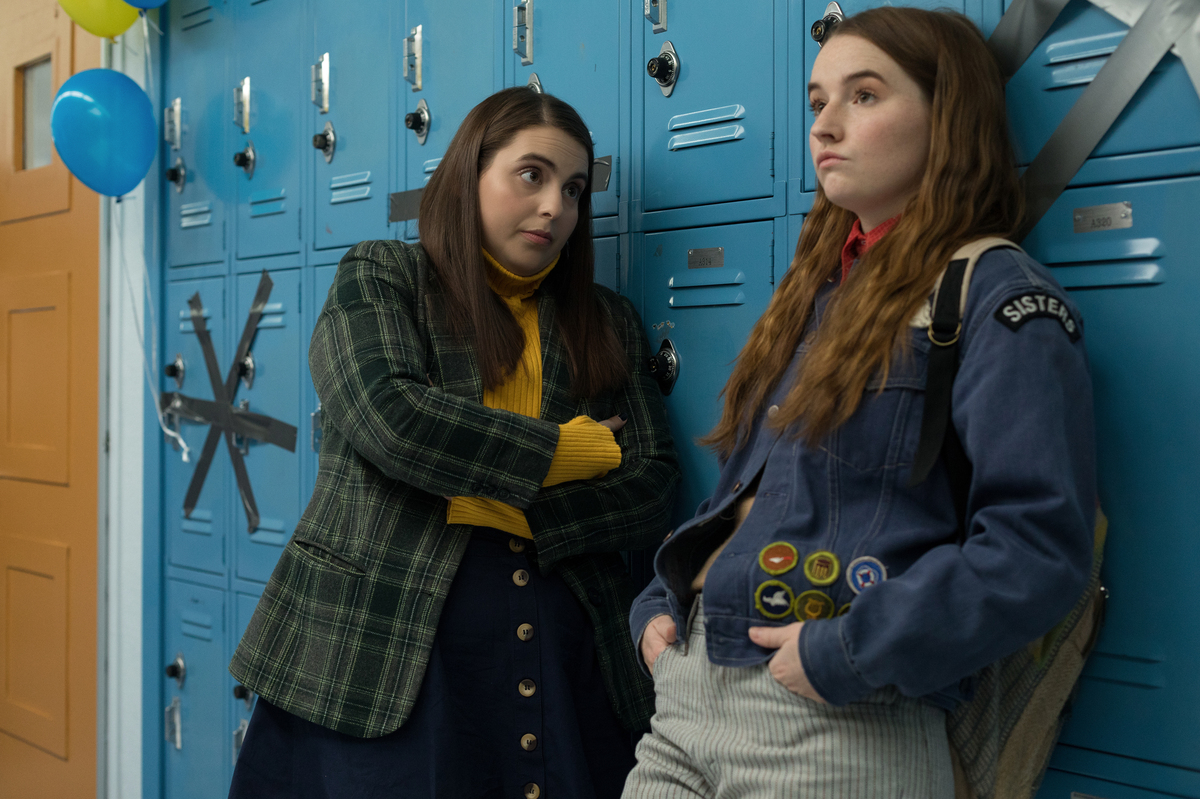 The opening moments of Booksmart, the directorial debut of actress Olivia Wilde, present a question, just by force of viewing habit: What kind of cinematic high-school girl type is this?

Played by Beanie Feldstein, Molly begins her day listening to affirmations about achieving greatness. She goes off to school, where she's class president. She suffers no fools, gladly or otherwise. From these hints, you might guess that in the world of high school movies, she is an Election Tracy Flick type: driven, insufferable, unpopular. But you also see her dance like a goofball with her best friend Amy (Kaitlyn Dever), and then you think ... maybe not. Maybe she is a warm and likable nerd, the underdog type. And at some point, it comes into focus: Neither she nor Amy is any cinematic type at all.

Molly and Amy are best friends who love each other more than anything, who are about to graduate from high school and head off to college. They have both — Molly especially — focused on school, believing (or perhaps telling themselves?) that they were not partying much, not getting too wild, not having the wrong kind of fun, because they were academically driven. But then, Molly learns that some of the kids she's always thought she wouldn't want as friends because they don't care about school are about to go to colleges as good as hers. This shakes her. Perhaps high school, she realizes, is not a choice between academic success and social immersion. Perhaps she has abstained from much of party life for no real reason.

That sets off the main section of the film, which grows out of Molly and Amy's decision to have a lot of fun on their last night of high school before graduation, to make up for all the things they thought they had to skip.

This somewhat surprising swerve, in which the script from four women (Susanna Fogel, Emily Halpern, Sarah Haskins and Katie Silberman) rejects the idea that smart kids are un-fun and fun kids are un-smart, proves critical. Molly and Amy are not really victims of a social pecking order. They have largely isolated themselves unnecessarily, and the insight here is that that, in fact, is many people's great high school regret. It's not the things you couldn't have, but the things you thought you couldn't have.

For Amy, the stakes are particularly high, because Amy is a lesbian who's been too shy to date. Molly keeps trying to get her to take some risks, but she doesn't want to, and who can blame her? The story of Amy's queer-kid journey is wonderful in that it is both a specifically and assertively queer-kid story and a story that anyone shy, anyone uncertain, can understand. Diana Silvers (most recently credited in Glass as "Cheerleading Girl") is dynamite as Hope, an unfriendly girl whose precise connection to this story takes a while to develop, and skateboarder Victoria Ruesga — in her first acting job — is perfectly, cheerfully inscrutable as Ryan, the object of Amy's crush and one of her reasons for venturing out at Molly's suggestion.

(A note: Ruesga, like the rest of the ensemble, was cast by the superb casting director Allison Jones, whose resume is long and celebrated, including Freaks and Geeks, Parks and Recreation, Superbad, Eighth Grade, Lady Bird, Veep, Bridesmaids ... there's a decent argument to be made that few people have been more important to the last 25 years of American comedy. The cast here, full of unknowns and little-knowns, is one of her best.)

At heart, Booksmart, while it looks like an examination of high-school social survival, is about the profound bond between these two girls and how nervous they are about getting by without each other. Underneath the story of Amy's crush on Ryan is Molly's overbearing "support" of her queer friend. And then underneath the story of that support lies Molly's frustration that she winds up responsible for making all the decisions for her less adventurous friend. They are not only feeling the strain of a looming separation as Amy heads off for a trip to Africa; they are feeling the strain of adjusting to adulthood and figuring out what their friendship will look like when they're not joined at the hip in a way that tends to paper over conflict.

Feldstein and Dever are just sublime at giving these girls the depths of feeling as well as the comic flair that they need. While it is a relationship film, Booksmart also functions as a one-crazy-night comedy, and it benefits from wonderful touches like a fine and weird performance from Billie Lourd as a mysterious classmate who somehow is both everywhere and nowhere. And for a party movie, it also makes some marvelously creative cinematic choices, including an underwater sequence involving Amy and an argument between the two girls that wisely conveys that it is not just what is said in this moment that matters, but the feel of it. It matters how everything explodes at once, and you realize you can learn how these girls fight without even knowing every word they're saying.

The writers, the cast, and Wilde have made a film that's a celebration of teenage girls, of teenage best friends, and even of popular kids who would rather not be thought of as meatheads and airheads simply because they like to go to parties. It's a humane and heartfelt film without a mean bone in its figurative body, truly, and Feldstein and Dever are not even the only ones in the cast who deserve to be called revelations.