Accessibility links
'Thank God We're OK.' Migrants Tell Of Conditions In A Texas Holding Facility The facility was shut down for 24 hours after 32 detainees got sick with the flu. A 16-year-old who had gotten sick there later died at another Border Patrol station. 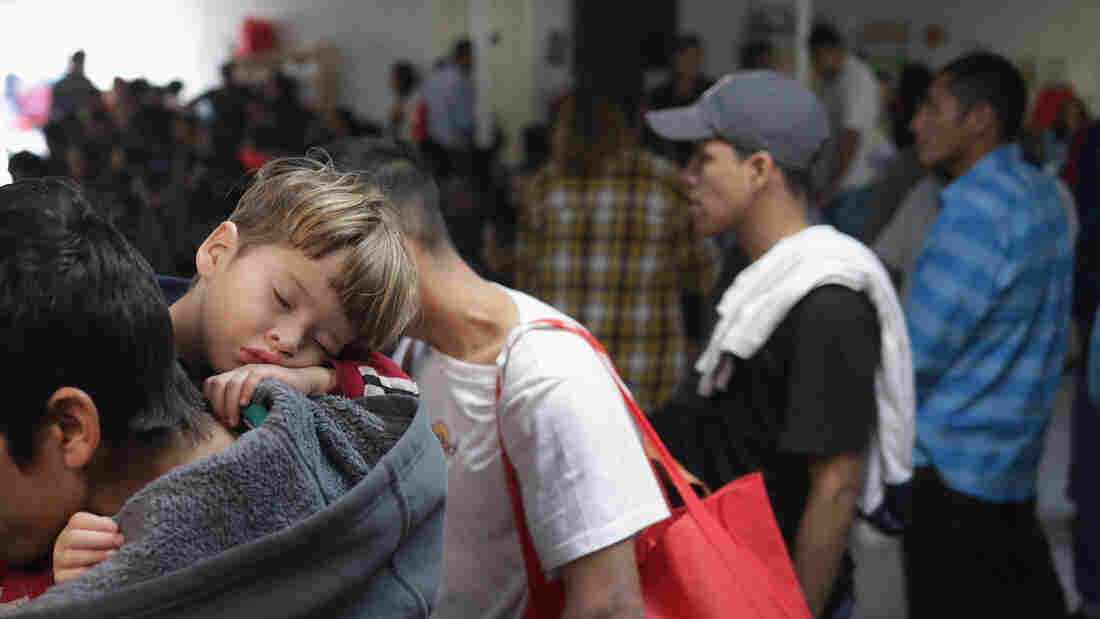 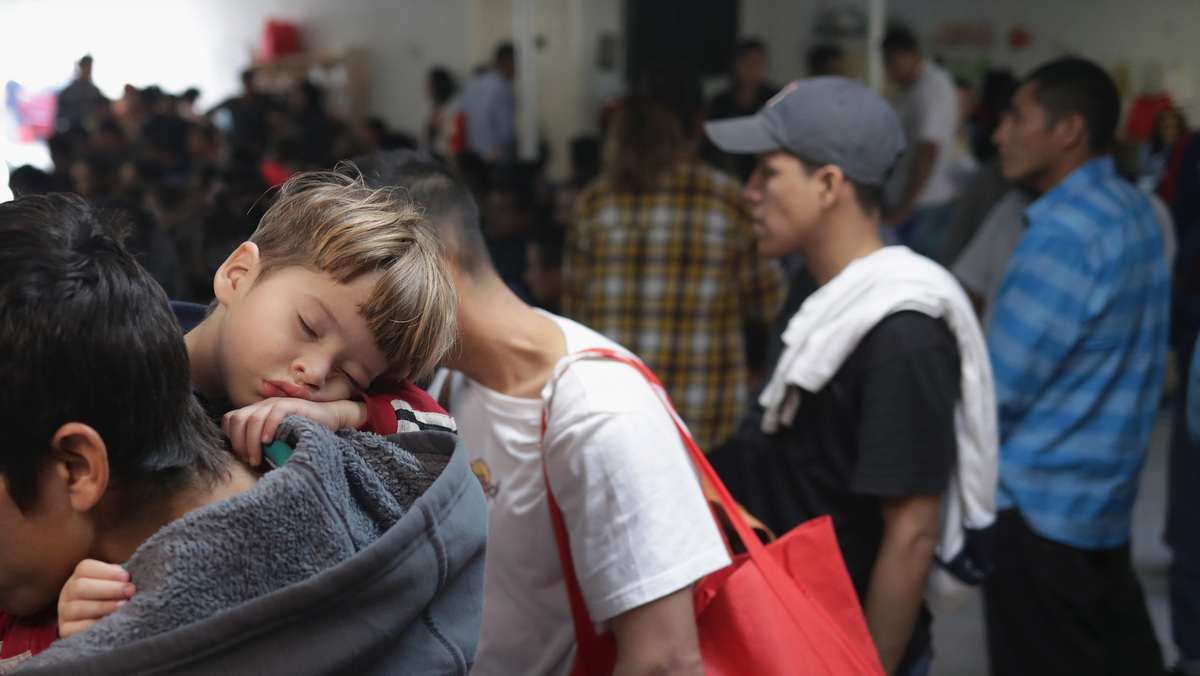 Immigrant asylum-seekers wait for aid at the Catholic Charities Humanitarian Respite Center after being released by U.S. Customs and Border Protection in McAllen, Texas. Migrants told NPR conditions in the CBP holding cells were unhealthy.

U.S. Customs and Border Protection shut down its largest migrant processing center in South Texas for 24 hours on Tuesday after 32 detainees got sick with the flu. This is the same location where a 16-year-old Guatemalan boy became sick, and died Monday at another Border Patrol station.

CBP says it stopped taking in migrants on Tuesday and treated anyone who was sick; the facility was sterilized and reopened Wednesday afternoon.

"There are sick people. They have coughs and colds. Mainly the children, who are the most vulnerable to becoming ill," said Darwin Caballero, a 31-year-old construction worker from San Pedro Sula, Honduras, who was traveling with his 5-year-old daughter.

We slept on the hard ground, under the stars. No mattresses, just a silver blanket. My daughter had a fever and that's why they asked us to sleep outside.

He and more than a dozen other migrants were interviewed at the Catholic Charities Respite Center in central McAllen. They were recently discharged from CBP's McAllen Central Processing Center, located a few miles north of the Rio Grande.

"Thank God we're OK," said Carmen Juarez, who trekked from Chiquimula, Guatemala, with her 6-year-old daughter. "We slept on the hard ground, under the stars. No mattresses, just a silver blanket. My daughter had a fever and that's why they asked us to sleep outside." She said medical personnel took her daughter, Estefani, to the hospital, where she was given medicine and gradually improved.

At the shelter, inside a hallway echoing with crying kids and smelling of stale sweat, Mefi Fuentes shook his head remembering his ordeal in the processing center.

"I was four days in the freezer (the detainees' name for CBP's well air-conditioned holding cells) and five days outside," he said. "We slept on cement surrounded by a chain-link fence."

"Some children had colds, fever, coughs. It was rough," continued Fuentes, from San Marcos, Guatemala. "We're poor, but I've never experienced conditions like that in my whole life."

This is where Carlos Hernandez Vazquez was taken after he crossed the river into Texas on May 13. The 16-year-old from Baja Verapaz, Guatemala, spent six days in CBP custody, even though federal law says underage migrants must be transferred to child-friendly shelters within 72 hours.

On Sunday, a nurse practitioner diagnosed Hernandez with the flu and gave him Tamiflu. Then he was moved to the nearby Weslaco Border Patrol station because he was contagious. There, medical personnel checked on him at 6 a.m. Monday and found him "unresponsive."

Ana Lucia Fernandez, third secretary at the Guatemalan consulate in McAllen, said she has talked to the teen's older brother, who made the trek from Guatemala with him. They were separated at the border.

"The family has indicated to me that the young man did not have health problems during his journey," Fernandez said.

[T]he Border Patrol didn't cause this problem; it got dumped in our lap.

The McAllen station ordinarily holds up to 1,500 detainees, but lately it has been packed with nearly twice that many.

"They're overflowing. They're just putting them outside, on the gravel, on the pavement. We don't have places for them," said a veteran Border Patrol agent who works inside the Central Processing Center. He asked not to be named because he's not authorized to speak for the agency.

He said he's not at all surprised that a flu outbreak happened in the facility. "There are no hand-washing facilities, no showers. The smell is horrendous. Our buildings weren't built to handle this type of stuff."

"But the Border Patrol didn't cause this problem; it got dumped in our lap," he said, referring to the large number of immigrants who cross the border without authorization. He blames Congress for refusing to "get off their butts and fix the problem" by changing laws that he says attract asylum-seekers.

In the past year, some 200,000 migrants have been detained in the Rio Grande Valley of Texas — the nation's busiest illegal crossing spot. Most of them are families and unaccompanied children.

This grueling migrant trail from Central America to CBP detention facilities creates "the perfect storm" for getting sick, says Dr. Dolly Sevier, a Brownsville pediatrician. She has treated patients, including children, released from Border Patrol custody.

She says she's not surprised, either, by the flu outbreak at Central Processing. "What I do know is [the migrants] come out of there very dehydrated and I think they're not just getting enough fluids."

The migrants' immune systems are often already weakened before they cross into the U.S., she says. Many families don't get enough to eat or drink on the journey, and they can spend time confined in cramped, unhealthy stash houses in Mexico. Then, Sevier says, the conditions of detention in the U.S. can make everything worse.

For instance, the Border Patrol cranks up the air conditioning in its holding cells — to reduce germs and keep people comfortable in the South Texas heat, it says. But detainees call the cells hieleras, or freezers.

"I would recommend they not have them in freezing conditions when they arrive and I recommend they appropriately hydrate them," Sevier says. "Those two steps would probably cut the illness by a significant percent."

CBP maintains its detention facilities meet all government standards. But the agency says it's overwhelmed by the migrant influx and needs more resources.

Hernandez is the sixth migrant youth to die since September after crossing the U.S. border. Five died in hospitals. Hernandez is the only who was found dead in a Border Patrol cell.

The U.S. Office of Refugee Resettlement reported late Wednesday the previously undisclosed death in September of 2018 of an unaccompanied 10-year-old migrant girl who was in its care. A statement said she had a history of congenital heart defects. She died in a children's hospital in Omaha, Neb., following a surgical procedure that left her in a coma.

Twenty-six U.S. senators, the Congressional Hispanic Caucus and the ACLU have called on the Office of Inspector General of the Homeland Security Department to investigate the migrant deaths and look into overcrowded conditions at CBP detention facilities, especially those used for minors and families.

"We know individuals have been getting sick in facilities," says Rochelle Garza, an ACLU attorney in Brownsville who co-authored the complaint to the inspector general. "This is not something we should deem as OK. Period." She says an ACLU team interviewed 120 migrants who had been in Customs and Border Patrol custody earlier this year. "Treating people like this is not an American value."