Accessibility links
Misery Grows At Syrian Camp Holding ISIS Family Members In recent visits to the camp, NPR was told of babies dying of malnutrition, and found women collapsed by roadsides. "There's a lack of supplies and the numbers of patients are huge," a doctor says. 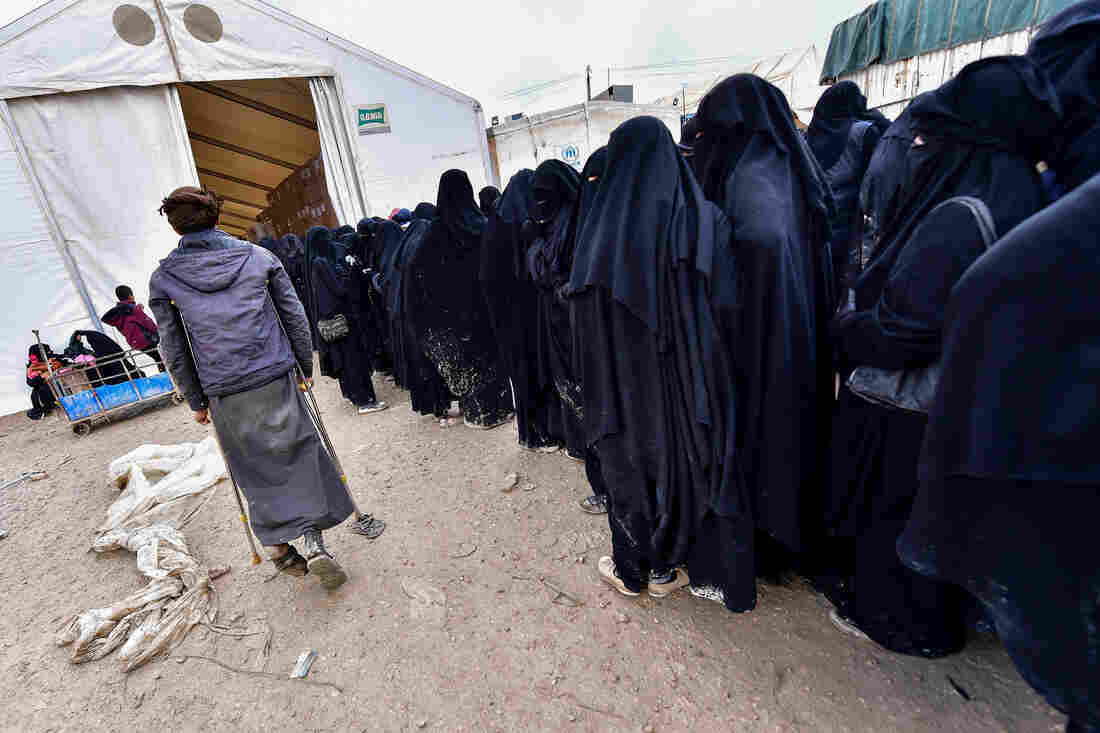 Foreign women living in Syria's al-Hol camp, where more than 73,000 people are detained, stand in line to receive goods in March. Residents lived in the former ISIS caliphate and most are children, born to Syrian, Iraqi and foreign parents. Giuseppe Cacace/AFP/Getty Images hide caption 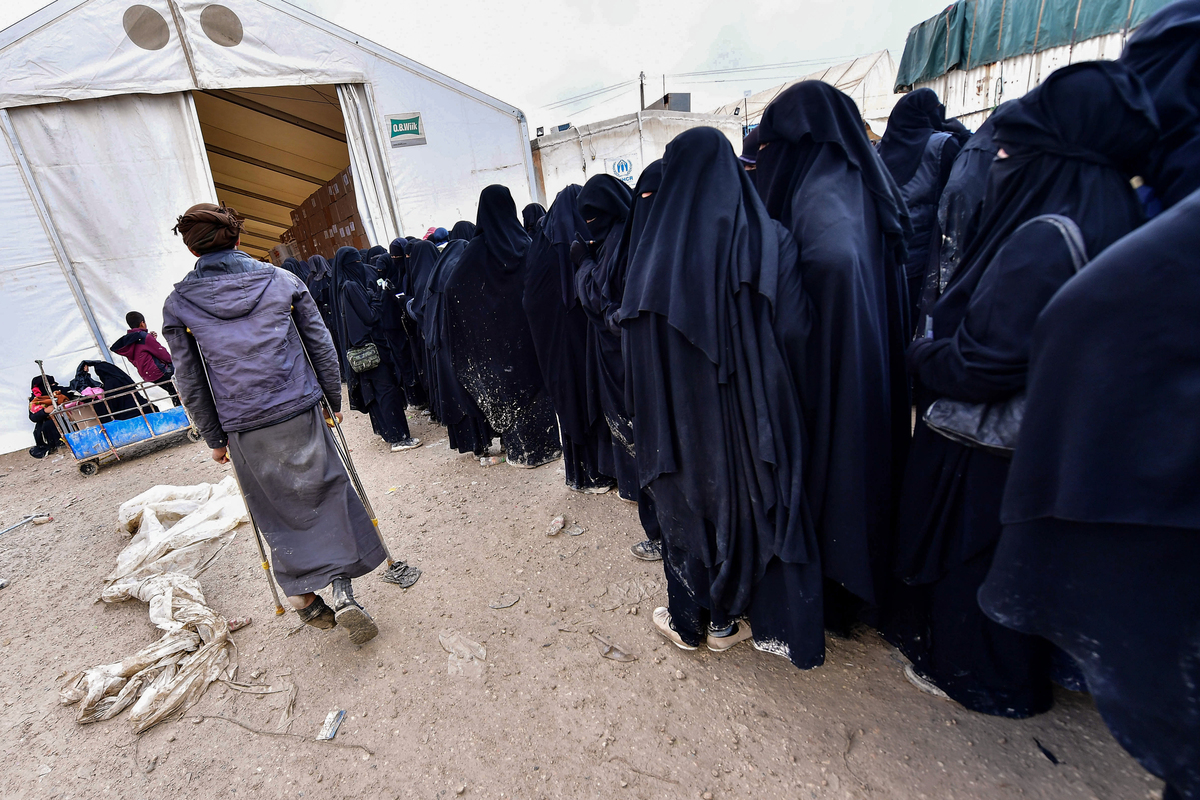 Foreign women living in Syria's al-Hol camp, where more than 73,000 people are detained, stand in line to receive goods in March. Residents lived in the former ISIS caliphate and most are children, born to Syrian, Iraqi and foreign parents.

In northeast Syria, an overcrowded detention camp is home to more than 73,000 people who lived in the former ISIS caliphate. Almost three-quarters of the al-Hol camp residents are children — born to Syrian, Iraqi and other foreign parents who flocked to the ISIS caliphate over the five years it ruled territory here.

In recent visits to the camp, NPR was told of babies dying from malnutrition and disease, and found women collapsed by the side of the road.

A woman moaning in pain sits on the pavement, too weak to pull herself up to a metal bench after undergoing kidney surgery at a hospital outside the camp earlier that day. There's no transportation to take her to her tent.

'We Pray For The Caliphate To Return': ISIS Families Crowd Into Syrian Camps

Nearby, an Iraqi mother holds a baby with a skull fracture from a fall. "I wanted a scan to make sure she is all right, but they won't send me for one," she says.

Along a road in the camp, a woman dressed in an enveloping black niqab has collapsed. A group of women flags down a passing van, then gathers around and lifts her into the back seat.

By mid-April, 200 children had either died on their way to the camp from the last ISIS stronghold of Baghouz, or shortly after arriving. Many died of malnutrition or hypothermia, and with shortages of medical facilities and infant formula for mothers who can't nurse, children's health in the camp remains precarious. 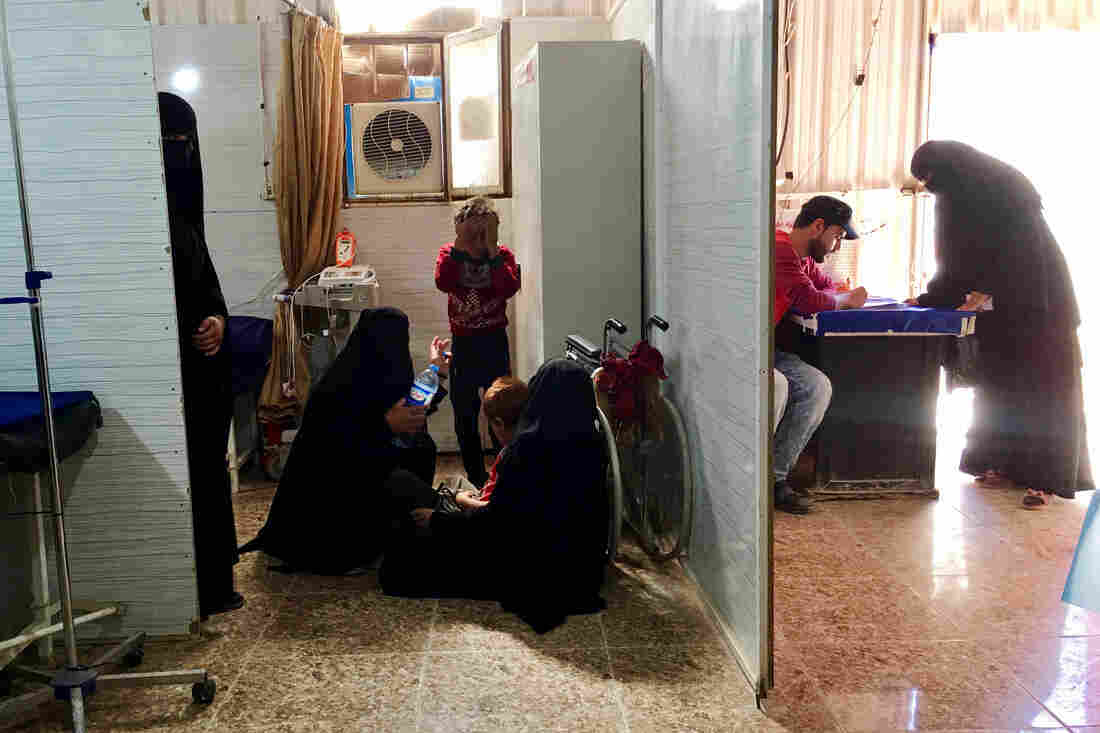 Women sit on the floor as they wait in a clinic at the al-Hol detention camp. Jane Arraf/NPR hide caption 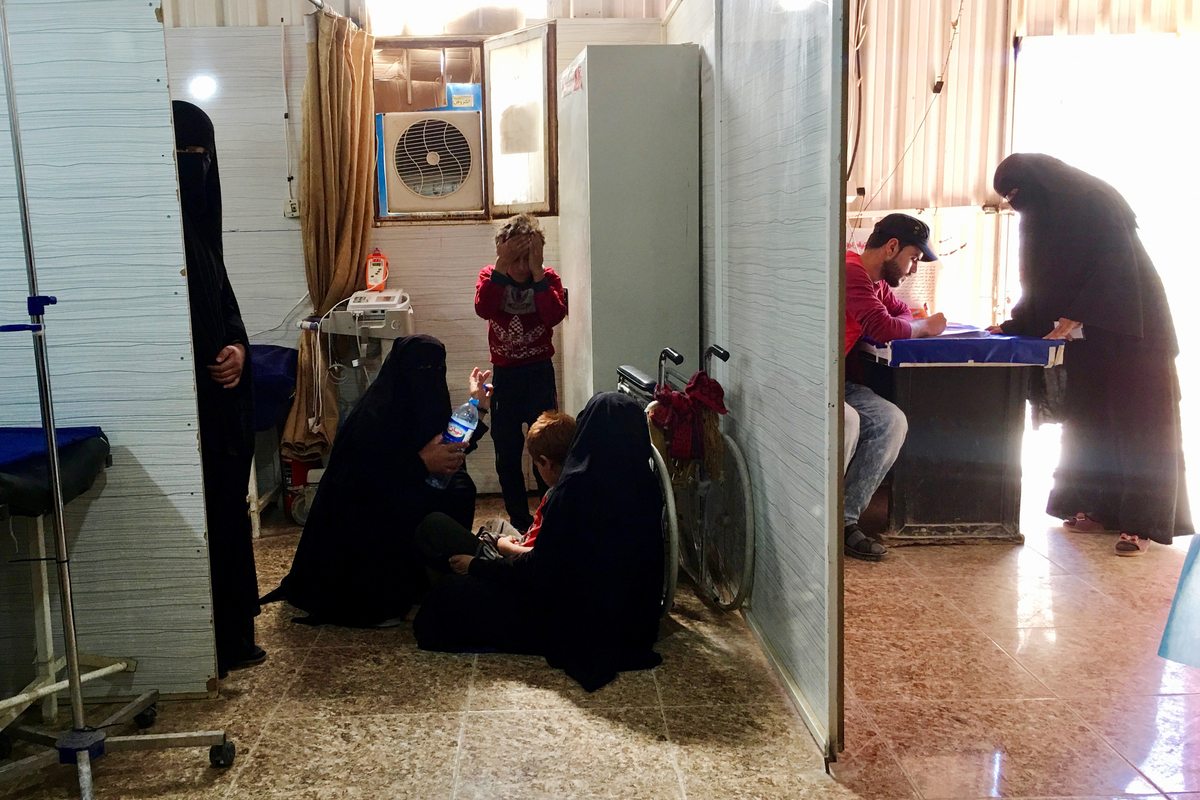 Women sit on the floor as they wait in a clinic at the al-Hol detention camp.

Officials say some international aid agencies are reluctant to provide assistance to people with a perceived ISIS affiliation.

"A shortage of everything"

"We are continuously dealing with cases of malnutrition," says Massoud Ramo of the Kurdish Red Crescent, a regional aid organization that is one of the few openly operating in the camp.

Ramo, a clinic director, says over the most recent week, six children under age 5 died from various causes. Fourteen children were sick enough to be transferred to a hospital an hour away.

"The biggest problem is transporting the patients," says Ramo. "There are waves of people coming and not enough ambulances or emergency room staff."

In the clinic's makeshift emergency room, one of a handful in the desolate camp, Dr. Sino Antar explains to an Iraqi couple how to treat their baby for diarrhea. Then he turns to an infant with breathing problems. 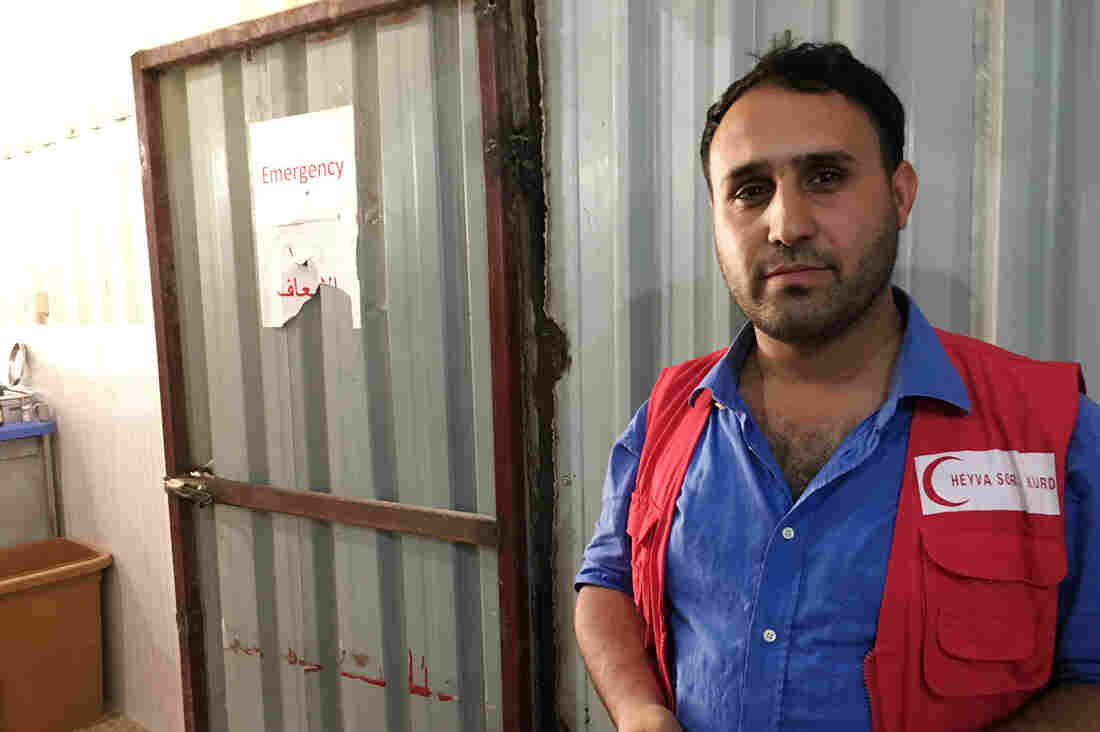 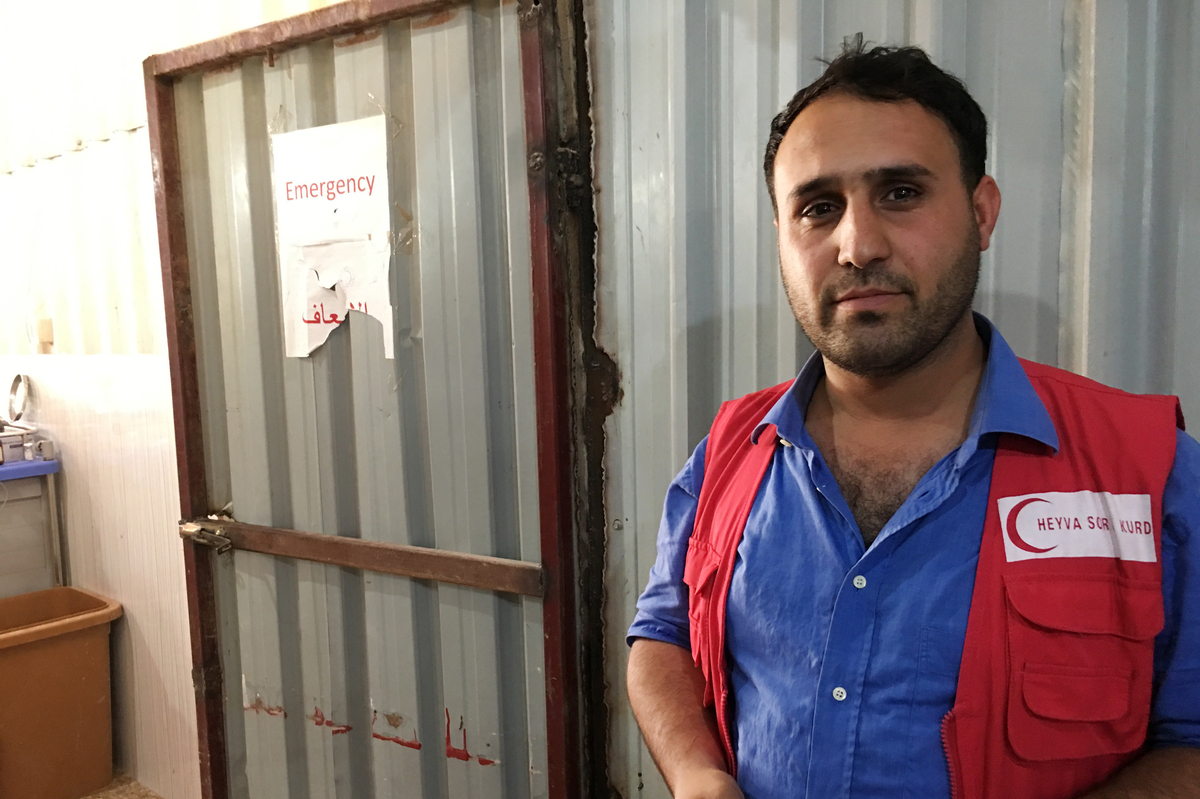 Massoud Ramo, a clinic director with the Kurdish Red Crescent, stands outside the organization's makeshift emergency room at the al-Hol camp.

"There is always a shortage of everything. There's a lack of supplies and the numbers of patients are huge," he says.

Each day, more than 100 children are brought to the clinic. A ceiling fan hanging from the corrugated metal roof moves air around the small room, packed with people. Women sit on the floor, waiting for their children to be seen.

In May, it's already 90 degrees, just the start of a season with much higher temperatures. The heat, along with inadequate water and sanitation, has raised fears of typhoid and other diseases sweeping the camp.

"Don't tell anyone you saw us here"

Five years ago, ISIS took over large parts of Iraq and Syria, declaring an Islamic caliphate that drew foreigners from all over the world to fight and live in it. The territorial caliphate was defeated in March, with a final battle in Baghouz.

Surviving fighters and their families were taken into custody by Kurdish-Syrian forces. The men ended up in jail; the woman and children put in the back of trucks to be taken to camps like al-Hol, where they are detained and waiting for their governments to decide what to do with them. Some 30,000 of the camp residents are Iraqi.

Iraqi and Kurdish-Syrian officials have met to come up with a plan for repatriating them, but fewer than 5,000 have agreed to go. Kurdish Syrian officials say they won't send back anyone to Iraq against their will.

Normally in a camp of this size, there would be plenty of international aid organizations eager to talk about the help they're providing. Here, even though most of the camp residents are children, there's been little help from the rest of the world.

Some international aid organizations that work in al-Hol prefer to remain under the radar, operating in the camp under a United Nations agreement along with U.N. agencies such as UNICEF and the World Health Organization — but without the direct approval of the Syrian government.

"Don't tell anyone you saw us here," a representative of one major aid group tells NPR.

One of the few major international groups operating in the camp, Doctors Without Borders, says residents of the foreigners' section in particular are not receiving proper medical care. More than 11,000 foreign women and children, believed to be mostly from North Africa and Europe, stay in a separate, heavily guarded section of the camp, known as the annex. Without a fixed clinic and without freedom of movement, some women are giving birth in their tents, the aid group says.

At the foreigners' annex, NPR saw dozens of women crowded around a steel gate leading to the larger camp, asking to be allowed out to the market and other services. Most were refused. Camp authorities said there was a shortage of guards to accompany the women.

The guards now tasked with protecting the women are from the same Kurdish forces that fought ISIS in Syria. Kurdish-Syrian officials say more than 11,000 of their fighters were killed fighting the militant group.

On NPR's visit to the annex, a Chechen woman emerged from a tent to ask for help for her son, who she said was injured and desperately needed an operation. NPR was not allowed by guards to speak with her at length.

"There's a clear distinction made between people in the third-country national annex and people in the rest of the camp," Will Turner, program manager for Doctors Without Borders, told NPR by phone from Amsterdam, referring to non-Iraqi foreigners.

Doctors Without Borders operates a mobile clinic in the foreigners' annex, but only recently has been given approval by camp authorities to open a fixed clinic.

"We initially did have a separate clinic for some weeks that was closed [by camp management] due to security concerns," Turner says.

Some women in the annex reported being threatened by more militant Russian and North African wives of ISIS fighters, who they said were trying to enforce ISIS rules within the camp.

Others said the guards conducted almost nightly raids on some sections of the camp, searching for phones and other contraband items, and shot in the air to scare children throwing rocks.

The camps are in Rojava, the Kurdish region of northeast Syria that broke away from Syrian government control, adding another level of complication for organizations operating there. The region's administration is not recognized by most foreign governments.

Turner says a wider problem is that some international donors have been reluctant to fund camp operations in general.

"It's been reported to us that donors are particularly having difficulty in supporting populations coming from ISIS-controlled areas," he says.

A Kurdish official in charge of camps says some Western aid organizations also tell her they can't fund projects because some of the families were connected to ISIS.

"Their excuse is that these are 'terrorist families' and they say, as humanitarian NGOs, they don't support terrorists," says Magda Amin, a director for the Kurdish-Syrian regional government.

The groups specifically named by Amin denied making those comments.

Several Western aid officials — who did not want to be identified to maintain their relationship with Syrian-Kurdish authorities — said those authorities were preventing aid organizations from scaling up their operations, particularly in the foreigners' section. Some said authorities had cited fears for the safety of aid workers.

Meanwhile, there are concerns from international aid officials that more children are dying than are being counted.

"The stories that people tell you make us very concerned that there are greater numbers of children, particularly, dying in the tents, than we actually really have an idea of," says Turner.