Accessibility links
Economic Cost Imposed On Women When Abortion Is Limited More states have adopted new restrictions on abortion in hopes the Supreme Court will revisit Roe v. Wade. That could have profound effects on the economic prospects for women seeking abortions. 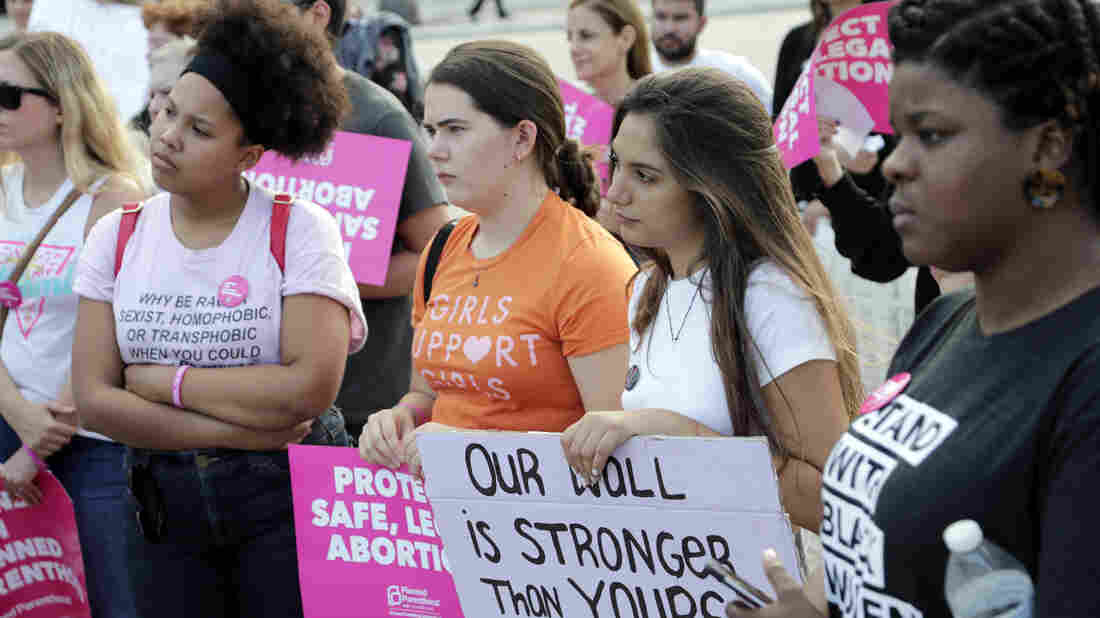 Demonstrators listen to speeches during a rally in support of abortion rights on Thursday in Miami. Lynne Sladky/AP hide caption 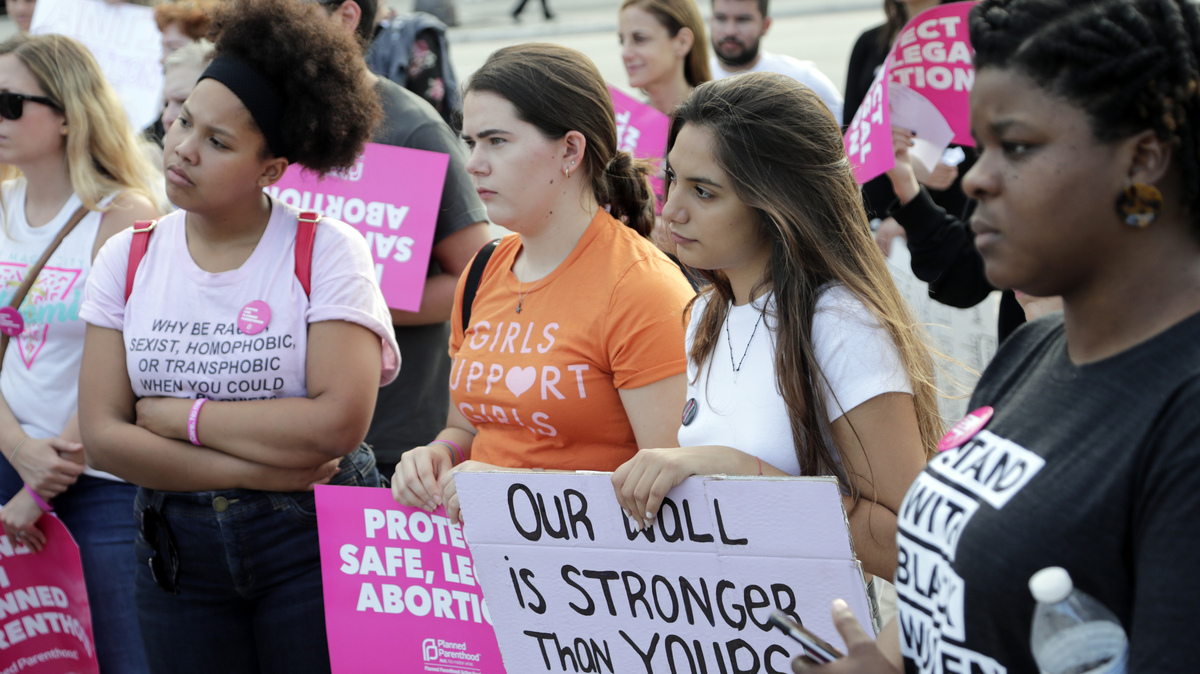 Demonstrators listen to speeches during a rally in support of abortion rights on Thursday in Miami.

As Republican-led states pass laws restricting abortion in hopes the Supreme Court will overturn its Roe v. Wade decision, supporters of abortion rights are pushing back.

Thousands of women who have had abortions have taken to social media to share their experience. Many argue they would have been worse off economically, had they been forced to deliver a baby.

"I didn't know what I would do with a baby," said Jeanne Myers, who was unmarried and unemployed when she got pregnant 36 years ago.

"I was horrified," she said. "I had no job. I would have been in no financial position to care for a kid."

By the time she knew she was pregnant, Myers was already in her second trimester — too late for an abortion in Janesville, Wis., where she lived. So she saved up her money for a trip to a specialty clinic in Madison, where a doctor terminated the pregnancy.

"I cried through the whole procedure," Myers recalled. "I had guilt probably for a year. But you know what? I don't regret it. Because if I hadn't had that procedure when I was young, I would not be where I am today."

Myers is among the thousands of women who have been sharing their stories under the hashtag #YouKnowMe in recent days, in an effort to reduce the stigma surrounding abortion and preserve the right for other women. They cite a wide variety of reasons for getting an abortion, but a common theme is the economic hardship that having a baby would have posed for both mother and child.

Amanda Payne of Durham, N.C., was just 15 when she got pregnant and totally unprepared to raise a child.

"I probably would have had to drop out of high school," she said. "My boyfriend, who ended up being my husband, he had low-paying jobs. We didn't have anything. I don't think my life would be what it is today if I had continued that pregnancy."

A study published in the American Journal of Public Health backs that up. Researchers reached out to more than 800 women who sought abortions around the country, including some who were denied because their pregnancies were too far along. The most common reason the women gave for wanting an abortion was they couldn't afford to support a child. Researchers then kept tabs on the women and their families for the next five years.

"When we actually look at the outcomes for women, we see that they were right to be concerned," said Diana Greene Foster, the study's lead author. "Because women who are denied an abortion and carry the pregnancy to term are more likely to be poor for years after, compared to women who receive the abortion."

Three out of four women who seek an abortion in the U.S. are already low-income. Foster, a professor at the University of California, San Francisco, argues that restricting their access just makes poor women poorer. After all, it's hard to work full time with a baby or toddler. And government safety-net programs don't make up for that lost income or the additional cost of an extra person in the family. About 10% of the women denied abortion in the study put their babies up for adoption.

Of course, to people with a strong moral objection to abortion, economic arguments are beside the point. Opponents often liken abortion to slavery. And just as abolitionists didn't worry about imposing unwanted costs on plantation owners, anti-abortion forces are not deterred by the high price of child rearing. But polls show most Americans don't hold such absolutist views about abortion. And with conservative state lawmakers challenging Roe v. Wade, economic research may provide important context.

"If the government is going to step into reproductive decision-making, it's going to have to consider the economic implications of doing that," Foster said.

She noted that many women seeking abortion already have other children. And many others want to have kids, once they're in better circumstances.

That was true of Myers, who had a baby daughter three years after her abortion. By that time she was married and both she and her husband were working.

"I wanted to give my kids the best I could. And I did," Myers said. "I didn't want to raise a child knowing I couldn't afford to do it."

Myers now has two grown daughters. And she worries that when it comes to timing child rearing, they may not have the same options she did.