Missouri Governor Signs Ban On Abortion After 8 Weeks Of Pregnancy

Missouri Governor Signs Ban On Abortion After 8 Weeks Of Pregnancy 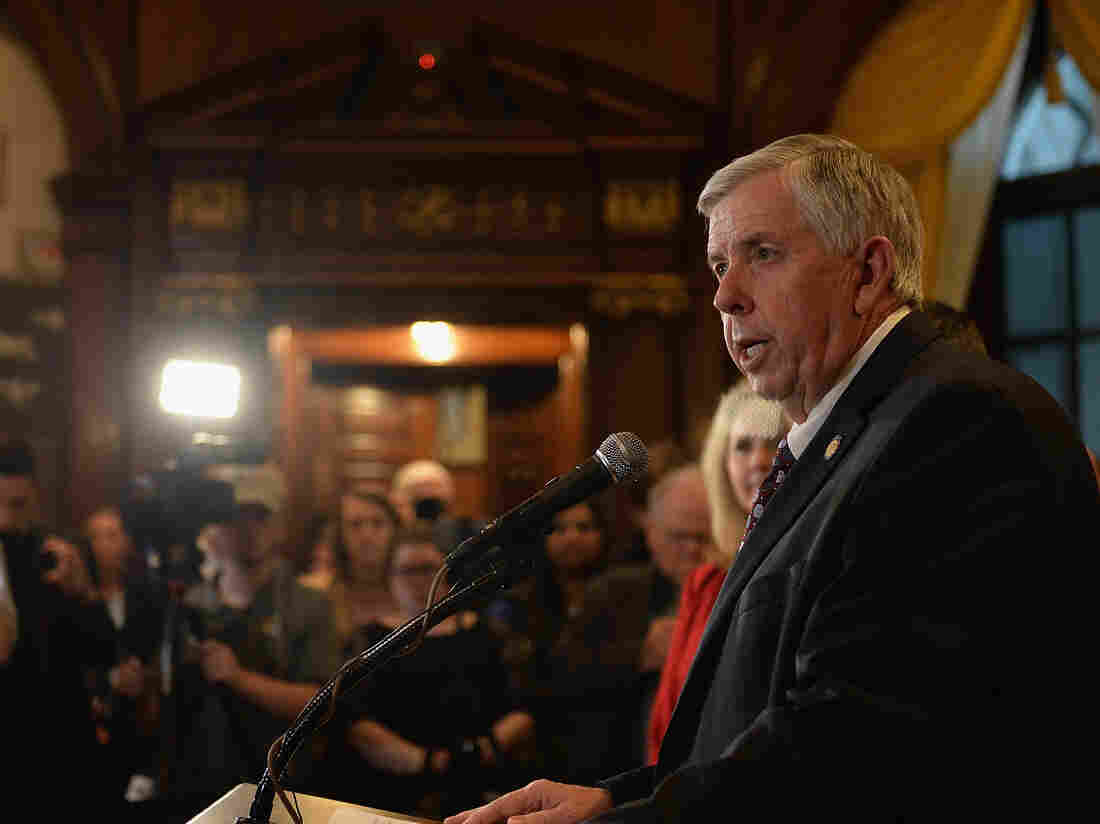 Missouri Gov. Mike Parson signed into law on Friday a ban on nearly all abortions after eight weeks of pregnancy. Michael B. Thomas/Getty Images hide caption 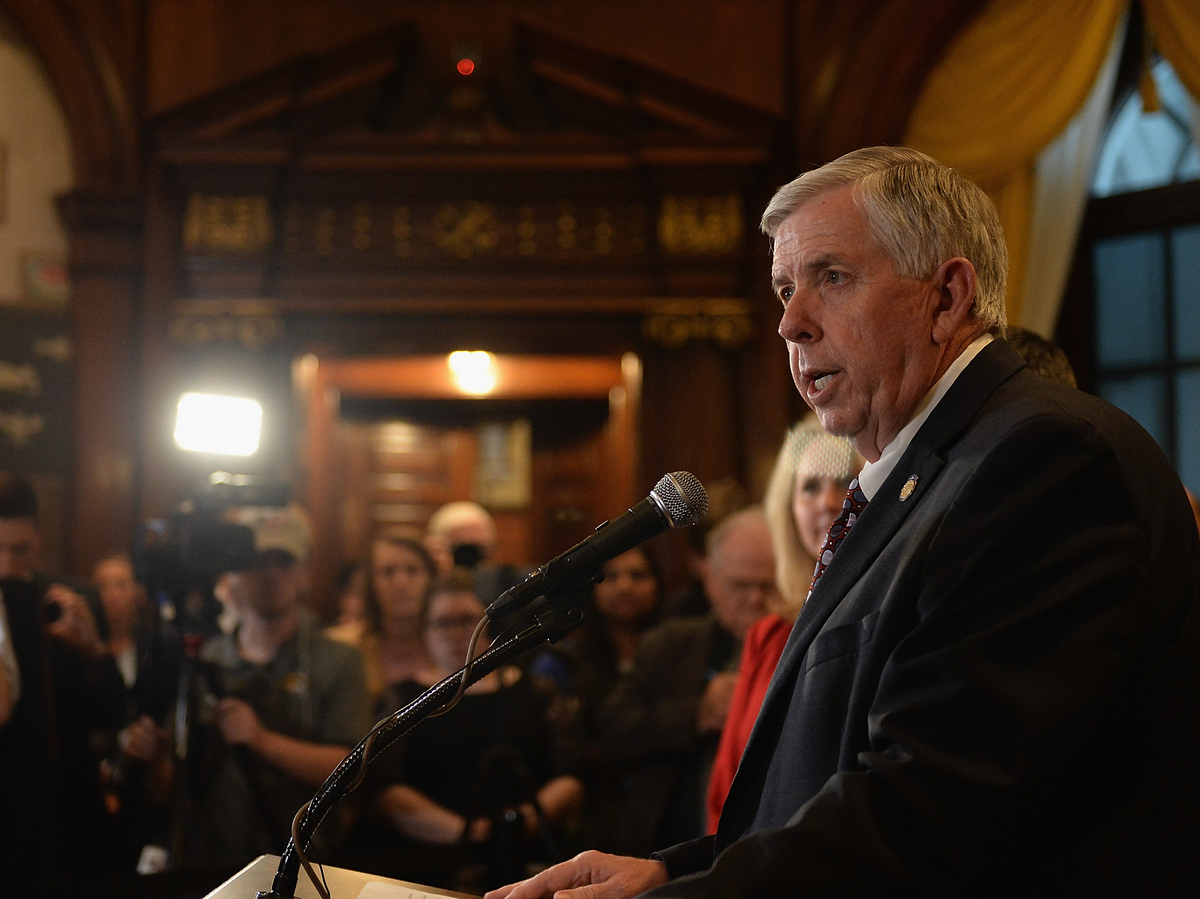 Missouri Gov. Mike Parson signed into law on Friday a ban on nearly all abortions after eight weeks of pregnancy.

Missouri Gov. Mike Parson signed a bill on Friday that criminalizes abortions in the state after eight weeks of pregnancy, the latest in a series of sweeping restrictions passed by Republican-controlled legislatures that now threaten nearly 50 years of federal protections for abortion.

Under the law, any person who performs an abortion after eight weeks — which is often before many women are aware they are pregnant — could be charged with a Class B felony punishable by five to 15 years in prison.

The final version of the legislation does not have exceptions for victims of rape or incest. It does have an exception for medical emergencies.

Parson, a Republican who has said he would like to make Missouri "the most Pro-Life state in the country," is the latest conservative governor to sign a far-reaching abortion restriction into law, presenting yet another possible challenge to Roe v. Wade, the landmark 1973 ruling establishing a woman's right to have an abortion. The Missouri Senate approved the measure just one day after Alabama's governor, Republican Kay Ivey, signed a bill that bans nearly all abortions and makes no exception for cases of incest or rape.

Supporters of the Missouri legislation say it is distinctive from the Alabama law in one significant way: It was not written to topple Roe v. Wade. Rather, its backers say, it's aimed at curbing abortions within the bounds of the law.

"We do not want to run through the courts and try to overturn Roe v. Wade like some of the legislators in other states, like Alabama. We just want to save as many lives as we can while withstanding judicial challenges," Missouri Rep. Nick Schroer, a Republican sponsor of the bill, told NPR. "We want to get as close to the line as possible on what previous judges have thrown out."

Other states, including Ohio, Kentucky, Georgia and Mississippi, have recently passed bills that forbid abortions when heartbeat activity is detected.

The Missouri law stipulates that if an abortion within the eight-week window is performed, the woman needs to be given the opportunity to view an ultrasound, but it is not mandatory that she view it.

The bill, HB 126, known as the Missouri Stands for the Unborn Act, passed both chambers of the General Assembly last week. Under the bill, women will be able to terminate a pregnancy after eight weeks only if they meet the law's definition of a medical emergency, which lawmakers defined as something that "so complicates the medical condition of a pregnant woman as to necessitate the immediate abortion of her pregnancy to avert the death of the pregnant woman or for which a delay will create a serious risk of substantial and irreversible physical impairment."

Before the bill's passage, protesters' shouts of "When you lie, people die" filled the chamber before they were escorted out of the building.

Over more than two hours of debate, Republicans and Democrats delivered forceful arguments about the bill, with Democrats — at times yelling and at other moments sobbing — attempting to persuade the body to reject the measure.

"This gives more rights to the rapists than it does to the mother," said Rep. Doug Beck, a Democrat. "This law is barbaric."

"This bill is not about pro-life; it is about anti-choice," Washington said. "Any time we are so disrespectful and immoral that we would force a woman to bring to life a child that is the result of a rape, an incest or sex trafficking, we are not thinking about life."

One moment of the debate lit up social media when Rep. Barry Hovis, a Republican and former police officer, shared his own experience investigating rape cases.

"Most of my rapes were not the gentlemen jumping out of the bushes that nobody had ever met. That was one or two times out of a hundred. Most of them were date rapes or consensual rapes, which were all terrible," he said.

After a public backlash from Democrats and legions on social media, Hovis apologized, saying he misspoke.

At a press briefing on Friday, reporters asked the governor why he supported an abortion ban that does not create exceptions for rape or incest victims; he deflected the question.

"Because I'm the governor of the state of Missouri, and that's what I do. If legislators send a bill to me, I'm going to sign it," Parson said. "I believe in the pro-life side of the issue," he said. "Does it meet what I believe to be constitutional in our state? I believe this piece of legislation does."

President Trump promised in his 2016 campaign to appoint Supreme Court justices who would undo Roe, but whether the slate of state bills striving to do that will be successful is uncertain.

With the U.S. Supreme Court now composed of five Republican-appointed justices who may be willing to reexamine long-standing precedent, the high court may someday accept a case that could alter the landmark case, though legal experts are doubtful the court will review such a case before the 2020 election.