Accessibility links
Germany Sees Threats To World Alliances As Nationalism Rises Abroad The worldview that nations should promote their interests over those of the international community poses a challenge for Germany, a country built on partnerships. 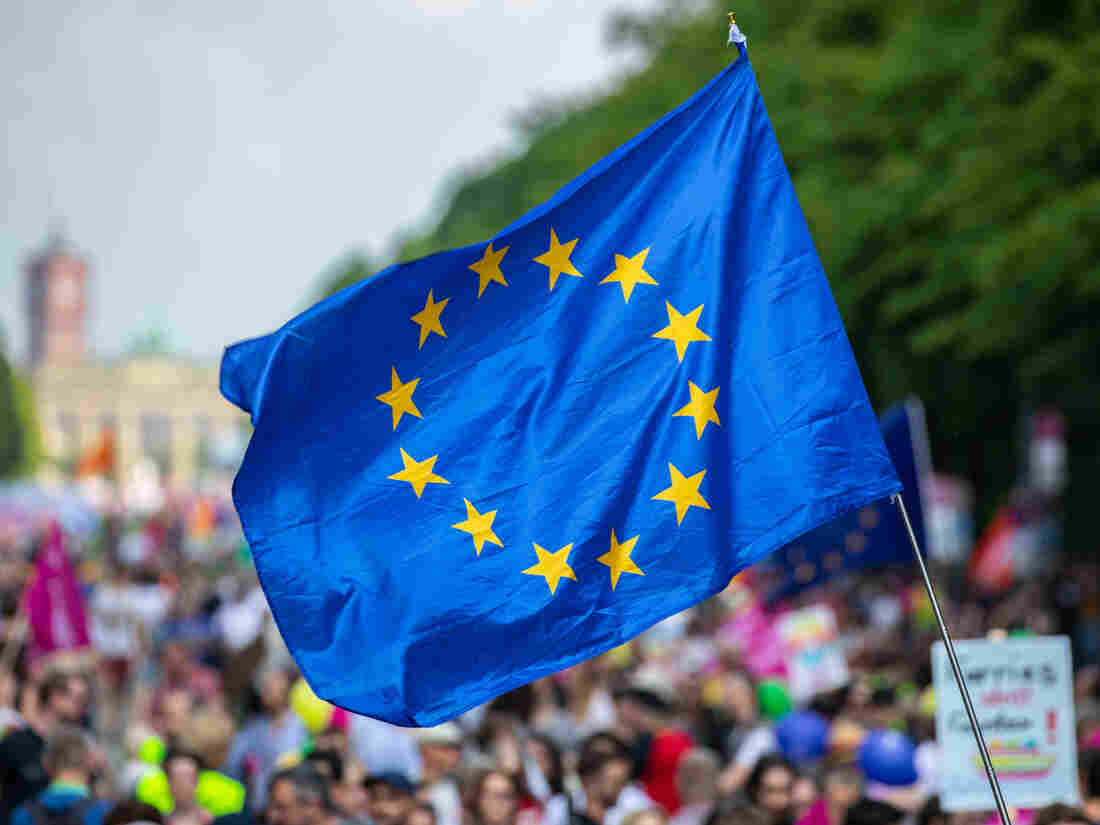 A protester waves the European Union flag during the pro-Europe demonstration "One Europe for All: Your voice against nationalism," a week before Sunday's European elections in Berlin, on May 19. Omer Messinger/AFP/Getty Images hide caption 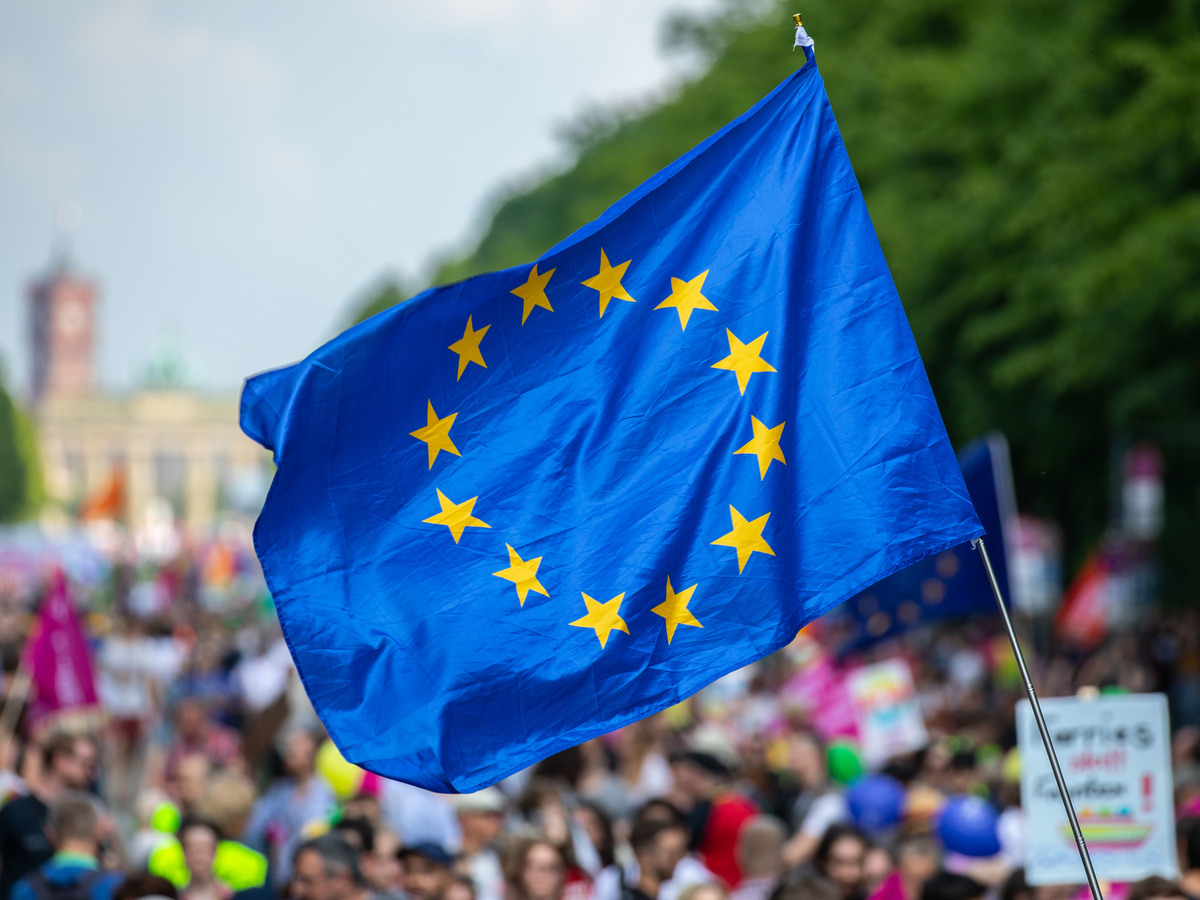 A protester waves the European Union flag during the pro-Europe demonstration "One Europe for All: Your voice against nationalism," a week before Sunday's European elections in Berlin, on May 19.

In Germany, the European Union's biggest cheerleader, the upcoming elections for the European Parliament are supposed to inspire unity.

Instead, nationalism is unraveling European unity. Populist parties that rail against immigration, globalist elites and the EU itself are expected to gain seats in the elections. The United Kingdom already voted on Thursday; Germany and most other EU states will vote on Sunday.

Across the Atlantic, President Trump, a self-proclaimed nationalist himself, questions the value allies and alliances.

This rising worldview — that individual nations should promote their interests over those of the international community — is especially challenging for Germany. After World War II, the country was rebuilt through partnerships and alliances, notably with European neighbors, the United States and NATO. Germany is now the biggest economy in the euro zone, and the biggest champion of what Chancellor Angela Merkel calls "shared European values."

"There are other countries who can go back to a more national conception of their own country in the international system," said Thomas Bagger, foreign policy director in the Office of the Federal President in Germany, speaking to a Library of Congress gathering in Washington last fall. "But for Germany, that doesn't really exist anymore because all these more national conceptions have all been contaminated in the Nazi years."

As if on cue before the European Parliament vote, one of Germany's most popular bands, Rammstein, released an album that features a growling, uncomfortable song called Deutschland. The electro-metal act belts out the lyric, "Germany, my heart's in flames. I want to love you and damn you."

The video for Deutschland is a graphic reel of Germany's violent history, including a controversial scene at a concentration camp. Jens-Christian Rabe, a pop music critic at the newspaper Süddeutsche Zeitung in Munich, has called out Rammstein in the past for using violent German stereotypes to sell albums.

This time, he says, the band seems to be sounding an alarm for Europe.

"When you take a look at Hungary or Poland or even Italy, you have a lot more successful right-wing parties, but they're on the rise over here, too," Rabe says, referring to the far-right Alternative for Germany, or AfD, party. "And that makes a song like Rammstein's Deutschland creepy."

'Washington Has Become Much Rougher': Germany Is Still Recalibrating With Trump

Rabe appreciates that his country has spent decades publicly reckoning with its past. But the rise of the AfD — whose co-leader minimized the Nazi era as a "speck of bird poop" in German history — shows that toxic nationalism is still a problem, Rabe says. The AfD is expected to win seats in the European Parliament in Sunday's election.

After the Allies defeated the Nazi regime in 1945, the U.S. helped rebuild Germany's devastated economy through the Marshall Plan. Still, a resurgent Germany was to be feared. Before he became NATO's secretary-general, Lord Hastings Lionel Ismay quipped that the alliance was created "to keep the Soviet Union out, the Americans in, and the Germans down."

Munich Security Conference Reveals A Growing Rift Between U.S. And Its Allies

Then-West Germany joined the security alliance in 1955 and went on to become a key member.

"Germany, as it stands today, would not be there without the permission and support [of] others," says Peter Beyer, the German government's trans-Atlantic coordinator. "We had support and permission to become a strong economy and become a superpower in the business world."

For years, Beyer says, Germans took their smooth relationships with partners as a given. Then came President Trump, who called NATO "obsolete" and complained loudly and repeatedly about Germany not paying its fair share of defense costs. With his slogan of "America First," Trump declared that German car exports hurt the U.S. and accused Chancellor Merkel of ruining her country by allowing in migrants.

"This administration, especially this president ... is very vocal about these things," Beyer says. "And they have a different style and approach that is very nasty."

Trump, like the populist politicians rising in Europe, has denounced so-called globalists. During a rally last year, he made clear what that meant.

"You know, they have a word. It sort of became old-fashioned. It's called a nationalist," he told the crowd. "And I say, really, we're not supposed to use that word. You know what I am? I'm a nationalist, OK?"

Claudia Major, a defense analysts at the German Institute for International and Security Affairs, compares the trans-Atlantic relationship to an ancient Greek temple. "Right now each pillar — foreign policy, defense, economics, trade and so on — has problems. It's all become unstable," she says.

It's an unsettling time even for German youth who have no memory of World War II or the Cold War, but have been raised with an identity as much European as German.

Near Unity Square in Potsdam, just outside Berlin, 18-year-old Henry Schultz grew up hearing from his grandparents and parents about the war and living in a divided Germany.

"I'm proud to live in the European Union," says Schultz, who runs a large Rammstein fan page on Instagram. "I've learned it's a place where we work together with others instead of fighting alone.