Accessibility links
StoryCorps: A Survivor Remembers The 1983 Beirut Bombing Navy hospital corpsman James Edward Brown wasn't far from U.S. Marine barracks in Beirut in 1983 that were the target of a terrorist attack. At StoryCorps, Brown remembers what he saw that day. 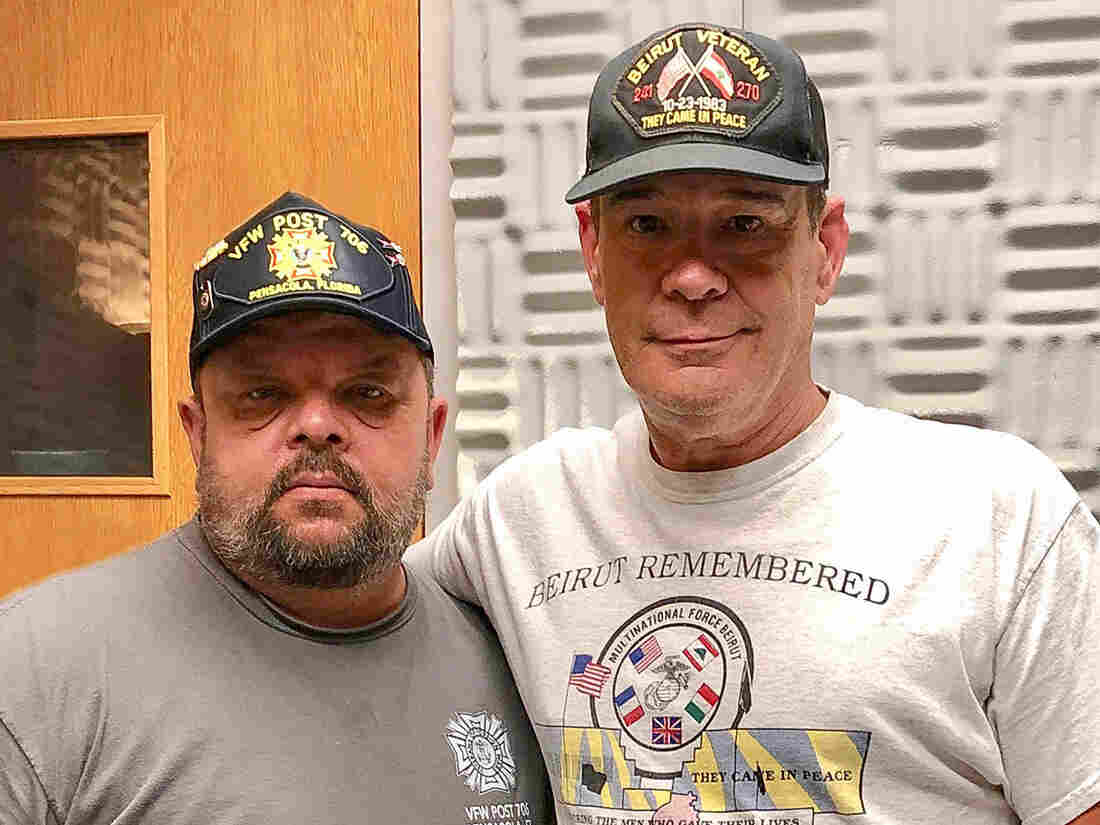 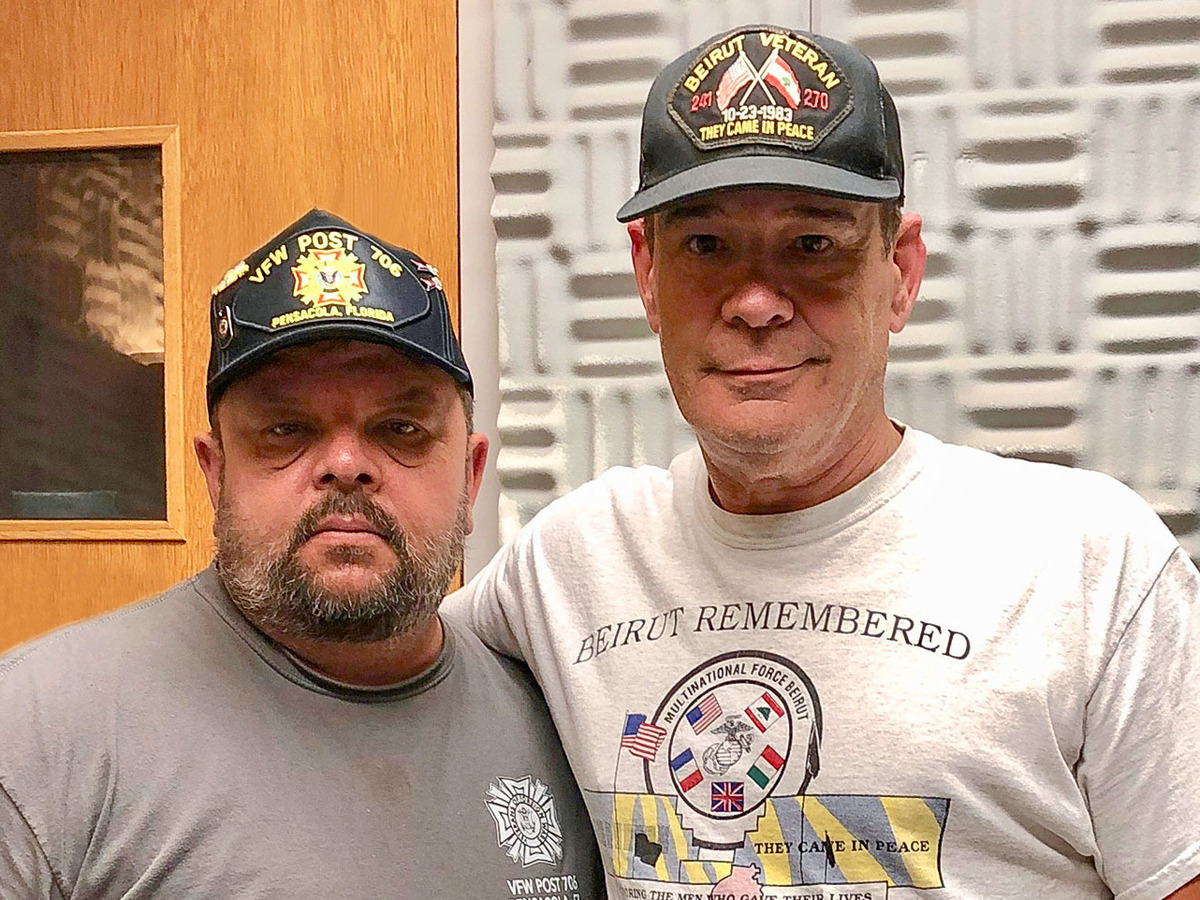 At StoryCorps last month in Pensacola, Fla., Mike Cline (left) interviewed his friend and fellow veteran, James Edward Brown, who survived the deadly 1983 bombing of the Marine barracks in Beirut.

Editor's note: This story contains some graphic descriptions of injuries that some readers may find disturbing.

When a bomb detonated at the U.S. Marine barracks in Beirut, Brown was at his post in the sick hall on the Marine compound — about 200 yards away.

At the time, 1,800 Marines were stationed in the city during the Lebanese Civil War.

On a visit to StoryCorps last month, Brown's friend and fellow Beirut veteran, Navy hospital corpsman Mike Cline, interviewed him about that day.

"I woke up to myself falling on the floor to the crash of isopropyl alcohol bottles and a gust of wind coming through the windows," Brown, 59, told Cline, 55. "I got up and put my boots on and my flak jacket and ran out ... and didn't know what to expect."

Early that morning, a truck bearing what the Department of Defense says was the equivalent of 20,000 pounds of TNT was set off at the Marine barracks entrance, where an estimated 400 Marines were sleeping.

It was the first of two truck bombs that killed 241 U.S. service members and 58 French paratroopers — part of an international peacekeeping force housed in two barracks buildings. It was the deadliest terrorist attack on Americans prior to Sept. 11, 2001. The U.S. government believes the Iranian-backed Lebanese militant group Hezbollah was behind the attack.

"There was a four-story building that was now one-story tall," he said. "The walls had been blown outward and the ceilings came down on top of each other, and everybody in the basement had been buried in rubble." 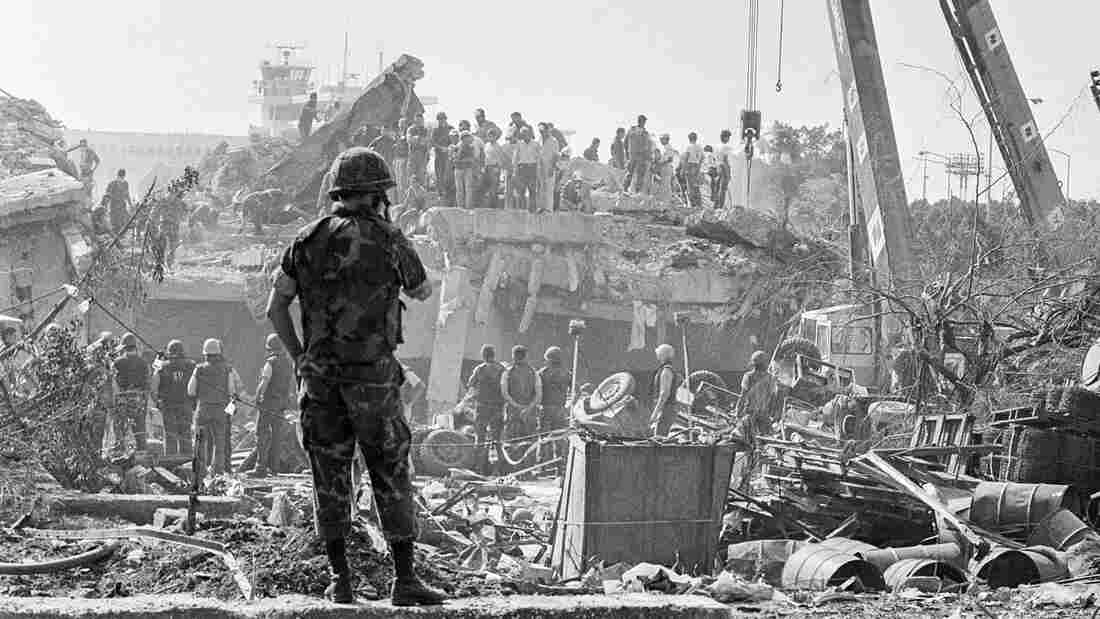 In October 1983, rescuers probe the wreckage of the U.S. Marine command building near the Beirut airport, a day after a terrorist attack killed 241 U.S. service members. Zouki/AP hide caption 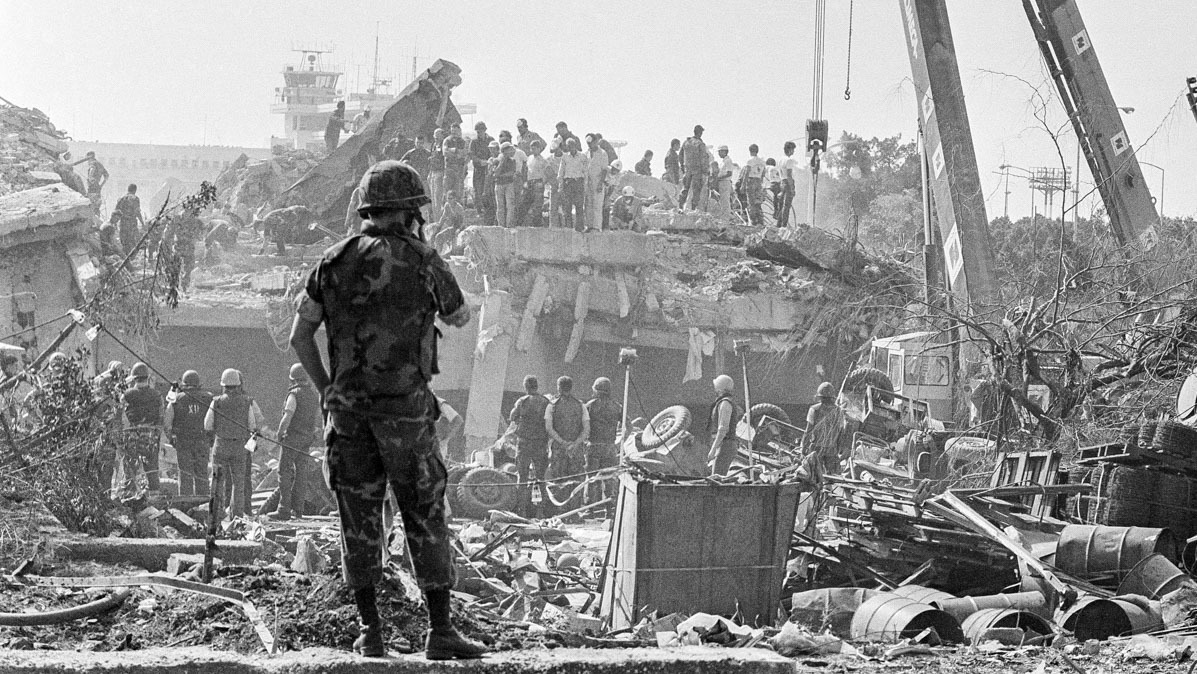 In October 1983, rescuers probe the wreckage of the U.S. Marine command building near the Beirut airport, a day after a terrorist attack killed 241 U.S. service members.

As a Navy corpsman, he carried medical supplies in what's known as a Unit One combat bag. Still, he wasn't nearly equipped to assist the immense toll of injuries.

"[It] had eight battle dressings, a chicken wire-framed splint ... and that was it," he said. "You can't treat very many casualties with that many bandages — not successfully."

He remembered a Marine flagged him down for medical assistance.

"He had a casualty laying on a stretcher with a chunk out of his forehead where his brain was exposed and a 45-pound piece of concrete on his chest with a rebar impaled into him," he said.

"I told the Marine that there was nothing I could do and jumped down off the truck and went to help other people.

Brown is still coping with the loss, but he and Cline said not many people remember what happened in 1983.

"It's amazing," Cline said. "There's very little in the history books about Beirut."

"So we kinda feel like we're a little lost, you know, at least I do," Brown said. "It's like, we went over there, got beat up, came home, and we don't talk about it very much. And I'm pretty angry about it."

The Beirut bombing was the largest loss of life in Marines history since the Battle of Iwo Jima in World War II.

Speaking a month before Memorial Day, Brown said, "Our 1,800 families from 35 years ago remember it today and every day."