Accessibility links
Interview: In 'Wine Country,' Amy Poehler's Girls' Weekend Is An 'SNL' Reunion For Rachel Dratch's 50th birthday, Poehler gathered her friends and fellow SNL alumni for a vacation to Napa Valley. For her directorial debut Wine Country, she basically did the same thing. 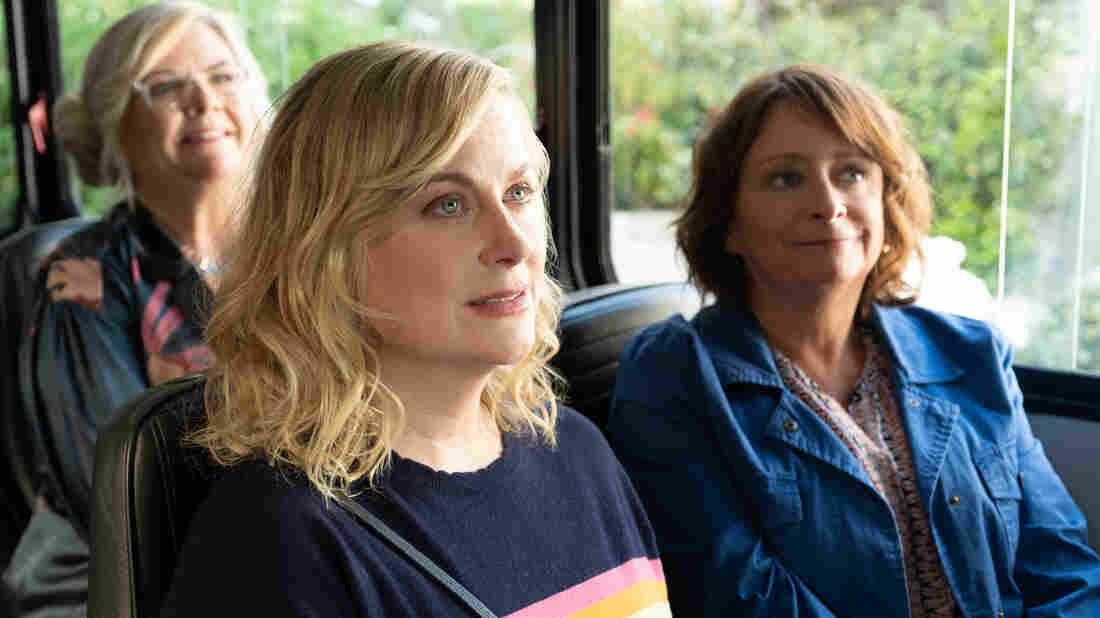 Amy Poehler (center) is the director and producer of Wine Country and stars in the film along with friends Paula Pell (left) and Rachel Dratch. Colleen Hayes/Netflix hide caption 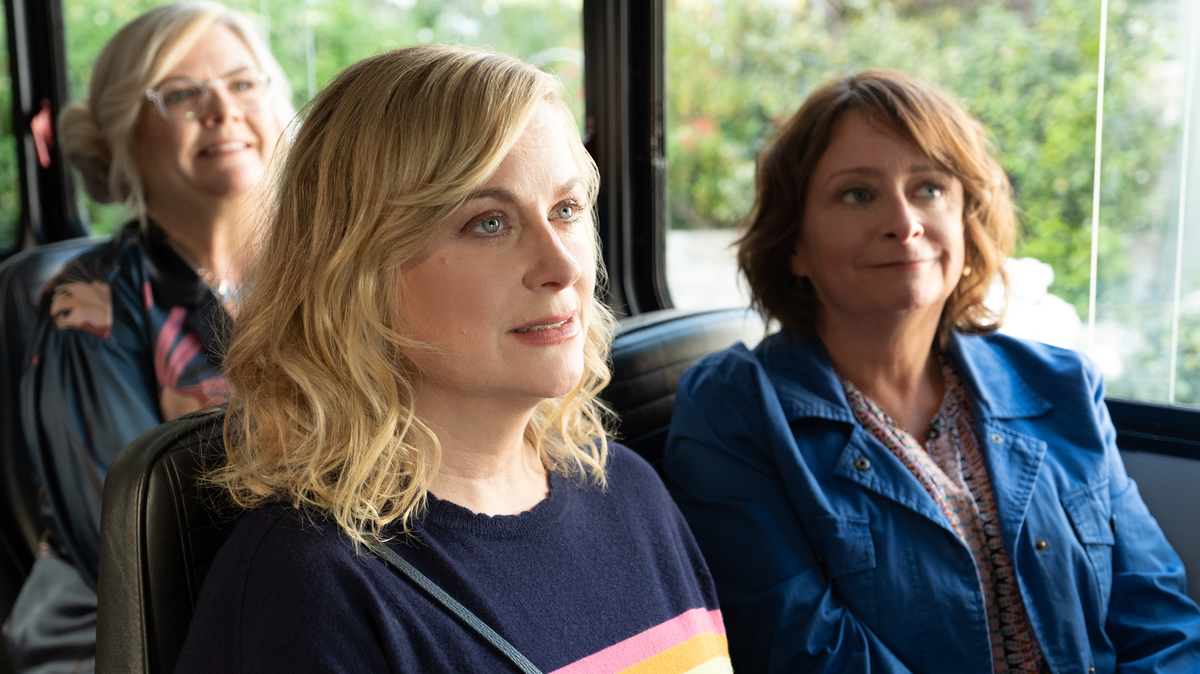 Amy Poehler (center) is the director and producer of Wine Country and stars in the film along with friends Paula Pell (left) and Rachel Dratch.

Amy Poehler's newest film is based on an actual girls' trip with her friends to California wine country. Except her friends — both in the movie and in real life — are fellow Saturday Night Live alumni such as Maya Rudolph, Ana Gasteyer, Tina Fey, Rachel Dratch, Paula Pell and Emily Spivey.

"I'm lucky to have some of the funniest people in the world be my actual friends," Poehler says in an interview. "And so I tried to quickly exploit that as fast as I could."

The real trip, a celebration of Dratch's 50th birthday, went mostly according to plan. The comedy film Wine Country does not.

Wine Country is the first feature film directed by Poehler, who also produced and stars in the movie. It's out now on Netflix.

On if she's actually the party planner in real life 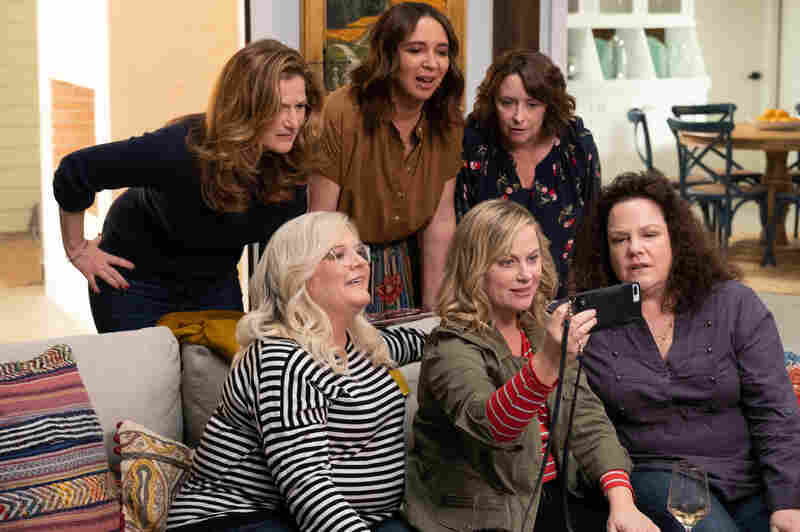 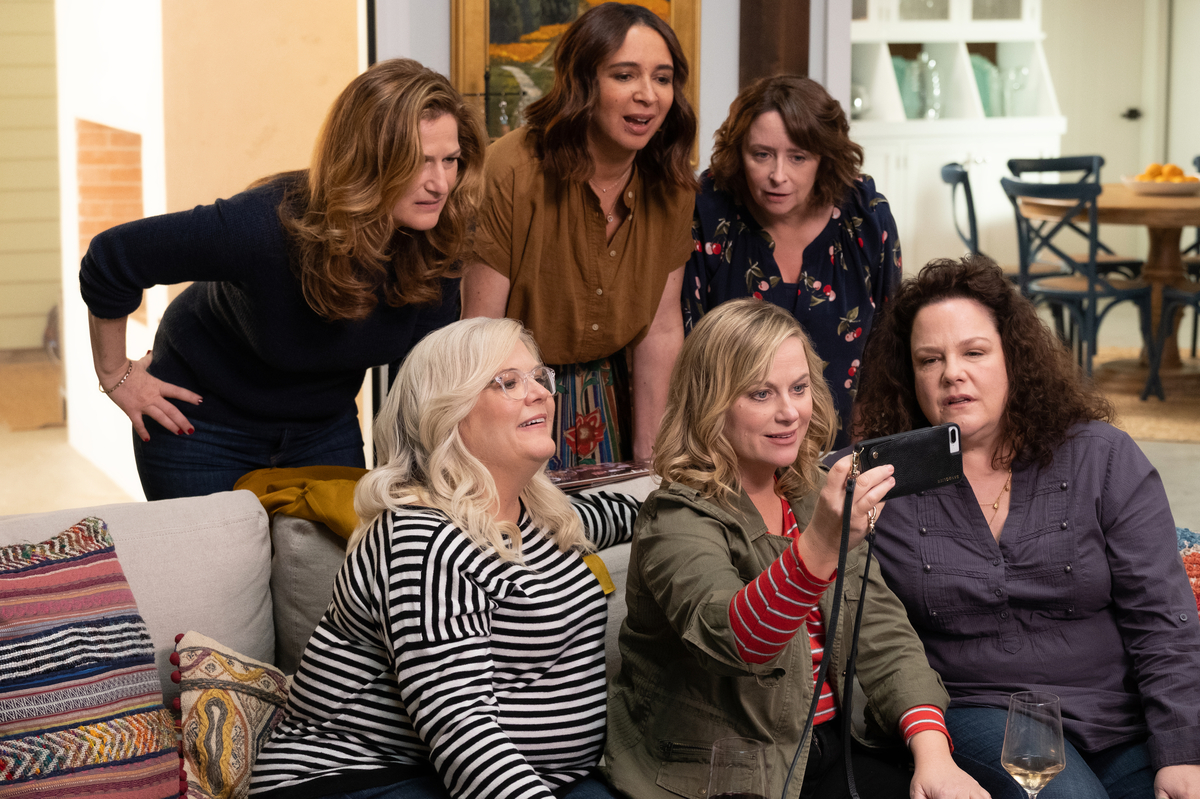 I think that who you are on a trip isn't always who you are in life. And so sometimes, a trip can bring out the wild side, or the neurotic side, or the planning side. And as my friends have told me, planning is my love language. So some people listen to your conversation, other people cook for you and some people tell you what you're going to do all day. But I do have a little bit of a sense that if no one's in charge, I'll take over, because I need a captain; I do well with a captain. So I certainly am not as Type A as that character, but I do like a loose plan — that I can gently force everyone to do.

Well, I do. That is a difference between me and my character. ... I worked in the restaurant industry for a long time; I was a waitress for many, many years. And a lot of people learn about wine when they're waiting tables. You know, you kind of swig whatever's left in the back with the cooks, and you say, "Mmm, this tastes good. This tastes free!" ... I do kind of dig all of the descriptions about wine and how it's made, because there's a certain writerly quality to how people explain wine, and there's a story behind it, and there's always a little bit of magic that you have to buy into.

But our characters in Wine Country couldn't give a hoot about what they're drinking — and in fact feel a little bit irritated every time someone's trying to explain wine to them. And we would laugh a lot as we were shooting the film because we were in front of these beautiful landscapes. We were in the Napa Valley, and just looking at these beautiful views and having these wonderful people talk to us about wine — and we were just cutting them off to talk about the mundanity of our own lives.

On middle-aged women on film

There's this interesting, great, unmined territory where you have young kids, aging parents; where you know who you are; you have a really good sense of yourself. You're not living in denial anymore; you have deep, deep friendships that have seen you through a lot of stages of your life. And so you have these interesting characters that sometimes just get flattened in art, or ignored. And we're really obsessed as Americans with the beginnings of things and the endings of things, and there's so much in the middle that I thought would be interesting to explore.

On bringing her CPAP machine to the film

Yeah, I don't know about your listeners, but anybody who's out there who has a snoring problem or sleep apnea, I'm telling you ... I would love to get you into a CPAP today, is what I'm trying to say. It has completely changed my life. Truly. ...

I've always been a terrible sleeper. I performed most of my career incredibly sleep-deprived. And when I — really, it's the best thing I've ever done for my health. So yeah, much like my friend Bradley Cooper, who used his real dog in A Star Is Born, I used my real CPAP machine in this movie.

On if she'd ever work on a dramatic movie

Oh, for sure, yeah. We wanted Wine Country to feel like it skated the edge a bit. And I don't think [comedy and drama] are very different. So while I will say that I think sometimes it's hard for a good dramatic actor to find a way to be funny, most of my really good comedic actor friends are very good at drama. ... I think the stuff that's coming (that I've been working on) doesn't neatly fall into any category, and that's exciting.

On if she's over the "girls' weekend" at this point

I think that female friendships are an untapped fossil fuel. I think they help run the world. They certainly help me orient to the world. And they're very precious to me. So in any way I can honor them, I'm up for it.

Danny Hajek and Arezou Rezvani produced and edited this interview for broadcast. Patrick Jarenwattananon adapted it for the Web.