Accessibility links
Joe Biden, Bernie Sanders Highlight Familiar Split In Democratic Party The former vice president is calling for unity and compromise, a restoration, of sort, of what Democrats view as normalcy. For Bernie Sanders and his supporters, that's hardly enough.

Bernie Sanders and Joe Biden are very much on each other's minds.

At his campaign rally in Philadelphia on Saturday, the former vice president went off script — twice — to deride a protester with a whistle.

"That must be Bernie or somebody," Biden apparently said, raising eyebrows and drawing laughs.

(The line is at 8:21 into this video. You can decide for yourself what he said.)

Minutes later, with Biden talking about unity and governing amid more background whistling, he used the whistler as a punchline.

"You know, there's serious work that has to be done," Biden said, "but it's not being done by a president who wakes up in the middle of the night and wages war on Twitter or like the guy on the whistle back there. Wonder whose campaign he's with."

In those two offhand remarks, Biden flashed a raw look at his view of the difference between himself and Sanders when it comes to governing – an adult seeking consensus or a kooky guy with a whistle.

Sanders, a senator from Vermont, swatted back the next day on NBC's Meet the Press, noting that while beating President Trump was "No. 1," that was "not enough."

And what's more establishment than the former vice president from an administration that many progressives lament as too incremental, too naïve and too wide-eyed about working with Republicans?

"There is this dynamic tension between wanting to win and wanting to be inspired," said Karen Finney, a top Democratic strategist who worked for Hillary Clinton's campaign, on Stacey Abrams' gubernatorial campaign in Georgia in 2018 and is now working for Higher Heights, an organization working to elect black women.

Finney, though, notes that Biden has appeal among Democrats because he represents something of a soothing balm, an antidote to almost three years of a hard departure from normalcy, in the view of Democrats, many independents and some Republicans.

"Part of wanting to win is there is a mood in the country for, I don't like to say going back to normalcy, but to establish a new normal that you feel confident that the person in charge knows what he's doing or she's doing," Finney said. "And there's something about Biden, partially because he has the experience on the big stage with Obama that reminds you what that's like."

That is likely why Biden — so far in this very early stage of the primary — is comfortably ahead in surveys of Democratic voters.

"The disadvantage, if you want to call it that, for Biden is voters do want a new face of the party, a younger face of the party," said Adam Hodge, a Democratic consultant, who was an Obama administration and Democratic National Committee spokesman. "But all of that is secondary to who is the best person to beat Donald Trump next November. And who can amass a large governing coalition to actually get things done. A majority of the Democratic Party do want a president to not only win, but also get things done."

Governing and consensus-building are things Biden has been harping on.

"Well, I'm going to say something outrageous: I know how to make government work," Biden said Saturday, adding, "I helped make this government work before. And I can make it work again. To me, our principles must never be compromised. But compromise itself is not a dirty word. Consensus is not a weakness — it's a necessity. It's how this government was designed to work."

That is not popular with progressives who want bold change, and they don't trust Biden to hold the line on those principles.

"I will be damned if the same politicians who refused to act then [in recent decades] are going to try to come back today and say we need to find a middle-of-the-road approach to save our lives," progressive star Rep. Alexandria Ocasio-Cortez of New York said after hearing Biden could be crafting a "middle-of-the-road" climate change approach.

The split comes down to unity versus anger, restoration versus revolution.

"It's a political revolution" that's needed, said Larry Cohen, head of Our Revolution, an outside group supporting Sanders that grew out of his 2016 campaign. "Restoration in this country — what period are we going to go back to? The period of Jim Crow? State militias? We are moving forward, not restoration. To build a democracy here, it has to be inclusive — in a meaningful way."

There are warning signs for both Biden and Sanders. The Democratic takeover of the House was fueled in 2018 by women. And a Pew poll out Thursday found that women, especially those under 50, were far less enthusiastic about voting for a white male than for a woman. 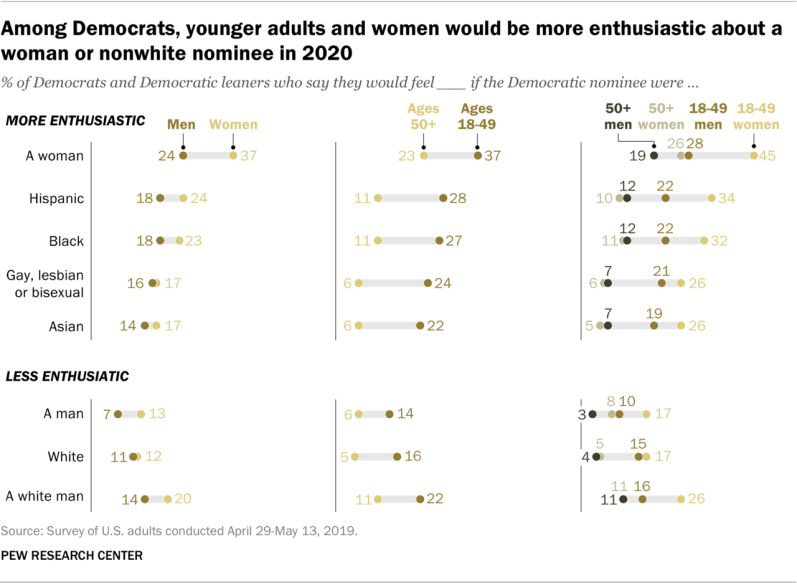 And there are nearly two dozen candidates for Democrats to choose from, including prominent women like Sens. Kamala Harris of California, Elizabeth Warren of Massachusetts, Amy Klobuchar of Minnesota and Kirsten Gillibrand of New York, who will be fanning out this Memorial Day weekend from Iowa to New Hampshire.

So far, Biden and Sanders have stood out, but the campaign is about to enter an important next phase; debate season begins next month. Those events will be, for many voters, their introduction to some of these candidates – and someone could break out.

"This is why the debates are going to be so important," Finney said, "because, right now, it's hard to get a sense of their strength in terms of how they're doing with voters, because there are 23 of them. ... Seeing how they engage each other will give us a lot more information on the strength of these candidates."

At the end of the day, though, despite the very real and clear divisions, party strategists believe the party will come together because of Trump.

"One of the most galvanizing forces in American politics in recent history is the Trump presidency," Hodge said. "And I think Democrats, regardless of who the nominee is, will absolutely unite behind whoever we nominate."

Case in point, Cohen said of Biden, "If he's the nominee," his group "will support him enthusiastically. At the end of the day, elections are binary. It's like a light switch, I want the light on. It's not a close call. There's a huge difference between Vice President Biden and Donald Trump."

That said, he added, "Now is the time to talk about what kind of nation we can be, and what can we get done — and let's aim higher."