Accessibility links
U.K.'s Theresa May Resigns Acknowledging Failure To Deliver Brexit Theresa May's term as prime minister has been one misstep after another, starting with calling an early election that left her weakened and without support to negotiate the U.K.'s exit from the E.U. 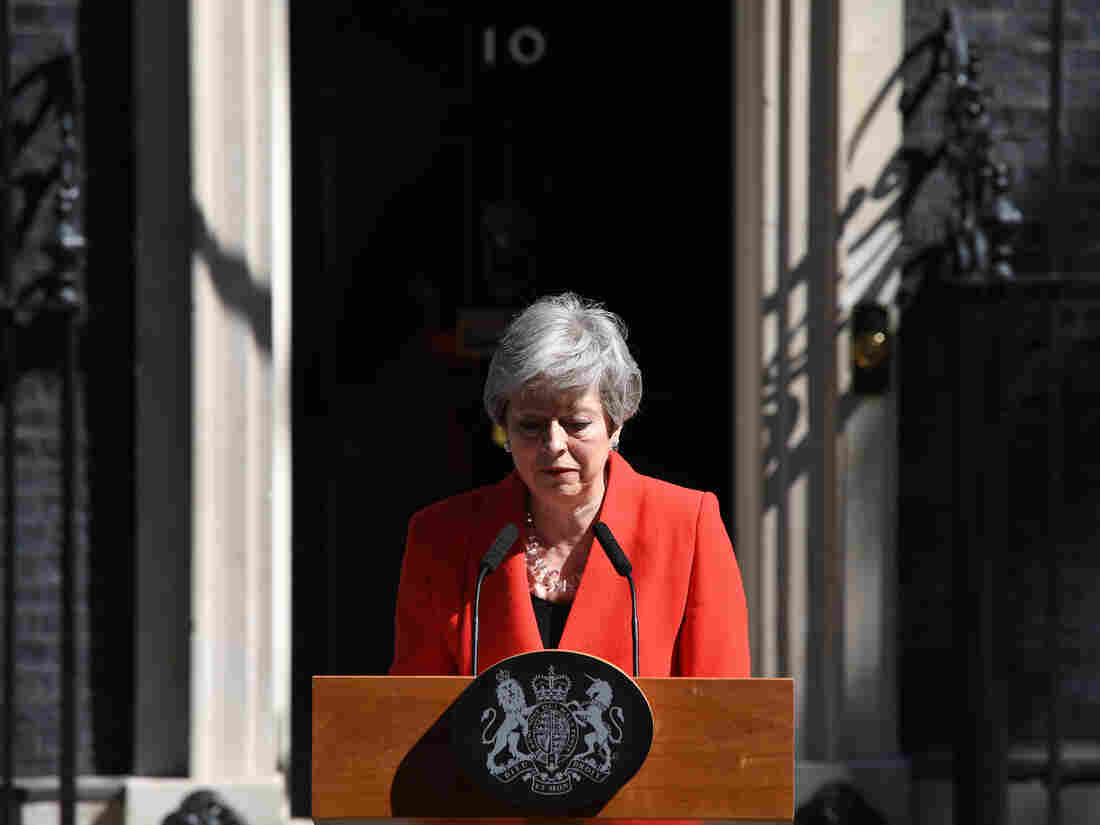 Prime Minister Theresa May announces her resignation outside No. 10 Downing St. in London on Friday. Leon Neal/Getty Images hide caption 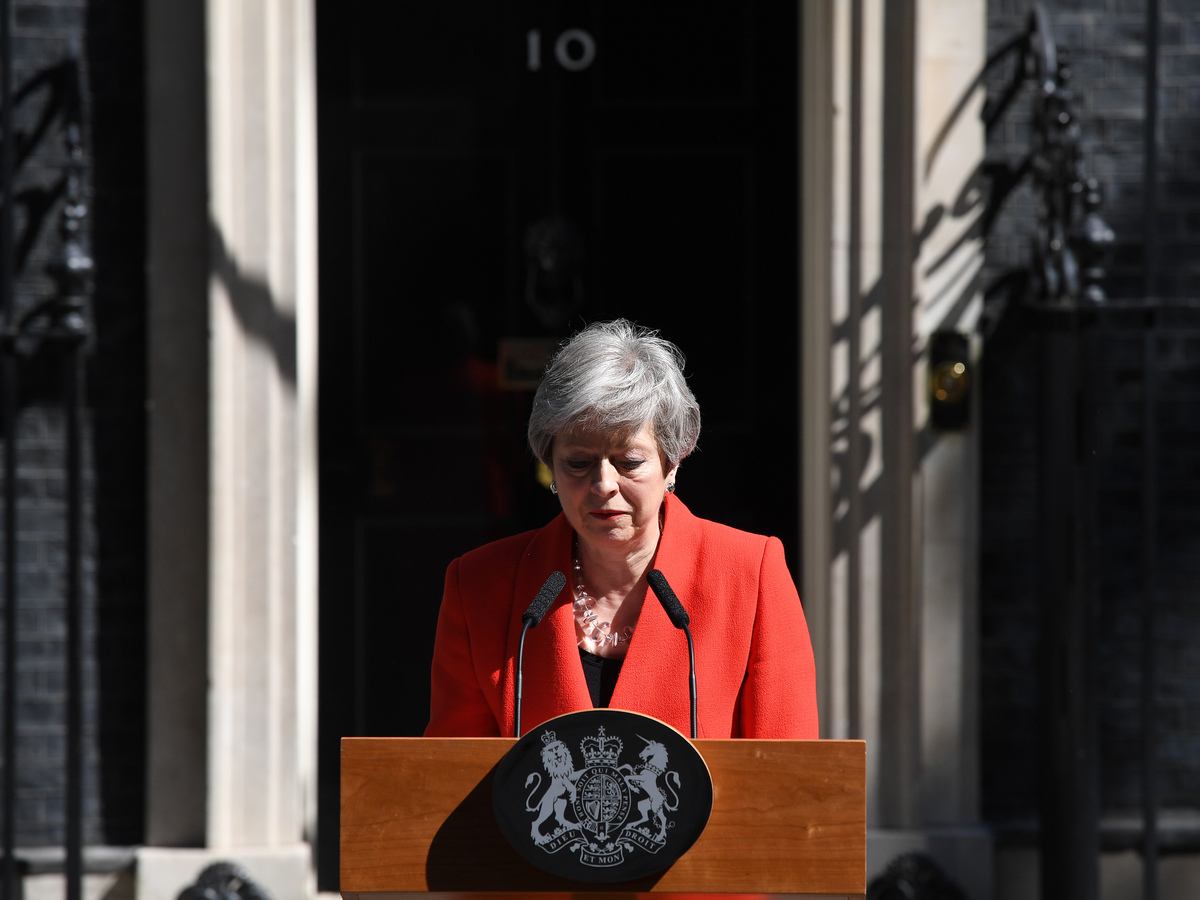 Prime Minister Theresa May announces her resignation outside No. 10 Downing St. in London on Friday.

"It is and will always remain a matter of deep regret to me that I have not been able to deliver Brexit," said May, standing at a podium in the sunlight outside No. 10 Downing St. in London.

Intentionally or otherwise, May was summing up her legacy as most here see it today. She is the prime minister who spent nearly three years trying to honor the result of the landmark 2016 Brexit referendum and, despite a relentless effort, failed.

In the summer of 2016, May thought she was the right person at the right moment. British voters had stunned the world and voted to take the U.K. out of the European Union. Then-Prime Minister David Cameron, who had called the vote for political reasons — never thinking it would actually pass — resigned.

Boris Johnson, the former mayor of London, emerged as the front-runner to replace Cameron, but Johnson's own campaign manager publicly torpedoed his efforts, leaving May the only viable candidate left standing. Many believe running for prime minister was May's first big mistake.

"It was entirely a poisoned chalice," says Nicholas Allen, who teaches politics at Royal Holloway, University of London. "The odds were always stacked against her. No prime minister, certainly since 1945, has faced such a large set of challenges with simultaneously such a hugely divided, unleadable party."

She had to contend with Scottish National Party leaders who were angry about Brexit and threatening to hold a second independence referendum that could split the United Kingdom. Brexit also threatened the future of the Irish border because it would create two separate economies on the island of Ireland where there has been just one.

May had to negotiate a divorce agreement with the EU after more than four decades of integration and try to steer the deal through a Parliament and a Conservative Party that were deeply split. Lawmakers who had voted to stay in the EU were pitted against hard-core Brexiteers, who wanted a clean break with Europe despite the economic damage it could cause the country.

"We have the challenge of Brexit, and Brexit does mean Brexit, and we're going to make a success of it," May said in July 2016, trying to strike a confident tone.

But the next year, she made an error from which she never recovered. Determined to increase her majority in Parliament to push through a Brexit deal, she called an early election.

"The choice at the election is clear," she told British voters in April 2017. "Strong and stable leadership with me in the national interest or a hung parliament and coalition of chaos under Jeremy Corbyn," the leader of the opposition Labour Party.

May's decision did not seem like folly at the time. The Conservatives were way ahead in the polls and many expected they would rack up big gains in the elections. But Corbyn proved formidable and many voters found May to be a dreadful campaigner, as she repeated slogans, including "strong and stable," that won her the nickname the Maybot and inspired memes and remixes on the Internet.

On June 8, 2017, as the results came in on election night, it became clear May had made a big miscalculation. The Conservatives lost their majority. The party was forced to enter into a deal with the Democratic Unionist Party of Northern Ireland to pass major legislation.

At times, the prime minister seemed hapless. At the Conservative Party conference that fall, she suffered a coughing fit that went on and on. As she struggled, letters from the party's slogan fell off the wall behind her. The Conservatives' message was literally and figuratively falling apart. At the party conference in 2018, May joked about the debacle.

"I've been up all night super-gluing the backdrop," she said to the laughter of fellow party members.

In negotiations last year, the EU pressed May to accept the U.K. remaining in a temporary customs arrangement to avoid a hard border on the island of Ireland. Many in Parliament saw it as a threat to British sovereignty and the House of Commons defeated the deal by a historic margin of 230 votes.

May brought the agreement back twice more, only to see it fail, in what began to feel like the political equivalent of the Bill Murray comedy Groundhog Day. Britons came to refer to their country's political situation as an "omnishambles."

During Thursday's European parliamentary elections, U.K. voters expressed a mix of sympathy and exasperation with the prime minister.

"I feel sorry for her in one way," said Warwick Bird, a former financier, who lives in Watford, a town north of London. "But if I'd been doing it, I'd have thought, 'I can't carry on doing this anymore, I'm just beating my head against a brick wall.'"

On Friday, May announced that she will step down on June 7. She will remain as caretaker prime minister over the next two months while her party chooses a successor.

May is often regarded as reserved, rigid and businesslike. But she concluded her resignation speech Friday morning by showing a vulnerable side she had all but hidden from British voters.

"I will shortly leave the job that it has been the honor of my life to hold," she said, adding with pride, "the second female prime minister, but certainly not the last."

"I do so with no ill will, but with enormous and enduring gratitude to have had the opportunity to serve the country I love."

With those final words, May's voice cracked and tears filled her eyes. She then turned and retreated behind the door of No. 10 Downing St.