Accessibility links
European Elections Will Be A Test For Nationalist Parties Hoping To Remake The EU "I believe this is the first time since the beginning of European integration that this European Union could actually break apart," center-left Dutch politician Frans Timmermans warned this month.

Listen · 4:16 4:16
European Elections Will Be A Test For Nationalist Parties Hoping To Remake The EU 4:16 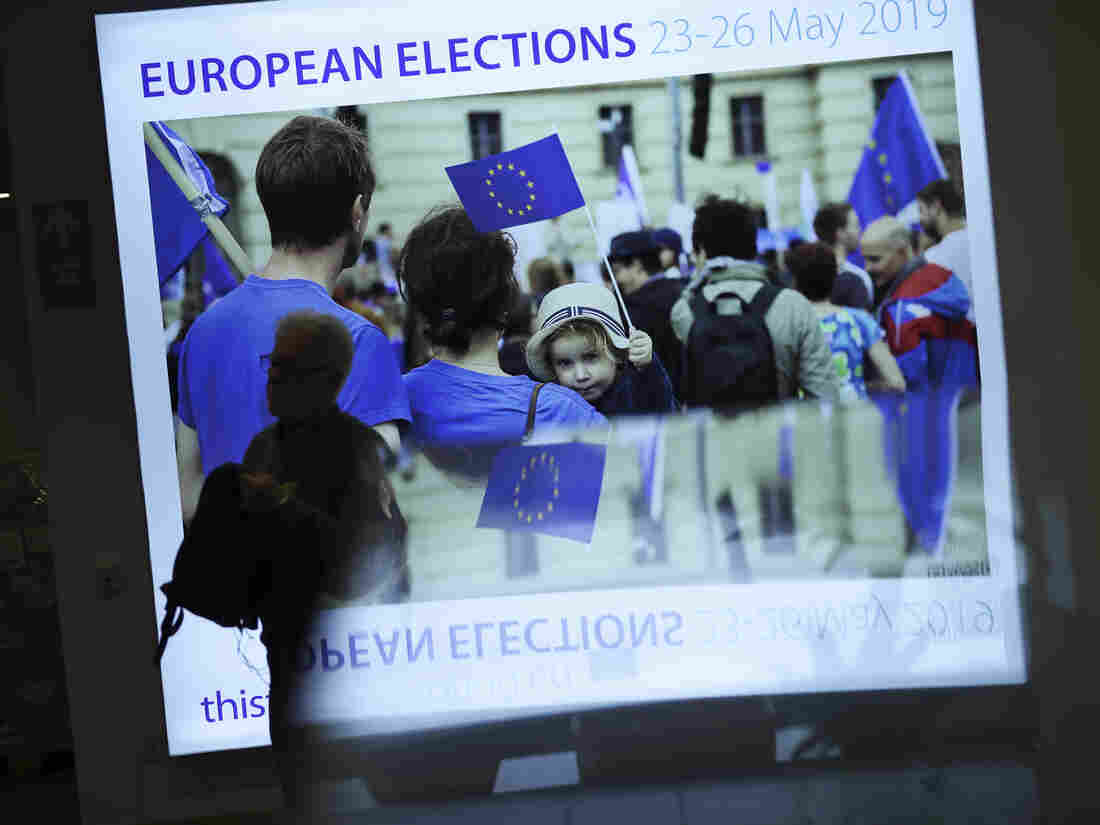 A man walks past a board announcing elections at the European Parliament in Brussels on Wednesday. Some 400 million Europeans from 28 countries are eligible to vote. Francisco Seco/AP hide caption 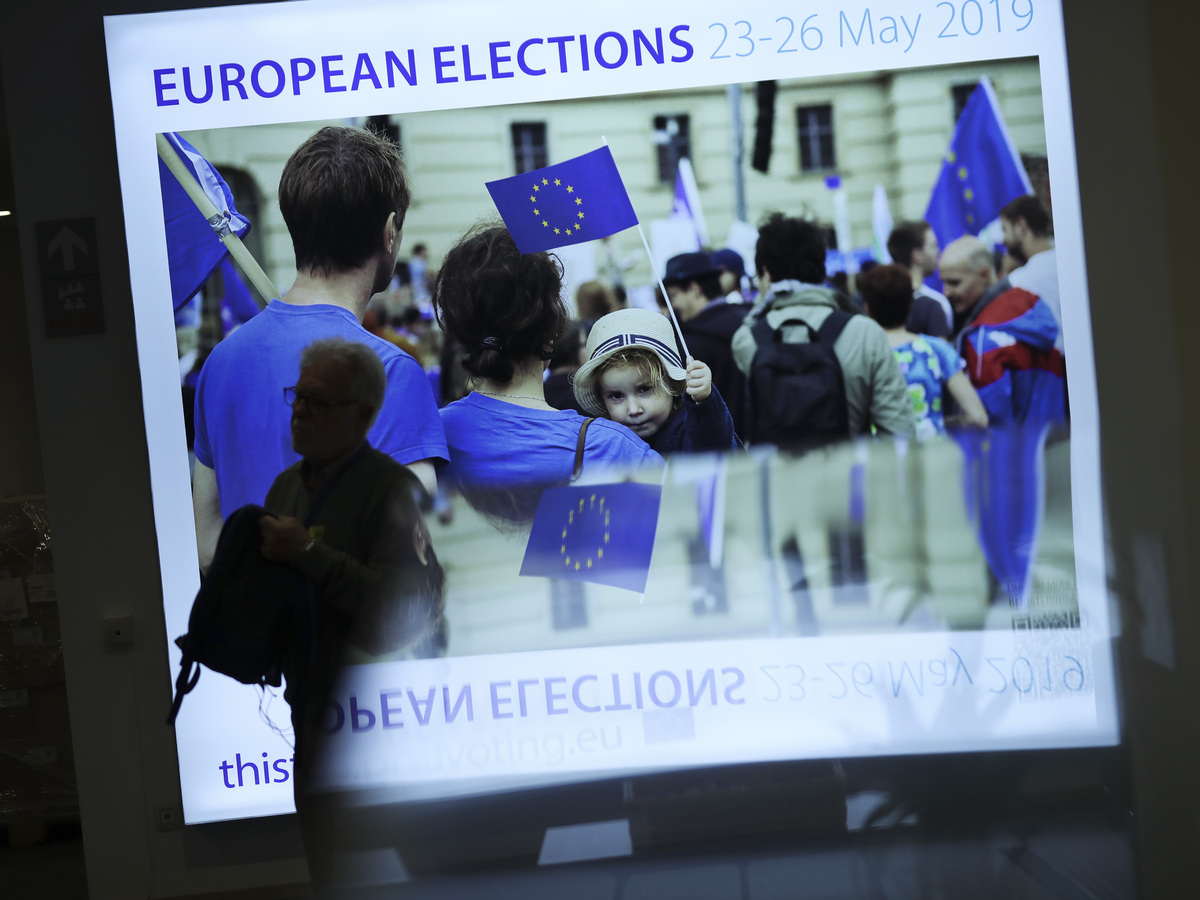 A man walks past a board announcing elections at the European Parliament in Brussels on Wednesday. Some 400 million Europeans from 28 countries are eligible to vote.

Some 400 million people in 28 countries are eligible to vote in this week's elections for new representatives for the European Parliament — the only popularly elected European Union institution. It's normally a low-turnout affair, but this year, the Europe-wide result will be a crucial test of strength for nationalist and populist parties that want to remake the EU — and for those who oppose them.

"If we screw this up, none of us in this room can look our children in the eye anymore. If we screw this up, we screwed up for generations," warned pro-EU center-left Dutch politician Frans Timmermans at a conference held in Florence, Italy, earlier this month.

Timmermans, a Socialist, is a mainstream candidate who's hoping the incoming European Parliament will make him president of the EU executive body, the European Commission. He's currently a vice president, part of the EU establishment in Brussels.

One of Timmermans' rivals is German center-right candidate Manfred Weber, who struck a less alarmist tone in Florence.

"The essence of Europe is compromise," said Weber, "that readiness to sit together and find a common understanding for the future. And to do so, I think we need optimism. We can be proud about what we achieved and we can go further."

Guy Verhofstadt, a Belgian and one of several candidates of the centrist Alliance of Liberals and Democrats for Europe, wants to go much further — toward single, common fiscal and foreign policies as part of a more federal Europe.

"Today, the European Union doesn't exist, really," said Verhofstadt. "It's still a confederation of nation-states, and is always acting too late when something is happening."

While differing on methods, policies and timetables, all three candidates fit squarely in the pro-EU camp, which bemoans the unwillingness of member states to forge transnational common policies on issues such as migration, security and data-sharing. 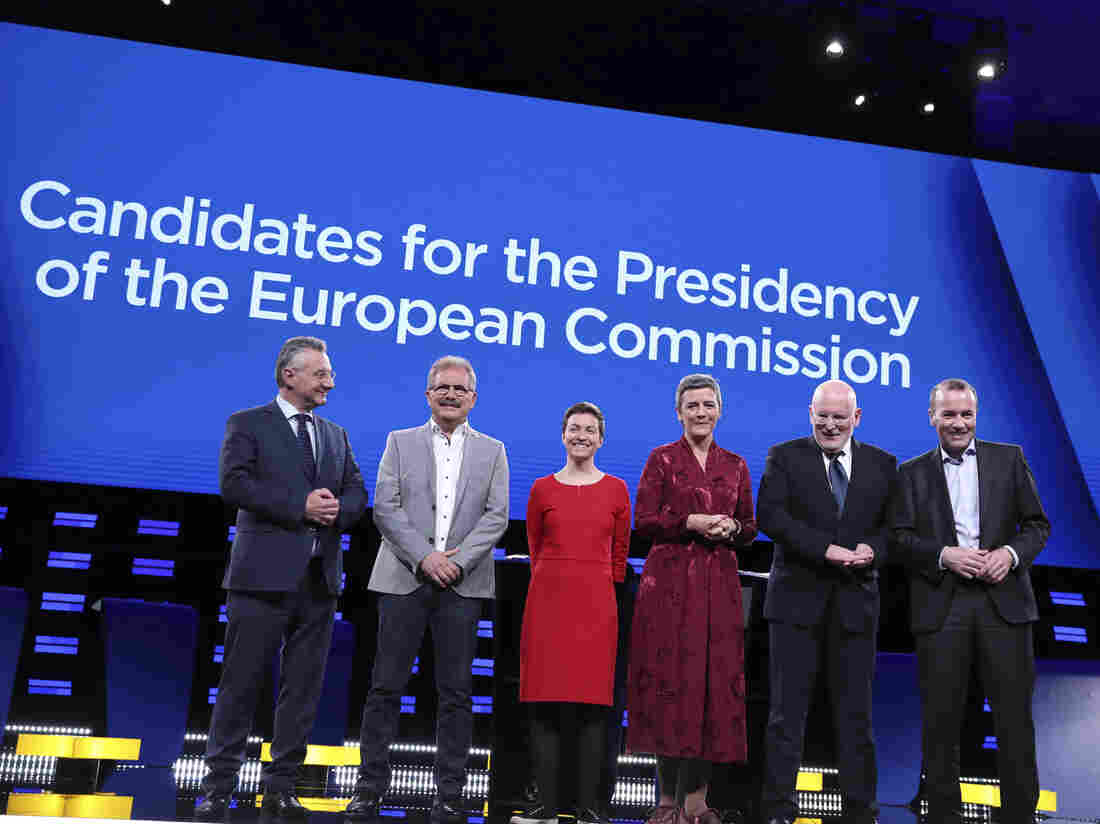 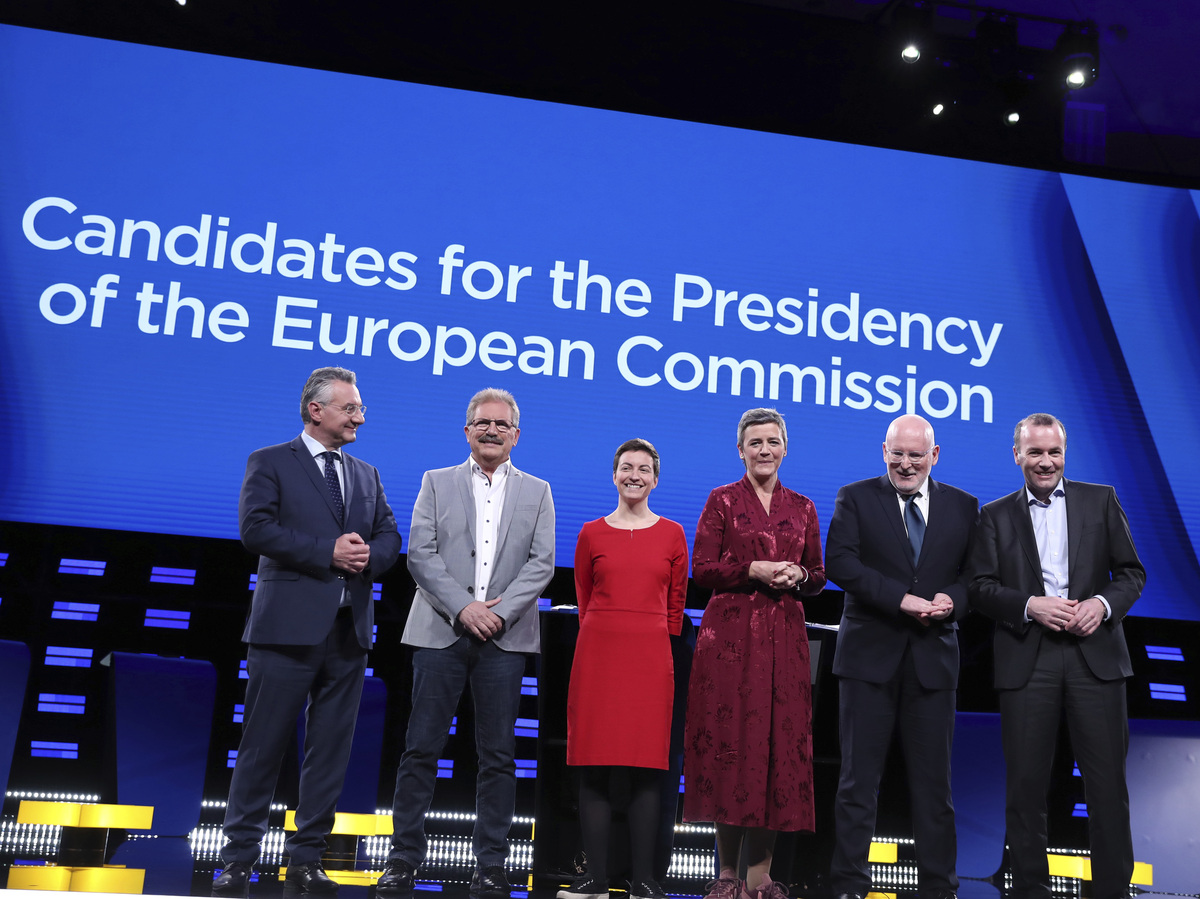 The Euroskeptics, on the other hand, complain that EU power is concentrated in the hands of unelected officials, bureaucrats who trample national sovereignty.

Timmermans said this vote could be the most consequential in decades.

"I believe this is the first time since the beginning of European integration that this European Union could actually break apart," he said. "This is no longer a nightmare or a bad dream. It is a potential reality."

Here's Why Brexit Wasn't Followed By Frexit, Swexit Or Nexit

Timmermans' nightmare scenario is not that other member states will follow Britain and vote to leave the EU. Negotiating Brexit has been so chaotic, leaving doesn't seem like such a good idea anymore. 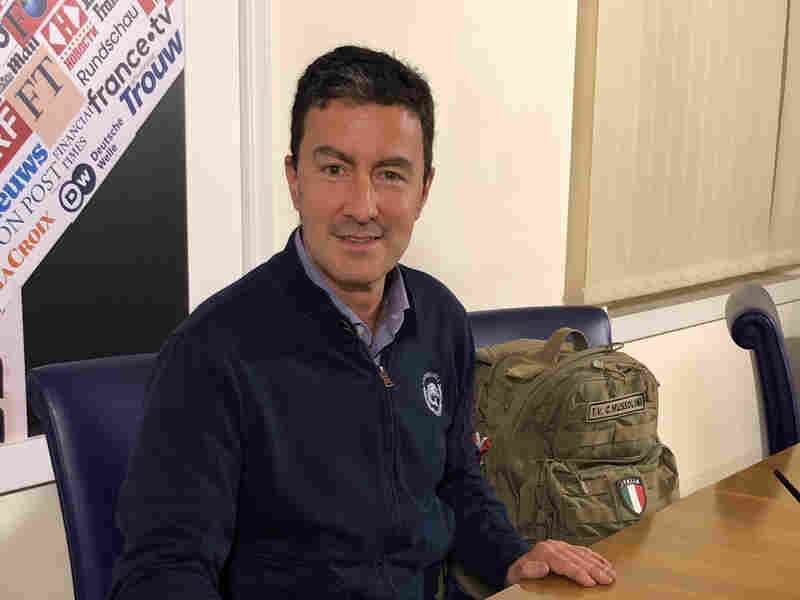 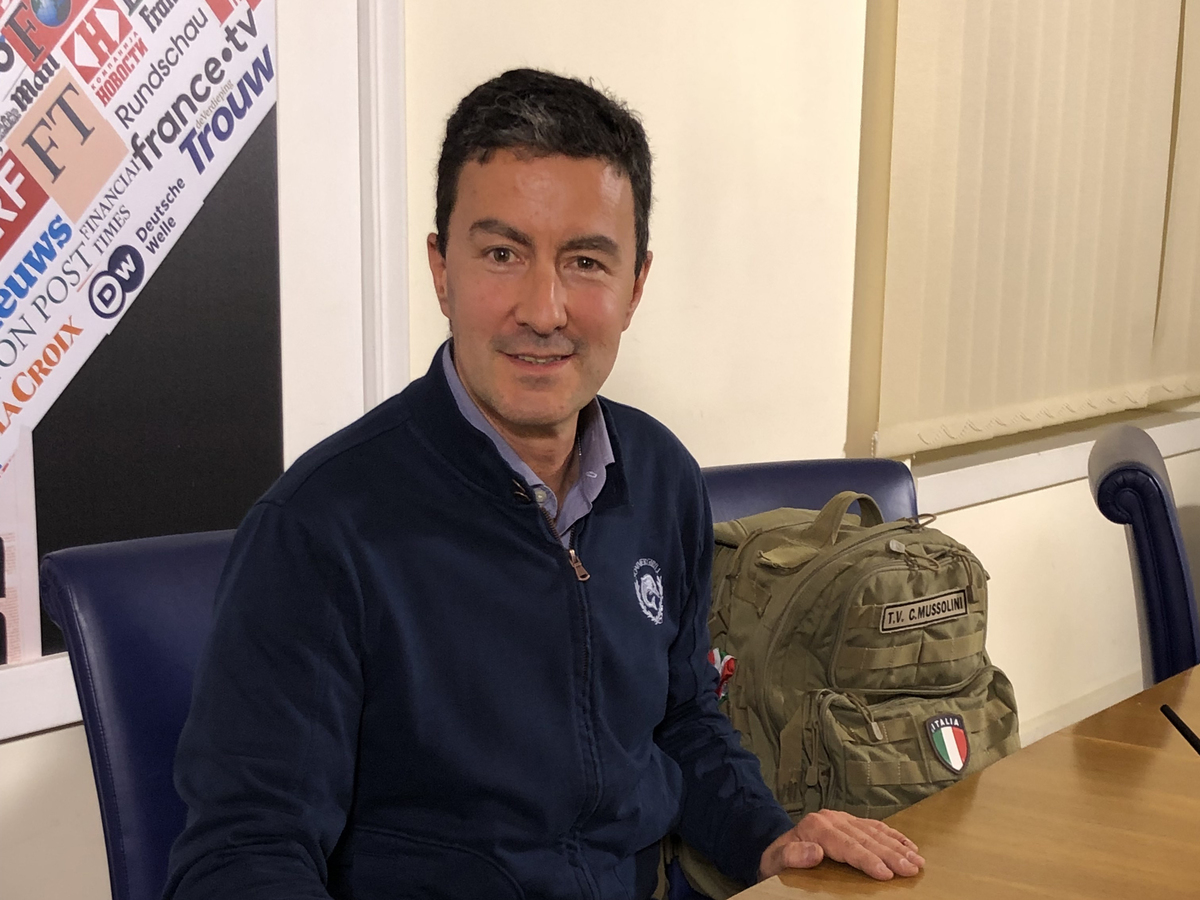 Italian politician Caio Giulio Cesare Mussolini, the great-grandson of dictator Benito Mussolini, is running for a seat in the European Parliament.

Instead, Europe's anti-immigrant nationalist parties, which argue that Brussels wields too much power, are campaigning hard to win seats in the European Parliament. From there, they will try to water down the EU's federal powers over individual nation-states. Or, as they would put it, they will try to reclaim sovereignty for their peoples.

"If these populist and sovereigntist movements are rising, [it] means that there is something wrong in this Europe and we would try to do our best to change this European Union from inside," one Italian nationalist party member recently told foreign media in Rome.

His name is Caio Giulio Cesare Mussolini, and his great-grandfather was the dictator Benito Mussolini. He is unapologetic about the legacy of fascism and is running for a seat in the European Parliament from the small, hard-right Brothers of Italy party.

The campaign to remake the EU from the inside has a big booster from across the Atlantic — Donald Trump's former chief strategist Steve Bannon. He has spent a lot of time in Europe this year, closely following the Parliament campaign.

Bannon has said a populist victory across Europe would end closer economic and political integration and restore the continent much to the way it was before the European Common Market, the EU's precursor, was founded more than six decades ago.

"And that is a Europe of nations," Bannon told reporters in Rome in March. "Discussions on immigration and some of these basic hot-button issues, the 30,000 pages of regulations that the EU has, I think are going to start to be cut in half. I think you'll start seeing deregulation and I think over time you are going to see more changes of power coming back to the individual nation-states."

A central platform plank for all is curbing immigration into Europe, especially from the Muslim world. To promote such policies, Bannon is setting up an "academy for Judeo-Christian values" at an old monastery outside Rome. When he visited Italy in March, he expressed confidence in the outcome he favors.

The EU already has one populist troublemaker inside its ranks: Orban, the president of what he has called Hungary's "illiberal state." His critics call it a semi-authoritarian state. In March, the European Parliament's center-right group, the European People's Party, suspended Orban's Fidesz party for its anti-migrant policies and restrictions on media and academic freedom.

But that will have little impact after this week's elections, analysts say, should Orban decide his party will join a new, populist group in the European Parliament.

At the Florence conference, Hungarian sociologist Balint Magyar stressed to NPR that current EU rules already enable one member to obstruct the deliberations. Thanks to the European Union's unanimous decision-making requirement, he says, any member state — whatever its political and economic weight — can veto proposals, essentially holding the rest of the EU hostage.

"Orban, representing Hungary, which provides 0.9 percent of the GDP of the EU, wants to determine what [all the others] should do," Magyar warns.

Polls project that after this week's elections, populists will see strong gains in the European Parliament -- not enough to control it, but sufficient to weaken the legislative influence of the pro-EU center-right and center-left parties.