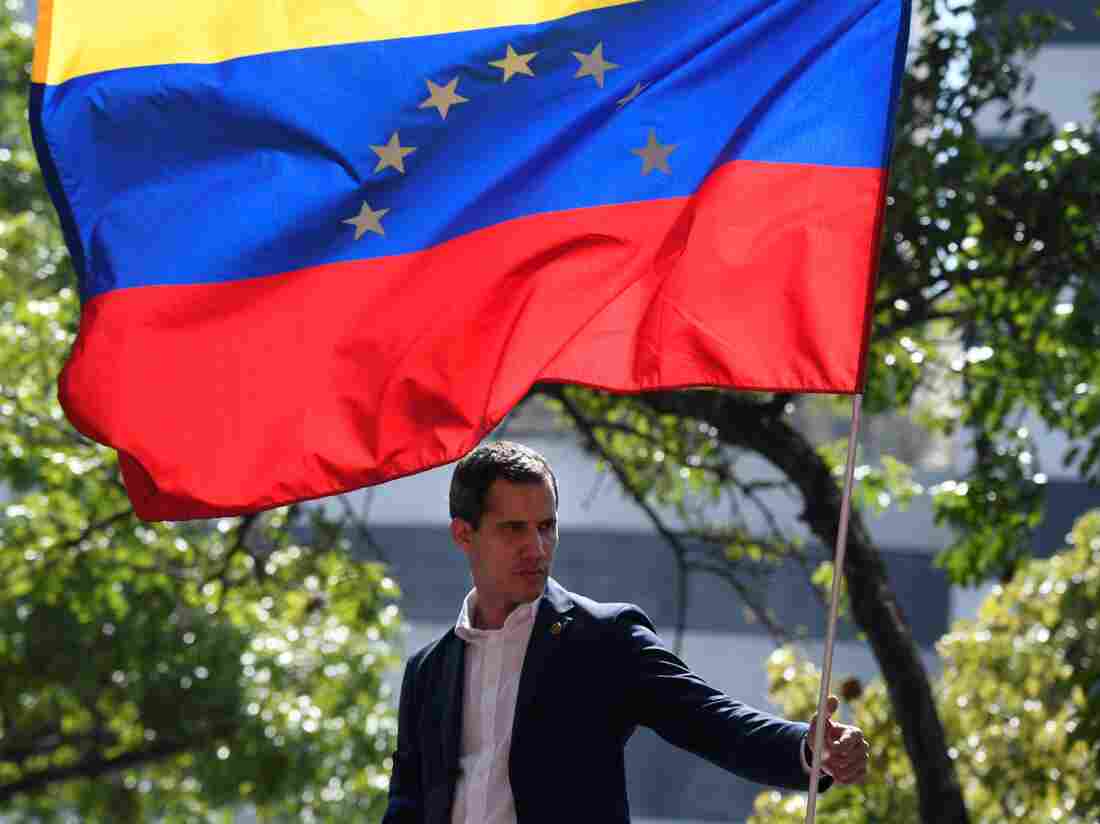 Venezuelan opposition leader Juan Guaidó is pictured under a national flag during a gathering with supporters on April 30, 2019. Delegates for both Guaidó and Nicolás Maduro are slated to hold direct talks in Norway this week aimed at ending the crisis in Venezuela. Federico Parra /AFP/Getty Images hide caption 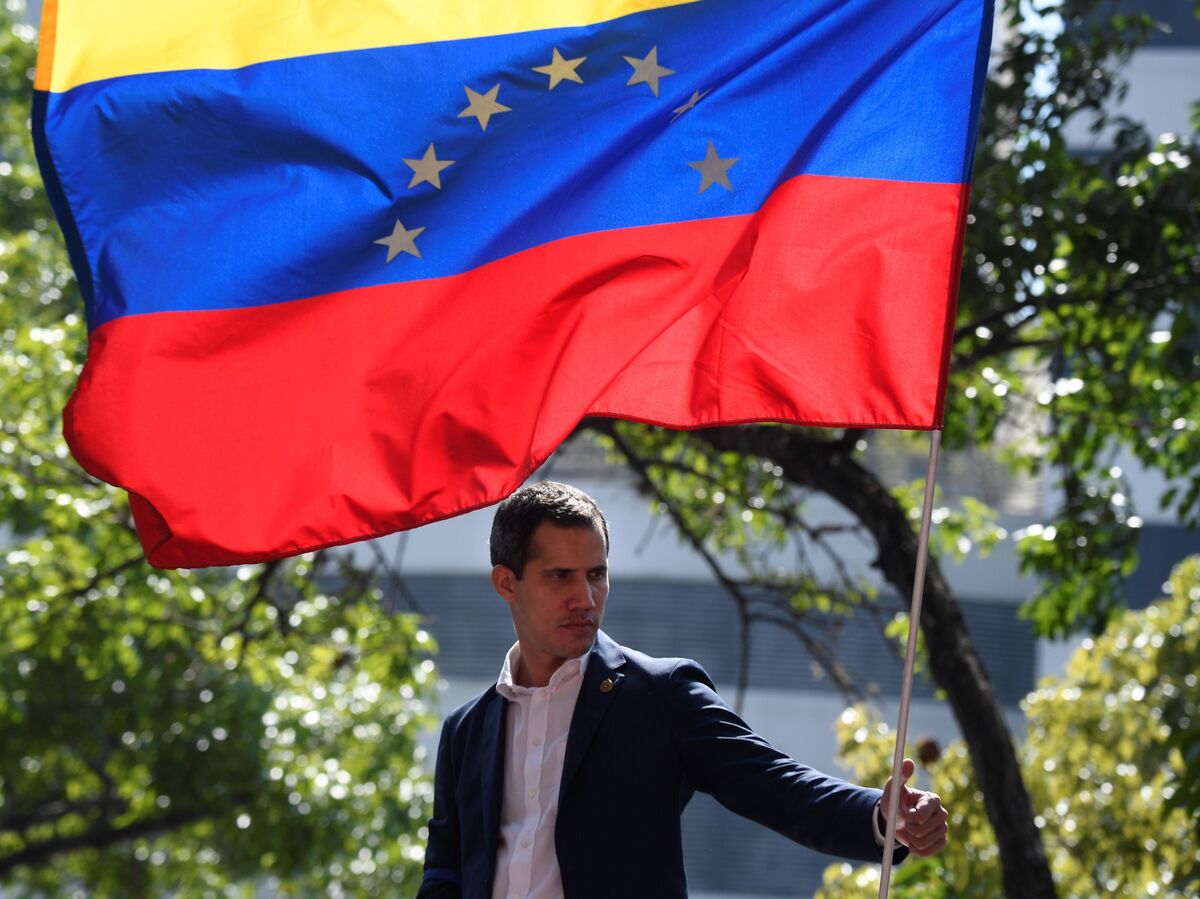 Venezuelan opposition leader Juan Guaidó is pictured under a national flag during a gathering with supporters on April 30, 2019. Delegates for both Guaidó and Nicolás Maduro are slated to hold direct talks in Norway this week aimed at ending the crisis in Venezuela.

The push for a negotiated solution to the Veneuzelan crisis appears to be picking up steam with delegates for President Nicolás Maduro and opposition leader Juan Guaidó slated for direct talks in Norway this week.

The Norwegian government, which is serving as mediator, made the announcement two weeks after an initial round of meetings involving the two sides in Oslo. The effort is designed to break months of political gridlock at a time when Venezuela is suffering from its worst economic meltdown in history, a disaster that has prompted more than 3 million people to flee the country.

"Norway commends the parties for their efforts and appreciates their disposition" to negotiate, Norwegian Foreign Minister Ine Eriksen Soreide said on Saturday.

Even so, the opposition remains skeptical. It claims Maduro has used past negotiations, including meetings in the Dominican Republic two years ago, to stall for time while refusing to make concessions.

"They will never fool us again with a false dialogue like in 2017," Guaidó told supporters on Saturday. "That's why today we're in the streets."

Guaidó, who is recognized by the United States and more than 50 other countries as Venezuela's rightful head of state, has instead tried to force out Maduro, who was reelected last year in balloting marred by allegations of widespread fraud. But massive street protests and calls for the Venezuelan military to withdraw their support for Maduro have failed.

"If you can't kick him out, at some point you are going to have to realize that you must negotiate," said Caracas pollster and political analyst Luis Vicente León.

He added that the two sides have likely been speaking in secret for months in order to set up the talks in Norway, which also helped broker Colombia's historic 2016 peace treaty that ended a long guerrilla war.

Several factors could prompt Maduro to cut a deal. These include U.S. sanctions on the nation's vital oil industry, which provides more than 90% of Venezuela's export income, said Geoff Ramsey of the Washington Office on Latin America, a policy and human rights group.

"The pressure isn't letting up," he said. "Maduro and his entire inner circle have every interest to advance some kind of negotiated transition because that's the only way to get out from under pressure of U.S. sanctions."

In addition, Maduro may fear a military coup as salaries and living conditions for officers deteriorate. Ramsey thinks they "would be very happy to throw [Maduro] under the bus and replace him with someone who has much more international legitimacy."

Opinion: Venezuela's Guaidó Is On A Long-Haul Mission. Are His U.S. Backers?

On Saturday, a smiling Maduro appeared on national television to announce that he would send a delegation to Norway to "move forward towards good agreements."

The opposition insists that negotiations must focus on Maduro either stepping down or holding a free and fair presidential election. So does the U.S. On Saturday, State Department spokeswoman Morgan Ortagus said: "We believe the only thing to negotiate with Nicolás Maduro is the conditions of his departure."

The two sides appear far apart. During initial talks earlier this month, representatives for Maduro and the opposition spoke separately with a Norwegian mediator rather than to each other.

Opposition supporters fear that Maduro is simply trying to distract attention from the country's growing havoc, which includes hyperinflation, widespread power outages and shortages of food, medicine and gasoline.

In Maracaibo, one of the hardest hit cities located near the Colombian border, vegetable salesman and Guaidó supporter Ángel Gallardo claimed that only a foreign-led invasion would dislodge Maduro from power. "Negotiations won't solve anything," he said.

But with life getting tougher by the day, high school principal Alexander Pérez said he's desperate for a breakthrough in Oslo. Thanks to hyperinflation, Pérez said that until recently, he was spending more per day on bus fare than he earned on the job. He now walks to work.

"Negotiations are the best solution," Pérez said. "That way we will avoid bloodshed and even more pain than we are already suffering."