Accessibility links
Johnson & Johnson Opioid Trial To Begin In Oklahoma, Could Set Precedent Oklahoma's trial is the first in a wave of litigation attempting to bring claims against opioid manufacturers. The state is seeking millions of dollars in damages and penalties. 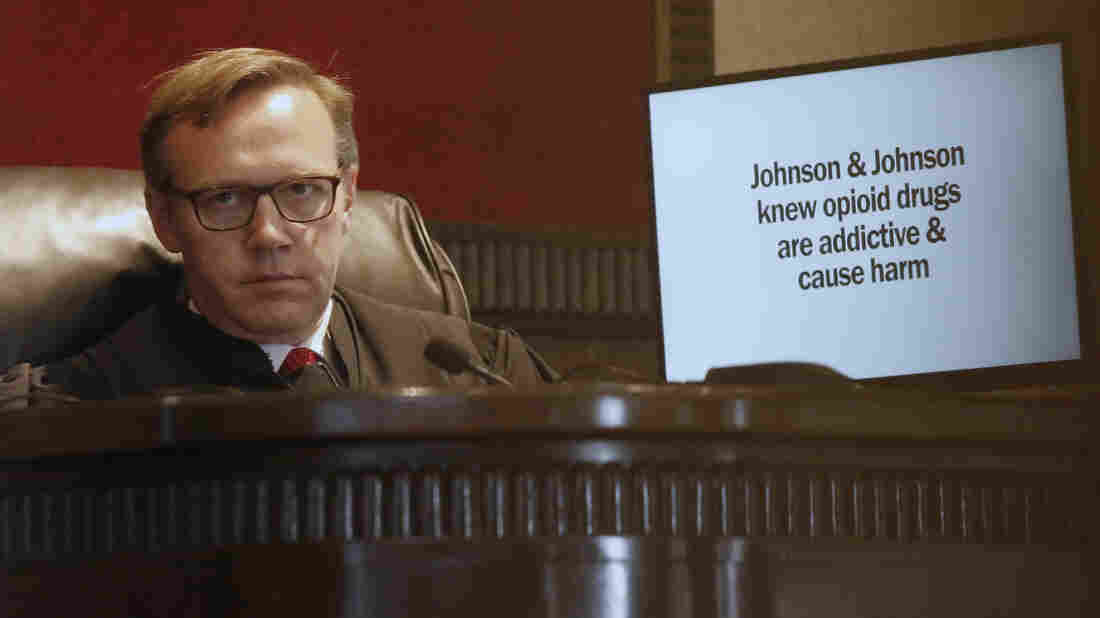 Judge Thad Balkman listens during opening arguments for the state of Oklahoma on Tuesday in Norman, Okla. It is the nation's first state trial against drugmakers blamed for contributing to the opioid crisis begins in Oklahoma. At right is a slide from the state's presentation shown on a monitor. Sue Ogrocki/AP hide caption 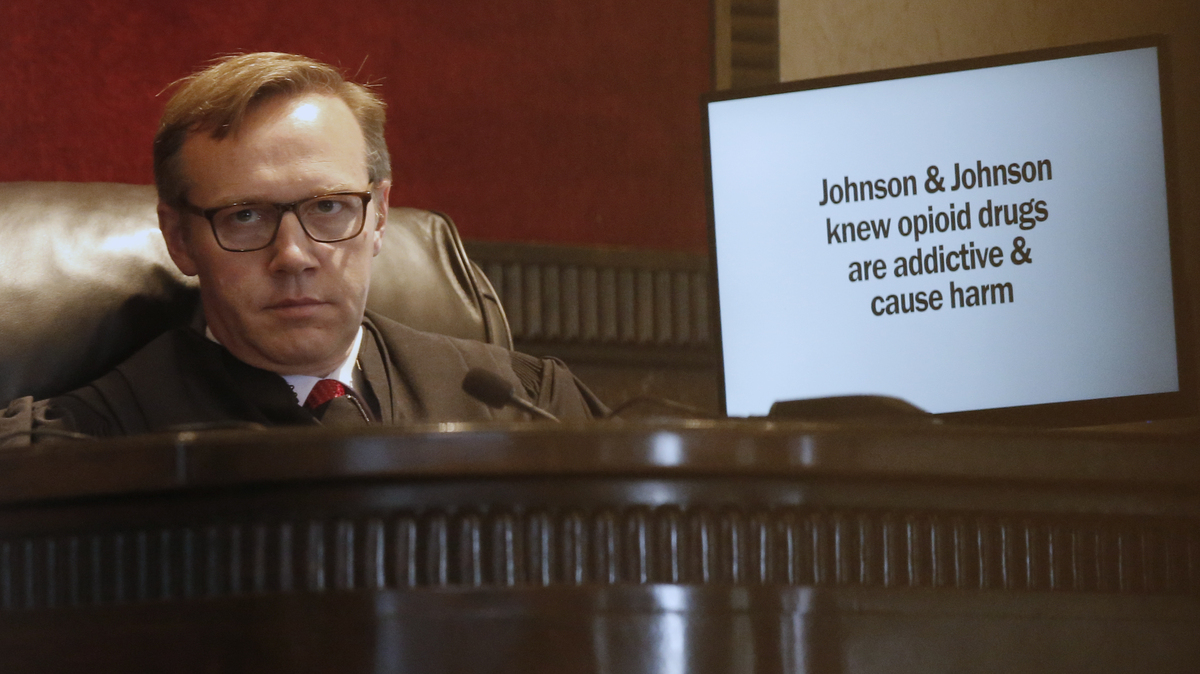 Judge Thad Balkman listens during opening arguments for the state of Oklahoma on Tuesday in Norman, Okla. It is the nation's first state trial against drugmakers blamed for contributing to the opioid crisis begins in Oklahoma. At right is a slide from the state's presentation shown on a monitor.

The first case in a flood of litigation against opioid drug manufacturers opened on Tuesday in Oklahoma.

Johnson & Johnson is the sole defendant in the case after two other companies — Teva Pharmaceuticals and Purdue Pharma — both settled with the state before the trial began.

In opening statements, Hunter said the flood of opioid medications was the "worst manmade public health crisis in the history of our state and country." He said evidence would show that over 4,000 Oklahomans had died of overdoses from prescription opioids between 2007 and 2017. 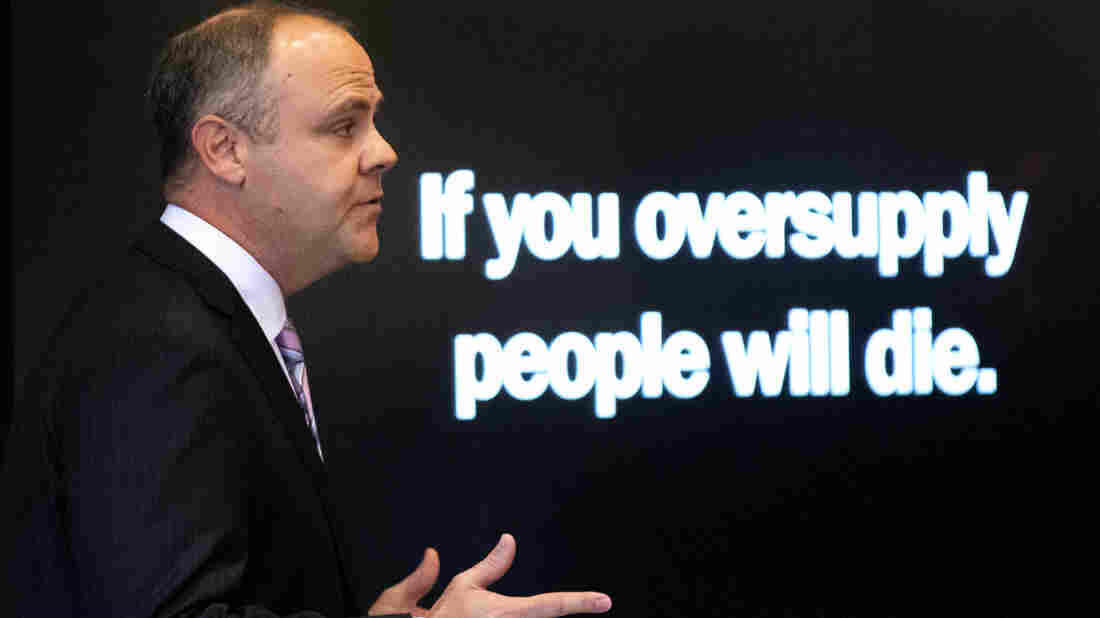 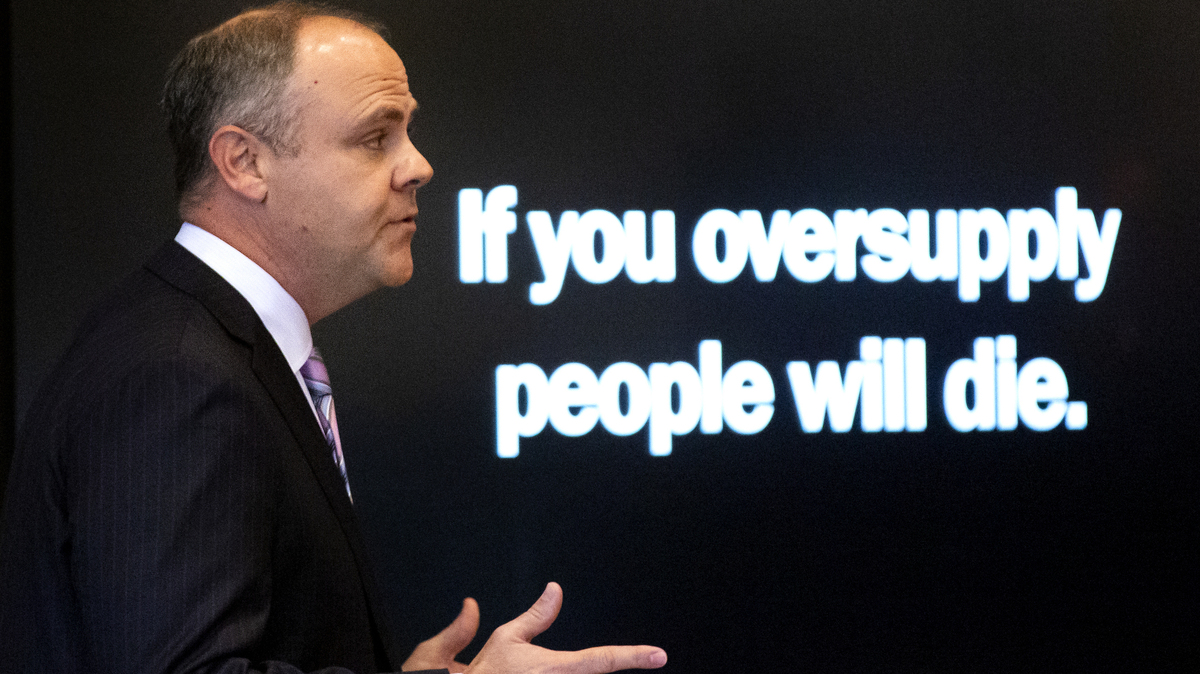 State's attorney Brad Beckworth speaks during the opening statements during the opioid trial in Norman, Okla., Tuesday. The proceeding are the first public trial to emerge from roughly 2,000 U.S. lawsuits aimed at holding drug companies accountable for the nation's opioid crisis.

Johnson & Johnson should be responsible for cleaning up the mess, the state claimed.

Lawyers for the company argued in their opening statements that, far from creating a "public nuisance," as Oklahoma is arguing, their medication was critical for treating chronic pain.

"Janssen's conduct was not a nuisance," said Larry Ottaway, representing Johnson & Johnson and its subsidiary Janssen Pharmaceuticals. "They provided medically necessary mediations ... They were lawfully subscribed by doctors in the state of Oklahoma."

The bench trial — with a judge and no jury — is the first of its kind to play out in court.

Nora Freeman Engstrom, a professor at Stanford Law school, said lawyers in the other cases and the general public are eager to see what proof Hunter's office offers the court.

Most states and more than 1,600 local and tribal governments are suing drugmakers and distributors. They are trying to recoup billions of dollars spent on addressing the fallout tied to opioid addiction.

Initially, Hunter's lawsuit included Purdue Pharma, the maker of OxyContin. In March, Purdue Pharma settled with the state for $270 million. Soon after, Hunter dropped all but one of the civil claims, including fraud, against the remaining defendants.

Just two days before the trial, another defendant, Teva Pharmaceuticals of Jerusalem, announced an $85 million settlement with the state. The money will be used for litigation costs and an undisclosed amount will be allocated "to abate the opioid crisis in Oklahoma," according to a press release from Hunter's office.

In its own statement, Teva said the settlement does not establish any wrongdoing on the part of the company, adding Teva, "has not contributed to the abuse of opioids in Oklahoma in any way."

The companies involved in this and other lawsuits against opioid manufacturers have a broad concern about what their liability might be, says University of Kentucky law professor Richard Ausness.

"This case will set a precedent," he says. "If Oklahoma loses — of course they'll appeal if they lose — but the defendants may have to reconsider their strategy."

With hundreds of similar cases pending — especially a mammoth case pending in Ohio — the state's strategy will be closely watched.

"And of course lurking in the background is the multi-state litigation in Cleveland, where there will ultimately be a settlement in all likelihood, but the size of the settlement and the terms of the settlement may be influenced by Oklahoma," says Ausness.

'There's nothing wrong with producing opioids'

But the legal case is complicated. Unlike tobacco, where states won a landmark settlement, Ausness points out that opioids serve a medical purpose.

"There's nothing wrong with producing opioids. It's regulated and approved by the Federal Drug Administration, the sale is overseen by the Drug Enforcement Administration, so there's a great deal of regulation in the production and distribution and sale of opioid products," Ausness explains. "They are useful products so this is not a situation where the product is defective in some way."

There's nothing wrong with producing opioids. ... They are useful products so this is not a situation where the product is defective in some way.

It's an argument that has found some traction in court. Recently, a North Dakota judge dismissed all of that state's claims against Purdue, a big court win for the company. In a written ruling that the state says it will appeal, Judge James Hill questioned the idea of blaming a company that makes a legal product for opioid-related deaths.

Now the Oklahoma case rests entirely on a claim of public nuisance, which refers to actions that harm members of the public, including injury to public health.

"It's sexy," Ausness says. "You know 'public nuisance' makes it sound like the defendants are really bad."

If the state's claim prevails, Big Pharma could have to spend billions of dollars in Oklahoma helping ease the epidemic. "It doesn't diminish the amount of damages we believe we'll be able to justify to the judge," Hunter says, estimating a final payout could run into the "billions of dollars."

Hunter's decision to go it alone and not join with a larger consolidated case could mean a quicker resolution for the state, or no money all, Ausness says.

"Particularly when we're talking about [attorneys general], who are politicians, who want to be able to tell the people, 'Gee, this is what I've done for you.' They are not interested in waiting two or three years [for a settlement], they want it now," he says. "Of course the risk of that is you may lose." 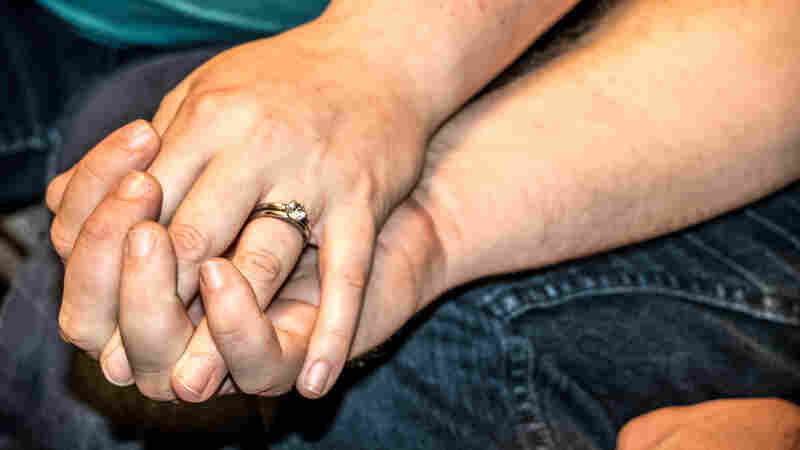 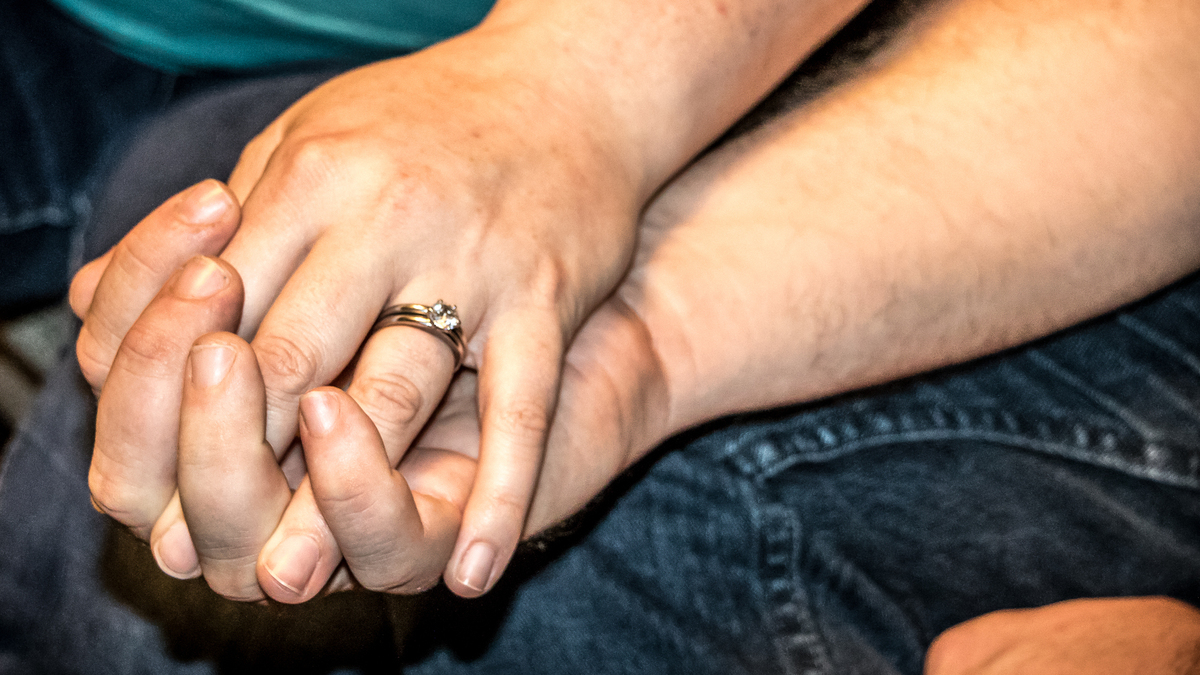 Greg and Judy hold hands at their home in Guthrie, Okla. The couple can't find integrated mental health and opioid addiction treatment for Greg in their area.

Oklahoma has the second highest uninsured rate in the nation and little money for public health. The state is trying to win money from the drug companies to pay for treatment for people like Greg, who uses drugs and is afraid he'll lose his job if we use his last name.

Greg and his wife Judy say they haven't been able to find the integrated treatment that Greg needs for both his opioid addiction and his bipolar disorder. It's either one or the other.

"They don't give you ... a treatment plan for both," Judy says. "They just say, 'Here, you can talk to this person.' They don't recognize that it's like self-medicating."

The couple live in Guthrie, Okla., about an hour north of the courthouse where the opioid trial will take place. Greg says he's been addicted to opioids for 11 years. People with prescriptions sell him their pills — sometimes Greg binges and takes 400 milligrams of morphine at once, a huge dose.

Of the $270 million Purdue settlement, $200 million is earmarked for an addiction research and treatment center in Tulsa, though no details have been released. An undisclosed amount of the $85 million Teva settlement will also go to abating the crisis.

Judy hopes that the treatment center may eventually help Greg.

"I wish he would stop using [opioids], but I love him. I'll always be here," she said.

This story is part of NPR's reporting partnership with StateImpact Oklahoma and Kaiser Health News.