Accessibility links
Living In 'Songland': The Reality Behind NBC's New Reality Show A new competition show from the producers of The Voice will search for a hitmaker — but what's it actually like to be a professional songwriter? 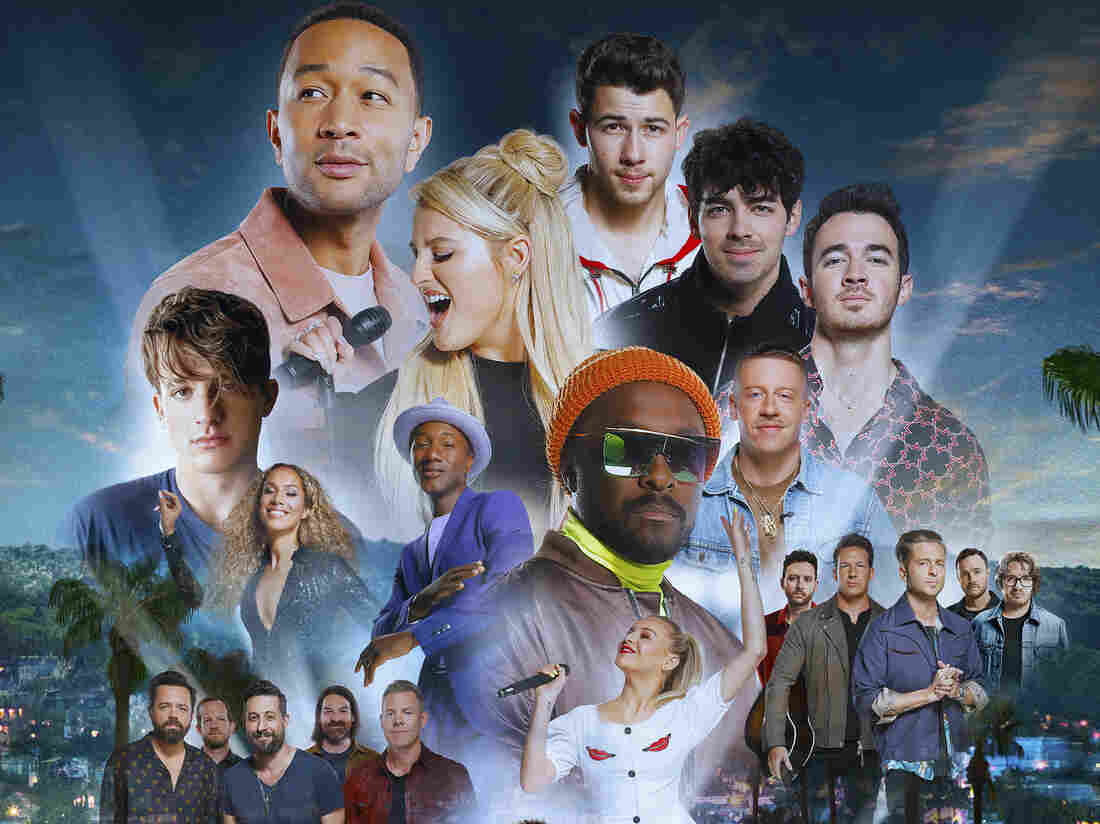 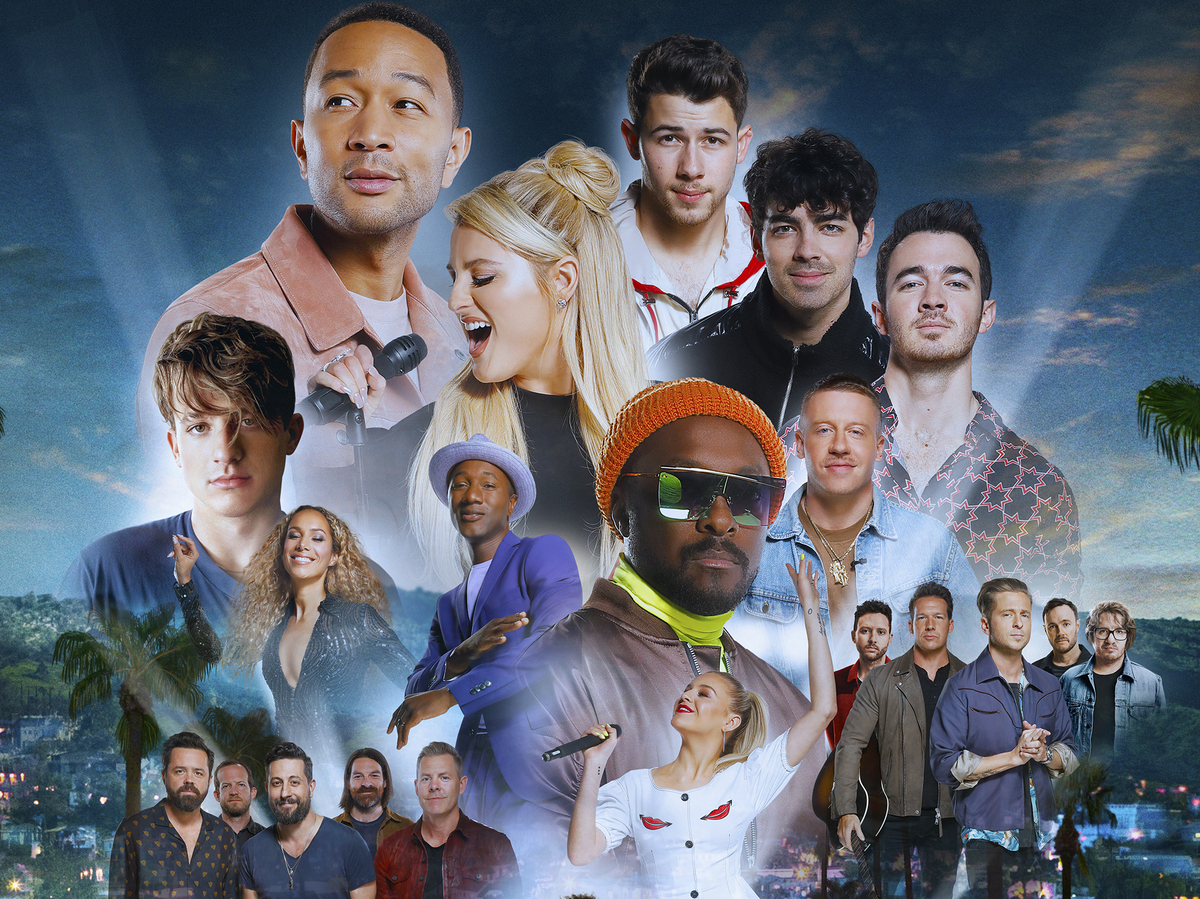 "My parents have no idea what I do," says Shane McAnally, calling from the airport in Los Angeles as he shuffles between his many duties: as a Grammy-winning songwriter, producer and now co-host of NBC's Songland, a new musical competition show from the producers of The Voice that judges songs, not those who sing them. McAnally's mom and dad aren't alone in being a bit confused. The job of a songwriter is likely one of the most important and the least understood in the entire craft of music – and, these days, one of the most proportionately underpaid. All that said, probably not an immediate homerun for compelling TV.

But that's exactly why McAnally, who has written with the likes of Kacey Musgraves and Sam Hunt, signed on to Songland four years ago, without seeing much more than a preliminary concept. Though he's based in Nashville, a town that recognizes the songwriter more than perhaps anywhere on earth, McAnally still was mystified by how low on the totem pole of appreciation they actually are. And in today's climate, where songwriters are now positioned as anonymous faces in the fight for fair compensation against some of the world's most powerful media corporations – Spotify, Google and Amazon, to name a few – McAnally thought that could simply no longer stand.

McAnally, Ryan Tedder (lead singer of OneRepublic and Grammy-winning producer for Beyoncé, Adele and Taylor Swift) and Ester Dean (a Grammy-nominated songwriter and producer for Rihanna and Nicki Minaj) comprise the judging panel on Songland, premiering tonight at 10 p.m. ET. The concept is pretty simple: a songwriter pitches a piece of work they've created to the panel along with a guest artist, from the Jonas Brothers to Meghan Trainor to Kelsea Ballerini, who will then cut and release that song after it's massaged in a workshop setting. On this evening's premiere, piano man John Legend is on deck.

Not long into tonight's premiere, Tedder will pose a question to Tebby Burrows, one of the contestants. She's a Bahamian-born songwriter who lives in Miami, and is offering up a message-driven tune called "We Need Love" that she hopes Legend will choose. It's a big step up from the usual process of just shuffling a demo tape around – but, again, that's not exactly thrilling television.

"Do you make money as a songwriter?" Tedder asks her.

The answer, like many in her position, is no. Burrows describes herself as "a little bit like Clark Kent," working a marketing job during the day and gigging at night more for passion than profit. She's likely not alone. It's not easy to make a comfortable, or even passable, living as a songwriter. A first deal at an independent publisher, if a writer is lucky enough to snag one, barely equates to minimum wage, leaving "successful" songwriters to find a second revenue stream. Therein lies the rub. "To be successful, it pretty much has to take 100% of your attention," says Abe Stoklasa, a songwriter (Chris Lane's "Fix," Charles Kelly's "The Driver") who says his first publishing deal was worth $15,000 a year. And that's with no health insurance, either, which isn't customarily offered to songwriters through their publisher or performance rights organization ("PRO") such as ASCAP or BMI.

Tedder agrees. Though his finances are no longer a worry, he admits on the premiere of Songland that he used to work at Pottery Barn, back when he couldn't afford furniture himself. He hopes that Songland helps songwriters in both direct and indirect ways: that the contestants, even if they don't win their respective episode, can use the visibility to score publishing deals or syncs (where a song is used for film or television), and that the public at large – and even some in the industry — might start to value songwriters as more than just a name on the back of a CD. But even if they do snag a publishing deal, is the path lucrative if their songs don't hit "Old Town Road" or "High Hopes" proportions?

"If a guy working in the mailroom of Sony comes across the next Beyoncé, he gets more notoriety for discovering that artist than the songwriter that writes the song that becomes that artist's hit," says Tedder. "Not only are we on the bottom of the food chain, the way the payment structure is set up, we get paid the least. And with streaming, that income has dropped drastically."

Indeed, things have gotten a lot more difficult for songwriters of late. It takes a massive hit for a songwriter to substantially profit from streaming services. And in the past two years, songwriters have been engaging in a score of battles, from lobbying to see the songwriter-focused Music Modernization Act signed into law – which it was, unanimously, last year — to fighting Spotify, Google, Amazon and SiriusXM/Pandora as they attempt to appeal a 2018 ruling that would substantially increase songwriter and publisher revenue. Both have been a struggle, in part because songwriters aren't generally celebrities, and it's a lot easier to garner support for a cause when there's a recognizable face at the helm.

Songwriting used to be a much more lucrative profession before the streaming era, and not just because of royalties. In a singles-centric landscape that is responding to rapidly declining album sales, that means fewer chances for a songwriter to even land a cut to begin with, let alone a radio hit. And with more and more writers collaborating on a track – a Kanye West song can have fifteen – that means a proportionally smaller share of any royalties. "Back in the day, you could make millions from album cuts, and then just retire to the Bahamas," says Tedder. "You could have the fourth or fifth single on a Maroon 5 record. These days, if you don't have the next single, with a release date in writing, you have nothing. All that to say, it's not an easy time to be a songwriter."

Dave Stewart of the Eurythmics is one such writer happily (and literally) living in the Bahamas – though retired he is not. Stewart conceived Songland with Emmy Award-winning producer Audrey Morrissey (The Voice) and director Ivan Dudynsky, with Maroon 5's Adam Levine as an executive producer. Stewart came up with the seeds of the idea on a trip to Nashville. "Nashville always stuck to this songwriting thing, and I just thought there should be a show to explore that," he says. "It's not looking behind the curtains. It's like looking behind many curtains."

Stewart's right – the songwriting world is indeed shrouded in mystery. Truth is, the life of a songwriter is much more regimented than one might imagine, publishing deal or no. "Most write every day at 11 a.m.," says Stoklasa. "Some do two times a day. When I am super motivated, I am writing five days a week." All the while, for many, running a second shift to help pay the bills. "I worked at night at a nursing home, and then I would go to the studio," says Dean. 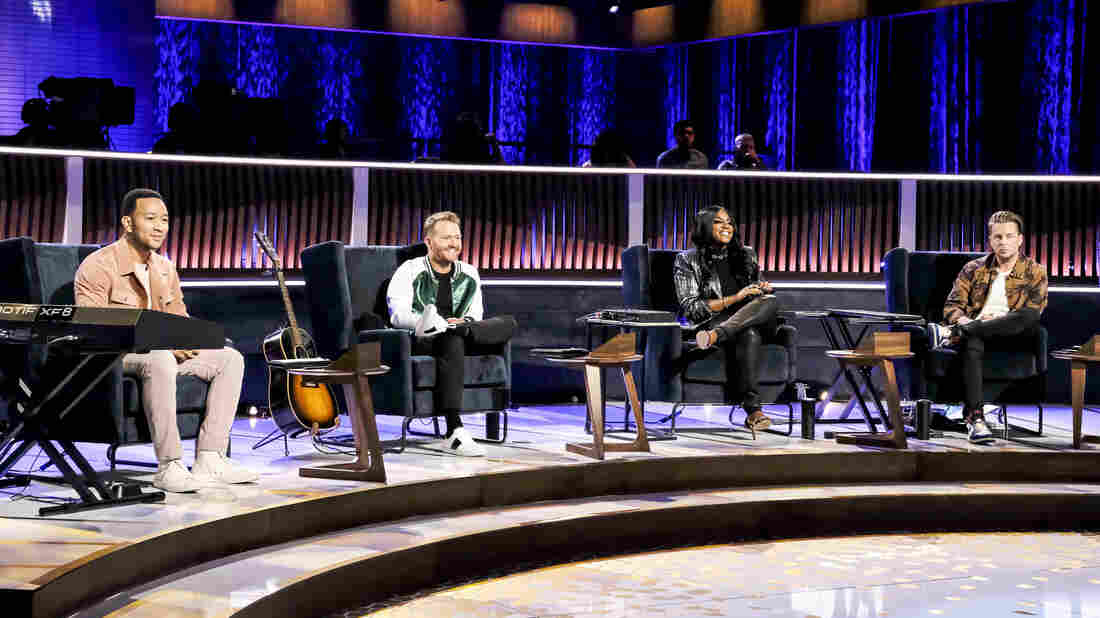 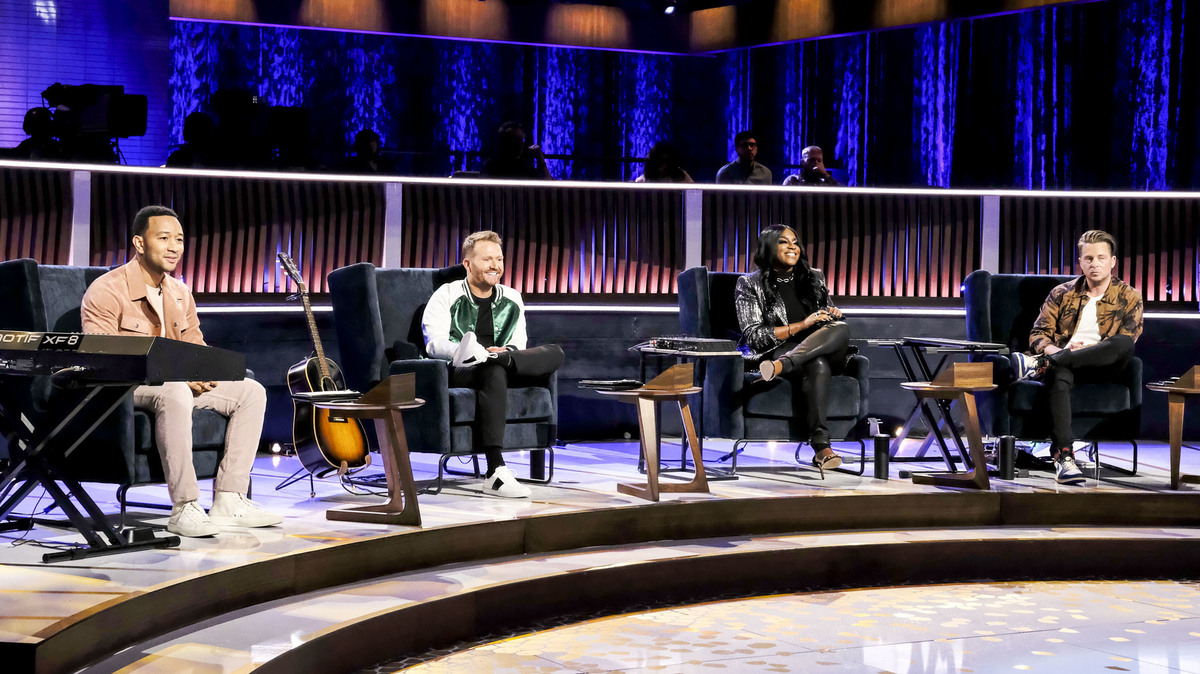 From left: John Legend, Shane McAnally, Ester Dean and Ryan Tedder, in a still from the premiere season of Songland.

The technicalities of a songwriter's life don't quite make their way onto Songland, but there is some jargon: Tedder, working with a contestant, talks about the number of beats, and terms like tempo and pre-chorus work their way into the criticism. Tedder wasn't worried that this type of language might scare people off — after all, plenty have learned what a sous-vide is from watching Iron Chef. "We know what kind of knife Jiro [Ono] uses to make his sushi, but we don't know Bernie Taupin wrote the lyrics for Elton John," says Tedder.

On Iron Chef and the like, however, the goal is to be as creative as possible, to wow the panel with an inspired use of mushroom here, a savvy twist on ice cream there. On most musical competition shows... perhaps not so much. Original material has long been taboo on programs like American Idol – it occasionally pops in during the audition phase, but it's generally frowned upon in favor of sport-singing successful hits.

Catie Offerman, a Nashville-based singer-songwriter, remembers trying out for American Idol when she was just 15. For the audition, she performed a song she wrote herself.

"When I finished, the judge looked at me said, 'don't ever come back and f****** sing an original song again,'" she says. "Honestly, that put everything into perspective for me." Offerman is not on Songland, but she has run the gamut when it comes to reality programming, making it to Hollywood on Idol years from that first audition but dropping out before she could get any further.

"Talent goes way beyond how many notes someone can sing," she says. "When I watch Idol, it doesn't speak to me. I would rather turn on a show and see someone who can't sing but has something to say. And having something to say is way more important than hitting a bunch of octaves."

Without that vocal showboating, does Songland actually have anything to stand on? Turns out, the process itself is pretty entertaining – but that owes a lot to the panel themselves, and not just the songwriters. It's impressive to see Legend take a song and instantly shift the mood with a slower melody, or to see McAnally, Dean and Tedder make small but insightful snap suggestions that transform a nice tune into a possible hit. Like with most musical competition shows, the judges are the real stars, which falls pretty closely in line with how being a songwriter usually goes: hand the material over, watch it shine in the hands of another and then sit back and wait for your (inconsequential, in the case of streaming) royalties.

"You can be fifth place on the Voice and still be more famous than the most famous songwriter," says Tedder. "It's time for songwriters to have a voice. We will be a lot harder to ignore once we do."