'Tornado Outbreak' Devastates Ohio Communities With Winds Up To 140 MPH

'Tornado Outbreak' Devastates Ohio Communities With Winds Up To 140 MPH 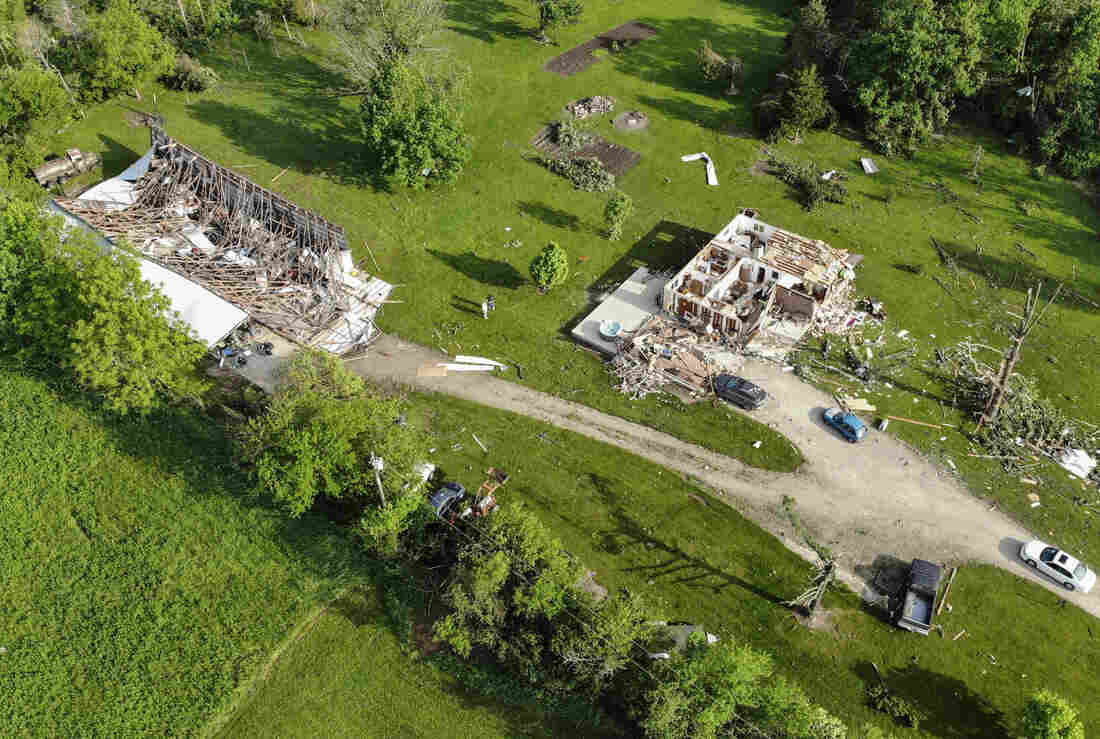 Storm-damaged homes after a tornado passed through the area the previous evening in Brookville, Ohio. John Minchillo/AP hide caption 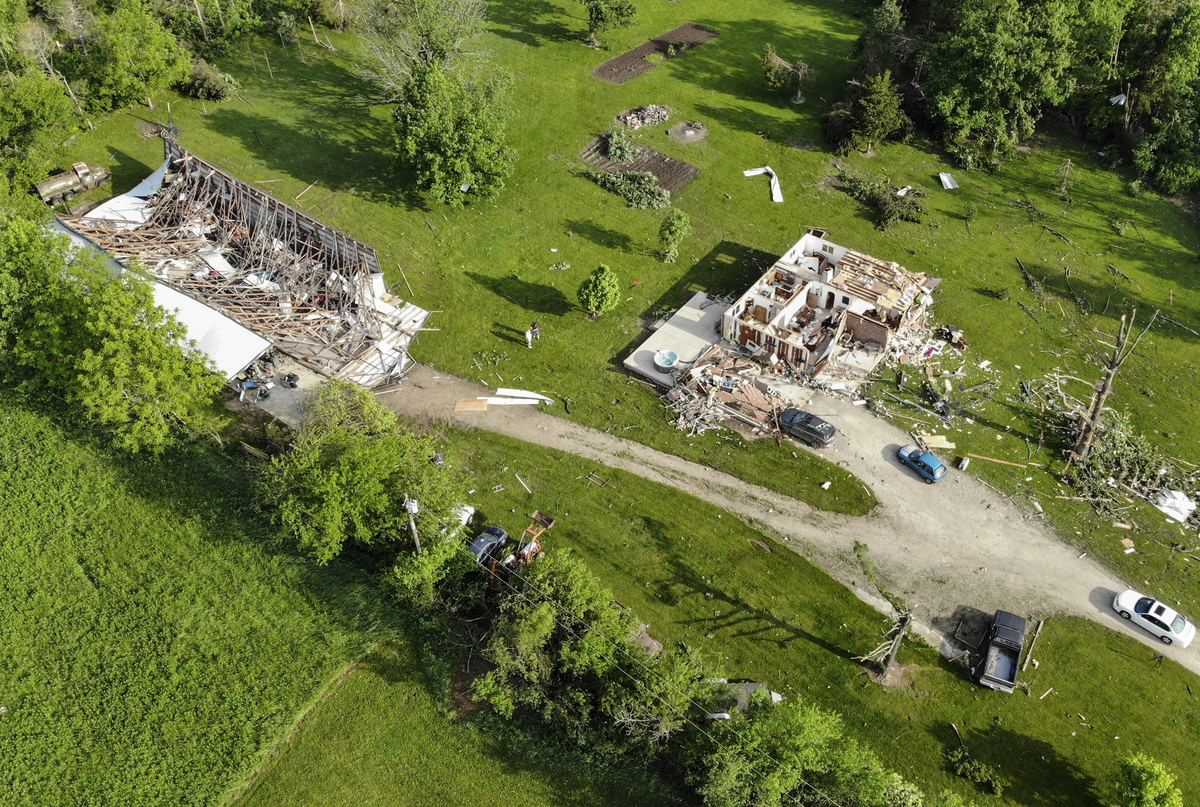 Storm-damaged homes after a tornado passed through the area the previous evening in Brookville, Ohio.

The National Weather Service says that "at least an EF3 tornado with winds up to 140 mph" struck the city of Beavercreek in Greene County, Ohio. It says similar winds hit Trotwood in Montgomery County — and that it's too early to know whether the same tornado passed through those counties. On the tornado strength scale, an EF3 is designated as "severe."

As it announced those designations, the NWS office in Wilmington said it's still analyzing the storm's effects in other areas.

The lone reported death occurred in Celina in Mercer County, where Melvin Dale Hanna, 81, was killed during the storm "as the direct result of a vehicle entering his house," Celina Mayor Jeffrey Hazel announced Tuesday.

"Frankly, back in the neighborhood, there's areas that looked really like a war zone," Hazel said after visiting one devastated area. "So it's a tough one in there."

Ohio Gov. Mike DeWine toured the damage Tuesday, calling the damage "devastating" on Twitter and adding that dozens of homes have been destroyed.

The damage here in #Celina is devastating. The mayor tells me there are several serious injuries and a fatality. Dozens of homes destroyed here. Our prayers are with everyone impacted. pic.twitter.com/p6bvryvPHn

Given the terrible destruction and havoc that the storm system unleashed, officials in Dayton said they felt fortunate no deaths were reported there.

"Last night about 11:30, tornadoes struck the Dayton area," Dayton Fire Chief Jeffrey Payne said. "However, we have yet to find one fatality, and we have had three minor injuries. I find that pretty miraculous."

Officials in Dayton, Celina and nearby communities are still searching for potential victims after intense storms wreaked havoc. Suspected tornadoes also left behind destruction in the Indiana town of Pendleton, about 100 miles west of Dayton.

Dayton is currently under a boil-water advisory. 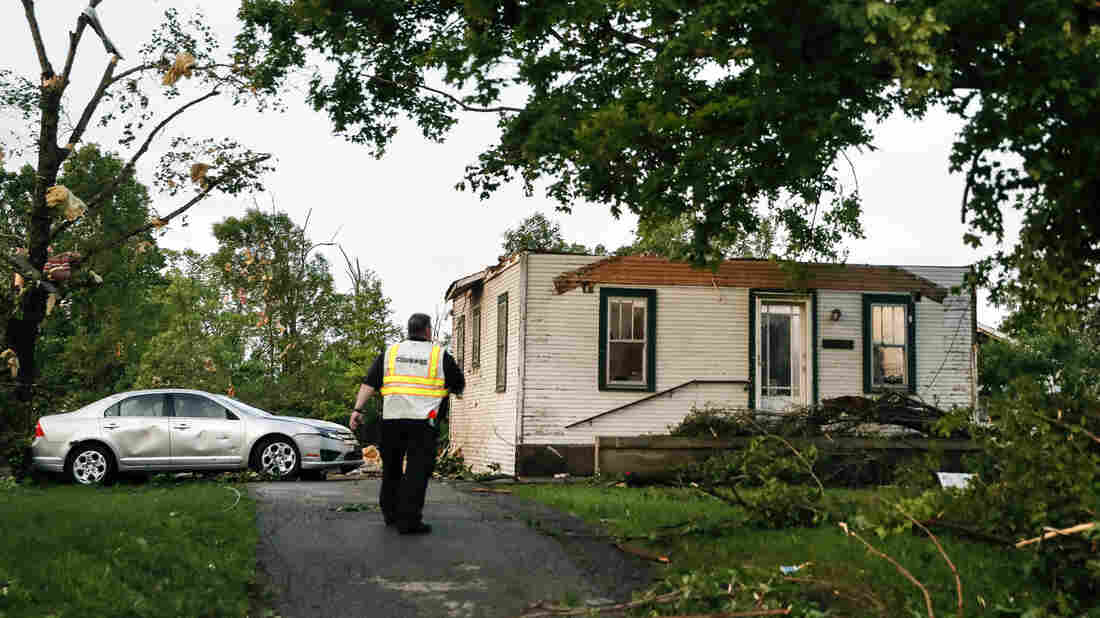 Storm damage litters a residential neighborhood, in Dayton, Ohio, Tuesday, after a rapid-fire line of apparent tornadoes tore across Indiana and Ohio overnight. The storms were packed so closely together that one crossed the path carved by another. John Minchillo/AP hide caption 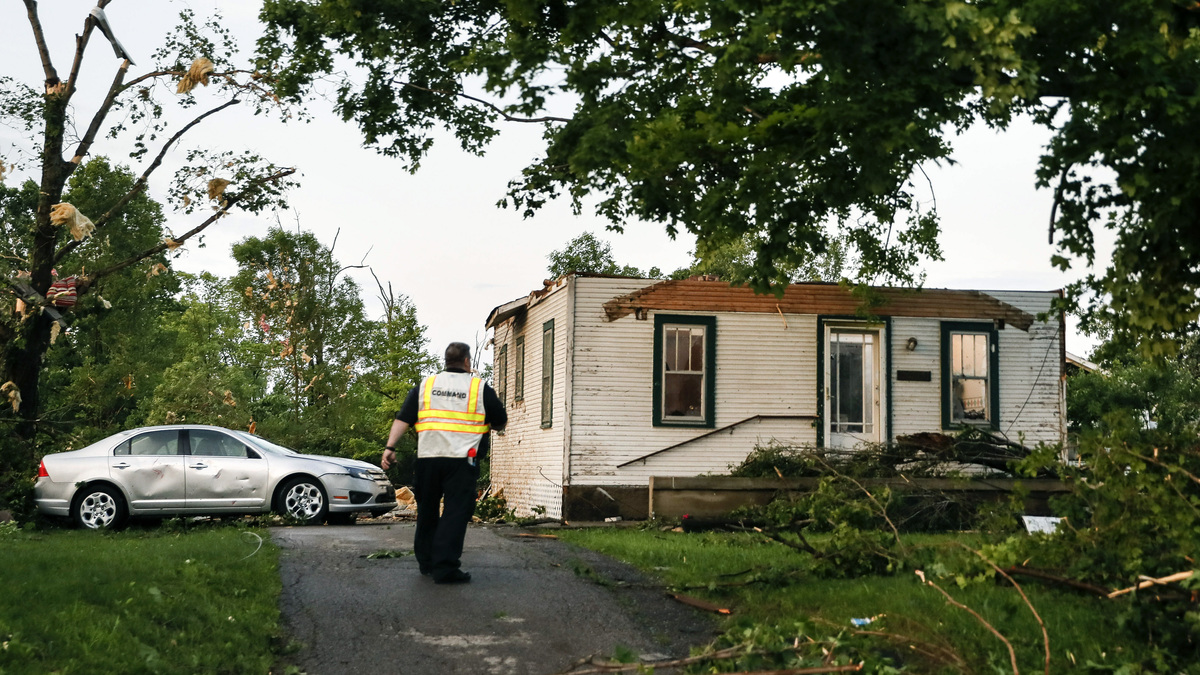 Storm damage litters a residential neighborhood, in Dayton, Ohio, Tuesday, after a rapid-fire line of apparent tornadoes tore across Indiana and Ohio overnight. The storms were packed so closely together that one crossed the path carved by another.

"The first tornado warning went out one minute before 9 p.m. in Wayne County, West of Richmond. The last warning was issued a few minutes before 2 a.m. in Hocking County," member station WYSO reports. "In all, officials issued 36 tornado warnings, one flash flood warning, and recorded multiple instances of golf ball-sized hail in the Dayton area Monday night."

In addition to Dayton and Celina, extensive damage has been reported in New Madison, Laura and Laurelville in Ohio, the National Weather Service says. The agency adds that due to "the magnitude and expanse" of the devastation, it will take several days for its crews to conduct damage surveys.

The list of injured people in Dayton includes some who had to be pulled out of severely damaged buildings, Payne said. He credited the early warning system that informed the public of an impending dangerous tornado system — and he praised residents for following instructions to seek shelter.

Images from the scene show residential neighborhoods that have seemingly been turned into disaster areas. Officials say they're still tallying the number of damaged buildings.

The area suffered a "tornado outbreak," the NWS says, posting a map showing more than a dozen places where tornadoes may have struck, from the Ohio-Indiana border to several spots east of Columbus. In at least one spot northwest of Dayton, two circulation systems capable of generating tornadoes crossed each other's paths.

"Tornadoes did not necessarily occur in every indicated area, but multiple tornadoes have occurred," the weather service says. 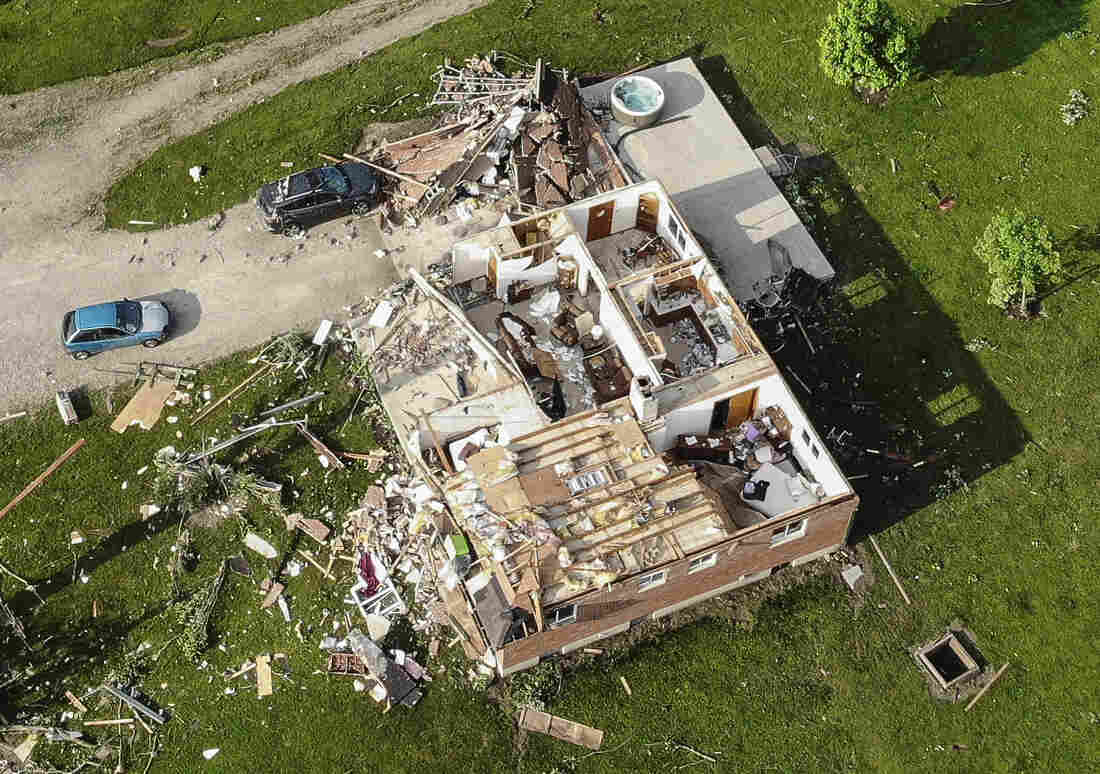 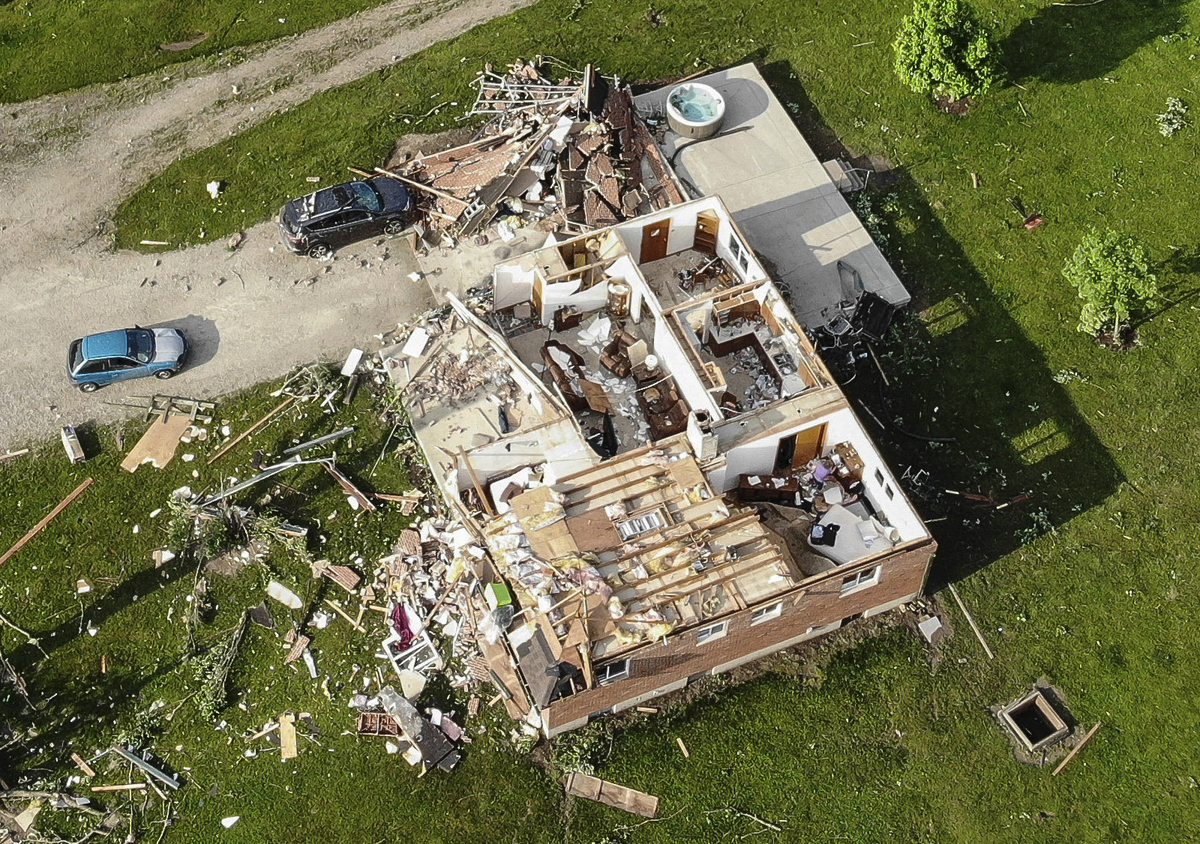 Several tornadoes touched down in highly populated areas in and around Dayton, Ohio.

The NWS sent out urgent bulletins overnight, warning that dangerous twisters were causing considerable damage and urging people to stay out of harm's way.

Tornadoes were reported in Mercer, Darke, Miami and Montgomery counties. Search and rescue crews are now combing through the area, including "live find" crews and dogs that can help find victims of the powerful storm, officials said.

Several areas of Dayton were hit hard, fire officials said, along with nearby areas of Troy and Stanley. In addition to trees and power lines, the tornadoes peeled roofs off of houses, brought down businesses' walls and collapsed ceilings.

"Debris being lofted into the air by a tornado south of Circlevile, Ohio," the NWS tweeted just after 1 a.m. ET.

[1:03 AM] DEBRIS BEING LOFTED INTO THE AIR BY A TORNADO SOUTH OF CIRCLEVILLE, OHIO. IF YOU ARE IN STOUTSVILLE OR TARLTON, TAKE COVER NOW. THIS IS A DANGEROUS SITUATION!

Multiple buildings have collapsed and at least one house has been cut in half, KOCO meteorologist Michael Armstrong relayed on Twitter. He added that a "¼ mile stretch of power poles broken. ... Medics having difficulty accessing areas."

Reports of gas leaks came in all night long, fire officials said Tuesday, adding that with a new day starting, new risks could arise as people turn on their home appliances.

Due to widespread power outages, the city of Dayton is asking residents throughout Montgomery County to conserve water. "We have lost power to both water plants and pump stations," officials said on Twitter. Those plants will rely on generator power until electricity can be restored.

The last large storm to hit Dayton came in 2008, when Hurricane Ike knocked the city into a blackout for about a week. But in that case, its water supply was not affected, officials said Tuesday.

Due to the widespread power outages we are asking all Dayton and Montgomery County Customers to conserve water. We have lost power to both water plants and pump stations. First Responders are performing search and rescue operations and debris clearing. #daytontornado

Even before the tornadoes hit, an earlier storm already had raged through the Miami Valley, knocking out power to tens of thousands of residents. Dayton Power and Light reported more than 64,000 customers were without power as of 2 a.m. By 7:30 a.m., that figure had dropped to 55,000 of the utility's 520,000 customers.

"We expect this will be a multi-day restoration," DP&L said on Tuesday.

The NWS office in Wilmington, Ohio, estimated that at the worst point, the storms and tornadoes left about 5 million people without power.

In some hard-hit neighborhoods, people were trapped in collapsed buildings, the NWS reported. And to reach those storm victims, firefighters and EMTs had to navigate streets that were littered with debris and downed wires.

Photos taken by the Dayton Daily News show cars with roofs caved in by fallen trees or under piles of wood from a destroyed house nearby. Another shows a two-story house with one of its walls ripped out. Remnants of commercial buildings whose brick or cinder block walls have collapsed are also depicted.

The city of Celina, northwest of Dayton, was particularly hard hit. Police are asking people to avoid driving into the city due to live wires and severe damage.

Emergency crews are still working through a backlog of calls, Payne said. He added that regional task force teams had been activated to help with the effort, bringing crews from Cincinnati and other cities. 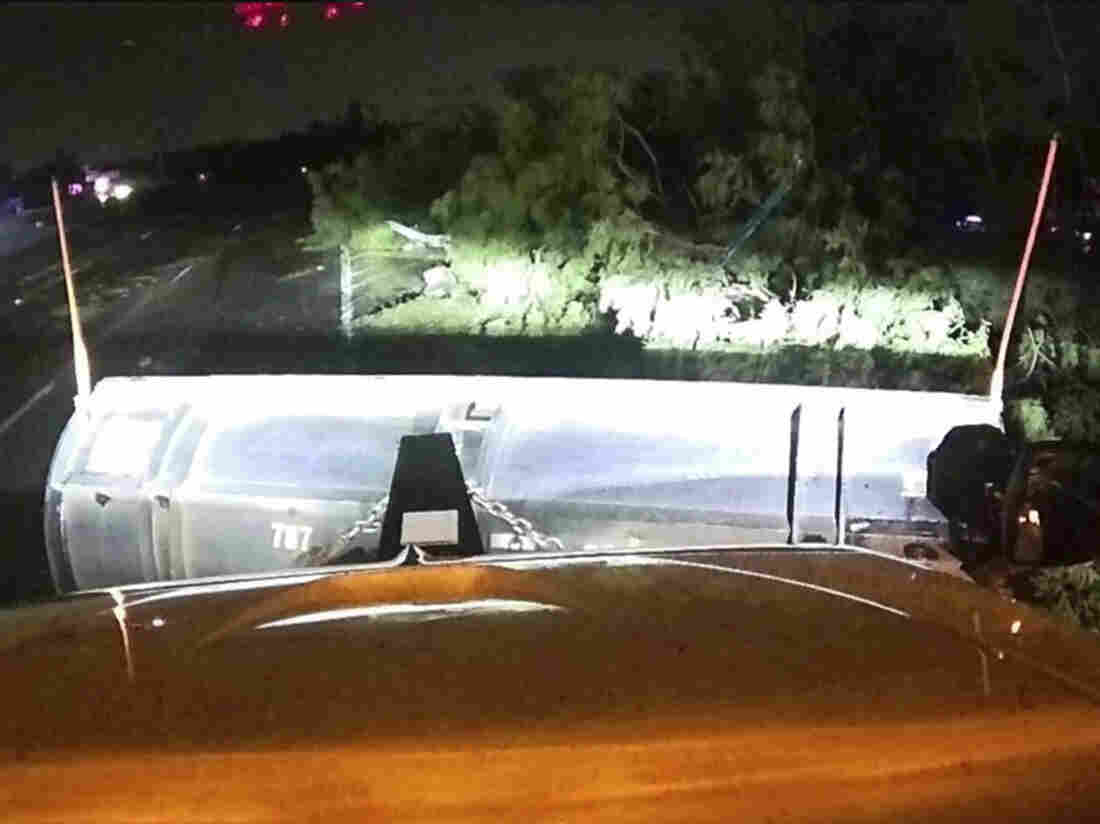 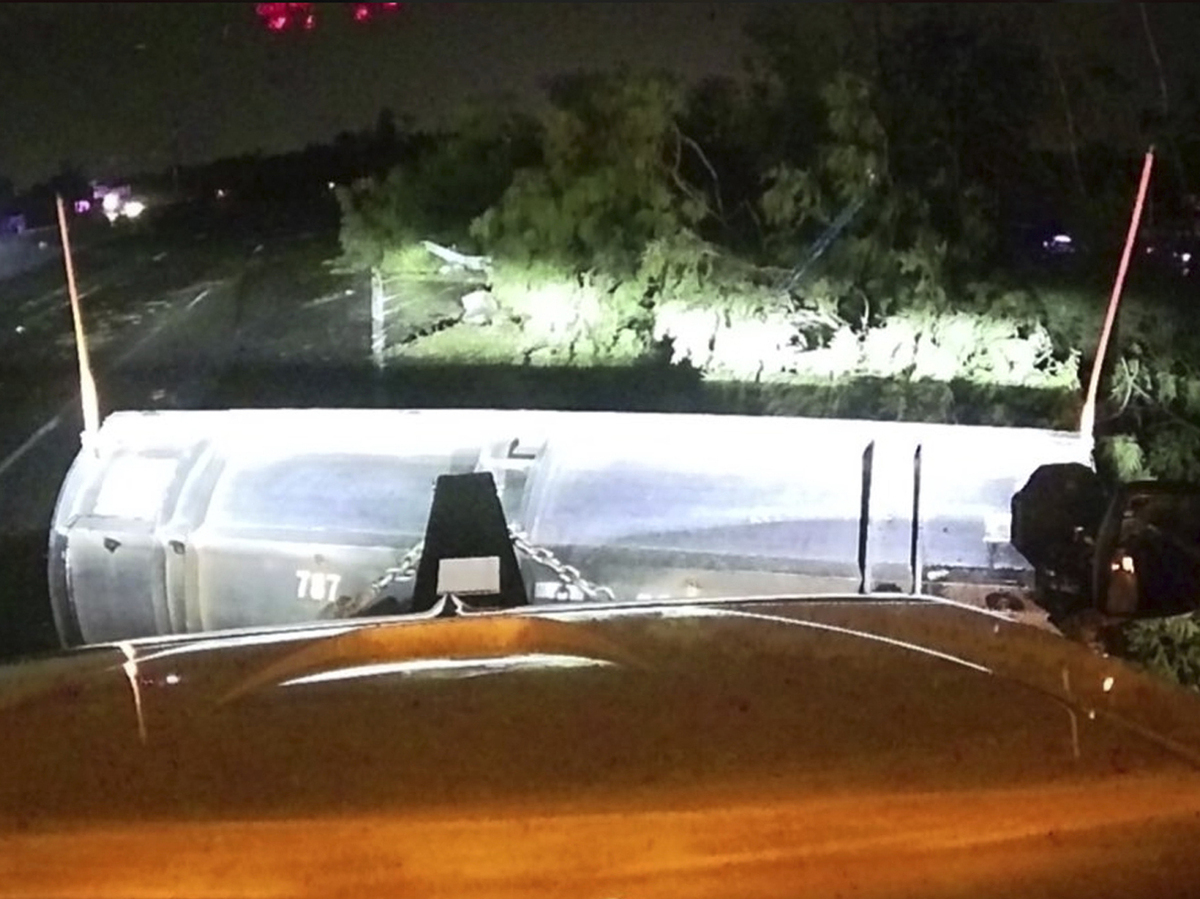 This image provided and posted by the Ohio Department of Transportation, early Tuesday, shows a view from one of the department's trucks as crews on Interstate 75 north of Dayton, Ohio, work to clean debris from the highway after a suspected tornado hit the area.

Ohio Department of Transportation via AP

Montgomery County Sheriff Rob Streck said "that due to an overwhelming number of calls, the public should not call 911 unless something is sparking or someone is injured or in immediate danger," WDTN 2 News reported.

Debris from the storms blocked parts of I-75, forcing the Ohio Department of Transportation to ask motorists to avoid the interstate. The agency posted photos to Twitter showing snow plows being used to push fallen trees off I-75 north of Dayton. After it was cleared, the DOT said motorists were causing new delays — by slowing down to gawk at the storm's effects.

"If you want to look at storm damage we ask that you exit the interstate and pull over," the agency said.

Here’s a live look from our ODOT trucks as crews clear debris off of I-75 north of Dayton. Please avoid this area while we work to clear the interstate following the storm. pic.twitter.com/IHzRJEYRsT

NWS forecaster David Roth told NPR the violent weather is part of an unusual pattern that has also brought flood worries to Arkansas and Oklahoma, where a tornado in El Reno left two people dead on Saturday. Roth said it may take up to a week for the weather pattern to change and return to calmer conditions.

The storms hit Dayton just two days after the city's police were called on to maintain peace during a Ku Klux Klan rally on Saturday.

The Red Cross has set up a number of shelters to help people whose homes were damaged by the storm. One challenge in opening shelters, officials said, was to find large spaces that still had power. Other organizations are also working to aid recovery and shelter efforts, as member station WVXU reports.