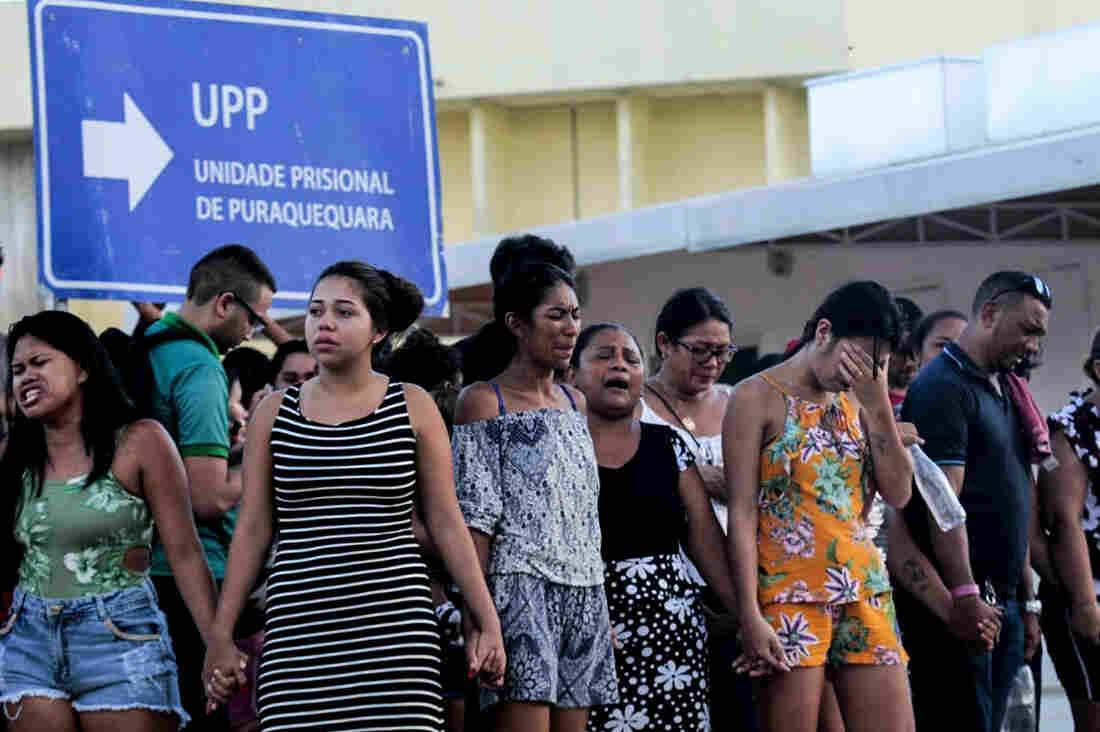 Family members of inmates wait and pray in front of the Puraquequara prison in the city of Manaus, the capital of northern Brazil's Amazonas state, on Monday. Dozens of inmates were killed in four jails in northern Brazil on Sunday and Monday, authorities said, in the latest wave of violence to rock the country's severely overpopulated and dangerous prison system. Sandro Pereira/AFP/Getty Images hide caption 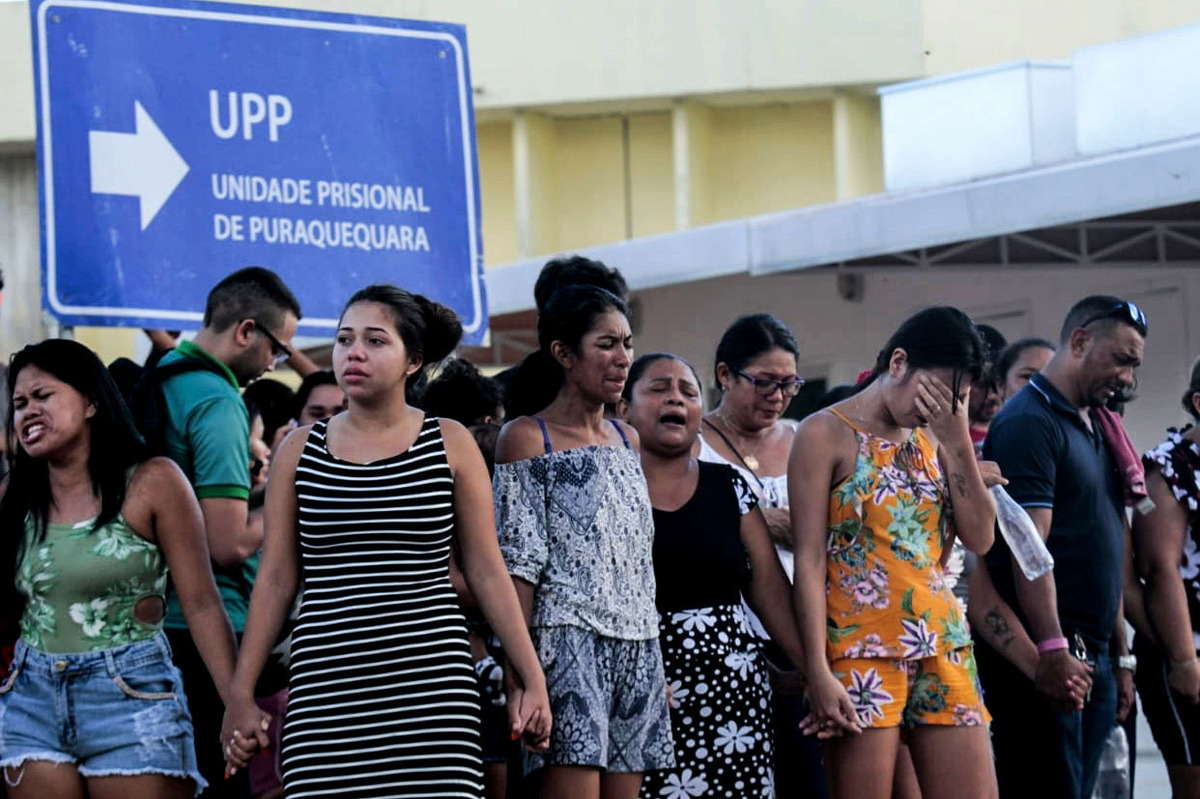 Family members of inmates wait and pray in front of the Puraquequara prison in the city of Manaus, the capital of northern Brazil's Amazonas state, on Monday. Dozens of inmates were killed in four jails in northern Brazil on Sunday and Monday, authorities said, in the latest wave of violence to rock the country's severely overpopulated and dangerous prison system.

Robert Muggah is the co-founder of the Igarapé Institute, a Brazil-based think and do tank that focuses on security and justice across Latin America, Africa and Asia. He is also co-founder of the SecDev Group, a digital consultancy working in the Middle East, Eurasia and South Asia. He advises governments and business and civil society groups in Latin America and around the world on data-driven and evidence-based security, justice and new technologies.

Once again, Brazil's hellish prisons are making global headlines. The spotlight this week is on Manaus, the capital of the country's northern Amazonas state, where violence at different prisons left 55 inmates dead.

On Sunday, the mutilated bodies of 15 prisoners were discovered at one Manaus prison, many of them reportedly showing signs of strangulation and stab wounds from sharpened toothbrushes. Another 40 bodies were recovered on Monday from three other prisons, reported to have signs of asphyxiation.

In virtually any other country, prison massacres on this scale would trigger a national crisis and high-level resignations. In Brazil, it barely registers on most people's radar.

Many Brazilians are numb to violence, especially when it occurs in prisons. The country has the highest number of recorded homicides in the world, more than 51,000 last year, according to official statistics assembled by a group of independent researchers. Brazil also registers the world's third-largest prison population, over 704,000 inmates. That figure is almost twice the amount of available cell space — just under 416,000 — which leads to severe overcrowding, inhumane conditions, brutal riots and periodic jailbreaks.

While the latest outbreak of prison violence in Manaus is still under investigation, it is likely connected to disputes between warring drug factions. The fact that the killings occurred simultaneously across multiple prison facilities suggests it involved the settling of scores between gangs. That many of the victims were killed in front of their families during visiting hours only adds to the horror.

These kinds of gruesome acts are performative — they are intended to send a message to rank and file and rival factions. The more violent, the more effective they are at keeping gang members in line.

State authorities speaking to the local media played down the idea that rival drug factions were involved, describing it instead as a violent internal disagreement that spiraled out of control. Amazonas' secretary for penitentiary administration, Marcus Vinícius de Almeida, added that the state should not be held responsible since prisoners will kill one another if they want to. The mayor of Manaus, Arthur Virgílio Neto, admitted that the state had lost control and that there was open warfare between rival gangs.

Historically, prison violence has broken out over drug gang disputes or frustration over dire prison conditions. The conditions in most of the country's jails are inhumane, often crowding dozens of people into spaces designed for a handful. A former justice minister once declared that he'd rather die than spend time in a Brazilian jail cell. 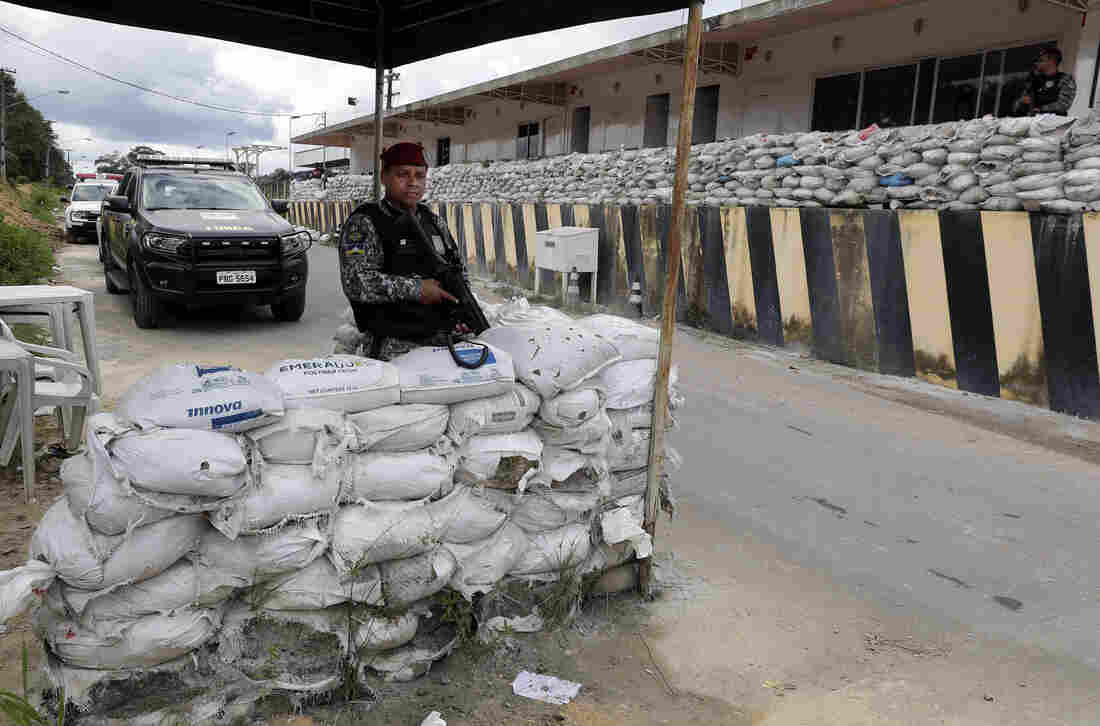 A Brazilian police officer stands guard at the entrance of the Anísio Jobim Penitentiary Complex in Manaus, Brazil, Tuesday. Dozens of inmates were killed in different prisons in Amazon state on Sunday and Monday. Andre Penner/AP hide caption 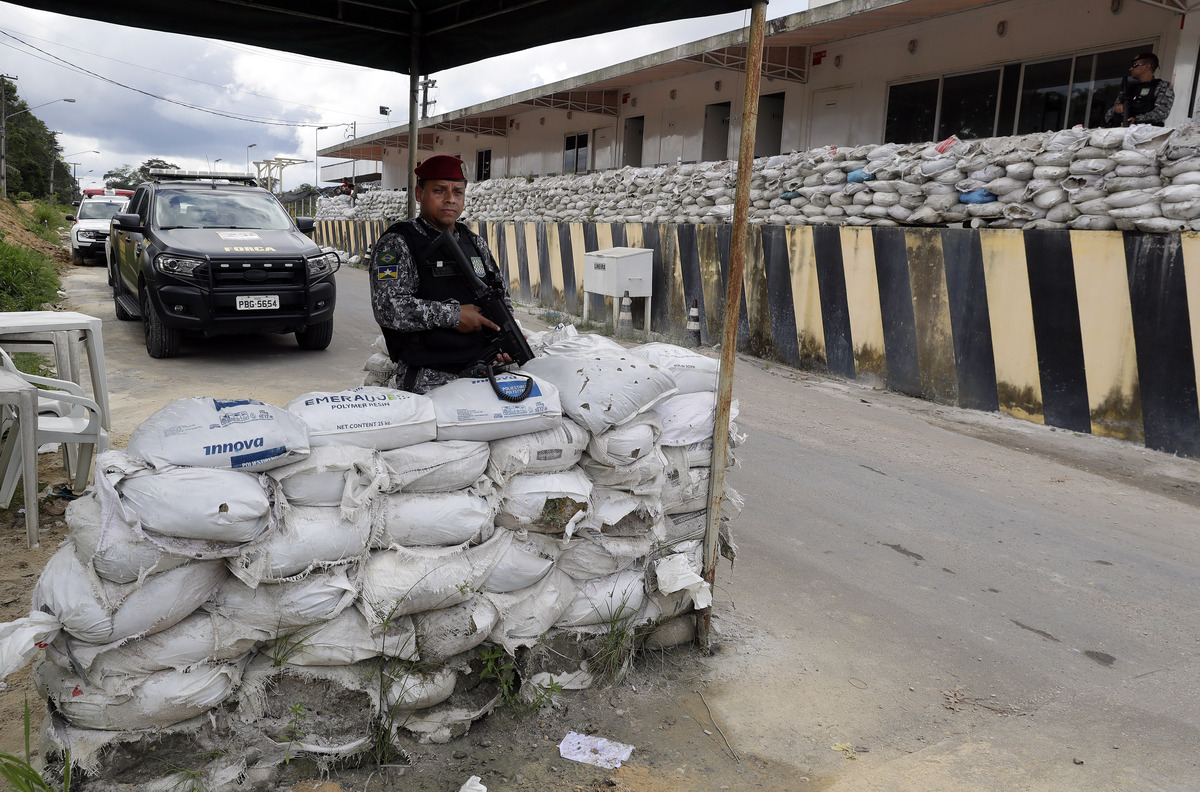 A Brazilian police officer stands guard at the entrance of the Anísio Jobim Penitentiary Complex in Manaus, Brazil, Tuesday. Dozens of inmates were killed in different prisons in Amazon state on Sunday and Monday.

The latest prison massacres share uncanny resemblances with the violent outbreaks that spread across northern Brazil in late 2016 and early 2017. In January 2017, another 56 people were slaughtered in one of the same private prisons, the Anísio Jobim Penitentiary Complex, as this week's carnage. Over the course of a few weeks in 2017, another 70 inmates were decapitated and stabbed to death in prisons across northern Brazil and dozens more escaped.

The bloodletting in 2017 was widely attributed to disputes between the Família do Norte gang and the Primeiro Comando da Capital, or PCC, who were fighting over control of the prison system and the cocaine trade. This week the regional attorney general, Leda Mara Albuquerque, has already linked the latest outbreak of violence to the Família do Norte.

Brazil's prison violence is legendary. The homicide rate for inmates is six times higher than the national average. An especially brutal episode occurred in 1992, when 111 inmates were killed during a riot in the Carandiru prison in São Paulo. This incident led to the formation of the PCC, today Brazil's most powerful drug-trafficking faction.

Other prison massacres have occurred in the northern Rondonia state in 2002, the northeastern states of Maranhão in 2010 and Pernambuco in 2011, Rio de Janeiro in 2014, and across Rondonia and Amazonas in 2016 and 2017. In fact, 24 of Brazil's 26 states (and district capital) have suffered prison violence in the last decade.

The Amazonas military police's shock troops claimed to have brought Sunday's prison violence under control within 45 minutes. Families of several inmates disagree, describing scenes of chaos in the wake of the police intervention. Amazonas' prison authorities have said they are suspending visiting hours for all prisons across the state and are investigating who was behind the carnage.

The conditions in most of the country's jails are inhumane. A former justice minister once declared that he'd rather die than spend time in a Brazilian jail cell.

For its part, the federal government announced that it will deploy a penitentiary intervention task force made up of some 100 federal penal authorities and federal police to assist. There are already hundreds of troops stationed in Amazonas, many of them deployed there after the prison riots of 2017. Justice Minister Sergio Moro has also approved the transfer of several gang leaders to federal prisons.

These kinds of reactive measures are not enough to stem massacres from recurring. Deeper reforms are required. According to an official investigation of the 2017 prison riots in Amazonas, violence was allowed to escalate because the local penal authorities — some of whom knew about a planned "rebellion" brewing in the prisons — failed to notify the state military police in advance. There were similar red flags this time around.

The prisons also suffer from massive shortages of staff: There are just one judge and two prosecutors responsible for handling as many as 17,000 cases a year and inspecting the state's eight prisons. Making matters worse, the private company managing Anísio Jobim prison, Umanizzare, was singled out for offering uneven services and charging double the cost per prisoner than the national average.

The reality, however, is that Brazil's prison problem is tremendously hard to fix. One of the reasons is because they are often literally administered by drug factions who serve as judges, jurors and executioners. Most prisons are divvied up among competing gangs, and the government exerts nominal control.

Much of Brazil is socially conservative and supports a strong prison system and tougher sentences. Recent polls suggest most of the public favors lowering the age of criminal responsibility from 18 to 16. This partially helps explain the appeal of President Jair Bolsonaro, elected in October 2018 on a tough-on-crime ticket.

The latest Manaus killings are almost guaranteed to inspire retribution inside and outside the prison walls. Amazonas is already one of Brazil's most violent states. The homicide rate in its capital city is 45 per 100,000 last year, almost twice the national average. As recent history has shown, Brazil's prison wars often spill onto the street and spread across state borders.

To reform the penitentiary system, Brazil needs to step back from its policy of mass incarceration. Since 2018, just over 8,650 prison spaces were built in the country — but the number of new inmates jumped by more than 17,800 over the same period, according to national news sources.

At a minimum, the government needs to focus on reducing both the stock and flow of inmates. This means drastically reducing the number of pretrial detainees, who currently make up an estimated 36% of the entire caseload. Federal and state-level judges, prosecutors and public defenders need support to resolve outstanding cases. Much greater attention is needed to rehabilitate first-time offenders and keep at-risk adolescents from joining a gang — 70% of Brazilian offenders end up back in jail within five years.

Brazil's government needs to deliver a comprehensive strategy for public security, and the penal system in particular. Rather than imposing harsher sentences and building new prisons, the authorities need to ensure suspects are provided with a hearing within 24 hours of their arrest and expand the network of public defenders.

But real change must go beyond reforming sentencing procedures and improving prison conditions, though both are necessary. Brazil needs to decriminalize drugs, promote proportional sentencing and offer rehabilitation opportunities for offenders — all of which are dim prospects in a country inured to violence.