Accessibility links
Robert Mueller Steps Down After Leading Justice Department Russia Probe Mueller, a decorated veteran and long-serving prosecutor, returned to public life to lead the most-watched — and yet lowest-profile — Washington investigation in a generation. 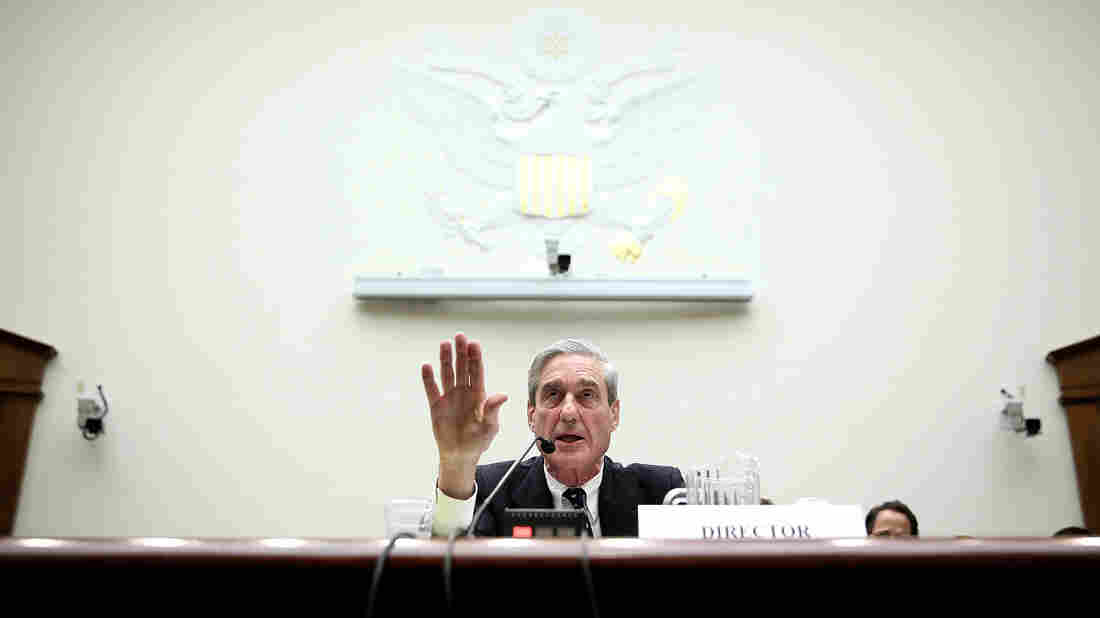 Robert Mueller is one of the most decorated law enforcement officers of his generation and was the longest-serving FBI leader since J. Edgar Hoover. Alex Wong/Getty Images hide caption 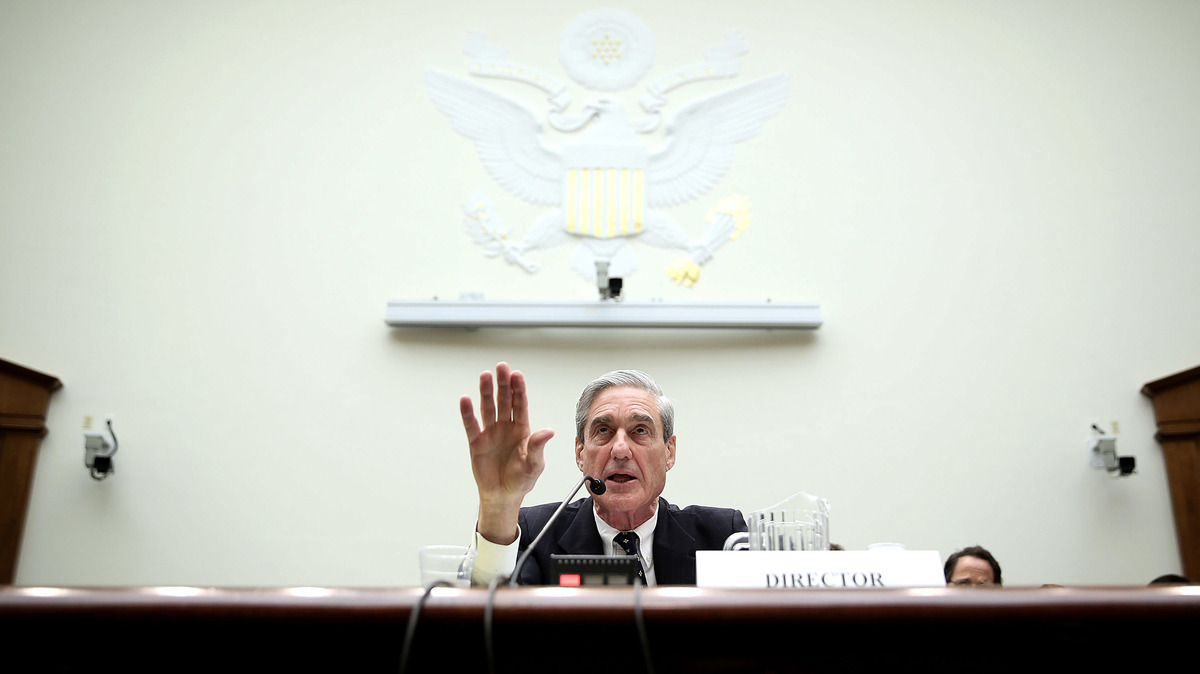 Robert Mueller is one of the most decorated law enforcement officers of his generation and was the longest-serving FBI leader since J. Edgar Hoover.

Special counsel Robert Mueller stepped down Wednesday after concluding not only one of the highest-profile investigations in recent history, but one of the most distinctive codas in the career of any top Washington official.

Mueller addressed reporters at the Justice Department in his first public statement since taking over the Russia investigation, ending two years of near-silence even under one of the hottest spotlights ever to burn on a public figure.

Mueller's remarks echoed the findings spelled out in his exhaustive, more than 400-page long report into Russian interference in the 2016 election and potential obstruction of justice by President Trump.

On the issue of Russian interference, Mueller said, "there were multiple, systematic efforts to interfere in our election, and that allegation deserves the attention of every American."

Addressing the issue of obstruction of justice, Mueller said that if his office "had had confidence that the president clearly did not commit a crime we would have said so."

But Justice Department policy precludes bringing charges against a president, Mueller said, meaning that an indictment for Trump was never in the cards.

With that, Mueller said that he was closing the special counsel's office so that he and his attorneys, investigators and other staffers could return to private life.

"Beyond what I've said here today and what is contained in our written work, I do not believe it is appropriate for me to speak further about the investigation or to comment on the actions of the Justice Department or Congress," Mueller said.

Mueller, 74, resigns as one of the most decorated law enforcement officers of his generation and was the longest-serving FBI leader since J. Edgar Hoover.

He was appointed in the spring of 2017 to take over the FBI's inquiry into whether Trump's campaign had conspired with Russia's interference in the 2016 presidential election.

Mueller, who also had interviewed to serve as a prospective director of the FBI following the removal of then-Director James Comey, returned to government service from private practice in the law firm WilmerHale.

Explaining that decision on Wednesday, Mueller said Justice Department policy explicitly prohibits him from charging a sitting president with a crime.

"The Constitution requires a process other than the criminal justice system to formally accuse a sitting president of wrongdoing," he said.

In the absence of any decision on obstruction charges from Mueller, Attorney General William Barr concluded there would be none.

That decision was "binary," as Barr later told lawmakers: Did Mueller's findings have sufficient weight to justify criminal charges? No, concluded Barr.

That announcement was hailed by Trump and his supporters and met with deep skepticism by Democrats and Trump's other opponents.

Mueller, who had become a cult figure for members of a self-styled "resistance" who prayed — in some cases, literally — that he could bring Trump down, instead delivered what Republicans called a political inoculation of a kind seldom enjoyed by a president.

A longtime registered Republican, Mueller served under presidents from both political parties, winning the confidence of attorneys general from John Ashcroft under George W. Bush to Eric Holder under Barack Obama.

"I don't know a person more dedicated to the concept and ideal of justice," Ashcroft told NPR after Mueller was named special counsel in May 2017. "Mueller is a person of character and insight, industry and integrity."

Under Trump, however, Mueller and his office endured withering criticism from the president himself and Republican allies who accused the special counsel of assembling "angry Democrats" to perpetuate a "witch hunt."

Mueller's investigation led to charges against some two dozen Russians on accusations of interfering in the 2016 election.

Trump's former longtime lawyer, Michael Cohen, pleaded guilty in a federal case in New York City that had been referred by Mueller's office, and he later entered a second guilty plea for lying to Congress.

Cohen and Manafort were sentenced to prison. Flynn and Gates are awaiting the resolution to their cases as they continue to cooperate with authorities.

But the president described Mueller's inquiry as a "hoax," rejecting the need for an investigation into whether there were any "links and/or coordination," as Mueller's commission described it, between the Trump campaign and the Russian interference in the 2016 presidential election.

Ultimately, Mueller did not charge any Americans with a crime connected to his initial mandate — "collusion," as it became known — but he did establish many previously unknown ties between Trump's camp and Russia, even as Trump was denying any communication or business links.

At the same time Trump was denying any business relationship with Russia, for example — as he was campaigning on the need to improve ties between Washington and Moscow — Cohen was negotiating a big potential real estate deal in the Russian capital.

Mueller's removal had been threatened for months, as a pressure campaign intensified after the special counsel team advanced to interview members of Trump's inner circle in the White House.

At least one of Trump's attempts to fire Mueller was rejected by then-White House counsel Donald McGahn — but the president didn't press the issue. He did, however, later ask McGahn to create a document denying the earlier incident had taken place, according to Mueller's report.

Critics called that obstruction of justice.

Trump has said all along that he did nothing wrong, and he pointed to the cooperation his administration gave to Mueller. All those witness interviews, including with McGahn, and documents could never amount to obstruction, Trump argued.

Even so, Trump said he also maintained that he had the power to fire Mueller, as he had fired former FBI Director James Comey, and remain within his power under the Constitution.

"I could fire everybody right now," Trump said last fall. "But I don't want to stop it because politically, I don't like stopping it."

Mueller made virtually no public statements to defend himself. Apart from a few comments in response to press reports by a spokesman, Mueller's office was a black box.

Mueller's resignation does not mean the end of cases connected to Trump.

Trump's friend and GOP political consultant Roger Stone, for example, is set to go on trial in the autumn in connection with charges that he engaged in witness tampering, lied to Congress and obstructed its inquiry into the role he played in 2016 as an alleged conduit to WikiLeaks.

Stone has pleaded not guilty and says he did nothing wrong.

U.S. attorneys offices up and down the East Coast also are believed to be investigating Trump, as are some state law enforcement officials — for example, those with jurisdiction over Trump Tower in New York.

And Democrats are using their majority in the House to pursue a number of their own inquiries into Trump and Russia, Trump's business practices, Trump's inauguration committee and other subjects.

Members of Congress also want to hear from Mueller himself.

The leaders of the House Judiciary Committee have agreed they want to call Mueller to testify about the conduct of his investigation.

What hasn't been arranged is when such a hearing might take place or whether Mueller would even agree to appear. Judiciary Committee Chairman Jerry Nadler said last week he believed Mueller wanted to talk with members of Congress behind closed doors.

Burning down the bureau

Trump opposed Mueller and targeted federal law enforcement from the beginning. For example, in December 2017, Trump said in a tweet that the FBI's reputation was "in Tatters."

And in early February 2018, he maintained that leaders at both the FBI and the Justice Department "have politicized the sacred investigative process in favor of Democrats and against Republicans — something which would have been unthinkable just a short time ago."

Former FBI Director Comey, whose firing in May 2017 prompted the appointment of Mueller, complained that the president and his allies had chosen a strategy to defend themselves that prompted them to decide to "burn down the entire FBI."

Deputy Attorney General Rod Rosenstein, the man who handpicked Mueller for the job to instill public confidence in the Russia investigation, defended Mueller amid attacks from Trump and Republicans in Congress.

Rosenstein pointed out that the special counsel had moved an FBI agent off the team quickly after his disparaging texts came to light.

"He is running that office appropriately, recognizing that people have political views but ensuring that those views are not in any way a factor in how they conduct themselves in office," Rosenstein testified before Congress in December 2017.

He had said that no one was more qualified for the complex and sensitive job than Mueller and that he had seen no "good cause" to fire him.