Accessibility links
NPR Review: 'The Rosie Result,' By Graeme Simsion The final volume in Graeme Simsion's Rosie trilogy — about an adorably dorky, autistic scientist and his wife and family — will enlighten readers about life on the spectrum, but may not charm them.

The Fizz Has Flattened Some In 'The Rosie Result'

The Fizz Has Flattened Some In 'The Rosie Result' 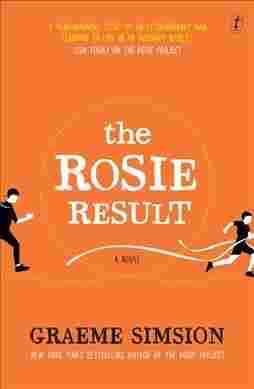 Once you pop the cork on a bottle of champagne, the bubbly effervescence lasts only so long. That's what seems to have happened with the somewhat flat final novel in Graeme Simsion's initially sparkling Rosie trilogy, about a geekily charming geneticist whose spot on the autism spectrum is evident to everyone but him.

The trilogy began with The Rosie Project (2013), a screwball comedy centered on Don Tillman's hilarious campaign to find a wife — a process in which he learned firsthand that unexpected emotions can unleash both mayhem and joy. The Rosie Effect (2014) found Don and Rosie ten months into marriage, living in New York and expecting a child. Simsion wraps up the series with The Rosie Result, which is largely focused on Don's latest campaign — to spare his brilliant but awkward 11-year-old son Hudson the unhappiness he experienced growing up.

Dedicated to "the many people in the autism community who have inspired and supported these books," the social objective of The Rosie Result is clear from the outset: to dispel all-too-common misconceptions and prejudices about what it means to be "on the spectrum" — a phrase that recognizes varying degrees of autism, but which is increasingly bandied about to characterize anyone who is less than optimally attuned to irony and social niceties. Simsion's goal is laudable, and this book thoughtfully addresses the advantages and disadvantages of formal diagnosis.

It's not hard to see why the Rosie novels — like Mark Haddon's The Curious Incident of the Dog in the Night-Time (2003) — have been welcomed by people in the autism community: Simsion's message of inclusiveness and embracing differences is lovely. But while this final installment may well educate readers outside that circle, it's less likely to charm them. It plods along to its heartwarming climax, generally more earnest than amusing.

Part of the problem is that when Don's rational-to-a-fault approach to life isn't offset by Rosie, his sarcastic comic foil, he can sound about as engaging as a refrigerator manual. But Rosie's primary focus in this volume, alas, is on battling her sexist boss's attempts to marginalize her in what was supposed to be her new dream job.

Don, an "Einstein in overalls" whose default conversational response is "Correct," is still tightly programmed, with an idiosyncratic propensity for what he calls "time-sharing" — multi-tasking in pursuit of efficiency. (He learns the hard way that shucking oysters while doing squats is a recipe for disaster.) He tends to miss nuance, but his gaffes aren't as funny as I suspect Simsion wanted them to be.

Don's biggest misstep is what he refers to as the Genetics Lecture Outrage, a distressing consequence of his unfortunate, unorthodox response to a student's question about whether race has a genetic basis. (It involves lining up students by skin shade.) This leads to serious trouble, which Don might be able to mitigate by admitting to autism.

The Rosie Result addresses multiple forms of discrimination, including not just a tendency to label all but the "neurotypical" as weird, but gender prejudice as well. So for a variety of reasons, including marital equity, Don takes the lead in dealing with Hudson's problems adjusting to his new school after the family moves back to Australia for Rosie's job.

While this final installment may well educate readers ... it's less likely to charm them. It plods along to its heartwarming climax, generally more earnest than amusing.

Don's approach to life is cerebral and methodical, and the Hudson Project (as he calls it) involves working his way down a long checklist of life skills he deems essential for happiness — including bike-riding, sex education, and making friends. This is a case of the clueless leading the clueless: For sex education, Don compiles a video of animals mating, which he gives to Hudson on his way to school. Oops.

The trouble is that Hudson interprets his father's campaign as a signal that he's not good enough the way he is. The rosy news is that while Hudson may share a lot of qualities with Don, he's smart and resourceful enough to devise several surprising workarounds.

A roster of atypical characters, including Hudson's albino friend (named Blanche!), whose father is an anti-vaxxer with serious anger issues, infuses some fizz. When Don learns that "Rabbit" Warren, Hudson's insensitive teacher, called the boy a "grammar Nazi" — fueling classmates' taunts — his comment is priceless: "'No filter,' I said, without thinking."

It quickly becomes apparent that father and son are on parallel learning curves, and both may be able to dodge some sticky situations by agreeing to submit to testing for autism. Why resist, then? A woman at a seminar on autism sums up the issue: "In the end, it's your choice, your identity. Diagnosis is for diseases." In the end, The Rosie Result is about learning to be comfortable with who you are.