Accessibility links
Geto Boys' 'Mind Playing Tricks On Me' Is Hip-Hop's Anxiety Anthem Gangsta rap had been known as aggressive, rebellious and political, but the Geto Boys' 1991 hit made it something new: vulnerable. Hip-hop's relationship with mental health has never been the same. 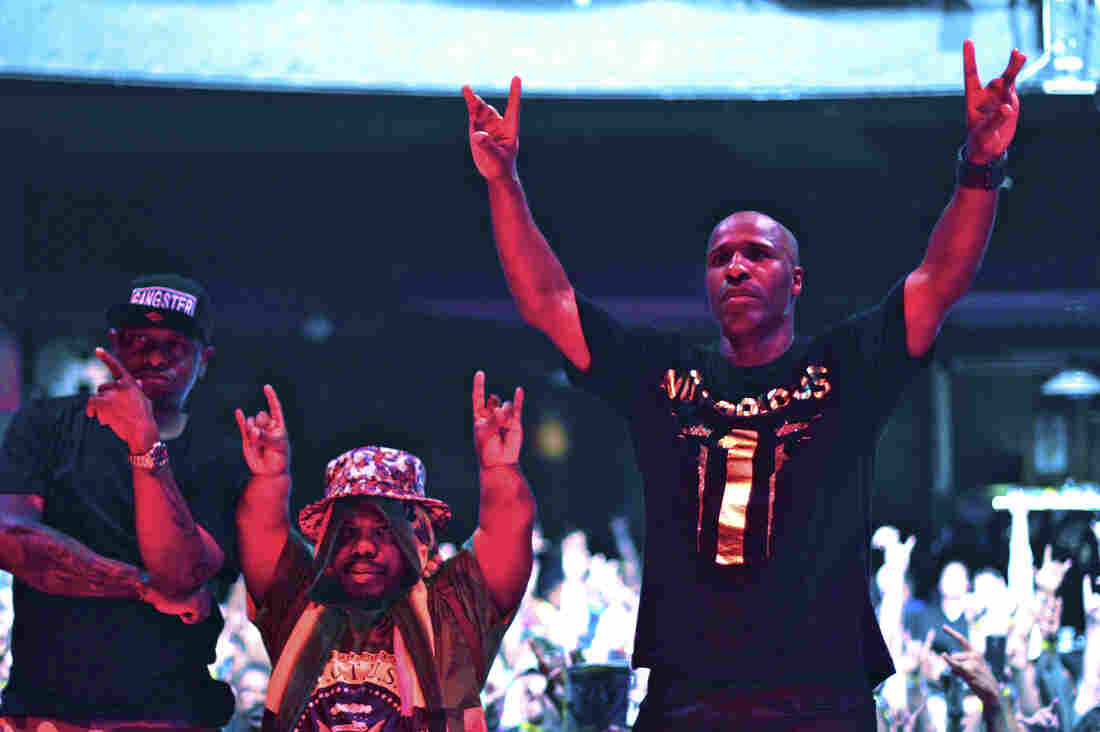 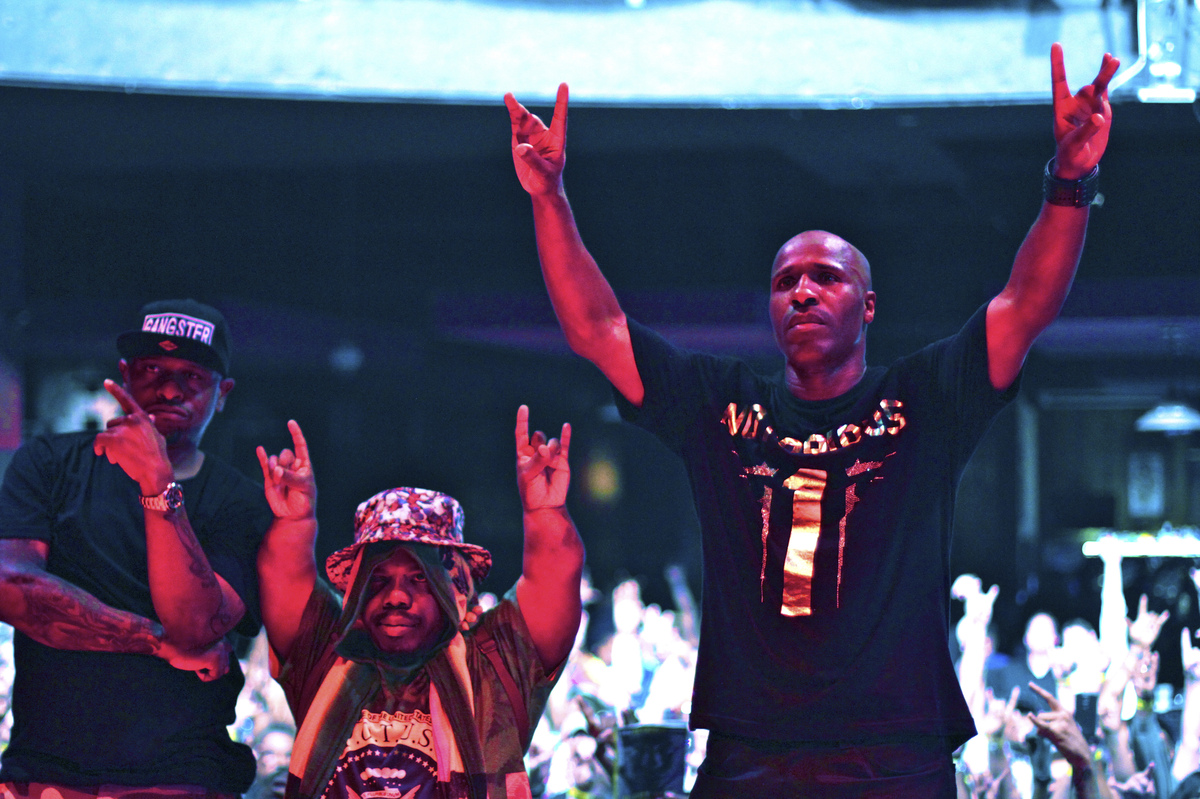 Left to right: Scarface, Bushwick Bill and Willie D of the Geto Boys perform in Houston in 2015.

When HBO's drama The Sopranos began airing in 1999, the idea of a mob boss seeking therapy was revolutionary. But Tony Soprano wasn't the first gangster to expose his sensitive side to the world: That distinction came nearly a decade earlier, thanks to three gangstas of a different stripe.

The year was 1991. John Singleton's Boyz n the Hood was playing on the big screen. Rodney King's beating by LA cops was on virtual loop on the small screen. And "Mind Playing Tricks on Me," by the Houston rap trio Geto Boys, was bumping out of nearly every car with speakers in the trunk, putting a voice to the angst and paranoia that defined what it meant to be a young black man in America at the time.

When "Mind Playing Tricks" came out, the Geto Boys were already legendary in the South. It was hard not to stand out with a group that included Willie D, a former Golden Gloves boxer; Bushwick Bill, a brash Brooklyn transplant and former breakdancer who stood less than four feet tall; and Brad Jordan, a lyricist with enough street cred to wear the stage name of rap's most celebrated kingpin: Scarface. He wrote three of the four verses in this song, originally intended for his solo album until Rap-A-Lot Records founder J. Prince decided it was the breakout record he needed for the label's flagship group.

Advisory: This video contains profanity and depictions of violence.

But it's Scarface's grandmother who deserves credit for the song's title. "It was a strange way of how he came about it," she told MTV several years ago. "I come through the room and I think I was just kinda mumbling to myself or my lips was working or something. He said, 'Mawmaw, what you talking about?' I said, 'Oh nothing, my mind's just playing tricks on me.' And didn't have no idea he was gonna go out and be making a song about it."

A multi-instrumentalist from a long line of musical talent, Scarface had been a fan of metal as a kid. But growing up in Houston's Southside introduced him to a different kind of hard rock: He went from dropout to local drug dealer coming up. He also spent some time in a hospital psych ward, after trying to kill himself once as a teenager.

Learning to articulate his feelings must have contributed to making him the coldest songwriter in rap, more Southern Gothic than Edgar Allan Poe. Just listen to him in the song's third verse: One moment he's in church praying for an exit out the drug game; the next, he's contemplating suicide.

Day by day it's more impossible to cope
I feel like I'm the one that's doin' dope
Can't keep a steady hand, because I'm nervous
Every Sunday morning I'm in service
Prayin' for forgiveness
And tryin' to find an exit out the business
I know the Lord is lookin' at me
But yet and still, it's hard for me to feel happy
I often drift when I drive
Havin' fatal thoughts of suicide
Bang and get it over with
And then I'm worry-free, but that's bulls***

This was confessional rap — street ministry. Scarface was acknowledging emotions a generation of black boys had been conditioned to hide.

Gangsta rap may have been America's nightmare in the '80s and '90s, but it was also America's creation. There's a post-traumatic stress that comes along with being black in this country: It's almost part of your inheritance. And the feeling was compounded by the crack era, by the war on drugs, by over-policing and mass incarceration. This was the era when it wasn't at all unusual to hear young black men referred to as an endangered species — and the worst of it is, we were being told that we were the ones we should fear the most.

'Fight The Power': A Tale Of 2 Anthems (With The Same Name)

The music of that era was rebellious; it was aggressive. It was misogynistic and hyper-masculine to a fault. It was definitely political, even if it was far from "conscious" rap. But one thing it hadn't much been up until that point was vulnerable. "Mind Playing Tricks" became that first vulnerable gangsta rap song. In the lyrics, the Geto Boys were still hardcore hustlers, but they weren't glorifying the streets — they were traumatized by them. The beginning of Willie D's verse tells the story:

I make big money, I drive big cars
Everybody know me, it's like I'm a movie star
But late at night, something ain't right
I feel I'm being tailed by the same sucker's headlights

All of a sudden, the villains depicted on record — and by society — were cast as the victims. They were haunted by their own demons, but also by the economic degradation that hollowed out the hoods from which they came. The track got a creepy music video that would probably be labeled Afro-Surreal today, like something out of a Jordan Peele flick.

Geto Boys lowered their masks enough to reveal their inner fears, but you didn't have to be an ex-drug dealer like Scarface to relate. You didn't even have to be from the ghetto like Geto Boys. If you were black, if you felt the pressure of growing up with a target on your back, "Mind Playing Tricks" was your anxiety anthem. Our generation knew how to posture. We knew how to pose and play hard. But the survival tool we'd really been missing all this time was a way to process our pain, to process our reality.

Therapy was still a huge taboo — and really a privilege — that most black folks just weren't privy to. "Mind Playing Tricks" became the Trojan Horse, giving a generation the language to consider something we'd never let down our guard to talk about. Pretty soon, you even had preachers using the song as text for their Sunday sermons.

"The first time I actually heard the song analyzed and broken down was at church," says music journalist and Southern hip-hop historian Maurice Garland, recalling one of his earliest encounters with the song as a kid back in the '90s. "Somebody was preaching at church — you know how preachers do analogies with their sermons. He was like: 'And you know, it's like that Geto Boys song, when your mind's playing tricks on ya.' He was breaking down the depression, the drugs, the anxiety, the everything — he was corralling all of this into his sermon. That was one of the first rap songs that I remember where topics like that were even touched on."

After "Mind Playing Tricks," gangsta rap started to sound a little different. It was still hard, still raw and uncut. But now, it began to echo the blues tradition it grew out of. You had artists like MC Eiht rapping about how the "hood took [him] under." Or Spice 1 wearing "The Face of a Desperate Man." And Tupac crying all those thug tears.

Today, mental health is one of the biggest topics in hip-hop culture: Even as many still suffer in silence or die tragically from drug overdoses, many more conversations are happening in public. Last year, Kanye West called his bipolar diagnosis his "superpower" in an attempt to destigmatize mental illness. The importance of self-care is a constant theme on Black Twitter. Radio personality Charlamagne the God wrote a whole book, Shook One: Anxiety Playing Tricks On Me, about confronting his anxiety and getting help for it. (Scarface even wrote the foreword.)

And there isn't a popular rapper out there who doesn't owe their career to this song in some way — whether they know it or not. It gave an artist like Drake the range to wear his heart on his sleeve. It gave Kid Cudi his biggest hit in "Day 'N' Nite," a song he wrote while trying to make his own version of "Mind Playing Tricks." And it's gifted us a whole subgenre of emo rappers like Lil Uzi Vert, Juice WRLD and, yes, even Post Malone, who top the charts by pouring out their pain.

For so many artists and fans today, rap is still the closest thing they have to therapy. It's the space where artists articulate their trauma and and air out their toxic behavior. There's still pain, and a whole lot of the wrong coping mechanisms. But at least rappers who represent the streets aren't afraid to use their music as a way to express it anymore.

Meanwhile, the Geto Boys fight on. Willie D is still as politically outspoken as ever. Bushwick Bill is battling stage 4 pancreatic cancer, a diagnosis he recently revealed to the public. Then there's Scarface, easily one of the greatest rappers of all time. His grandmama told him her mind was playing tricks, and he turned it into something bigger than a hit: a diagnosis. Not just of black boys in the hood, but of the effects America's systemic ills were having on us.

If he made a new version of the song, "it would be bigger than me," he said in Charlamagne's book. "My paranoia would be based on my people going back into slavery." His mind could still be playing tricks. Or just maybe, 30 years later, he's seeing reality with more clarity than ever before.