Accessibility links
How Iran And Its Proxies Use Drone Warfare Iran has been developing drones for both itself and its proxies. In recent months those drones have been used for targeted assassinations, military strikes and to sow chaos in the region. 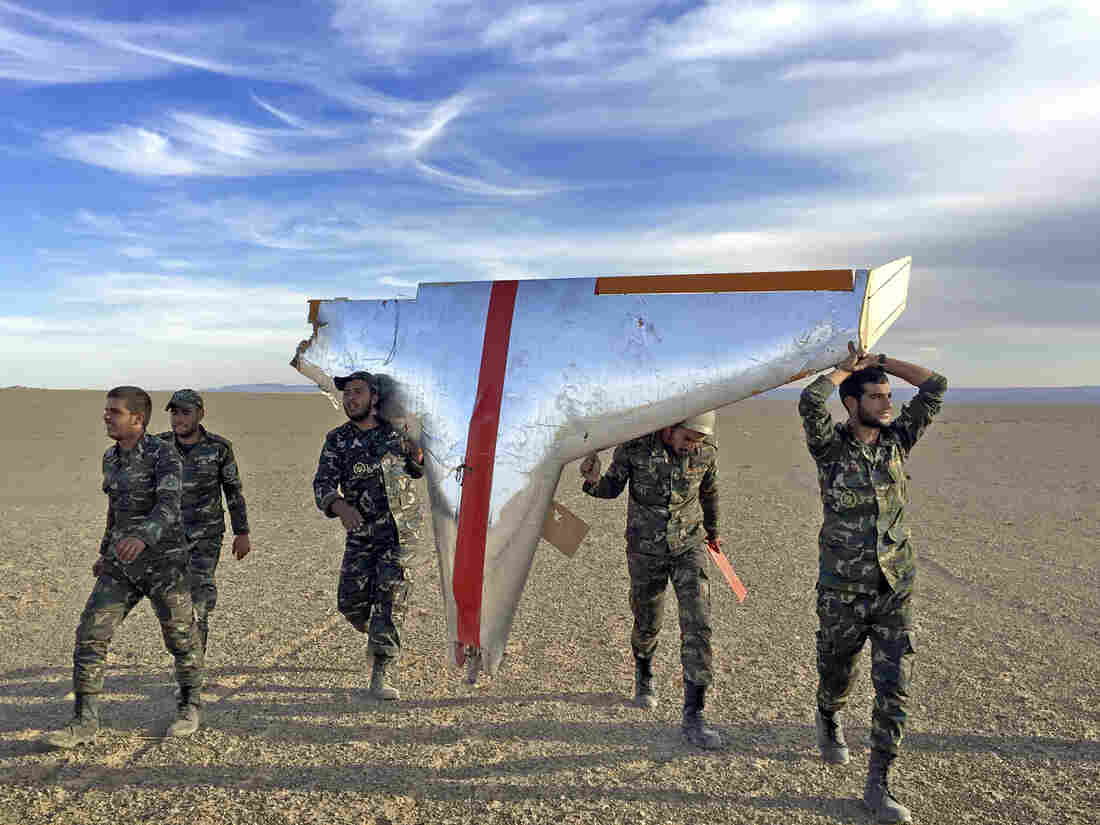 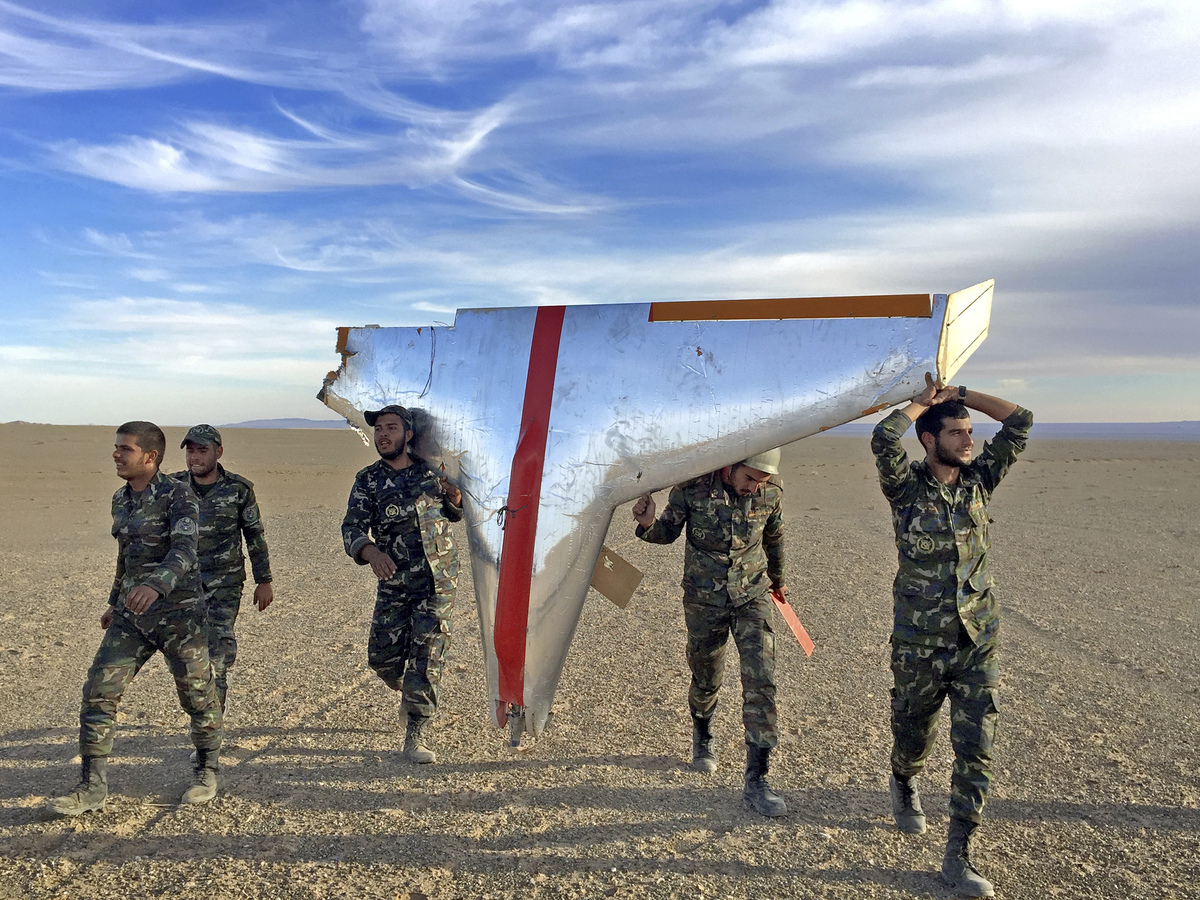 Iranian soldiers carry part of a target drone used in air-defense exercises. Iran is also turning some target drones into low-tech weapons for its proxies.

In January, a group of high-level military commanders gathered at an air base in Yemen. It was far from the frontlines of the country's ongoing civil war.

Then, without warning, a small drone appeared out of the sky and exploded, spraying the group with shrapnel. According to news reports, the blast killed several, including the Yemeni government's head of military intelligence.

"It's pretty scary because it's clear that these guys had no idea what had just happened," says Nick Waters, a researcher with the U.K.-based online investigative group Bellingcat who has been tracking the Yemen conflict.

Drones are nothing new in the Middle East. U.S. intelligence agencies and the military have been using unmanned aerial vehicles in the region for well over a decade. But smaller drones have begun proliferating, and they are increasingly finding a role on the battlefield. It's the clearest sign yet, Waters says, of a new era of drone warfare.

The weapon launched in January was sent by Houthi rebels, who control a large part of Yemen and are partnered with Iran. Waters says the drone was a glorified model airplane with an explosive on the front and a propeller on the back. It flew a preprogrammed route using GPS. "Although it's like relatively simple, it can be very effective," he says.

In recent weeks, Houthis have been stepping up attacks with these small drones. They've struck targets inside Saudi Arabia, including oil pipelines and air fields. On Sunday, Saudi state media reported it had successfully repelled the latest attack, which was attempted on an airport near the border with Yemen.

The small drones used by the Houthis pose some significant problems for conventional militaries, according to Nicholas Heras, a fellow at the Center for a New American Security. "They're difficult to stop because they're low profile," he says. "They don't give off a lot of radar signature, they fly relatively slowly." Moreover, using GPS, they can navigate through holes in air defenses.

According to the U.S. government and several independent researchers, at least some of the drone technology being used by the Houthis seems to come from their main sponsor in the region — Iran.

Iran started developing drones in the 1980s, says Gawdat Bahgat, a professor at the National Defense University. The work started in part because Iran was under various arms embargoes, and its air force was woefully out of date.

"Within this context, drones are perfect," Bahgat says. They provide air power for "a fraction of the cost of fighter jets."

So Iranian engineers began designing and building their own indigenous drones. Heras says those drones have ended up falling into two categories: advanced systems that are operated remotely by pilots on the ground, and simpler drones of the variety sent to the Houthis. 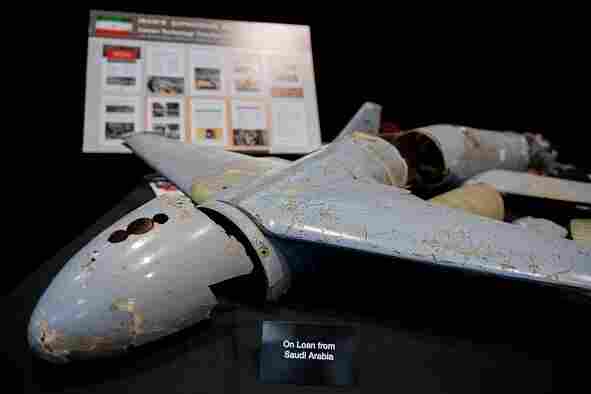 A Houthi drone on display in Washington. The U.S. and Saudi Arabia say the technology comes from Iran. Jim Watson/AFP/Getty Images hide caption 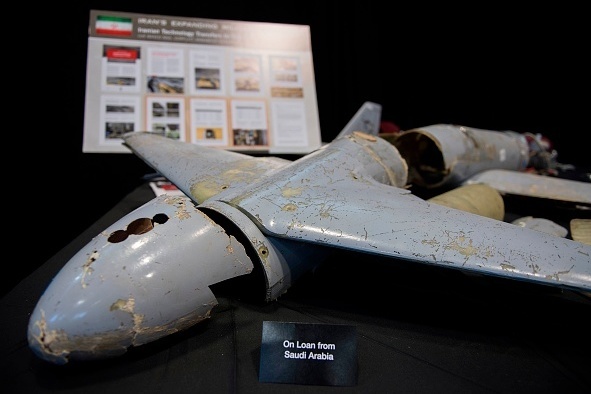 A Houthi drone on display in Washington. The U.S. and Saudi Arabia say the technology comes from Iran.

Iran kept its technology to itself until a few years ago, when the rival Islamic State, or ISIS, started gaining territory nearby.

"The rise of ISIS in Syria and Iraq was really the main driver behind Iran starting to deploy its drones outside of its borders," says Ariane Tabatabai, a political scientist at Rand Corp.

In fact, the Syrian civil war has been a drone testing ground for many sides in the conflict. Israel has sent drones to hunt Syrian air defenses. Russia has tried out its newest technology. Even ISIS used commercial drones to drop small explosives on its enemies.

Many of Iran's drones occupy a sort of middle ground between the advanced weapons of major powers and the off-the-shelf technology used by ISIS. Ali Vaez, an expert on Iran with the International Crisis Group, a conflict research organization, says taking cheap drones to the next level is exactly the kind of thing Iran is good at. "It is very much in line with Iranians' modus operandi," he says.

Vaez says these drones fit well with the nation's overall defense strategy: using asymmetric warfare and proxy groups to take on its enemies far from its own borders. He is not surprised by recent evidence that Iran is sharing not just its drones, but also drone technologies, so that partner groups, such as the Houthis in Yemen, can build their own drones.

"The Iranian mentality is generally that instead of giving fish to your partners and proxies in the region, you should teach them how to do fishing," he says.

Heras, with the Center for a New American Security in Washington, agrees: "These drones are meant to almost be the AK-47 of drones," he says. "They're easy to put together, they're easy to guide, and they have an effect on the battlefield. They're meant to sow terror in opponents and also to demonstrate that Iran and its proxy network can strike its opponents anywhere."

Heras worries that the drones could also be used in a conflict with U.S. forces. Although the drones are far too primitive to do much direct damage, they could be used to distract. A swarm of primitive drones, for example, could flood defensive systems, creating an opening for more powerful weapons like anti-ship and ballistic missiles.

Waters, who tracks weapons systems in Yemen and elsewhere, says low-tech drone warfare is here to stay. Small drones are showing up in conflict zones from Ukraine to the Philippines.

"These things are going to be around, simply because the capability they give is really, really useful, and they're not that expensive," he says. "If I wanted to start an insurgency, or start my own little militia, one of the first things I would do ... is to buy a drone."