Accessibility links
In Syria, Kurdish Anti-Terrorism Courts Take On ISIS Cases Kurdish Syrian authorities have tried 7,000 ISIS suspects in a justice system that bans torture and the death penalty. Some of the judges are women, which comes as a shock to ISIS fighters on trial. 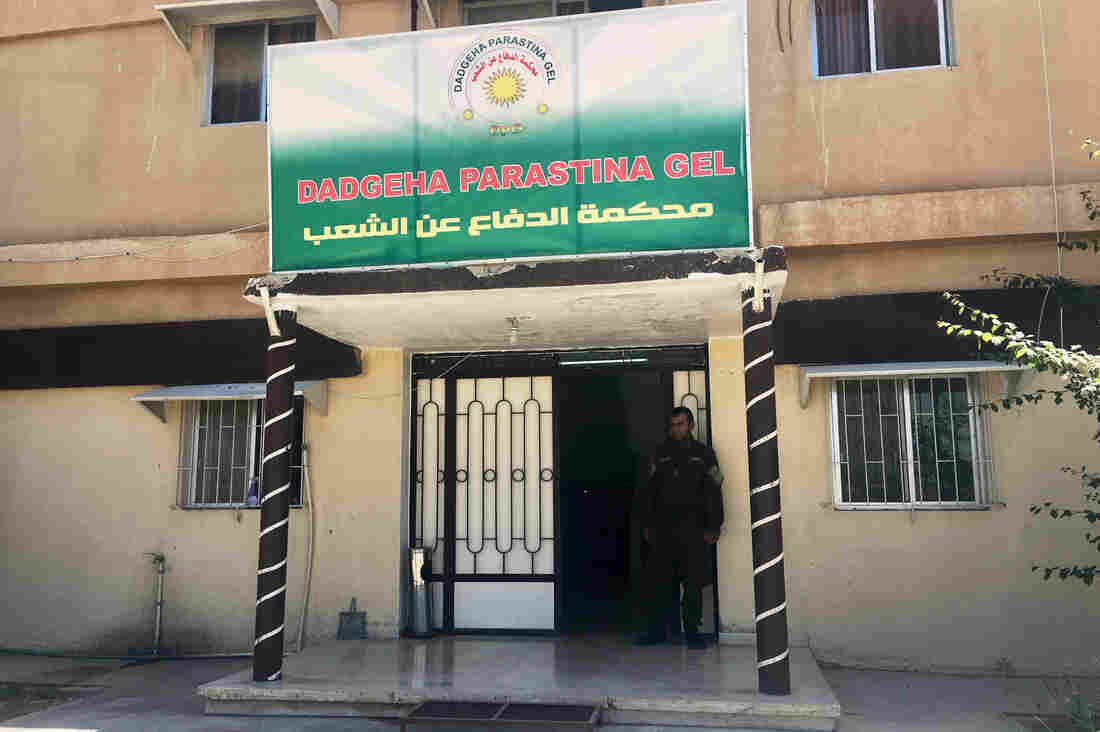 The People's Defense Court in the Rojava district of northeast Syria. Judges here have been holding trials of thousands of ISIS fighters. The Kurdish-led region broke from Syrian government control in 2012 and has developed its own justice system that it says adheres to Western standards of human rights. Jane Arraf/NPR hide caption 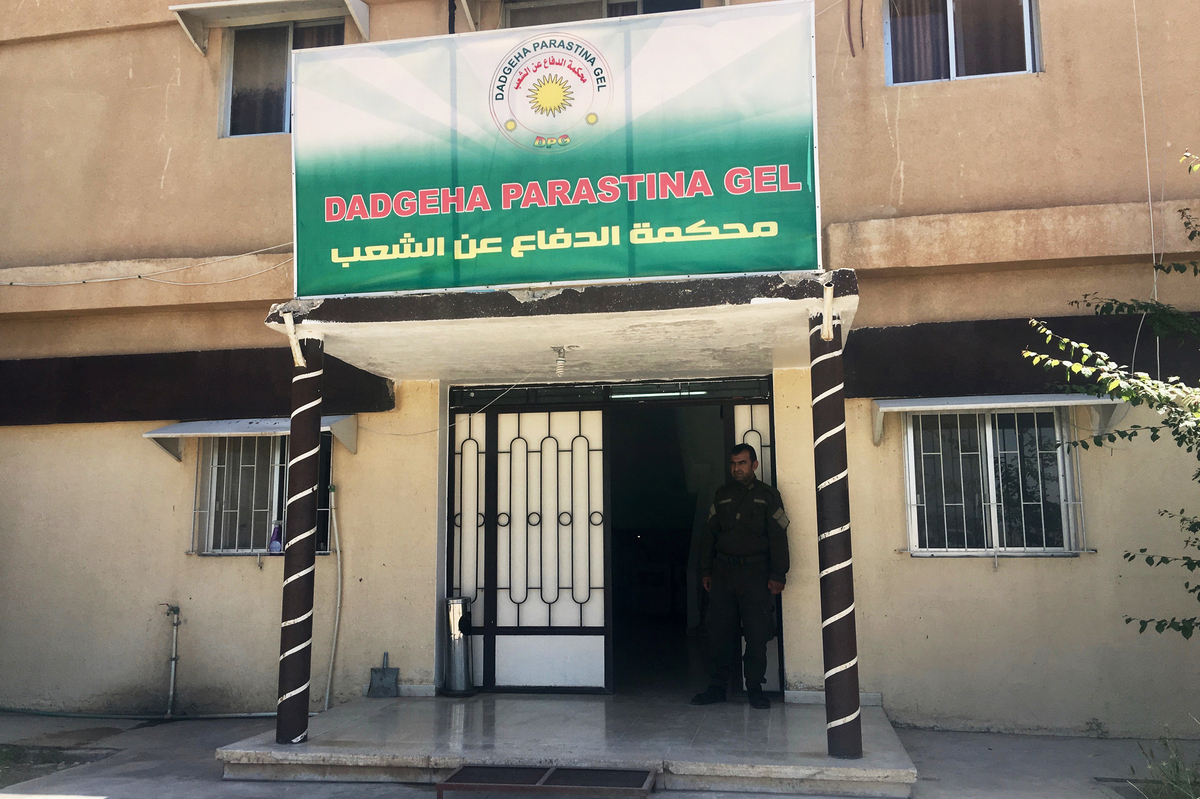 The People's Defense Court in the Rojava district of northeast Syria. Judges here have been holding trials of thousands of ISIS fighters. The Kurdish-led region broke from Syrian government control in 2012 and has developed its own justice system that it says adheres to Western standards of human rights.

Mahmoud Amir, a 22-year-old Syrian, walks in, wearing slippers, sweatpants and a black, long-sleeved T-shirt. He lowers himself into an office chair, facing three judges seated behind a long desk. In his hands, he holds the black fabric blindfold that guards have just removed from his eyes.

This is a terrorism court near the city of Qamishli, in the Kurdish Syrian region of Rojava in northeastern Syria. The region broke away from Syrian government control in 2012. Since then, this self-administered area, recognized by almost no country, has developed its own justice system aspiring to international human rights standards — a rarity in the region.

'We Pray For The Caliphate To Return': ISIS Families Crowd Into Syrian Camps

The Rojava courts have already tried and sentenced 7,000 ISIS suspects — most of them Syrian, and some Iraqi. Six thousand more are awaiting trial.

Earlier this month, NPR was one of the first two news organizations allowed to attend an ISIS trial in Qamishli. With the fall of the last remaining ISIS territory in March, thousands of accused fighters, including 1,200 non-Iraqi foreigners, are now in Kurdish Syrian custody in Rojava.

At Amir's trial, a prosecutor summarizes the evidence, saying Amir had served as an aide to an Iraqi ISIS leader whose nom de guerre was Abu Faisal al-Iraqi. A former stonemason, Amir fought in the Syrian region of Deir ez-Zor.

Judge Amina, who wants to be identified only by a first name for security reasons, asks Amir to confirm the information. He does so in a calm voice, appearing unafraid.

She asks him details about when he joined ISIS, how much money he made, why he surrendered to Kurdish-Syrian forces and whether he requests anything from the court.

"I want you to ask my family to hire a defense lawyer for me," he tells her.

"I am talking to you — raise your head"

Amina's courtroom — one of three in Rojava handling ISIS trials — is a converted office in a former Syrian government agriculture ministry building. Each judicial panel consists of three judges. In line with Rojava's emphasis on gender equality, female and male judges sit on each panel.

On this day, presiding over Amir's trial, Amina is wearing a white shirt and jeans with embroidered butterflies — clothing ISIS would have whipped women for wearing in public. She is seated behind a wood and faux-leather desk, which hides her platform heels. The public prosecutor is wearing a short-sleeved shirt.

In the future, Amina says, perhaps they will have judge's gowns and proper courtrooms where journalists and the public can come all the time.

It's a shock to some ISIS fighters to be sentenced by a woman. In the self-declared caliphate, women had very restricted roles, requiring them to stay at home unless they were accompanied by a close male relative. According to ISIS ideology, men are not allowed to look at women who are not direct relatives.

"Some of them, when they hear the voice of a woman, they look at the ground," says Amina. "I tell them, 'I am talking to you — raise your head and look at the committee.'"

Amina says a female colleague jokes that ISIS fighters thought that, as the Quran promises men who are faithful, they would end up in paradise with dozens of beautiful women to accompany them. "Instead, they look up and see us" in the courtroom, Amina says with a laugh.

The 47-year-old judge studied law in Aleppo and practiced law in the Syrian judicial system before the country's civil war began in 2011. She and other lawyers helped establish a legal system governed by Rojava's secular, socialist-influenced constitution. The region's legal system incorporates Syrian civil law, but emphasizes guarantees for women's rights and, through "peoples' courts," focuses on conflict resolution rather than punishment.

When the Kurdish-led administration created its justice system in Rojava, it set up appeals courts, enlisted defense lawyers and abolished the death penalty. The maximum punishment Amir faces will be 20 years in prison. Amina tells NPR that if ISIS leader Abu Bakr al-Baghdadi were ever found and tried here, he would be eligible for exactly the same sentence, in the hope he would be rehabilitated.

"Revenge is for the weak," says a lawyer named Khaled who, along with Amina, heads the Kurdish Syrian administration committee overseeing ISIS trials. Because judges and lawyers in Rojava receive regular death threats, he asked that NPR not use his surname.

Torture is prohibited in the Rojava justice system, Amina says, and prison guards are disciplined for any action perceived as humiliating to prisoners. It's difficult to confirm whether the justice system lives up to those ideals.

Amina is cut off from her own family members in Afrin, a Kurdish Syrian region seized last year by Turkish forces. In Qamishli, after trying cases, she goes home at night and researches international law as part of a project to further refine Rojava's legal system.

The foreigners who aren't allowed home

At its height five years ago, ISIS ruled one-third of Iraq and parts of Syria. At least 30,000 foreigners from almost every country in the world flocked to Syria to fight for and live in the caliphate. Many of the fighters were killed.

Of the more than 1,200 non-Iraqi foreign fighters now held in Syria, many are from Europe and North Africa. Most governments have refused to take back their citizens to be put on trial in their home countries, fearing that crimes committed in Iraq and Syria cannot be successfully prosecuted at home.

Some, like Britain, have even stripped the citizenship of their nationals who joined ISIS, leaving them in the custody of overwhelmed Kurdish Syrian security forces.

On Sunday, Iraq sentenced to death six of at least a dozen accused French fighters who had been extradited by Kurdish Syrian forces.

The French citizens joined ISIS in Syria, but are accused of also committing crimes in Iraq. U.S.-led forces in northeastern Syria are believed to have carried out the transfer. France bans the death penalty at home but says it recognizes the jurisdiction of Iraqi courts.

One of the French fighters, identified as Kevin Gonot, told the Iraqi court that he had also been sentenced in absentia in France to nine years in prison for joining a terrorist organization. The Iraqi court sentenced him to hang.

Another French fighter told the judge he had been tortured into a confession and displayed scars on his shoulders and back.

"One group was handed to them, but unfortunately the Iraqi government executed them," she says. "We denounced it and we stopped the extraditions."

Obstacles to an international tribunal

Authorities in Rojava have asked for an international war crimes tribunal to be set up within its boundaries, to handle trials of ISIS fighters accused of the most serious crimes. They say ISIS is an international problem and believe the countries international fighters came from need to be part of the justice system.

Sweden is discussing with European allies a tribunal to be based in Iraq.

But if an international war crimes tribunal is formed to handle ISIS cases, there will be significant obstacles to basing it in Rojava.

With the withdrawal of U.S. troops from Syria, retaking of rebel- and militant-held territory by Syrian forces and opposition to Kurdish self-government by neighboring Turkey, the Kurds in Rojava would be forced to reach an accommodation with the Syrian government they fought against before they broke away in 2012.

Syrian Kurds say they are not aiming to establish an independent state but want to preserve some autonomy in a federal Syrian system. So far, though, there have been no substantive talks with the Syrian government over the region's status.

There are few countries willing to give the Kurdish self-administration legitimacy by endorsing an international tribunal. Some countries have concerns over its leading political party's ties to the PKK, a Kurdish Turkish group considered a terrorist organization by the U.S. and some European countries.

"We know that establishing an international court is a difficult demand, but we have other options," says Khaled, the lawyer. "For example, one of our demands is to have a joint court between us and the coalition forces." That too would face significant obstacles because of the Rojava administration's lack of legal status.

Kurdish Syrian forces fought with the U.S. to defeat ISIS in Syria, with a loss of 11,000 anti-ISIS fighters, most of them Kurdish. Even so, that has not translated into international political support for the region.

"We are doing our duty"

"We don't have forensic labs or forensic medicine, we can't do fingerprints or analyze DNA. We have very basic capabilities," says Amina.

There is no prison for women convicted of terrorism, so several Syrian women found to have worked within ISIS, including as enforcers, were released, Amina says.

Amina says most of the accused who appear in court were captured on the battlefield, as they were fighting. And most of them confess. They often have incriminating photos or video on their phones.

One of the judges showed NPR a video that helped convict a Syrian fighter. It shows the fighter dressed in military fatigues, with a long beard, shouting "God is greater" in Arabic. Then he shoots a kneeling man in the head.

Bringing criminals like this to justice is a key part of transitioning to peace, Amina says, though it comes at personal risk.

"We got used to a state of war," Amina says. "In Afrin, we got used to the sound of F-16s, Cobra helicopters, the sound of artillery shells. We live our lives without protection. It's risky, but we are doing our duty by trying these terrorists."