Accessibility links
Steve Bannon Stars In Michael Wolff's New Trump Tell-All With Supporting Cast Of No-Names The Fire and Fury author offers surprising stories about the president. But there may never have been a more polarizing president, nor an author less likely to be read as a neutral recorder of facts. 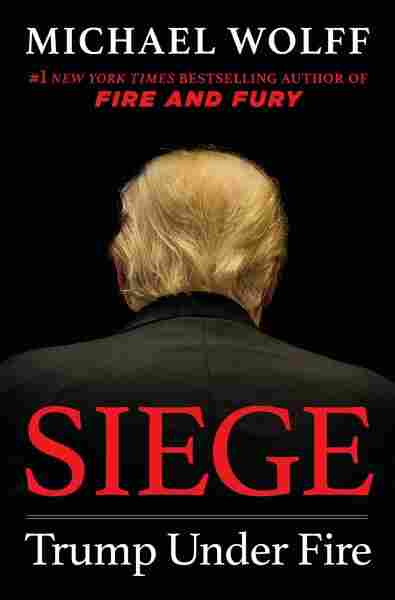 Michael Wolff's new book about President Trump, Siege: Trump Under Fire, offers many surprising stories — but its power to shock may be limited.

Most Americans have long since decided what they think of Trump. And most people who pay attention to such books have made up their minds about Wolff, as well.

There may never have been a more polarizing president, nor an author less likely to be read as a neutral recorder of facts. This is regrettable, because much of Wolff's gossipy but disturbing tale is not only plausible but credibly corroborated elsewhere. Siege includes events widely observed, or present in accessible public records. Yet all of that material has been conjoined with so much else that cannot be confirmed that the reader is apt to be left in doubt.

Wolff is a longtime writer for popular magazines who scored a hit with Fire and Fury, his earlier account of Trump's first seven months in office. The first book, a runaway 2018 bestseller, was based partly on personal observation from weeks spent inside the White House. But in this sequel, Wolff relies primarily on interviews with current and former intimates of the president. Nearly all are unnamed, with the egregious exception of the book's mainspring source, former campaign manager Steve Bannon, of whom more in a moment.

An author's credibility is everything in this kind of journalism, whether one is known primarily for entertainment reporting or for winning multiple Pulitzer prizes. And that is problematic for Wolff, because in this case the single most newsworthy item in the 315 pages of Siege has already been called into question.

In his chapter on Special Counsel Robert Mueller and the probe of Russian interference in the 2016 election, Wolff says there was a draft version of a three-count criminal indictment against President Donald Trump as early as March 2018. He says the three charges (under Title 18 of the federal code Sections 1505, 1512 and 1513) did not stem from the Russian interference itself but from Trump's efforts to thwart the investigation.

Wolff links this draft to Mueller's deputy Andrew Weissmann and reports that Mueller let it languish for nearly a year while preparing his own report, ultimately deferring to a longstanding Justice Department policy that a president could not be indicted while in office. Wolff says he got a look at the draft, and other related memoranda regarding that no-indictment policy, from "a source close to the Office of Special Counsel."

But the Office of Special Counsel on May 28 released a statement denying that account. "The documents you describe do not exist," said Peter Carr, responding to questions from The Guardian and other media organizations.

We can now expect the initial response to Siege to focus on this issue — and for the president and his defenders to say the rebuff from Mueller's team debunks the book more or less in its entirety.

Much of the other controversy likely to greet the publication of Siege will concern things Trump is quoted as saying, often in late-night phone calls to his coterie of personal friends (most of whom seem to be New York business associates). Wolff would have us believe at least some of these midnight confidants have shared descriptions of Trump's sexual boasting, as well as his harsh assessments of rivals and critics and even of his own appointees and family members.

Plausible? Believable? Perhaps, but the prejudice of the reader is not a substitute for evidence. If we do not know who supposedly told Wolff these things, we cannot even begin to assess whether Trump in fact said them.

Wolff also claims that his own "certain knowledge that in the end [Trump] will destroy himself" is a view shared by "almost everyone who has encountered him since he was elected president." The inclusion of "almost" scarcely rescues this assertion from obvious overstatement.

Wolff also quotes an unnamed White House staffer "who has spent almost countless hours with the president" saying "I have never met anyone crazier than Donald Trump." Wolff says he has heard something similar from "a dozen others with firsthand experience."

These group attributions may carry the added weight of numbers, but they suffer from the same essential lack of verifiability.

Wolff does have one source on the record. Again and again. From chapter to chapter, almost page to page, we see the words of Steve Bannon, a former Trump campaign manager and then White House "chief strategist" for seven months. He later broke with Trump in the furor over Fire and Fury.

The former chairman of the website Breitbart, Bannon has never quite left the world of "alt-right" media and movement politics. He has remained an active campaigner and adviser to nationalist and populist groups in Europe and elsewhere and worked for various Republican candidates in 2018.

He also seems to have spent much of 2018 talking to Wolff, in whose new book he seems to be perched over the author's shoulder like Edgar Allan Poe's raven, squawking caustic remarks. In one moment, Wolff says Trump's businesses had "increasingly seemed to resemble a semi-criminal enterprise" and then has Bannon chuckling: "I think we can drop the 'semi' part." At times, Bannon quite nearly takes over the narrative, as when Wolff lets one Bannon quote run without interruption for five pages.

In truth, Bannon's idiosyncratic view of the world and raw language provide much of the color and punch in this book. But his vocabulary of imperatives and superlatives grows wearisome, like a sportscaster declaring each dramatic moment the turning point of the game. Bannon is always declaring one crisis or another — the budget, the wall, the midterms, the Brett Kavanaugh nomination to the Supreme Court — to be the crux of the entire Trump presidency.

We have now seen nearly a dozen insider tell-alls emerge from Trumpworld, some by staffers such as Cliff Sims and Omarosa Manigault Newman and others by seasoned journalists such as Bob Woodward of the Washington Post. Two former heads of the FBI have penned critical memoirs that made the best-seller list. It can be said that each of these adds something to the mosaic, extending the tale of White House infighting and chaos a bit further into history. In this sense, they will be read, at least by many, as corroboration for each other.

So by now we may find it easy to believe that McGahn was "deeply depressed" by the time he left the White House, or that he had a "black hatred" for Trump, as Wolff writes — even if we have this only from "a friend." At times, even Wolff casts doubt on something he is reporting — such as Trump's claim to having had a sexual encounter with Nikki Haley, his first appointee as Ambassador to the United Nations. Wolff suggests he doesn't believe this happened, but he stands by reporting that "multiple associates" of the president told the author he had bragged about it.

Wolff is not a policy maven, nor does he dwell on the deeper and even global political issues Trump represents — the rise of populist nationalism and the turn toward autocracy. Wolff's subject is the president as a personality, and the people in his immediate circle who observe that personality.

And so it may seem quite natural for Wolff to rely on blind sourcing for his text. How else can a writer with an eye on book sales get some of the really good stuff on paper if he doesn't let folks dish anonymously? How else to get little anecdotes such as the one about Senate Majority Leader Mitch McConnell and his wife, Transportation Secretary Elaine Chao, entertaining friends with their impressions of the president. Or the one about the time the president came into the Oval Office in such a "full-on rage" that "his hair came undone [and] there stood an almost entirely bald Donald Trump."

Among the head-shaking impressions from Siege is that of extraordinary events following on each other in such rapid succession that they quickly recede in memory. Was it really less than a year ago that Melania went to a military hospital in D.C. for "a benign kidney ailment," staying there for days and out of the public eye for weeks?

Was it really just last fall that the president refused to punish Saudi Arabia for the murder of journalist (and Virginia resident) Jamal Khashoggi? Or that Haley abruptly informed the White House she was leaving after less than two years at the U.N.?

Was it just last July that Trump went to Helsinki and held a two-hour meeting with Russian President Vladimir Putin with no other American official in the room, emerging later to say he accepted Putin's denials of Russian interference in the 2016 election?

Was it just last Christmas that Defense Secretary James Mattis resigned in dismay at the president tweeting a decision to withdraw all U.S. forces from Syria immediately? And the government shut down for five weeks because the president did not like the Twitter and talk show treatment of his budget deal with his own party's congressional leaders?

Wolff has pulled these and other cases from the file drawer, one by one, waving them overhead like a courtroom lawyer summing up for the jury.

In this case, it is likely the jury has already made up its mind. Most of those who read this book will already believe terrible things about Trump. There will be those too who dismiss the book in its entirety as a compendium of illegitimate charges — as prejudiced as they are unproven.

But if nothing else, Wolff has performed a kind of service in Siege by taking us back over this rocky ground and reminding us what a long strange trip it has already been.