Accessibility links
Review: 'Good Omens' - What If The Apocalypse Were British? Terry Pratchett and Neil Gaiman's 1990 novel about an angel and demon striving to prevent the end of the world becomes a charming, very British series that turns the apocalypse into a spot of bother. 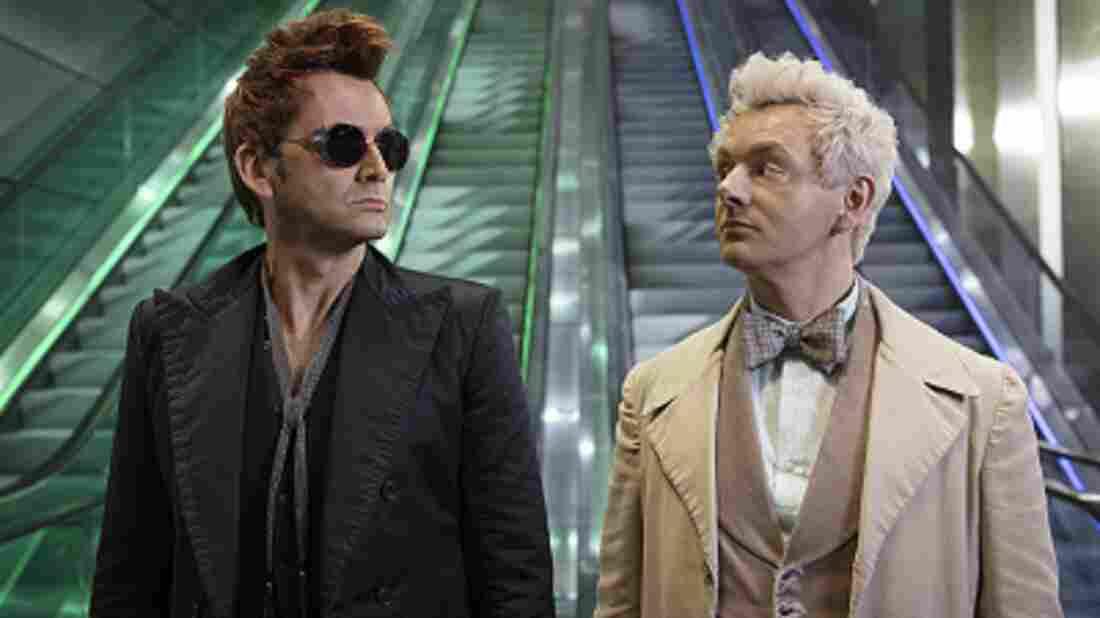 Dancing on the Escalator of Life (on the head of pin): The demon Crowley (David Tennant) and the angel Aziraphale (Michael Sheen) conspire to stave off the end of the world in Good Omens. Amazon Prime hide caption 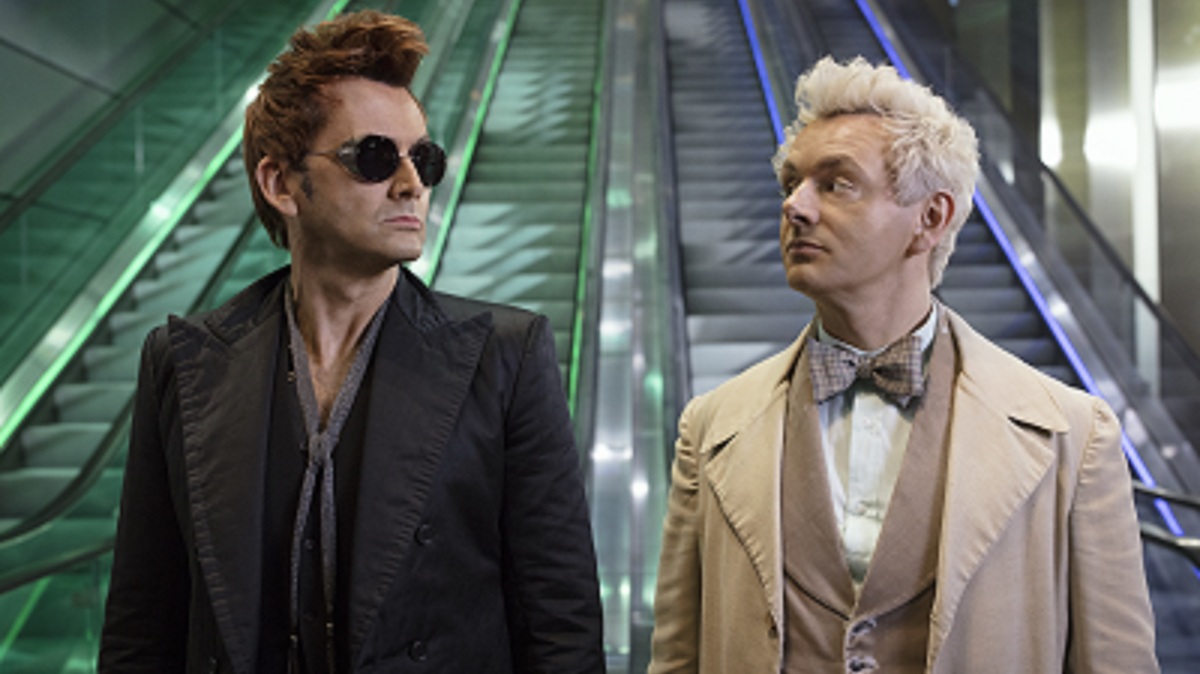 Dancing on the Escalator of Life (on the head of pin): The demon Crowley (David Tennant) and the angel Aziraphale (Michael Sheen) conspire to stave off the end of the world in Good Omens.

Most of the cleverest, funniest bits in Amazon's six-episode series Good Omens, which debuts on May 31, come straight from the 1990 novel by Terry Pratchett and Neil Gaiman, as you might expect.

The plot, about a demon named Crowley (David Tennant), who originally tempted Eve in the Garden of Eden, and an angel named Aziraphale (Michael Sheen), whose original gig was guarding the Garden's East Gate with a flaming sword, is wholly intact: The two eternal beings' extended tenure on Earth has engendered in them a fondness for the place and its people, so when they are instructed that the apocalypse has arrived, they conspire to stop it.

The elaborate mix-up involving an order of satanic nuns that results in the baby Antichrist getting mislaid — that's also straight from the book.

Ditto the notion that the Four Horsemen of the Apocalypse have been biding their time on Earth until they get their marching orders — er, riding orders. The detail that in the meantime one of the four — Pestilence — retired once penicillin was discovered, only to be replaced in the lineup by Pollution (Lourdes Faberes) seems to be one of the book's, and the show's, particularly Gaiman-esque touches.

In a more fundamental sense, however, the thing that sets Good Omens — book and show — apart from the fire hose of grim apocalyptic fare we're getting doused with on a daily basis is its thorough, inveterate, consummate Britishness.

(I was going to add "unapologetic," there, but "unapologetically British" feels like a contradiction in terms, surely.)

You're unlikely to find an Armageddon as warm and cozy as the one outlined in the novel; think Mad Max: Fury Road, if the Charlize Theron role had instead gone to Miss Marple — that's the all-important vibe the show has to nail, and it does.

I mentioned above that most of the cleverest bits in the Amazon series come straight from the book, but the series does stake out its own patches of humorous real estate. The angel Gabriel rates only a mention or two in the novel; here, as played with a kind of tetchily impatient smarm by Jon Hamm, he's the ultimate slick, condescending corporate boss — which is to say: As seen through the eyes of a Brit, he's everything that is quintessentially American.

Largely though, the series makes the novel come alive through its (mostly) unerring casting choices, which double down on that crucial Britishness. Brief cameos by Derek Jacobi (as the Metatron), Josie Lawrence (as a witch whose prophecies figure largely in the plot), Miranda Richardson (as a psychic who doesn't get much to do until the final episode), Brian Cox (as the voice of Death) and Benedict Freaking Cumberbatch (as never mind who, it's a surprise) make the whole thing go down like a fresh cup of inordinately milky tea.

But it's Tennant and Sheen in the two lead roles who really dig in and unearth the foundational Britishness the story requires, by planting their feet at either end of the spectrum of national identities popularly associated with the United Kingdom.

Tennant's Crowley is Bill Nighy by way of Keith Richards — a louche, lanky figure who never walks when he could drunkenly saunter. Tennant is having a ball, here, and manages to make Crowley a hugely expressive presence despite having to emote from behind pitch-black sunglasses and (sometimes) a wig of flowing, devil-red locks. Sheen, on the other hand, is serving you fusty, fussy and flustered in a classic morning coat, waistcoat and pocket watch ensemble — E.M. Forster meets Wind in the Willows' Badger. The friendship that develops between the two beings is, of course, Good Omens' true subject, and both actors chart its progress in different ways. Tennant is all bluff insouciance that slowly erodes to reveal the affection beneath it; Sheen's nervous, feckless worrying eventually abrades into defiant resolve. A cursory overview of the plot would suggest that the two decide to work together to defend humanity from divine caprice — but the performances make it clear that what each entity is truly fighting for is one another and for the bond they've forged.

Not that they would come out and say so, of course, because: British.

One last bit of genius casting: Frances McDormand plays the Voice of God, which, in terms of this critic's ability to cultivate and maintain a dispassionate critical distance in the evaluation of the work at hand, just seems like cheating, frankly.

Quibbles? Sure — the subplot involving young Antichrist Adam (Sam Taylor Buck) and his pals never quite comes together as deftly as the Tennant-Sheen business does. The kids are perfectly fine, but the script demands a bit more from them than they manage to deliver. Similarly, the jokes in a story thread involving witches and witchfinders never land as hard or as cleanly as they could — perhaps it's just that their comparatively slower comic timing suffers in comparison with that of Tennant and Sheen, which is understandable.

In closing, I'll note that series involves a substantial amount of special effects, on which all that Amazon money gets put to solid use. This is a particularly gratifying turn of events to those of us who spent years watching David Tennant anchor another high-concept British television series Whose cosmic narrative reach consistently exceeded its digital-effects budget's grasp.