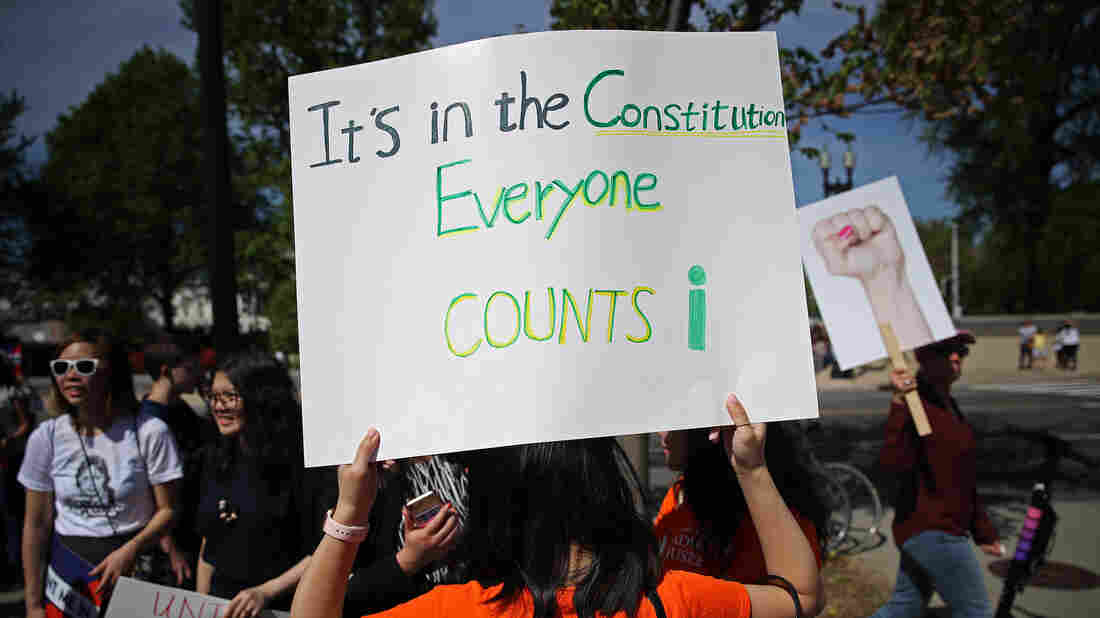 Protesters gather outside the U.S. Supreme Court in April as the justices hear oral arguments over the citizenship question the Trump administration wants to add to the 2020 census. Win McNamee/Getty Images hide caption 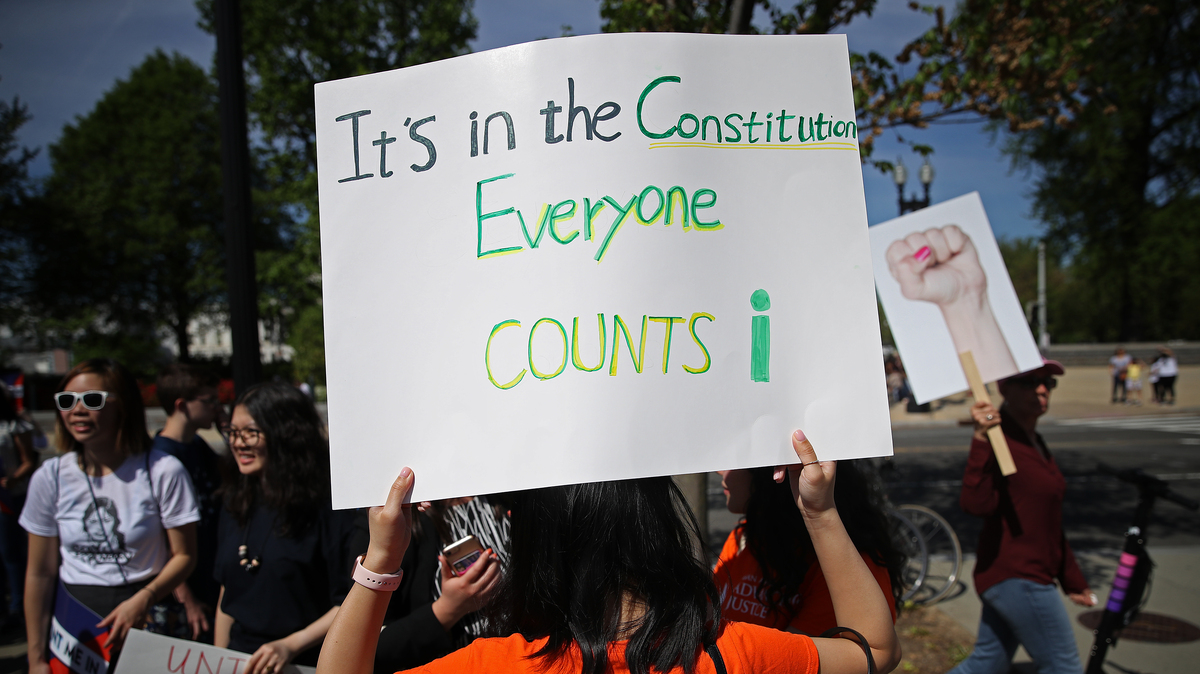 Protesters gather outside the U.S. Supreme Court in April as the justices hear oral arguments over the citizenship question the Trump administration wants to add to the 2020 census.

A major Republican redistricting strategist played a role in the Trump administration's push to get a citizenship question on forms for the 2020 census.

Thomas Hofeller, who died last August, concluded in a 2015 report that adding the question would produce the data needed to redraw political maps that would be "advantageous to Republicans and Non-Hispanic Whites," according to a court filing released Thursday.

Plaintiffs in one of the New York-based lawsuits over the question say that Hofeller later ghostwrote an early draft of the administration's request for the question and helped form a reason for adding the question to forms for the national head count.

The Trump administration has maintained it wants census responses to the question — "Is this person a citizen of the United States?" — to better enforce Voting Rights Act protections for racial and language minorities.

But Hofeller's documents uncovered through a separate lawsuit suggest administration officials were aware that including the question "would not benefit Latino voters, but rather would facilitate significantly reducing their political power," argue attorneys with the law firm Arnold & Porter, the ACLU and the New York Civil Liberties Union in a letter to U.S. District Judge Jesse Furman.

The revelations come weeks before the Supreme Court is expected to issue a major ruling on whether the Trump administration can add the citizenship question to the 2020 census. A total of seven lawsuits have been filed around the country against the administration's plans for the question, which are currently blocked by orders from three federal judges at lower courts.

If the question is included on the census, Census Bureau research shows it is highly likely to scare households with noncitizens, especially within the Latinx and immigrant communities, from taking part in the constitutionally mandated headcount of every person living in the U.S.

In their letter to Furman, the plaintiffs' attorneys also say that Hofeller's role was kept hidden by Justice Department official John Gore and an adviser on census issues to Commerce Secretary Wilbur Ross.

Ross oversees the Census Bureau and approved adding the question. Both Gore and the adviser, A. Mark Neuman, sat for questioning under oath last year for the citizenship question lawsuits. Gore, however, only recently disclosed as part of a congressional investigation by the House Committee on Oversight and Reform that Neuman provided an early draft of the Justice Department's letter requesting the question.

That draft letter includes a paragraph about using the Voting Rights Act to justify the question. It matches word for word a paragraph found in a document among Hofeller's files. The plaintiffs' attorneys say that shows Hofeller ghostwrote a portion of the draft letter.

The attorneys argue that the newly revealed evidence contradicts Gore's and Neuman's sworn testimony for the lawsuits and have asked Furman to consider issuing sanctions or other penalties.

"That study played no role in the Department's December 2017 request to reinstate a citizenship question to the 2020 decennial census," the spokesperson said. "These unfounded allegations are an unfortunate last-ditch effort to derail the Supreme Court's consideration of this case."

After reading the attorneys' letter, Neuman said that he "gave comprehensive and truthful testimony."

"My mother immigrated to this country from Central America," Neuman said in a written statement. "Any inference that I would advocate actions that would harm the interests of the Latino community is wrong and offensive to me."

Furman has scheduled a hearing on June 5 at the U.S. District Court in Manhattan to discuss the request by the plaintiffs' attorneys.

Hofeller's documents were initially obtained through his daughter, who provided them to Common Cause as part of the government watchdog group's lawsuit in North Carolina state court. The group is challenging gerrymandered state legislative maps that Hofeller helped draw. Attorneys with Arnold & Porter — the law firm involved with one of the citizenship question lawsuits — are representing Common Cause.

Before his death, Hofeller appeared to predict the legal battle that ensued after Ross announced his decision to add the citizenship question. In his 2015 study commissioned by The Washington Free Beacon, a conservative news outlet, he wrote that using census responses to a citizenship question for redistricting "can be expected to provoke a high degree of resistance from Democrats and the major minority groups in the nation."

"The chances of a U.S. Supreme Court's mandate to add a citizenship question to the 2020 Decennial Census are not high," he wrote.