Accessibility links
Team Behind Privately Funded Border Wall Reveals Project Near Completion We Build the Wall, a nonprofit organization funding construction of a section of border wall near Sunland Park, N.M., said Thursday that it has 10 other sites picked out for more wall construction. 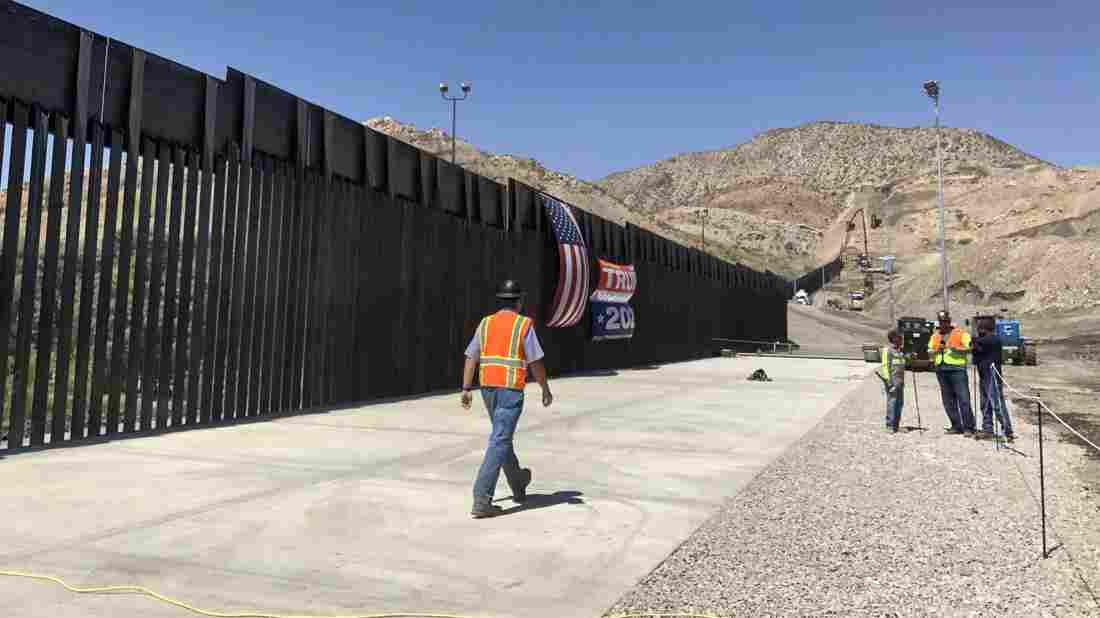 Construction is nearly complete in New Mexico on a section of border wall built with private funds raised by a nonprofit called We Build The Wall. Mallory Falk/KRWG hide caption 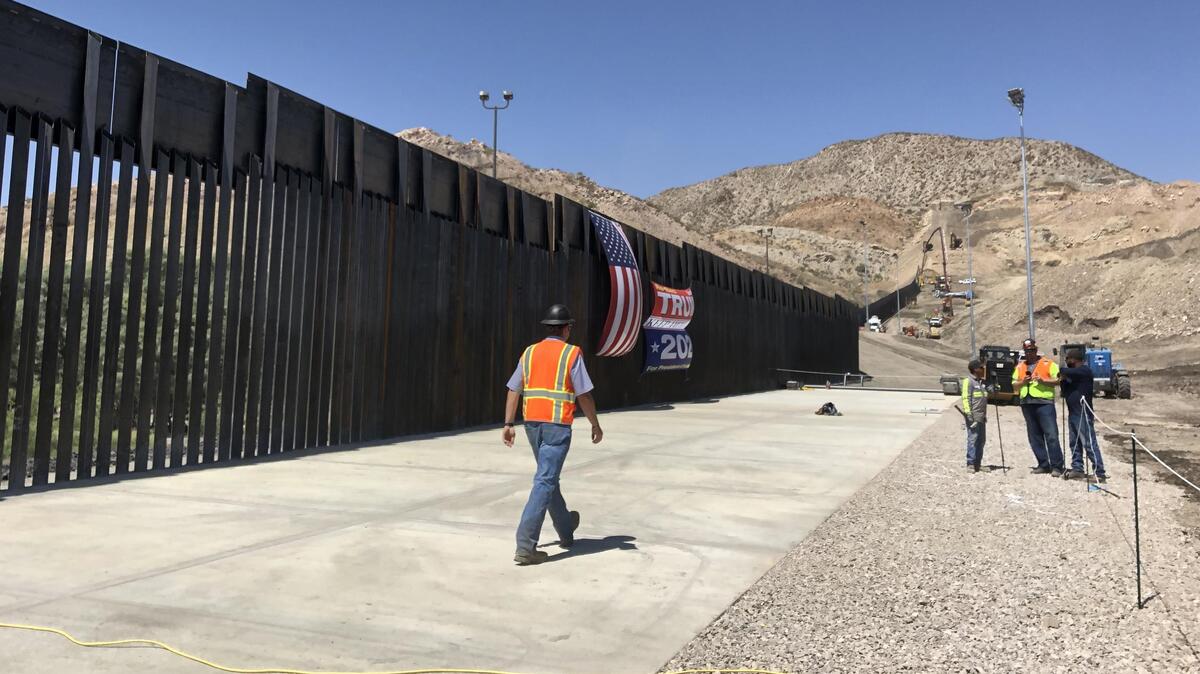 Construction is nearly complete in New Mexico on a section of border wall built with private funds raised by a nonprofit called We Build The Wall.

Initial sections of fencing for a privately funded border wall were installed last weekend in Sunland Park, N.M., as the result of a crowdfunding effort that went live in December.

On Thursday, the leaders of the project showed off the nearly completed section of wall, running across rough terrain next to where the official border barrier ends. Project leaders said they have mapped out at least 10 other spots along the border where they could build more wall.

President Trump has repeatedly tried to win funding for the construction of a border wall, which was a centerpiece of his 2016 presidential campaign. But he has faced opposition by Congress and by the courts. Recently, a judge in California temporarily blocked the administration from using funds not appropriated by Congress to build a wall.

U.S. Air Force veteran and We Build the Wall founder Brian Kolfage told reporters that the construction site on private land in Sunland Park was chosen two months ago after he and other project leaders heard complaints of theft and other security issues from residents in the area. 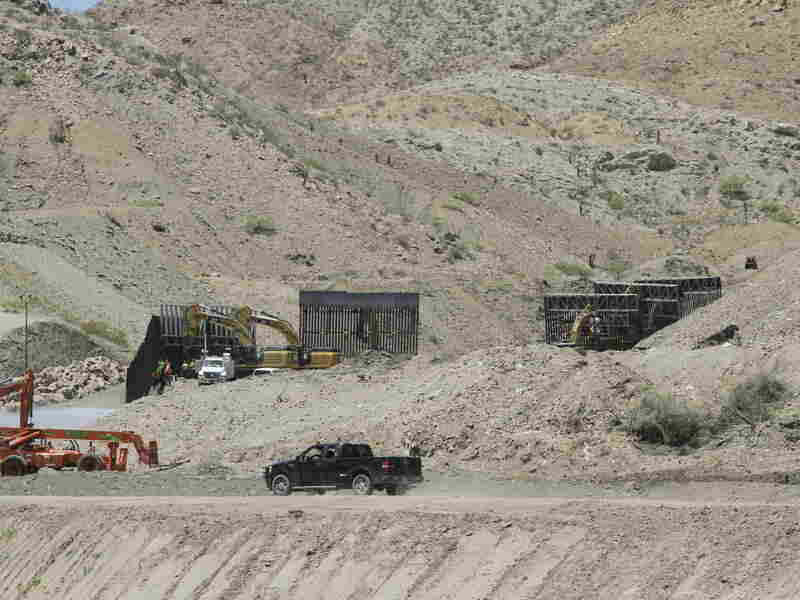 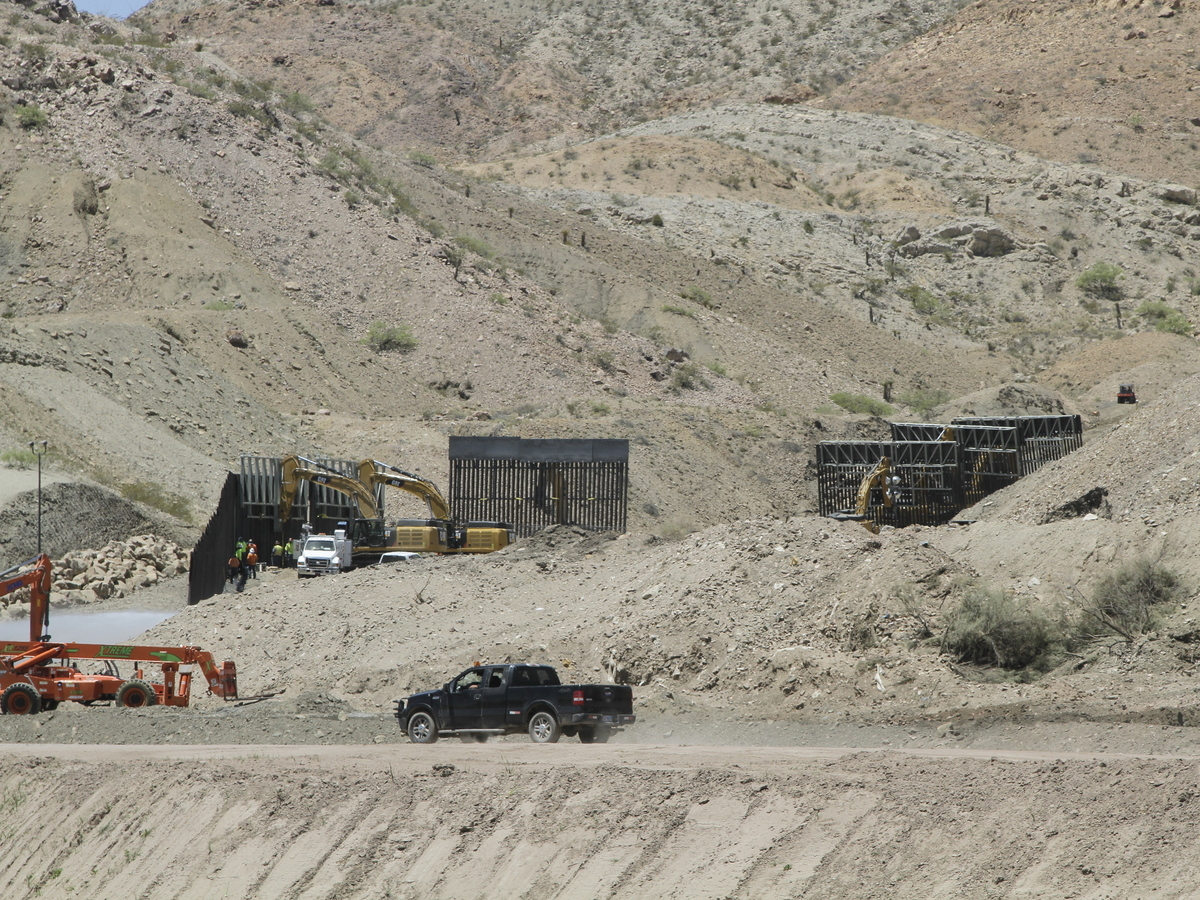 Photos and videos of the privately funded border wall were released over Memorial Day weekend.

Sunland Park Mayor Javier Perea issued a cease-and-desist order earlier this week for the wall construction, citing a lack of permits. "I mean this is an issue that was railroaded into the city of Sunland Park," he explained. "And it takes time for us to review documents and ensure that everything's in compliance."

Both Kolfage and former Kansas Secretary of State Kris Kobach — an immigration hard-liner who serves as general counsel to the group — argued they had filed the correct paperwork and had briefed the necessary authorities on their plans.

We do have agility, and speed and determination, and that's what I hope you see on display when you look at this wall.

The city has since approved construction of the wall to resume.

Miles and miles of wall

The contractor building this section of wall is Fisher Industries of North Dakota. According to The Washington Post, Fisher Industries is a favorite of Trump and he has urged the Army Corps of Engineers to consider the company for a contract to build the wall.

At Thursday's press event, Fisher Industries President Don Fisher seemed to be pitching his company for future wall construction projects. "Fifteen-hundred people from the Fisher Industries team stood up and [were] so proud and honored for We Build the Wall to give us a shot to do this," he said. "We have the ability to build in the multibillions and build miles and miles and miles."

Still, some local politicians were unhappy with all the outside attention. In addition to Kobach serving as general counsel to the We Build the Wall group, former presidential adviser Steve Bannon is the chairman of the group's advisory board.

"It's deeply disturbing when outsiders, like Kris Kobach and Steve Bannon, come in and use our community and people as a backdrop to further their racist agenda," U.S. Rep. Veronica Escobar, a Democrat representing nearby El Paso, Texas, told the Silver City Sun News.

According to Kobach, the steel wall extends for a half-mile. He praised how rapidly the project came together and said that, despite the short-term setback over permitting, the wall is now virtually complete.

"It shows how quickly a private organization can identify the problem, take the steps necessary to mobilize resources and get to the site, and then complete the project," Kobach said. 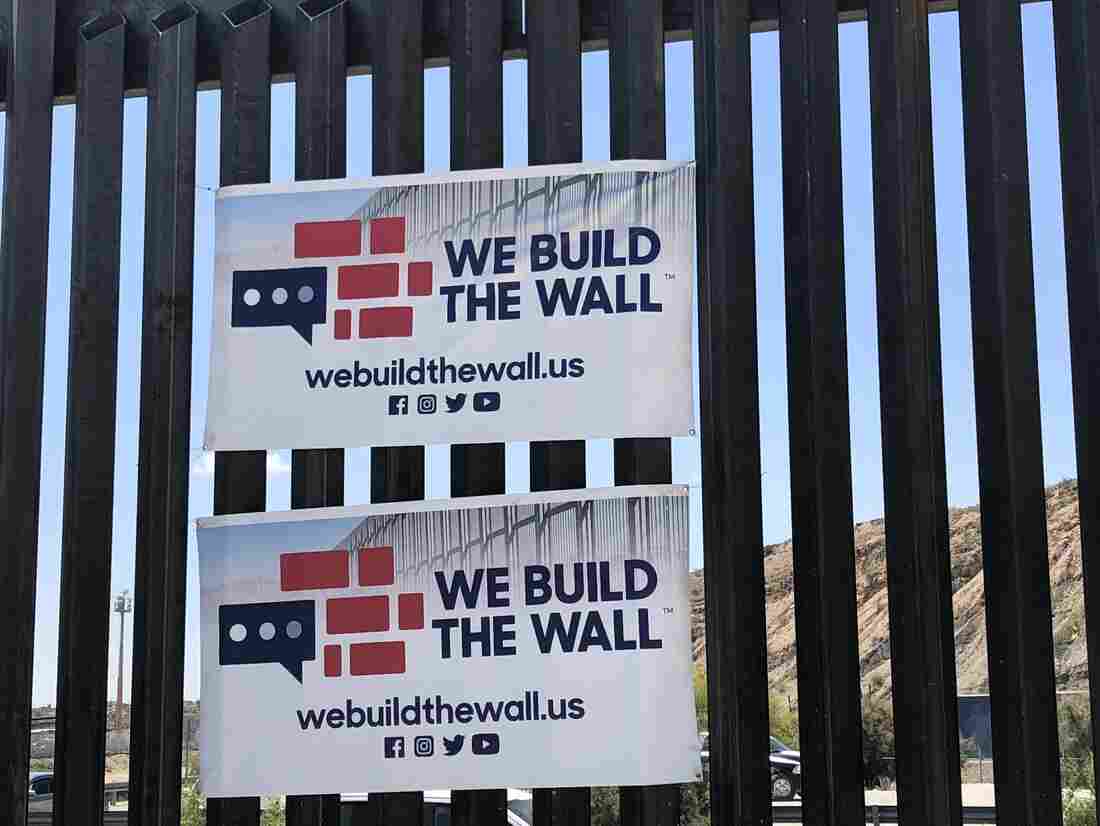 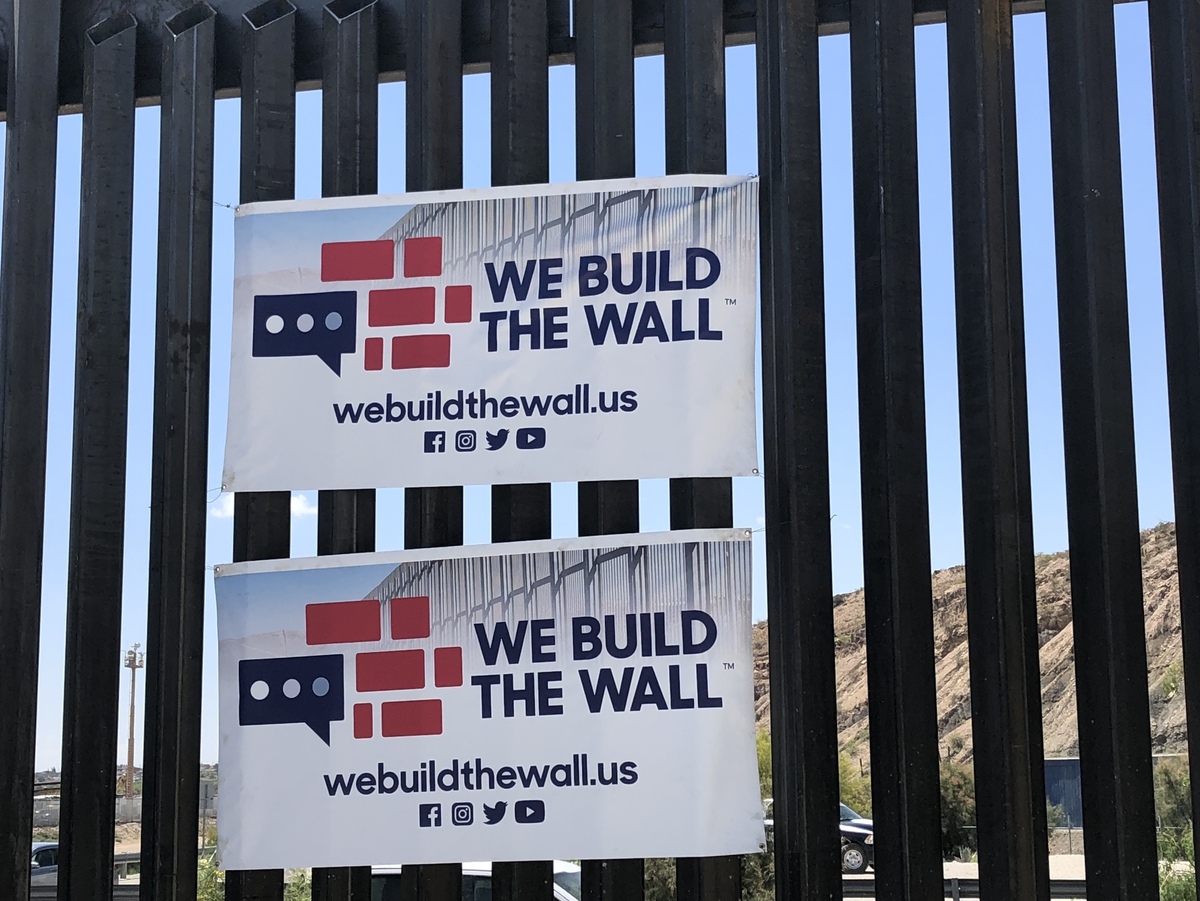 We Build The Wall says it has raised $23 million thus far for border wall construction.

Kobach added that We Build the Wall aims to supplement the government's efforts to secure the border by filling in gaps in the existing wall. He said he was satisfied with the project's results without governmental resources.

"We do have agility and speed and determination, and that's what I hope you see on display when you look at this wall," Kobach said.

Kolfage said that the new wall has already deterred immigrants from crossing the border illegally and that it will relieve some of the duties of Border Patrol agents in the area.

"We can patch one hole, it's gonna leak somewhere else," Kolfage said. "But it starts funneling people toward these other holes. Border Patrol agents no longer have to worry about this hole."

The El Paso sector has seen a huge surge in legal and illegal border crossings in recent months. On one night earlier this week, Customs and Border Protection says it apprehended 1,036 migrants attempting to cross the dry Rio Grande riverbed.

Still, CBP told NPR that this privately funded wall project was completed in an area that was not prioritized for border wall construction. CBP said the wall is not connected with their work and added that the agency will continue to fulfill its standard role in the areas where the private barrier has already been constructed.

We Build the Wall

Kolfage spearheaded an original GoFundMe campaign for the wall in December that received over $20 million in donations from thousands of contributors in its first few weeks. He subsequently created a Florida-based nonprofit called We Build the Wall Inc., which currently raises money to finance the project.

According to the group's website, the campaign's ultimate goal is to raise $1 billion. Kolfage says that could be achieved if all 63 million Trump voters donate $80 to the cause. The site includes a graphic that shows the fundraising campaign's progress, as well as photos and updates from the wall construction in New Mexico.

The amount of donations currently stands at over $23 million, and Kolfage said donations have increased exponentially since photos and videos of the building site were released over the weekend.

A previous Web version of this story incorrectly said the border wall in Sunland, N.M., stands 310 feet tall. The barrier is actually about 18 feet tall and runs along an incline that climbs to 310 feet.