Accessibility links
'I Am A Woman': Track Star Caster Semenya Continues Her Fight To Compete As Female Male and female athletes compete in separate categories because of advantages that come with testosterone. But what should be the rules for women who have naturally high testosterone levels? 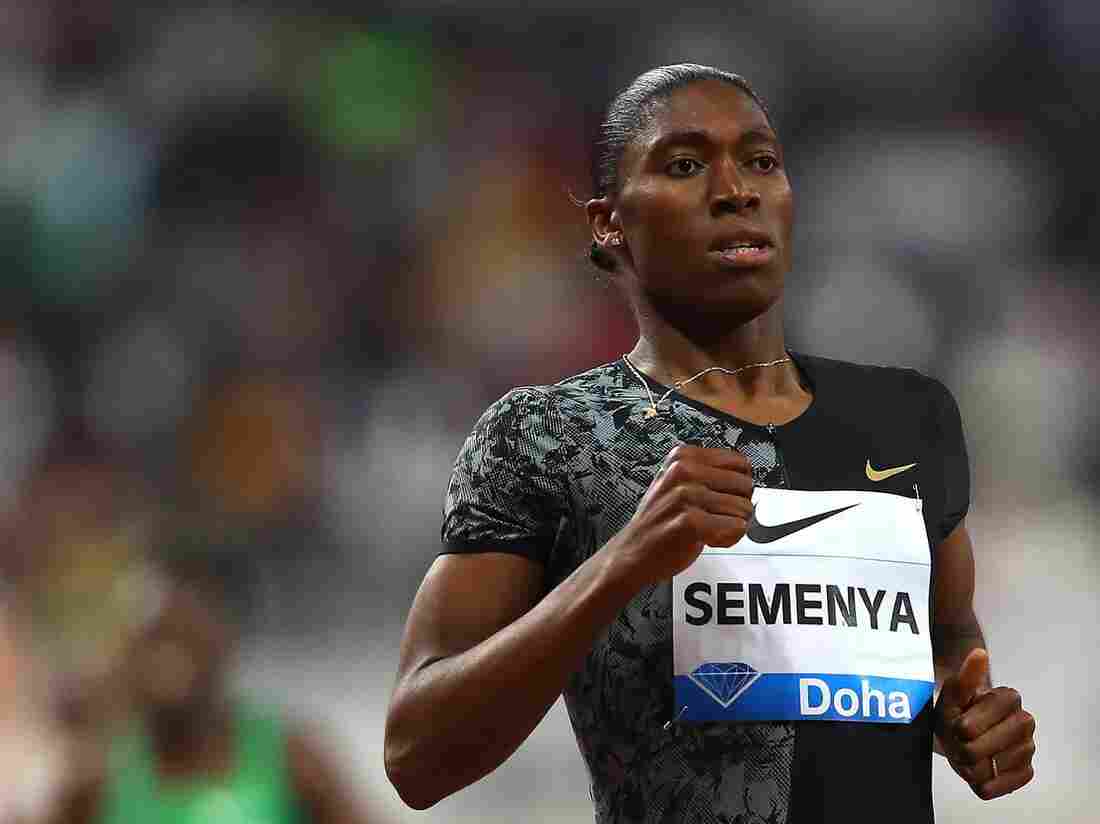 Caster Semenya of South Africa races to the line to win the Women's 800 meters during the IAAF Diamond League event at the Khalifa International Stadium on May 03, 2019 in Doha, Qatar. Semenya has appealed a ruling that requires her to reduce her testosterone levels by drugs or surgery. Francois Nel/Getty Images hide caption 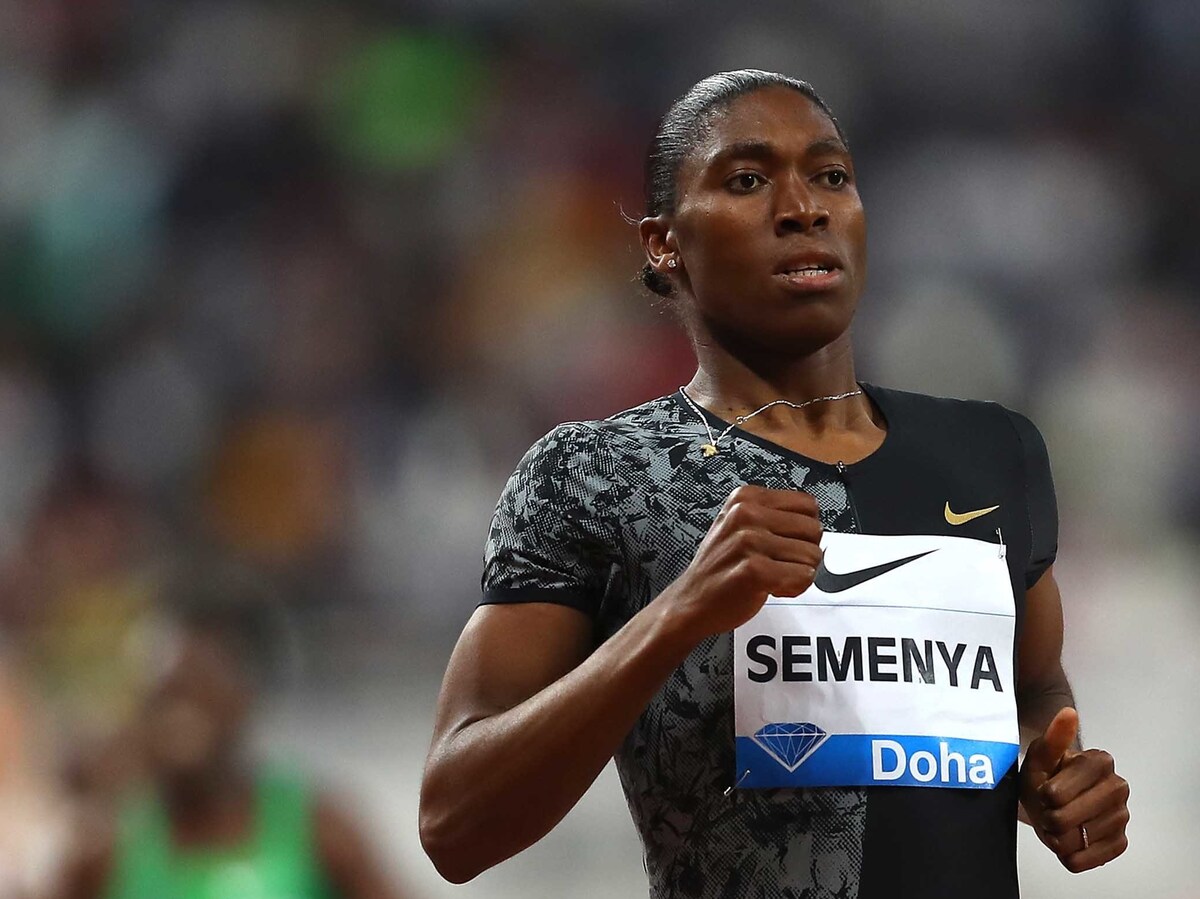 Caster Semenya of South Africa races to the line to win the Women's 800 meters during the IAAF Diamond League event at the Khalifa International Stadium on May 03, 2019 in Doha, Qatar. Semenya has appealed a ruling that requires her to reduce her testosterone levels by drugs or surgery.

This week, the Olympic champion runner Caster Semenya of South Africa filed an appeal in a case that hinges on her right to compete as a woman. It's the latest chapter in a fight that's gone on for years, and that raises thorny questions about fairness and ethics in sport.

Semenya, 28, is a two-time gold medalist in the 800 meter event. She is asking the Swiss Federal Supreme Court to throw out a ruling issued earlier this month by the Court of Arbitration for Sport, or CAS, which is based in Lausanne.

That ruling upheld regulations that will require some female track athletes with naturally-elevated testosterone levels to lower those levels with drugs or surgery, if they want to compete in certain women's events on the international stage.

Just two days after losing that court fight, Semenya took to the track in the Diamond League championships in Doha, Qatar, and blistered past the competition in her marquee event, the 800 meters.

"My word! Is there any end to her talent?" marveled an announcer as he watched Semenya pull away from the pack in the home stretch. "Is this, as some people have suggested, something of an act of defiance, given what's been going on?"

In a statement when she filed her appeal, Semenya said, "I am a woman and I am a world-class athlete. The IAAF will not drug me or stop me from being who I am."

The IAAF is the International Association of Athletics Federations, the international governing body for track and field, which imposed the regulations, arguing that the rules are necessary to create a level playing field in women's events.

In its 2-1 ruling, CAS found that while the regulations are discriminatory, "such discrimination is a necessary, reasonable and proportionate means of achieving the legitimate objective of ensuring fair competition in female athletics."

It's really difficult to support a rule that seems to be based more on a preconceived idea of what a woman should be, rather than who a woman is.

It's not simple to define sex

The IAAF regulations apply to certain athletes with what are known as Differences of Sex Development, or DSDs, which means they were born with anatomy that doesn't neatly fit into the binary, male or female categories. These individuals are also known as intersex.

"People think that it's simple to define sex. It's not," says Dr. Eric Vilain, a geneticist who specializes in the study of sexual development at Children's National Health System and George Washington University in Washington, D.C.

Dr. Vilain, who testified as an expert witness on Caster Semenya's behalf, explains that the biology of sex classification is anything but straightforward; there can be a wide spectrum of variations.

"It's really difficult to support a rule that seems to be based more on a preconceived idea of what a woman should be, rather than who a woman is," he says.

Caster Semenya was raised as a female and is legally female. She's fighting rules that affect DSD athletes who have what are typically male XY chromosomes, who were born with internal testes and who have testosterone levels higher than the typical female range.

Supporters of the rules say higher testosterone gives these athletes an unfair performance advantage, since it provides a boost in power, endurance, and speed.

So, they say, if you want to create a level playing field, the new restrictions make sense.

"Fairness is an extremely subjective word," says Joanna Harper, who researches gender and sport, and testified on behalf of the IAAF. "I prefer the word equitable."

We separate male athletes and female athletes not on the basis of gender identity, or legal sex, or how people are identified at birth, but rather on biological characteristics that make men so much better at sport than women.

Harper says, "We separate male athletes and female athletes not on the basis of gender identity, or legal sex, or how people are identified at birth, but rather on biological characteristics that make men so much better at sport than women."

Harper, author of a forthcoming book entitled Sporting Gender: the History, Science and Stories of Transgender and Intersex Athletes, argues that the rules should not be seen as stripping a female athlete of her identity.

"Whether someone is a woman or someone is a man or perhaps somewhere in between, is a very complicated thing," Harper says. "The separation of athletes into male and female categories is something that I call creating an 'athletic gender.' And it's merely one component of a human being's existence."

Creating a 'protected space' for women to compete

For Duke Law School professor Doriane Coleman, the IAAF rules guarantee a "protected space" for women to compete. Coleman is a former 800 meter runner who studies sex and sport. 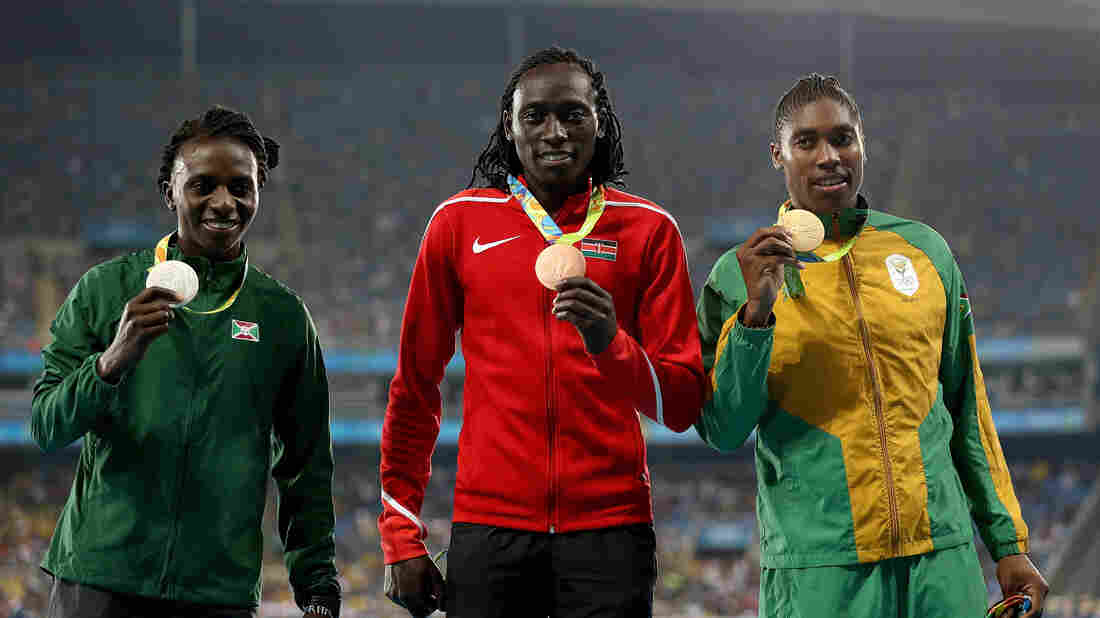 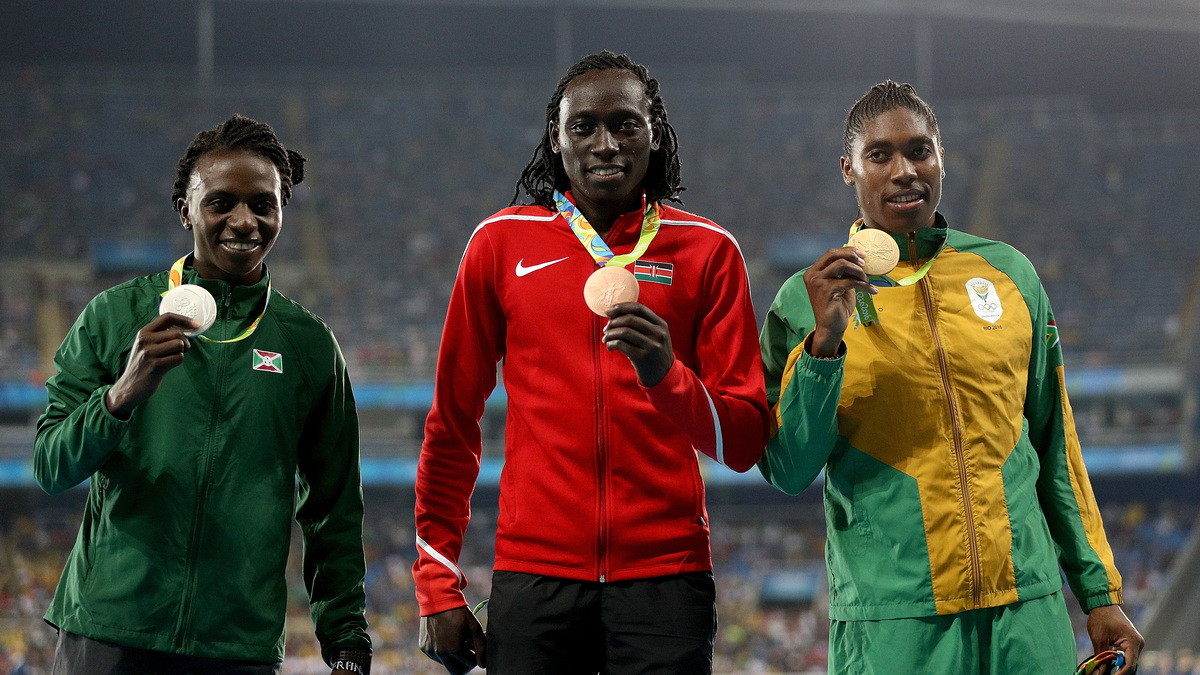 Coleman points to the women's 800 meter final at the 2016 Olympic games in Rio de Janeiro, where all three podium spots were won by women who say they will be affected by the new rules on DSD athletes: Caster Semenya, who took gold; Francine Niyonsaba of Burundi, who won silver; and Margaret Wambui of Kenya, who won bronze.

"It was very frustrating to watch it happen," Coleman says. "It wasn't about the individuals; it was about the goals of women's sport ... And it was really hard to know that on that day there would not be a female, biologically speaking on the podium in the women's 800."

But how to define exactly who is a biological woman is not at all clear-cut.

"Sex is not defined by one particular parameter," says geneticist Eric Vilain. What's more, he says, "for many human reasons, it's so difficult to exclude women who've always lived their entire lives as women — to suddenly tell them 'you just don't belong here.' Because the implication is to tell them 'well, you're not really a woman.' And I think society should not accept that easily."

No matter what you do, you're going to end up hurting someone.

The new rules apply only to certain distance events, from 400 meters to one mile, where, the IAAF claims, runners get the most performance benefit from testosterone. Scientists who testified on behalf of Semenya dispute those data.

If the affected athletes want to race in those restricted events, the IAAF says, they can compete in the male classification.

Dr. Vilain says that's absurd: "If the same athlete could be a woman in one and a man in another, it makes absolutely no sense," he says.

As for how the DSD athletes can suppress their testosterone, they have three choices: they can have their testes surgically removed; they can get a monthly injection that blocks testosterone; or they can take birth control pills.

But all of those options — even birth control pills — come with risks, says Dr. Veronica Gomez-Lobo, the founder of the Differences of Sex Development clinic at Children's National Health System.

We are against doping of any sort ... It is definitely not a way to tell someone you're a woman only if you take certain medications.

"Even though we tend to think of [oral contraceptives] as being very safe," she says, "they can cause blood clots that can travel to your lung and and can be very dangerous. And although that's very rare, that can happen. So you're forcing somebody to take a medication she doesn't need and she doesn't want to take, and she's incurring the side effects and risks of that medication only to compete."

The World Medical Association, or WMA, is so angered by the IAAF regulations that they've urged doctors around the world to refuse to comply. The WMA calls the regulations unethical and a violation of human rights.

"There is no medical need and no medical indication for this therapy, and therefore, doctors should not prescribe it," says Dr. Frank Montgomery, the WMA's chair of council.

Montgomery calls it "inverse doping" to require athletes to take drugs that will sabotage their performance.

"We are against doping of any sort," Montgomery says. "Ethically and medically this fairness argument doesn't carry. It is definitely not a way to tell someone you're a woman only if you take certain medications."

None of this is simple.

"No matter what you do, you're going to end up hurting someone. And I think that's what makes this topic so difficult," says Steve Magness, who coaches professional runners and writes about the science of performance.

"You can at the same time feel incredible compassion toward Semenya and DSD athletes and say that 'hey, what's happening isn't right'. But at the same time, you can say we protect the women's division of sport for a reason and we have to decide somewhere where we want to divide that."

For now, these rules apply only to track and field. It will be up to other sports federations to decide whether to follow suit.