Accessibility links
Chinese Tourism To U.S. Down After Years Of Booming Growth Fewer Chinese tourists have been visiting Hawaii, Arizona and other population destinations in recent years. The strong dollar has made travel more expensive, just as political tensions have grown. 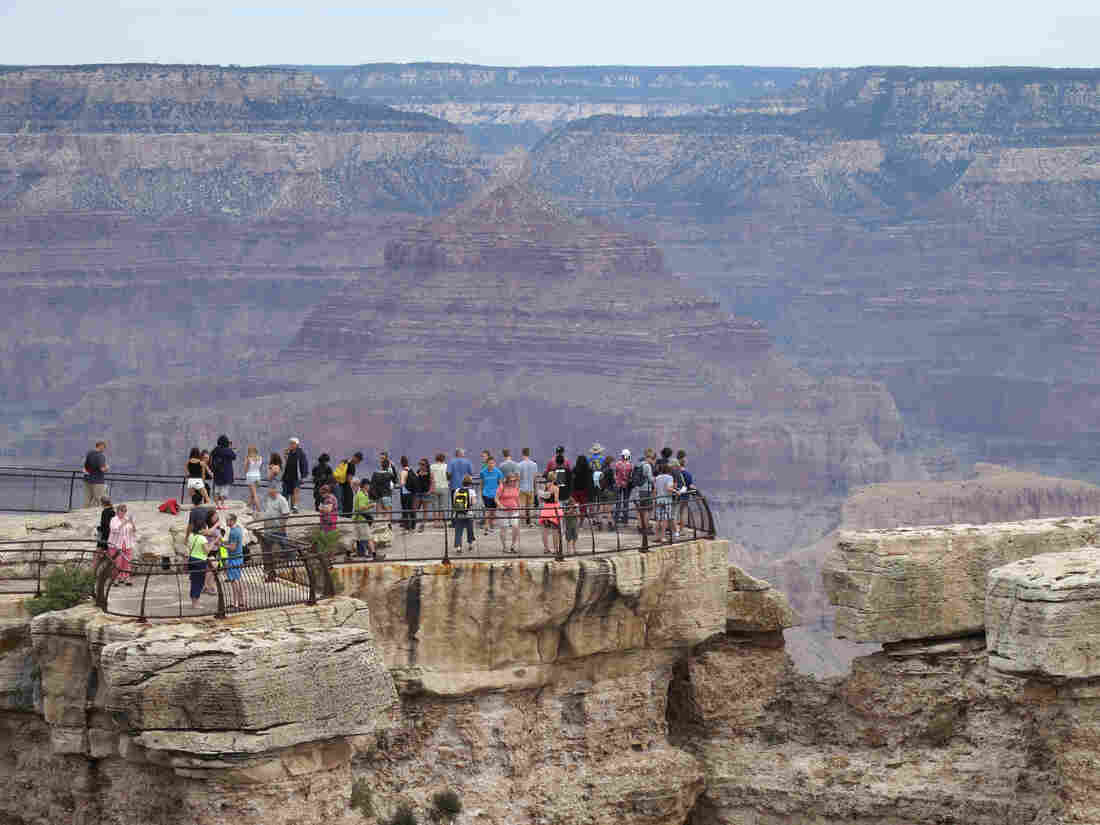 Grand Canyon officials don't keep track of visitors by country of residence, but Mandarin-language brochures are the most in demand there. The Arizona Office of Tourism estimates that in 2018, the number of Chinese visitors to the state dipped 3.7%, after nearly quadrupling from 2010 to 2017. Sean Gallup/Getty Images hide caption 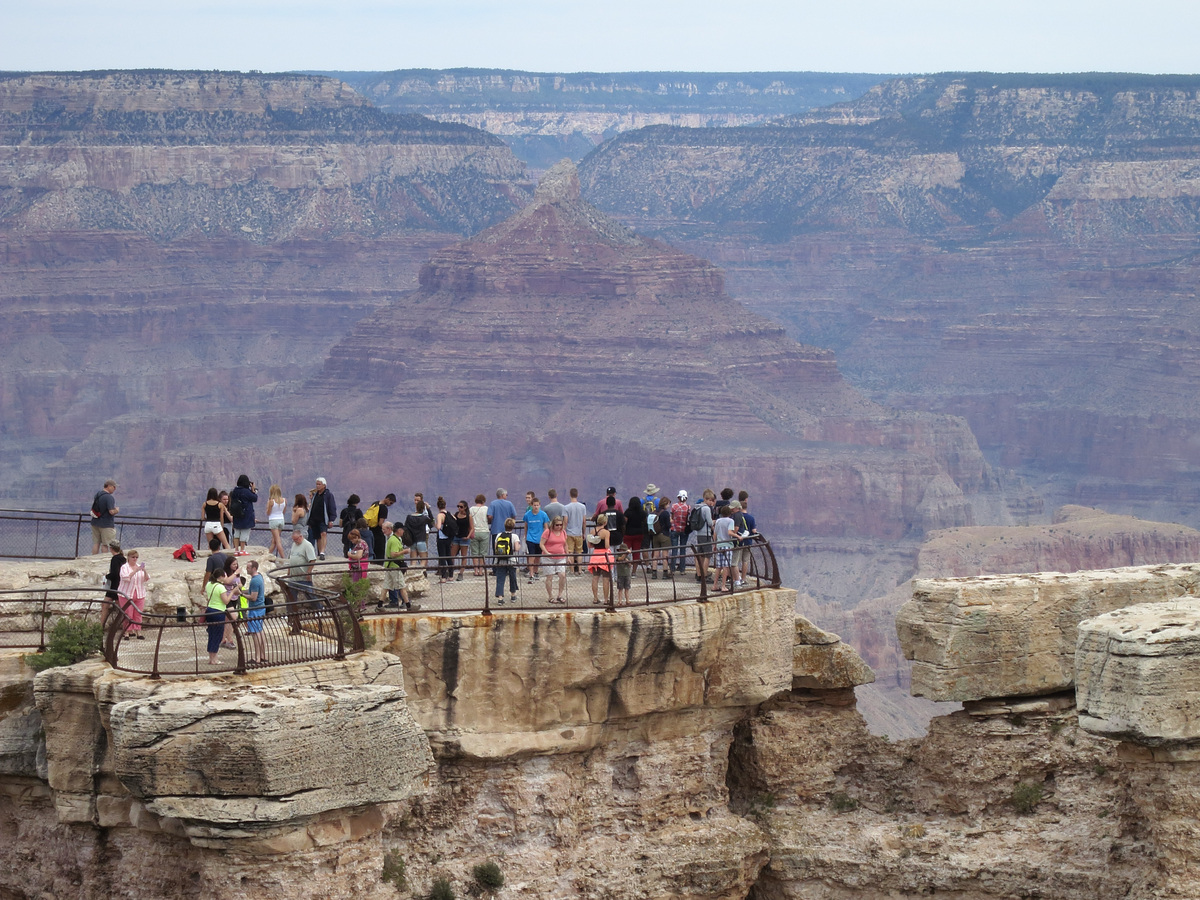 Grand Canyon officials don't keep track of visitors by country of residence, but Mandarin-language brochures are the most in demand there. The Arizona Office of Tourism estimates that in 2018, the number of Chinese visitors to the state dipped 3.7%, after nearly quadrupling from 2010 to 2017.

For years, a record number of Chinese tourists have flocked to U.S. attractions like Hollywood, Capitol Hill and the Grand Canyon. But their numbers are now falling.

The strong dollar has made U.S. travel more expensive and tourism to the U.S. has matured — just as trade and political tensions have grown between the countries.

In Hawaii, the number of Chinese visitors dropped by a quarter in April and by more than 23% through the first four months of 2019, compared to the same time last year, according to the islands' tourism office.

In Arizona, home of the Grand Canyon, the state's Office of Tourism estimates the number of Chinese visitors declined 3.7% in 2018 — after nearly quadrupling from 2010 to 2017.

Nationwide, the number of visitors from China fell in 2018 for the first time since 2003 — down by 5.7%, according to data to be released on Friday by the National Travel and Tourism Office. However, they remained the biggest spenders of all international travelers, spending $36.4 billion last year.

"It's really hard to predict what is actually causing" the trends, said Tori Barnes of the U.S. Travel Association. She said the strong dollar is making travel to the U.S. more expensive. And "there's a potential that some of the trade skirmishes that we're having with countries like China could have unintended consequences," Barnes said.

At the same time, Barnes and other tourism experts also said the tourism market for Chinese travelers to the United States has grown so fast in recent years — skyrocketing to fifth-most-common origin of U.S. visitors — that it was bound to level off.

"We had double-digit growth for years; now we're down to single-digit," said Kathy Smits, vice president of international tourism at Los Angeles Tourism. Last year, Chinese tourism to Los Angeles — one of the most popular destinations — grew 7 percent, hitting a record 1.2 million visitors. This year, it's forecast to grow 6 percent.

That's why Chinese tourism has been a boon to the U.S. services industry. In fact, Barnes said, the money spent in the United States by tourists is considered a U.S. export, offsetting the trade deficit between the U.S. and China.

"Bottom line is ... they stay longer and spend more," said Elliott Ferguson, head of Destination DC, an organization that promotes tourism to the nation's capital. His group has a staffer dedicated to presence on WeChat, a major messaging, payment and social media app in China.

Ferguson did not yet have data for travel to Washington, D.C., in 2018, but said that Chinese visitation dipped slightly in 2017 after peaking in 2016. New York City has not tallied 2018 numbers yet.

"It's a little bit of a murky picture. ... The overall political atmosphere and tensions probably had some impact," said Sage Brennan, co-founder of China Luxury Advisors, a consulting and marketing firm that helps U.S. businesses draw Chinese tourists. But "we're not hearing from the consumer side any less demand to come to the U.S. right now," he said.

In Arizona, where tourism is the top export industry, Mandarin-language brochures are the most in demand at the Grand Canyon, said Becky Blaine, deputy director of the Arizona Office of Tourism. She and other tourism officials have been sending delegations to China for six years as tourism from there has boomed.

"We've anticipated some leveling off of that explosive growth, and we're seeing higher spending even as the travelers dipped slightly in numbers," Blaine said.

Hotels, retailers, tour operators and other U.S. businesses have been expanding their marketing to WeChat and other Chinese platforms, hiring Mandarin speakers and learning about Chinese culture to better accommodate the guests. Many state tourism officials regularly send delegations to China or have even set up China-based offices.

Travel from China grew in recent years, after the governments of China and the U.S. in 2014 agreed to create 10-year visas for each other's citizens. Previously, the visas lasted one year. Also, airlines have been introducing more nonstop flights.

In fact, Hawaii's officials said Chinese travel declined in 2019 partially because Hawaiian Airlines in October discontinued its nonstop flights between Beijing and Honolulu.

In January, the Chinese government told Chinese businesses to avoid trips to the U.S., according to a Bloomberg report. This followed a similar warning from the U.S. government, as China detained two Canadian citizens following Canada's detention of a Chinese executive at tech firm Huawei at the request of the United States.

The U.S. and China have also been in an escalating war of tariffs, with the Trump administration pushing China to stop subsidizing its industries, respect intellectual property rights and make it easier for U.S. companies to compete in China's market.

U.S. tourism representatives Ferguson, Blaine and Smits all said that in their recent meetings in China, politics and trade tensions did not come up much, as they face a lot more questions about the logistics of U.S. travel, such as the time it takes to get a visa.