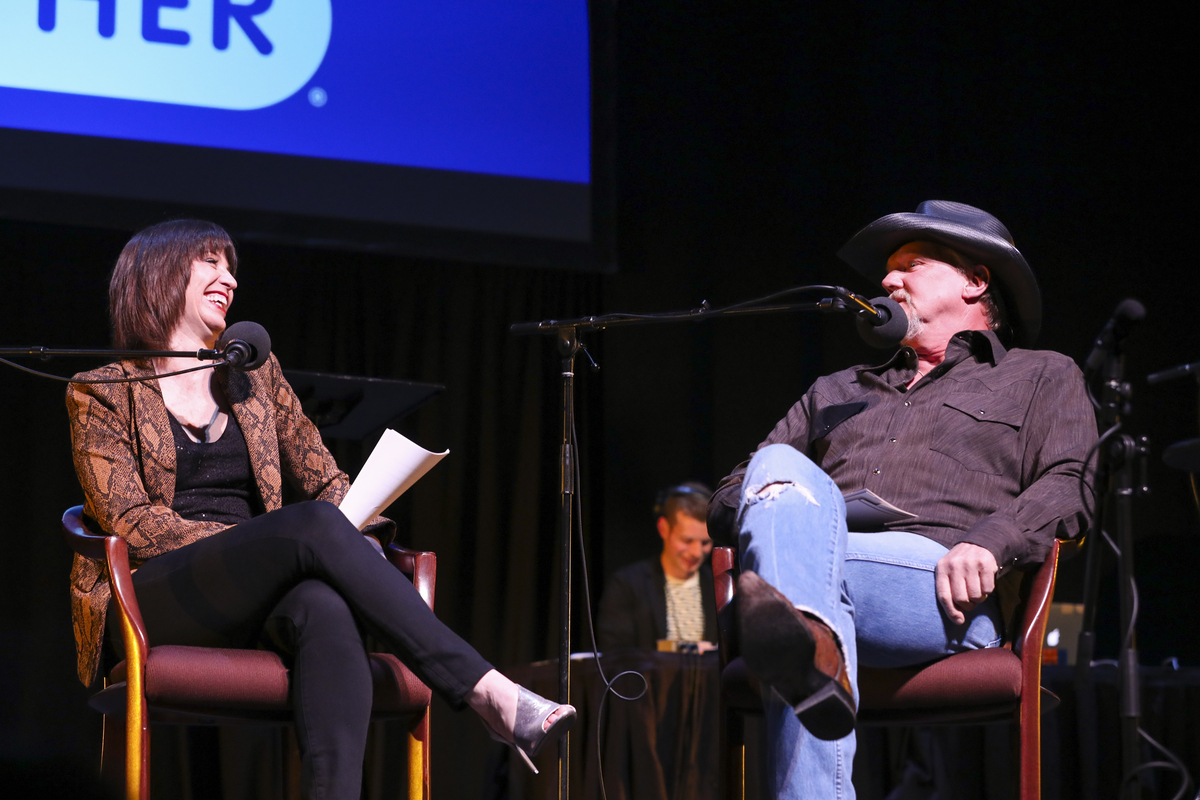 Host Ophira Eisenberg chats with Trace Adkins on Ask Me Another at TPAC's Polk Theater in Nashville, Tennessee.

Trace Adkins has followed many paths in his life. Through it all, however, he's always returned to music. "This is nothing but a hobby that got horribly out of control," he deadpanned to NPR's Ask Me Another host Ophira Eisenberg at TPAC's Polk Theater in Nashville, Tennessee. Long before he was a country music superstar, Adkins received his first guitar from his father when he was 10 years old. Although he wasn't known for his musical skills or aspirations, Adkins' father paid for his son's music lessons. "I never asked him why he did that, either. All of this is his fault."

A few years on, Adkins went to college to pursue both music and football. After injuring his knee for the second time at age 19, his athletic career ended. Adkins recounted how his orthopedic surgeon advised him to "get away from the game while you can still walk." Music, however, still remained a hobby. Adkins then studied Petroleum Engineering at Louisiana Tech while pursuing a music degree on the side. After college he used his degree to work on oil rigs — all the while playing music. "I'm one of those blessed people that...something that I love to do, now I get to make a living doing it."

Eventually, Adkins moved to Nashville in his twenties, where he soon was discovered and signed by producer Scott Hendricks, who was immediately captivated by his voice. "I was introduced to him at baggage claim at the airport... He was like, 'Can you sing?' And I was like, "A little bit." Asked how he maintains his iconic baritone voice, Adkins deadpanned, "Whiskey and cigarettes," — before adding, "Kale." Trace Adkins appears on Ask Me Another at TPAC's Polk Theater in Nashville, Tennessee.

Adkins' music career flourished throughout the 1990s and 2000s, with hits such as "Honky Tonk Badonkadonk" and "I Left Something Turned On at Home." And in 2003, he was invited to join the ranks of the Grand Ole Opry — the renowned stage concert showcase honoring country music and its history, and the longest running country music radio broadcast. "The first time you walk out on that stage, if you're human, you're petrified. And I was."

To date, Adkins has released 12 studio albums and six compilation albums, but he's also branched out to acting — including films such as Square Dance, The Lincoln Lawyer, Deepwater Horizon, and Hickok. And he recently began hosting his own reality television show, Ultimate Cowboy Showdown, which will soon air in the Fall of 2019. He explained his style for judging the contestants, "I said, 'If I don't like you, you're not gonna stay long enough to soften up a chew of tobacco.'"

Appearing on Ask Me Another wasn't Adkins' first quiz show rodeo. Of his previous appearance on the game show Pyramid, Adkins explained, "It was horrible." He continued to relate the story of how he "put Donny Osmond in a headlock" as a greeting, only to learn that Osmond was recovering from recent neck surgery. "I almost killed an Osmond," Adkins recalled. "And the best one!"

Adkins didn't have to go it alone for his Ask Me Another challenge. Singer-songwriter Carlene Carter joined Adkins on stage, where she had to identify members of the Grand Ole Opry based on his clues.

On performing in the Grand Ole Opry:

"Every Tuesday night, Friday night, Saturday night, it's a family reunion backstage. And that's the coolest part to me about the Opry... It's a beautiful experience. I love it every time. I've never had a bad experience at the Opry. Ever."

Heard on Trace Adkins And Carlene Carter: Cowboys And Cowpunks.