Accessibility links
'Sordid Chapter' Ends As Philippines Sends Back Canada's Trash "Baaaaaaaaa bye," one Philippine official said as 69 shipping containers of rubbish started the journey back across the Pacific. 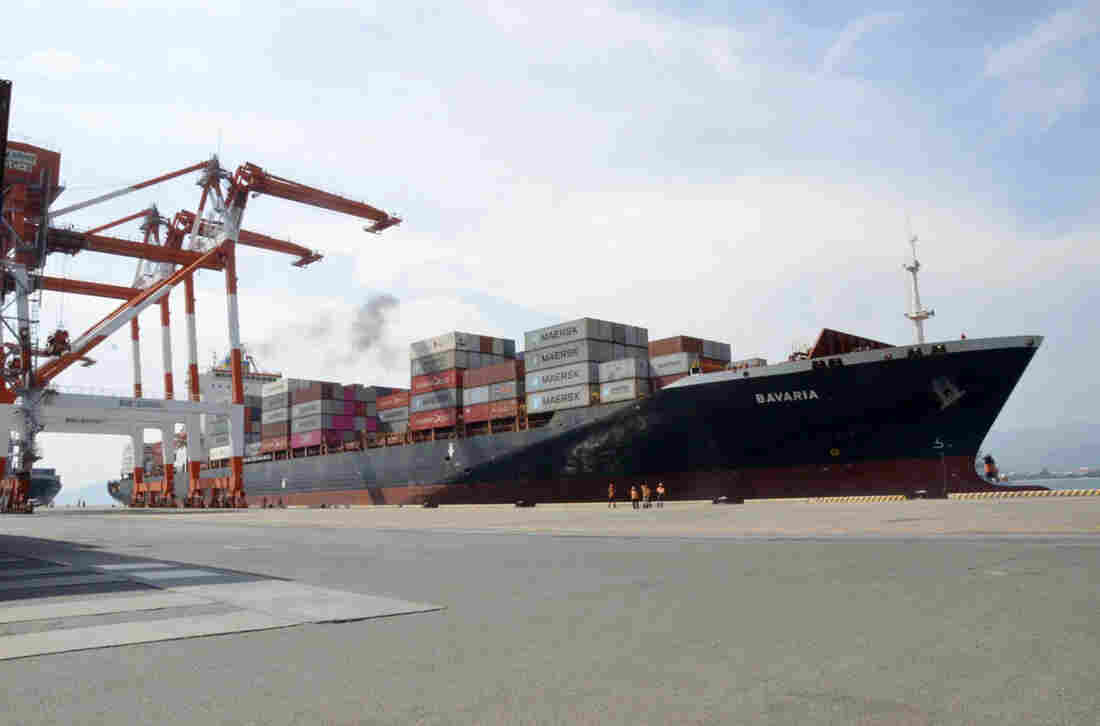 The Philippines shipped 69 containers of garbage back to Canada on Friday. Nilo Palaya/AP hide caption 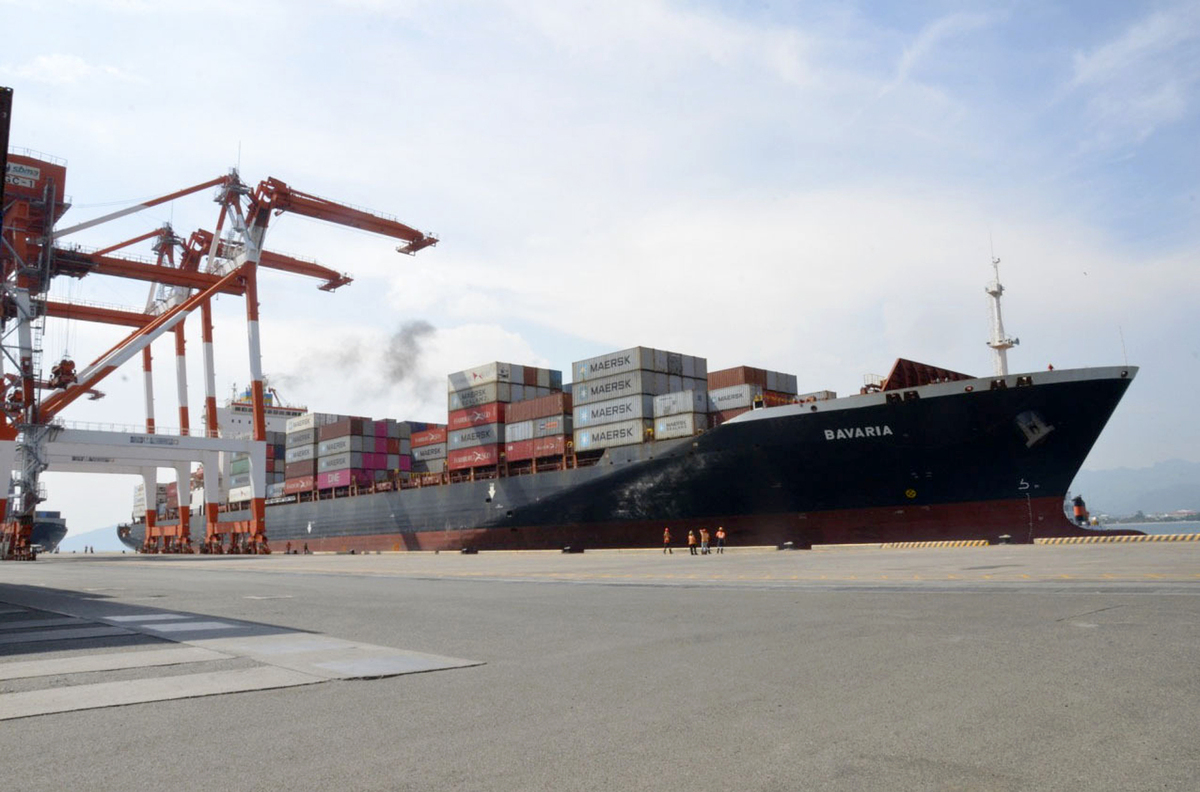 The Philippines shipped 69 containers of garbage back to Canada on Friday.

Shipping containers of Canadian trash have moldered in the Philippines for years, in a situation so irksome to Philippine President Rodrigo Duterte that he threatened to personally sail it back to Canadian waters.

Now, much of the trash that arrived in 2013 and 2014 is on its way back to Canada. The Canadian government says that 69 shipping containers of rubbish have left the Philippines and are expected to reach Canada by the end of June.

The long-running saga highlights the frustrations of multiple Asian countries that have received unwelcome, nonrecyclable trash. The Philippine government accused Canada of missing a deadline to take back its waste and even said it was recalling its ambassador and consuls from Canada over the dispute.

"I cannot understand why they're making us a dump site," Duterte said at a news conference last month, in which he threatened to declare war against Canada if it didn't remove its waste. "I will not allow that kind of s***."

"The Government of Canada is taking all the necessary measures to ensure safe and environmentally sound transport, handling and disposal of the waste in Canada," Gabrielle Lamontagne, a spokesperson for Environment and Climate Change Canada, told NPR in an emailed statement. She added that it will eventually be disposed of at a waste-to-energy facility in Vancouver.

Philippine Foreign Secretary Teodoro Locsin seemed particularly pleased to see the waste leave his country. "Baaaaaaaaa bye, as we say it," he wrote on Twitter, with an image of the ship sailing away.

As NPR's Bill Chappell has reported, when Canada sent more than 100 shipping containers to the Philippines, the containers were declared to hold recyclable plastic. But they contained a nasty surprise: According to local media, the containers actually were full of "household trash, plastic bottles and bags, newspapers, and used adult diapers."

Wilma Eisma, the administrator of the Subic Bay Freeport Zone where the ship departed, praised Duterte for bringing about a "satisfactory conclusion to this sordid chapter in our history," as Philippine news site ABS-CBN reported.

The return shipment doesn't include all of the disputed Canadian trash; waste from about 26 of the containers was buried in a Philippine landfill, according to ABS-CBN.

Canada has said the trash was sent to the Philippines by a private company, identified by CBC as Chronic Inc. The Canadian government is now considering legal options against the company.

"Part of the solution around this is making sure we hold the companies responsible if they're illegally exporting waste to other countries," Canadian Environment Minister Catherine McKenna said, as CBC reported. "The reality is developing countries no longer want to take plastic pollution or waste from developed countries and that's exactly why we have a zero-plastic-waste strategy."

The broadcaster says the transfer of the waste back to Canada is costing the government some $840,000 (1.14 million Canadian dollars). 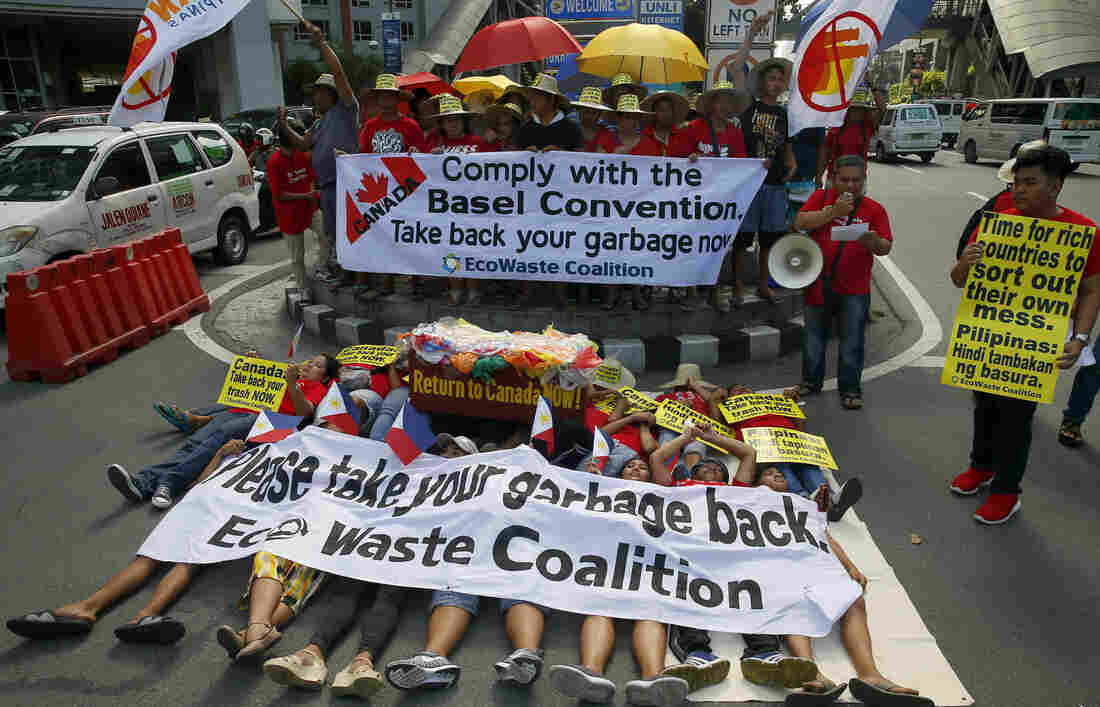 Environmentalists staged a mock die-in protest earlier this month outside the Canadian Embassy in Manila to demand the Canadian government speed up the removal of its garbage. Bullit Marquez/AP hide caption 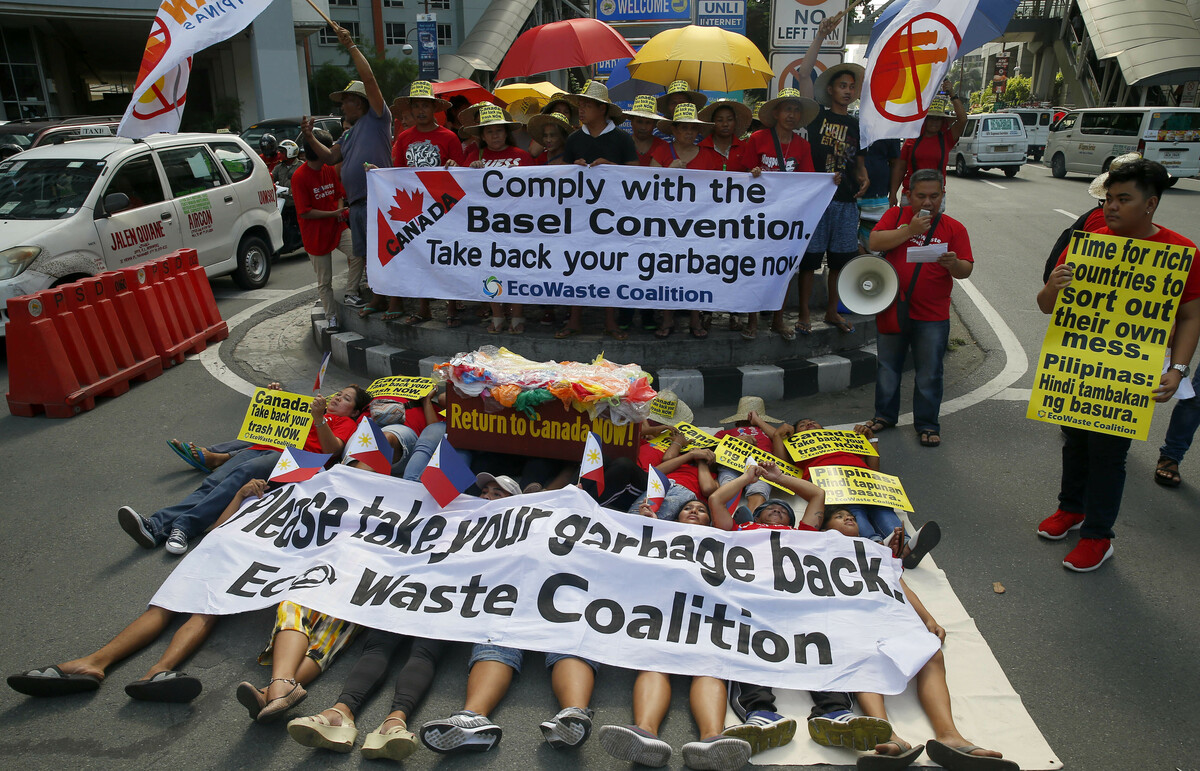 Environmentalists staged a mock die-in protest earlier this month outside the Canadian Embassy in Manila to demand the Canadian government speed up the removal of its garbage.

Environmental groups have repeatedly protested to push for the removal of the trash.

"This ordeal has taught us of the urgency of correcting outmoded regulations allowing waste imports into the country under the guise of recycling," Aileen Lucero of the Ecowaste Coalition said in a statement. "We need to close this ghastly loophole that is facilitating illegal waste traffic and turning our country into a dumping ground for plastic, electronic and hazardous wastes, which should be safely recycled, treated or disposed of in the country where such wastes were generated."

As NPR's Chris Joyce has reported, China used to accept some 70 percent of the world's plastic waste — but it recently decided to almost entirely stop taking it.

As as result, "shipments of plastic waste to other Southeast Asian countries have skyrocketed," Joyce said, adding, "Recycling experts say it's a time of reckoning for their industry and that wealthy countries need to stop exporting to countries that can't handle it."

On Thursday, Malaysian Prime Minister Mahathir Mohamad announced that his country plans to return thousands of tons of plastic waste to its source countries.