Accessibility links
Thousands Wait In Juárez, Mexico, For A Chance At Sanctuary In The U.S. Most people waiting are from Cuba and Central America, but increasingly Juárez has become a destination for migrants from all over the world who are fleeing violence and persecution. 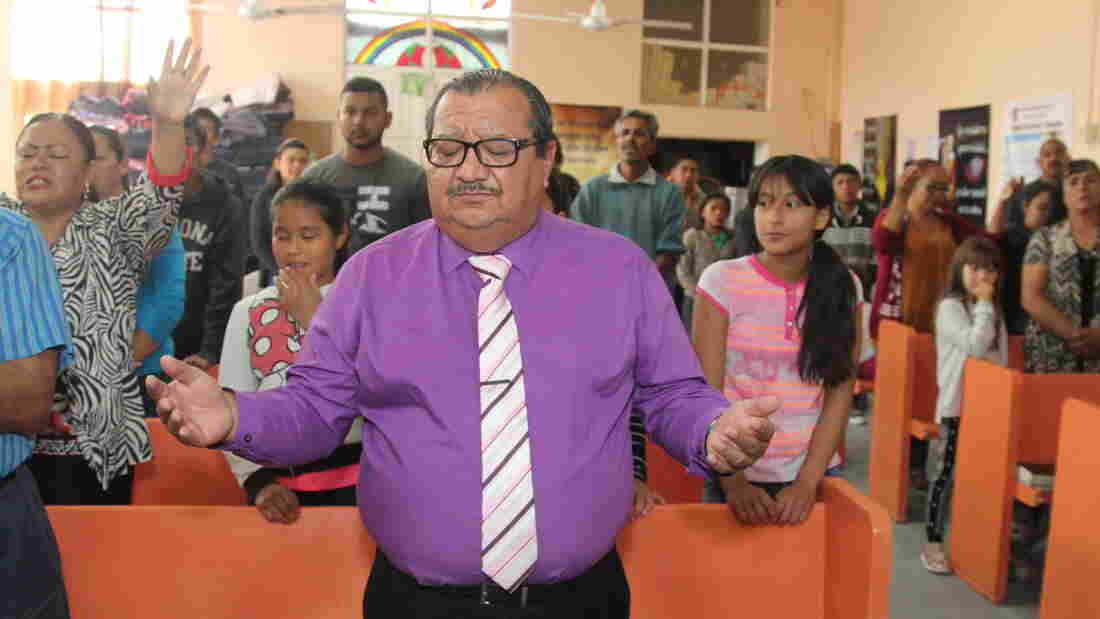 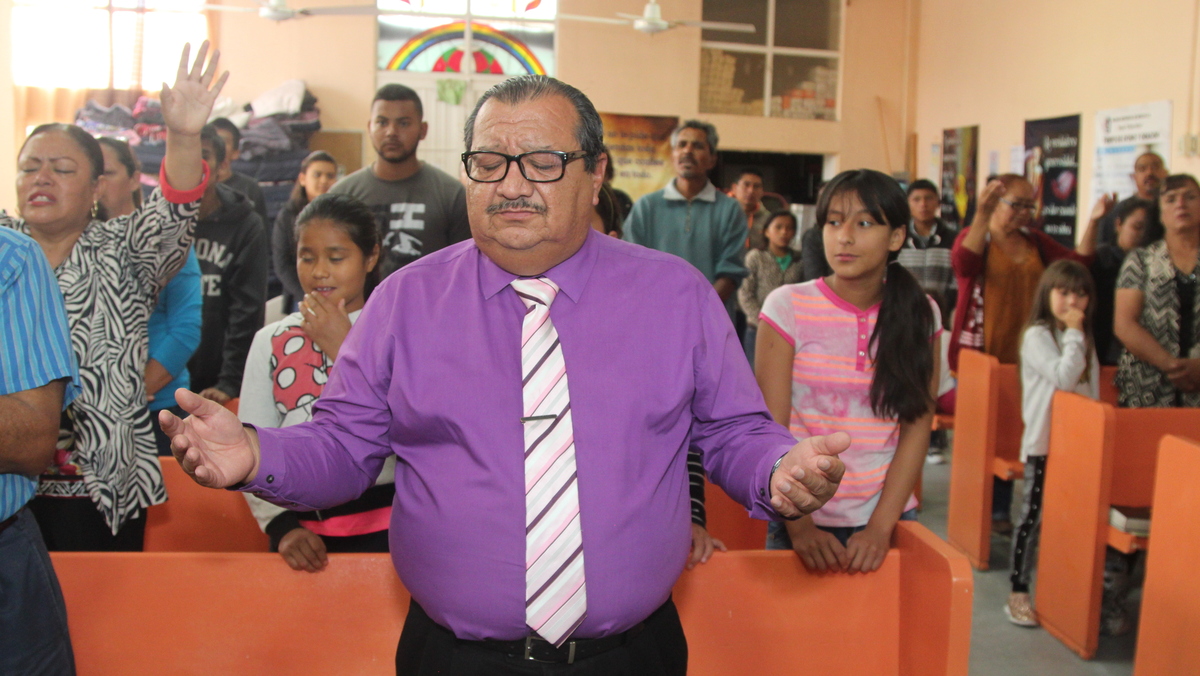 Juan Fierro García runs a migrant shelter in Juárez, Mexico, that houses asylum-seekers. Here, he joins in prayer with migrants from Central America, Cuba and Africa.

The city of Juárez, Mexico, across the border from El Paso, Texas, has long been a migrant gateway to the United States.

In mid-May, Mexican authorities said at least 14,500 asylum-seekers either have passed through Juárez on their way to the U.S. or were still waiting in Juárez for their opportunity to apply.

A large share of the migrant flow is coming from Cuba and Central America. But Juárez has also become a destination for people fleeing any number of conflicts and oppression around the world. That includes people from Africa.

As soon as they get my story, they will believe me and I'll make it there. So I have a lot of faith. That's my power.

In one Juárez migrant shelter, El Albergue Buen Pastor, or the Good Shepherd Shelter, people from Honduras, Guatemala, Cuba, Nicaragua and Venezuela have been passing through in recent months.

The migration mosaic here, however, is changing. It now includes people from at least three African countries: Angola, Uganda and Cameroon.

Florant is from Cameroon, in central Africa. Like the other African migrants, he asked that his last name not be used as he fears retribution against his family in Cameroon. He's waiting for his turn to speak to U.S. border officials about his asylum claim. 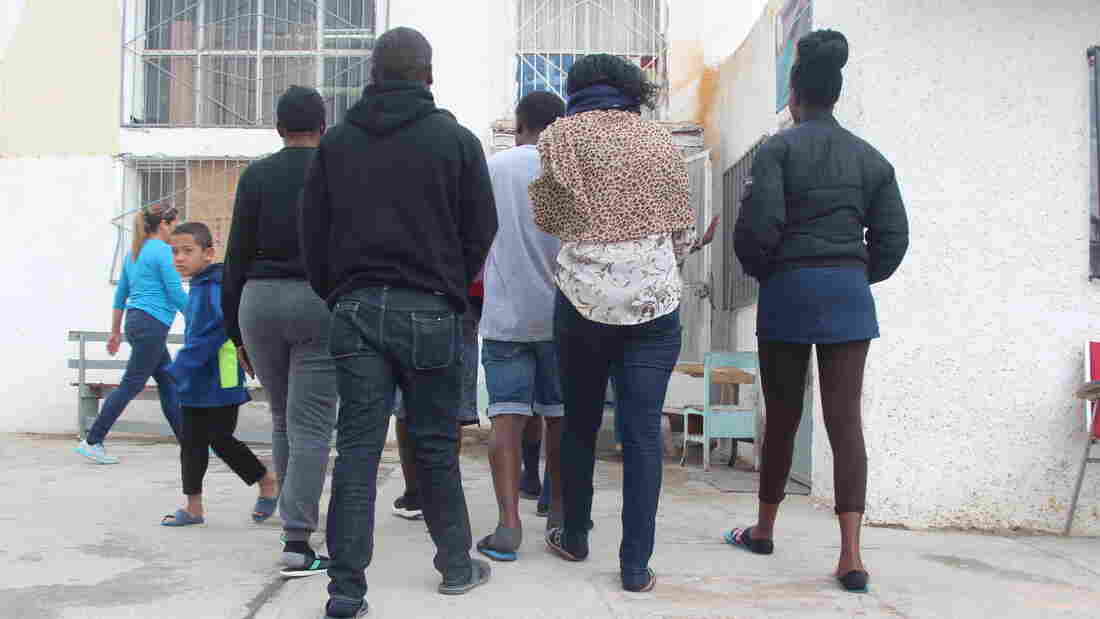 People from Cameroon and Uganda enter El Buen Pastor church in Juárez, Mexico. The migrants are among thousands waiting in Mexico for their number to be called by U.S. authorities for an initial asylum interview in El Paso, Texas. Lorne Matalon for NPR hide caption 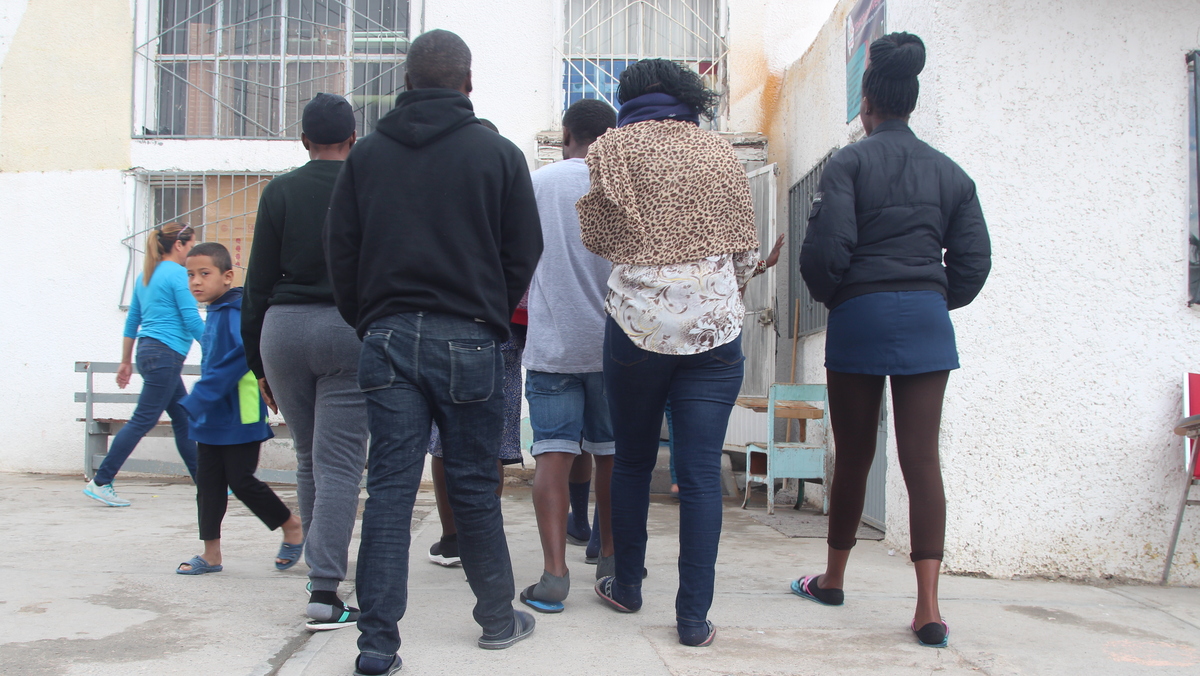 People from Cameroon and Uganda enter El Buen Pastor church in Juárez, Mexico. The migrants are among thousands waiting in Mexico for their number to be called by U.S. authorities for an initial asylum interview in El Paso, Texas.

"As soon as they get my story, they will believe me and I'll make it there. So I have a lot of faith. That's my power," said Florant.

To complete the first step in the asylum process, Florant must pass a "credible fear" interview with U.S. officials. He must establish that he fears persecution in his home country and that this persecution is a result of his race, religion, nationality or political opinion or because he is of a particular social group.

Tamra, from Uganda, said she's bracing herself for that interview.

She said it will be difficult to recount what she claims happened to her. "Painful, very painful. That is why I cannot even share my story," she said.

When they arrive in Juárez, migrants seeking asylum in the U.S. must first give their names to Mexican authorities. Each person gets a number and is put on a list of those waiting to cross the border. Each day, U.S. officials ask Mexican authorities to send over a given number of people identified by those numbers for an initial hearing in El Paso.

Musika, from Uganda, said he and two friends had tried to present themselves to U.S. authorities on the Paso del Norte International Bridge as soon as they arrived in Juárez three weeks ago. But they were sent back.

"We had to go back and wait for another time when we are permitted," he explained. He is now on that list.

Everyone in the group at this shelter lamented having to leave their families and friends in Africa. But they were fleeing violence and, for some, persecution by the authorities. Human Rights Watch says Cameroon is in crisis, with killings by separatists being met by a government scorched-earth policy. Uganda is plagued by civil unrest and human rights abuses.

John is from Kampala, the Ugandan capital. He claimed he was psychologically scarred after soldiers took him away from what he said was a peaceful, anti-government demonstration.

"I was personally detained for eight days. I didn't know where they'd taken me. I was stepped on, beaten," he stated.

Some people in this group flew from Nairobi, Kenya, to Brazil and then headed north through Colombia and Central America on a journey that took several months.

The Africans said they'd heard that Juárez is a violent place. Yet, they said they felt safe here. But the tension is palpable.

[Honest people] don't slip in the backyard or the window. They go legally, through the front door.

With the wait for a first asylum interview now several months long, and with concerns that the border could possibly be sealed, shelter director Juan Fierro García said people are growing anxious.

"People want to cross legally," he said. But in March, when President Trump threatened to close the border with Mexico, things changed. "Some people just left the next day and crossed illegally," he said.

Central American migrants have been the largest group asking for asylum in recent months, up and down the border. But in Juárez, the migrant population is now dominated by Cubans: At least 80% of those now waiting to ask for asylum are from Cuba, according to Mexican authorities. One Cuban man, 52-year-old Pedro Luis Tamayo, said he'd been a dissident in Cuba. He said even if his application is rejected, he will not enter the U.S. illegally.

Honest people "don't slip in the backyard or the window," he said. "They go legally, through the front door."

A few feet away, Michael from Uganda said he had finally received his number two days before.

That means at least a two-month wait.

Shelter director Fierro said no one will be asked to leave his shelter, but given the large number of migrants continuing to arrive here, he said they may soon run out of room.