Accessibility links
A Renaissance Fanatic Is Reborn — Again And Again — In 'Lent' Jo Walton's new novel imagines the Florentine friar Girolamo Savonarola, living life over and over again in an attempt to change his course, save his city, his friends — and himself from damnation.

A Renaissance Fanatic Is Reborn — Again And Again — In 'Lent'

A Renaissance Fanatic Is Reborn — Again And Again — In 'Lent' 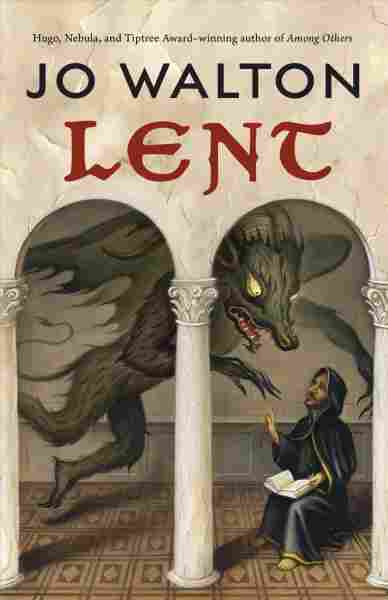 I've long loved a species of historical fiction that takes the past's mainstream beliefs at face value. Often these read as historical fantasy: a world where the sun really revolves around the Earth, for instance, or outer space is actually full of aether.

But I have a special appreciation for books that take this approach with Christian theology, which is so often considered beyond the bounds of any mythographical playfulness. The notion that Christians have Scripture while everyone else has Mythology is a double standard I'm always happy to see challenged: If there are fantasy novels full of djinn and devas, why shouldn't there also be fantasy novels full of magical saints and priests banishing literal demons? Judith Merkle Riley did this beautifully in her day, and stories like Ted Chiang's "Omphalos" or John Schoffstall's Half-Witch further literalize various Christian denominations' spiritual beliefs.

Jo Walton's Lent is very much in this tradition, set partly in 15th century Florence and partly in Hell. Girolamo Savonarola — yes, that Savonarola — is a fervently devout Dominican, and knows himself to be in God's favor due to his ability to banish literal demons (whose presence only especially spiritual people can see or feel) as well as experience bouts of prophecy. His desires are few, but all-consuming: to see his friend Pico della Mirandola (yes, that Pico della Mirandola) take holy orders; to see Florence made into God's city on Earth, a rebuke to the dissolute corruptions of Rome; to be nobly martyred when the time comes, and accede to eternity in Heaven.

He achieves everything he wanted on Earth — but once he's martyred, he goes straight to Hell. There, he remembers that he's lived this life many times, and will live it again, all unknowing. But this time, something's different: Thanks to a mysterious stone in the hand of a saint, this time, Girolamo remembers his past life, the life he's reliving — and the life he can perhaps change. Girolamo will live several iterations of the six years between 1492 and 1498, trying to prevent the deaths of his friends, protect his city, and undamn himself.

'Starlings' Showcases An Imagination That Stretches To The Stars

I love Walton's work for several reasons, not least of which is her ability to make a book feel like a conversation — between compassionately wrought characters, certainly, but also between reader and text. As with The Just City — a book which shares a similarly unabashed love for Florence and its art, not to mention a number of Lent's Florentine intellectuals — I found myself learning from it and wanting to argue with it in almost equal measure.

This is partly to do with how beautifully Girolamo's developed, how generously Walton writes a man wrestling with pride and its just causes — and partly to do with my only glancing familiarity with the setting and period. I was sufficiently uncertain about what had actually happened in history — and Walton, even when depicting demons, writes with such matter-of-fact conviction — that I kept pausing my reading to dive down Wiki-holes and gobble up everything Walton's written about the book's genesis. This was not at all because I felt lost, but because the book made me want to bring more to it, to participate in those conversations instead of only witnessing them.

I can't emphasize enough how much Walton's love of Florence and fascination with the source material shine off each page.

That said, as thoroughly as I was enjoying the long, delicious lead-up to the book's ending — a structure that felt like poetry, like a ballad, and evoked some of the same awe and wonder I experienced watching Russian Doll — the ending itself was rushed, its resonating strains muffled where I wanted a (pardon me) dying fall. It was odd, having been so dazzled by the ways in which the novel painstakingly sets up its conclusion, to find the book itself impatient to end.

But I can't emphasize enough how much Walton's love of Florence and fascination with the source material shine off each page. As I perused the photographs on her website of paintings and places connected to the book, I was impressed to find they felt familiar because the book had evoked them so warmly and completely. I've never been to Florence, but I feel as if I've been introduced to it here in the way one's introduced to a person, and more: I feel as if I know the quality of its light in different seasons, the angles of its buildings, from having dwelt a while in Walton's words.