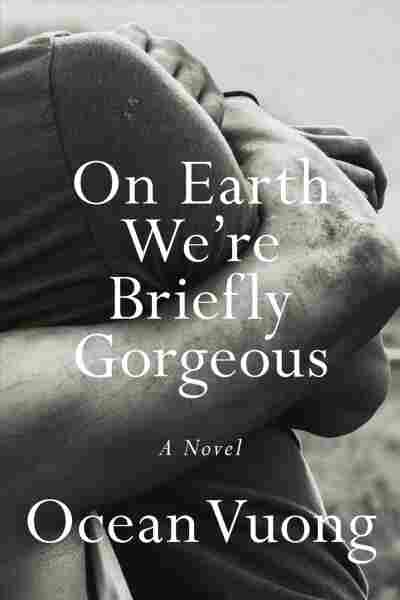 On Earth We're Briefly Gorgeous is a letter from a son to a mother who cannot read.

The mother has come to Hartford, Conn. after living through a hellscape of war in Vietnam. She goes to work at a nail salon, smokes Marlboro Reds, and more than once — more than 20 times — beats her son. But she tells herself, "I'm not a monster. I'm a mother."

The son, known as Little Dog, bears some resemblance to his author, Ocean Vuong.

"What I wanted, what I hoped to do was to speak to a rich American tradition of autobiography, all the way down to Herman Melville and Moby Dick," Vuong says in an interview. "And so for myself, I always saw the self in the American space as a potent moment of fiction. And I wanted to start with truth and end with art, as a writer. That was very important to me."

On Earth We're Briefly Gorgeous is the highly-anticipated novel from Vuong, who immigrated to the U.S. from Vietnam when he was 2 years old. Though he's won awards for his poetry, this is his first novel.

On the passage that reads:

Because I am your son, what I know of work I know equally of loss. And what I know of both I know of your hands. Their once supple contours I've never felt, the palms already callused and blistered long before I was born, then ruined further from three decades in factories and nail salons. Your hands are hideous — and I hate everything that made them that way. I hate how they are the wreck and reckoning of a dream. How you'd come home, night after night, plop down on the couch, and fall asleep inside a minute. I'd come back with your glass of water and you'd already be snoring, your hands in your lap like two partially scaled fish.

The image, the object that is a mother's hands, is also a biography of that person. It marks who they are, where they come from and what they've done, including cost of raising a child as a single mother in the American landscape. And I think when a son looks at a mother's hands that have been that calloused, he realized all the things that led to his actual life — that the hands are evidence that nothing has been easy.

That's the intimate moment between mother and son — he's in a position of power, 'cause knowledge is power. But that also means the son is now in a different hierarchical space. He's now the one teaching his mother. The power dynamic shifts. And as important as it is, she couldn't bear it, because that's all she has, is this fixed power shift that she always maintained as a mother. And if it means not being able to read, so be it — it was more important to her to remain a mother.

On Lan, the grandmother character in the story

It's a life that is part of American history. And you know, that's one of the things the book attempts to recast. Often we think of the refugee or the immigrant "finds" her American identity once she steps on American soil. But in fact, this novel argues that American identity for refugees actually begins the moment American bombs start to fall on Vietnam. In other words, American-ness begins with American foreign policy, and that in fact the lives of these people, these American immigrants — their American-ness began as soon as war started to spark in that little country no larger than California.

I think one of the most perennial questions for any immigrant, but particularly an immigrant like Little Dog who's attempting to write not only about his life but the lives of those he loved, is that to write about them is to both betray them and preserve them at once. And it's a paradox that many first or second generation immigrants must confront. And often there are no ways to come to terms with it except to embrace that fact and that project.

On the mother's statement: "I'm not a monster. I'm a mother."

It's her way of trying to recast herself in the story. And I think it's a beautiful moment where she tries to correct his vision, but also a moment of self-awareness — that she knows that she suffers from PTSD from the war, and that led to a lot of abuse and trauma and difficulty. And that there's a moment where she says: I'm still your mother. The fact that I gave birth to you, that will never change. And it's her way of staking a claim onto his life and her life. And actually, that moment to me feels the most motherly, is that reminder, that powerful reminder a woman makes to her child that: Don't forget, that you're here because of me, that I'm not a monster regardless of what I've done.

On if his own mother reads his work

She doesn't. She struggles with it ... she's spent her whole life working in factories and nail salons. And she told me herself when I started writing — she says, "You go on. You do this work. My time was all for you." And I think I try to honor that by writing the best sentences that I can.

Hiba Ahmad, Peter Breslow and Evie Stone produced and edited this interview for broadcast. Patrick Jarenwattananon adapted it for the Web.