Accessibility links
NPR Review: 'The Wise And The Wicked,' By Rebecca Podos Rebecca Podos' new novel follows a girl who's inherited her family power: She can see her Time, the moment of her death. But then she discovers it's possible to evade your Time — for a painful price. 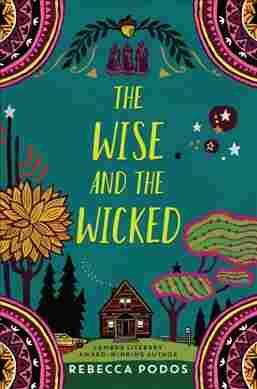 The Wise and the Wicked

Title
The Wise and the Wicked
Author
Rebecca Podos

In this tale of a family with dark secrets and divinatory gifts, Lambda Literary Award winner Rebecca Podos ponders the inevitable question: If you can read the future that lies ahead, do you also have the power to change it?

When Ruby Chernyavsky hit her teen years, she had a premonition — a vision of the moments leading up to her death. Knowing her "Time" was something she always expected, since all of the women in her family forsee their own, but what none of them know is that Ruby's days are numbered. Her Time is her 18th birthday, so in a little over a year, she'll be dead.

She could tell her older sisters, who have raised her since their mother abandoned all three of them, presumably in a futile attempt to avoid her own Time. But they're caught up in their own lives, which they've already curtailed in order to raise Ruby, and if they aren't willing to let her in on the family business of doing little spells for local women, then why should she share her secret? She could tell her cousin Cece. But Cece just saw her own Time, and seems reluctant to share it with Ruby, even though they're best friends.

One thing is certain — it's too late to tell her Great Aunt Polina, the Chernyavsky matriarch, who dies suddenly, throwing the whole extended family into an uproar. Then, at her funeral, when they read out Aunt Polina's Time as she predicted it years before, it turns out that she found a way to cheat her fate. She lived many years past her Time, and led a completely different life.

Language Has Magic In 'The Candle And The Flame'

Now that Ruby knows it can be done, she's desperate to find a way to change her own Time. But the deeper she digs into the Chernyavsky family secrets, the darker things become, until she realizes that changing her Time may come with a price she isn't willing to pay.

Prophetic abilities and the question of destiny versus free will are a pretty solid backbone for young adult drama. In those high school years, a thousand different paths stretch out ahead. It feels as though each choice will shape what the future holds. But if the future has an expiration date, choices seem to matter far less, and Ruby's only way of dealing with it is to drink on the sly and keep secrets from the people she cares about the most. She isn't coping well, which makes her relatable and compelling to follow.

The other characters are also engaging — Ruby's sisters, mother, great aunt, and extended family all stand out as distinct people who are sticking with me even as the plot begins to fade around the edges. Two key characters are queer and a third is trans, and while the LGBTQ themes are subtle, the element of family acceptance resonates strongly within the larger story.

A family curse from the old country works beautifully as a metaphor for the kinds of hardship that often drive people to immigrate to a new home.

A family curse from the old country works beautifully as a metaphor for the kinds of hardship that often drive people to immigrate to a new home, and the fact that it lingers and is passed down through the generations only makes the parallel stronger. It's clear that whatever else supernatural is going on, Ruby's family is struggling to cope with unspoken trauma. Russian folktales pepper the narrative, giving characters the opportunity to look at difficult history and family dynamics without having to face things head-on.

All of these themes work so well together that it's easy to ignore the elements that aren't as successful. Ruby has an easy-come-easy-go interest in science that feels a bit forced, and occasional excerpts from her favorite time-travel podcast never fully connect with the story. They feel like character padding — unnecessary, given that Ruby is a very compelling protagonist. In general, the beginning and middle of the narrative feel a little cluttered — which I would mind much less if the ending wasn't so abrupt and lacking in closure for multiple threads. It was a case of turning to the last page and saying, "wait, what?!" I'm invested in Ruby and her Time, and while I wouldn't want to have a bow on it, I also don't want to be left feeling like I'm waiting for an as-yet unannounced second book.

Fans of folkloric and magical family drama will definitely find a lot to like in The Wise and the Wicked, but those who want a conclusive ending might do well to wait and see if we're getting a sequel.