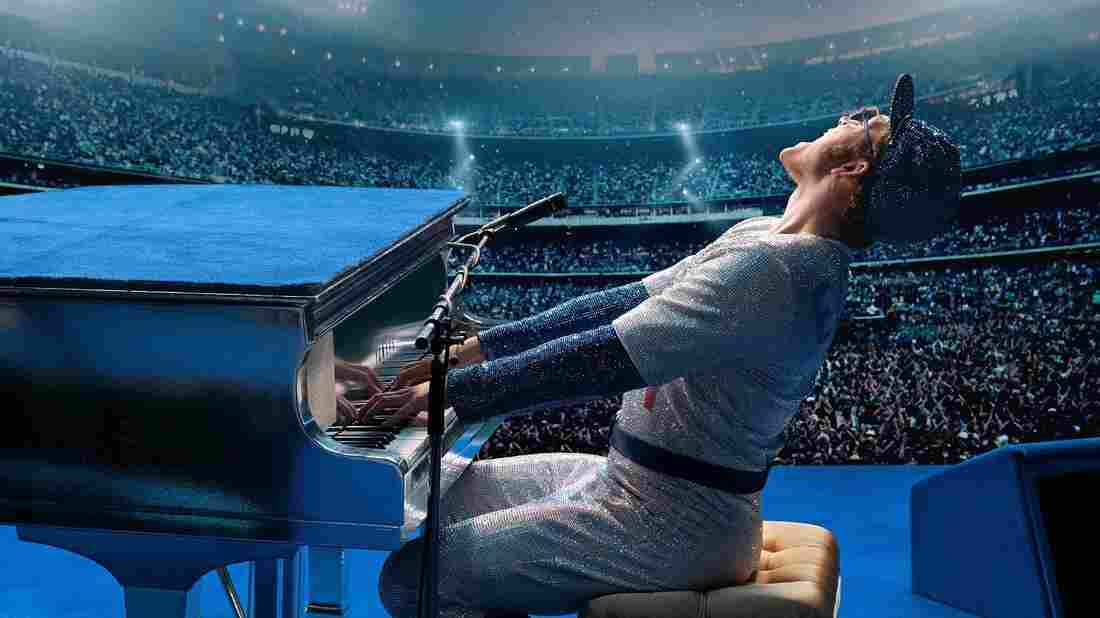 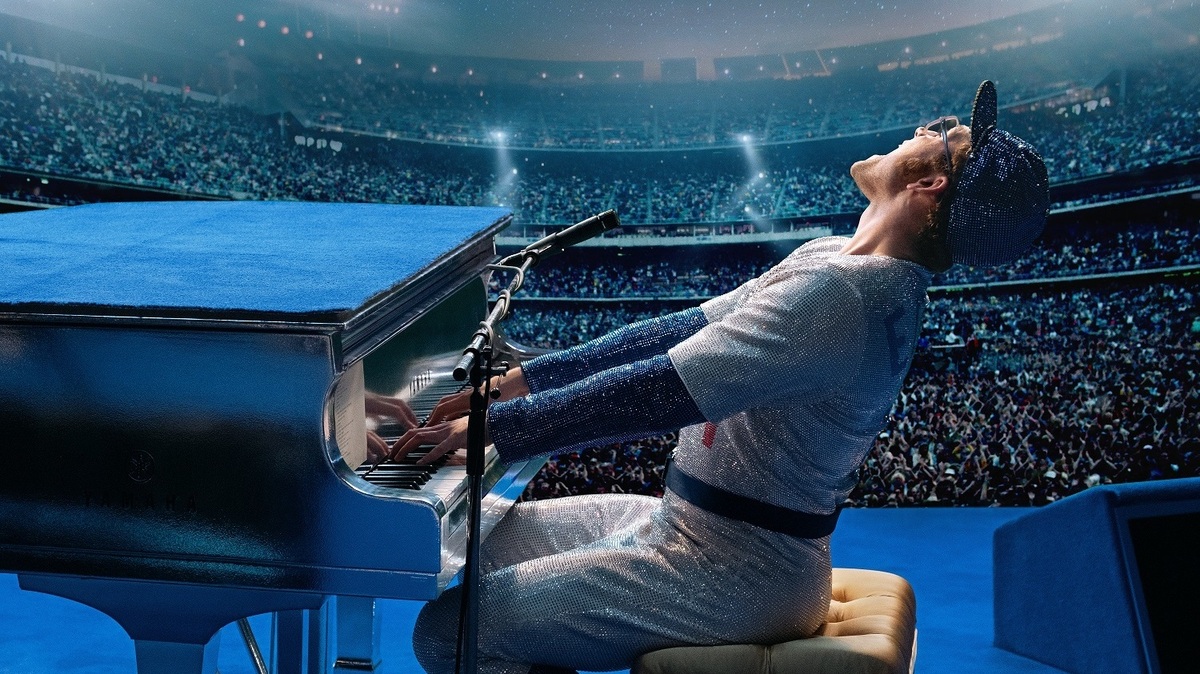 The glitter. The piano-playing. That voice. Based on a true fantasy, the story of Sir Elton John is being encapsulated with Rocketman, the larger-than-life biopic in theaters now. The film stars Taron Egerton in the lead role and was directed by Dexter Fletcher, the same director who finished the Oscar-winning Bohemian Rhapsody after its original director, Bryan Singer, was fired.

When the feature first premiered at the 2019 Cannes Film Festival in May, it got a four-minute standing ovation and made Elton John, who was in the audience, cry.

A More Reflective Leap On Elton John's 'Diving Board'

"He was watching some pretty turbulent bits of his life," Egerton says, "The movie doesn't pull its punches in that respect. But I think it was tears of joy. That was the overriding feeling. I think he really loves the movie. He went as far as to say that he wouldn't change a thing out it."

Egerton admits he welled up in the audience, too.

"Taron was asked to dig extraordinarily deep from his own personal experience in order to convey the huge breadth of emotion that we're endeavoring to tackle over 35 years of Elton's life," Fletcher says. "It's not kind of 'Oh, he was happy and then he was sad.' There's a lot more nuanced, complex journey that needed to be charted."

John and his husband, David Furnish, were producers on the film and Fletcher says having them there to consult was helpful in order to strike balance in the film's story line. But although Rocketman is an authorized biography, it's not hagiography.

"They were very clear with us from the offset that they were going to let Dex go and realize his vision for the movie," Egerton says. "They knew that it was a kind of no-holds-barred iteration of this story, but they weren't breathing down our necks the whole time, or vetting us or censoring us in any way."

Egerton and Fletcher say having John around to consult and to see the finished product was a joy to be able to do "while he's here and alive and well and kicking."

The film also doesn't shy away from John's low points in life. In one of the opening scenes of Rocketman John lists all his vices while in rehab — from "weed and prescription drugs to anger management." 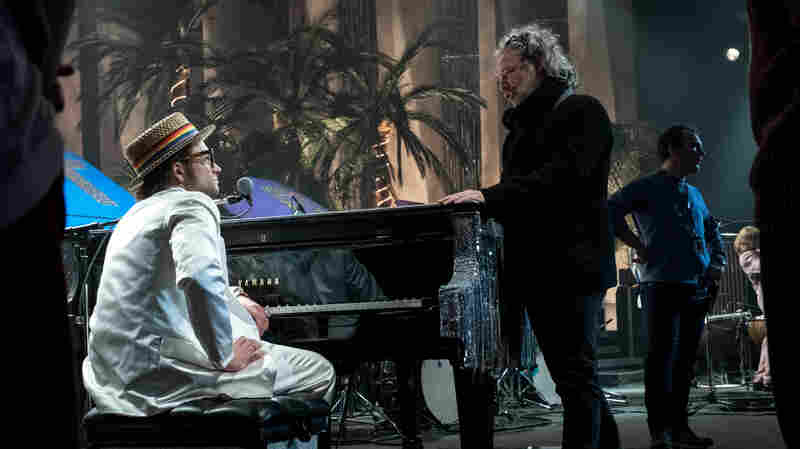 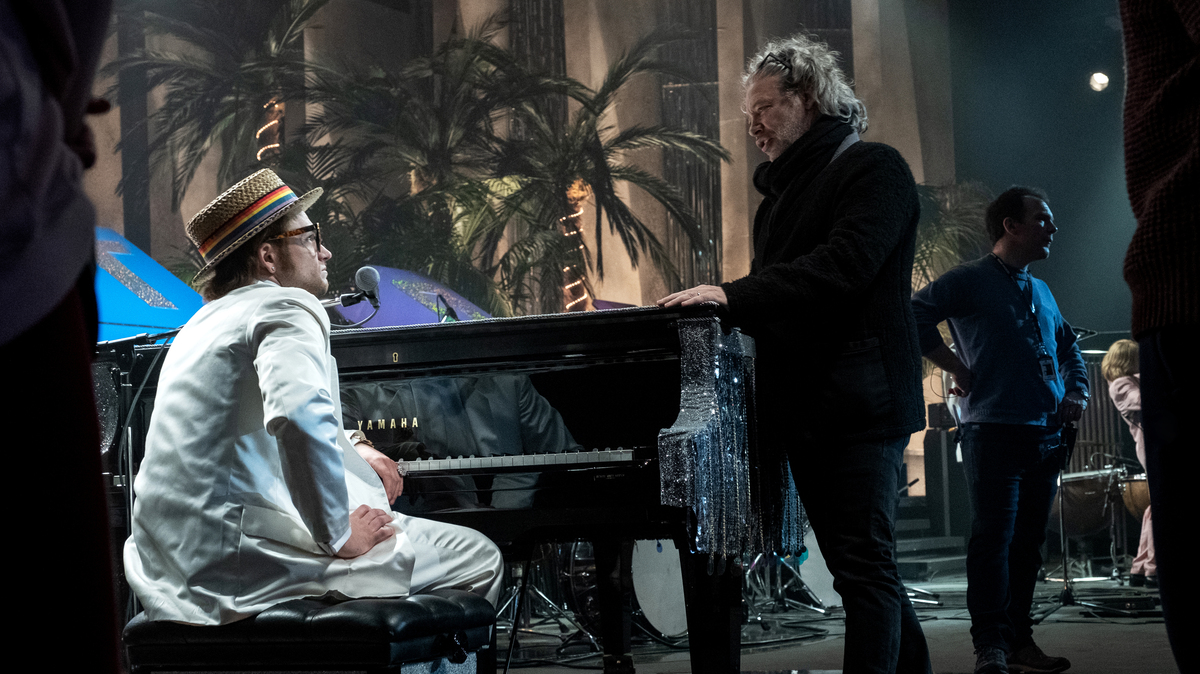 "Elton is here to defend himself if the film strays into territory that people might want to really take issue with," Fletcher says. "Whereas other films don't necessarily have that advantage. There's a real strength to that. Elton is very clear in his mind about who he is, and very at peace with that."

The movie is rated R, one of the reasons being the portrayal of homosexuality on-screen. Fletcher says compared to Bohemian Rhapsody, which drew criticism for not showing the full picture of Freddie Mercury's sexuality, Rocketman is more self-effacing.

"Bohemian Rhapsody is a very different animal. Freddie isn't around to defend himself. The only people who can defend Freddie are the people who are involved in that film," Fletcher says. "Our film tackles it because Elton has no qualms about who he is. Elton John wears glasses and plays the piano. These are two facts that we can't omit from the film. He happens to be gay as well. We can't omit and neither do we want to omit those facts from the film, because it helps make him who he is."

One of the other facts about John is, of course, his fantastic, opulent sense of style. Egerton says getting to try on so many different costumes was one of the highlights of the production for him. John even gifted Egerton one of his own treasured jewelry pieces for the film.

"I love the sort of signature costume of the movie, which is the orange neoprene outfit," Egerton remembers. "With that costume, I also wear a very beautiful diamond earring, which was the first one that Elton bought in 1972, and he made a gift of it to me about a year ago. ... So as that costume gradually falls away over the course of the movie, and the sort of headpiece comes off, you will catch a glimpse of Elton's first-ever diamond earring."

Rocketman is in theaters now. Listen to Egerton and Fletcher's full interview with NPR's Lulu-Garcia Navarro at the audio link.