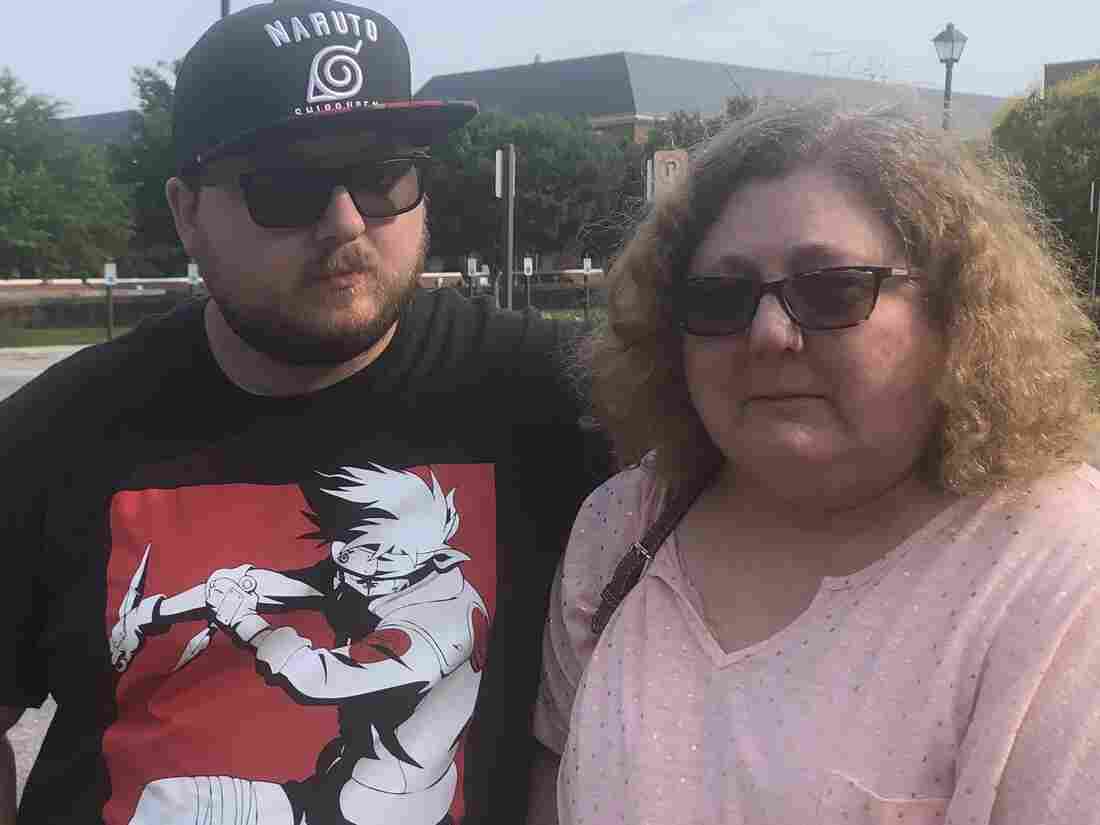 Christi Dewar, a survivor of the Virginia Beach mass shooting, stands with her son, Charles Dewar III, next to the office complex where a gunman killed 12 and injured several others on Friday. Bobby Allyn/NPR hide caption 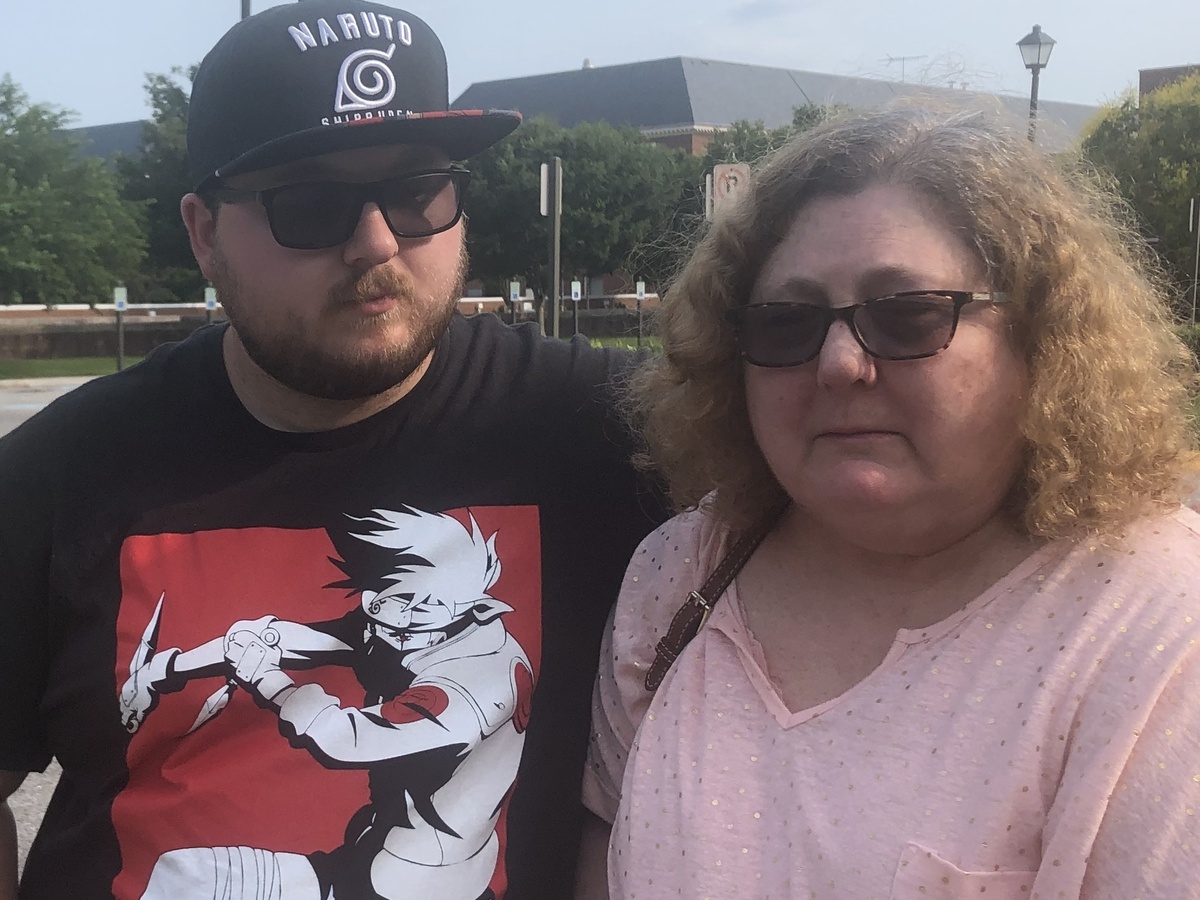 Christi Dewar, a survivor of the Virginia Beach mass shooting, stands with her son, Charles Dewar III, next to the office complex where a gunman killed 12 and injured several others on Friday.

When she first heard a woman screaming "active shooter" while dashing down her office hallway, Christi Dewar's first thought was: It must be a drill.

Dewar, 60, of Chesapeake, Va., who has worked in the city of Virginia Beach's public utility department for nearly 13 years, had been there long enough to know that loud sounds were not necessarily cause for alarm.

On Friday afternoon, a workplace renovation was still underway, so when she heard the first blasting pop sounds, she didn't realize she was in the midst of one of America's deadliest workplace shootings.

"When we heard the first shots, it sounded like a nail gun going off," Dewar said.

But as popping kept piercing the air, alarm set in for Dewar and one of her closest friends and longtime colleague, Ryan Keith Cox. 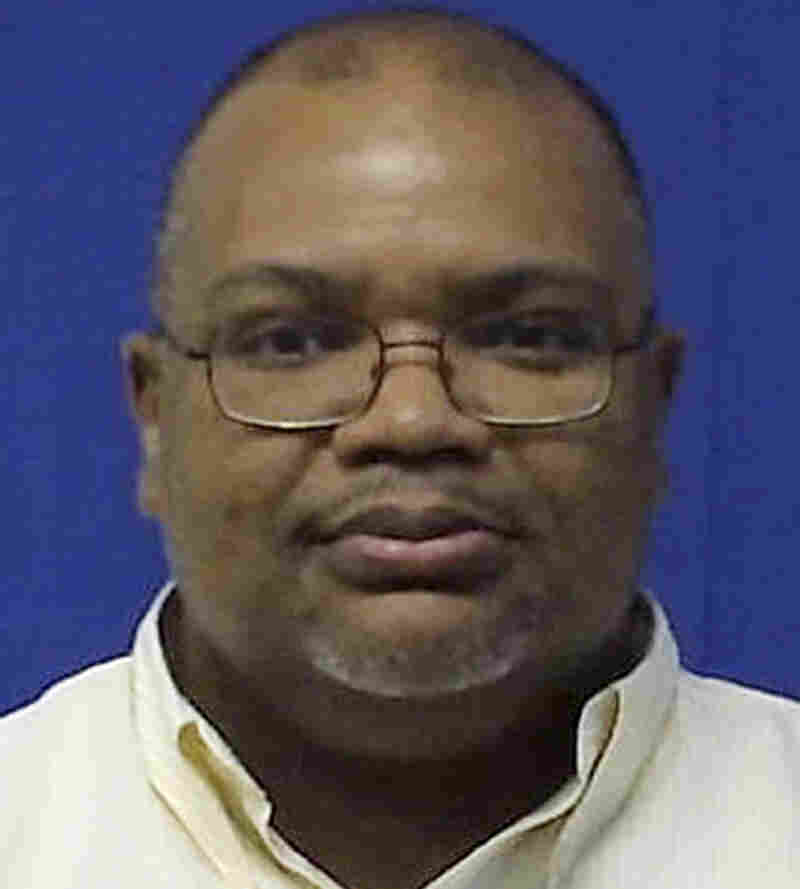 Ryan Keith Cox died in the shooting Friday. "I called him my big teddy bear," Dewar said. "Every time I was upset, he would give me a hug. When I was upset about something, he knew exactly what to say to make you smile." City of Virginia Beach via AP hide caption 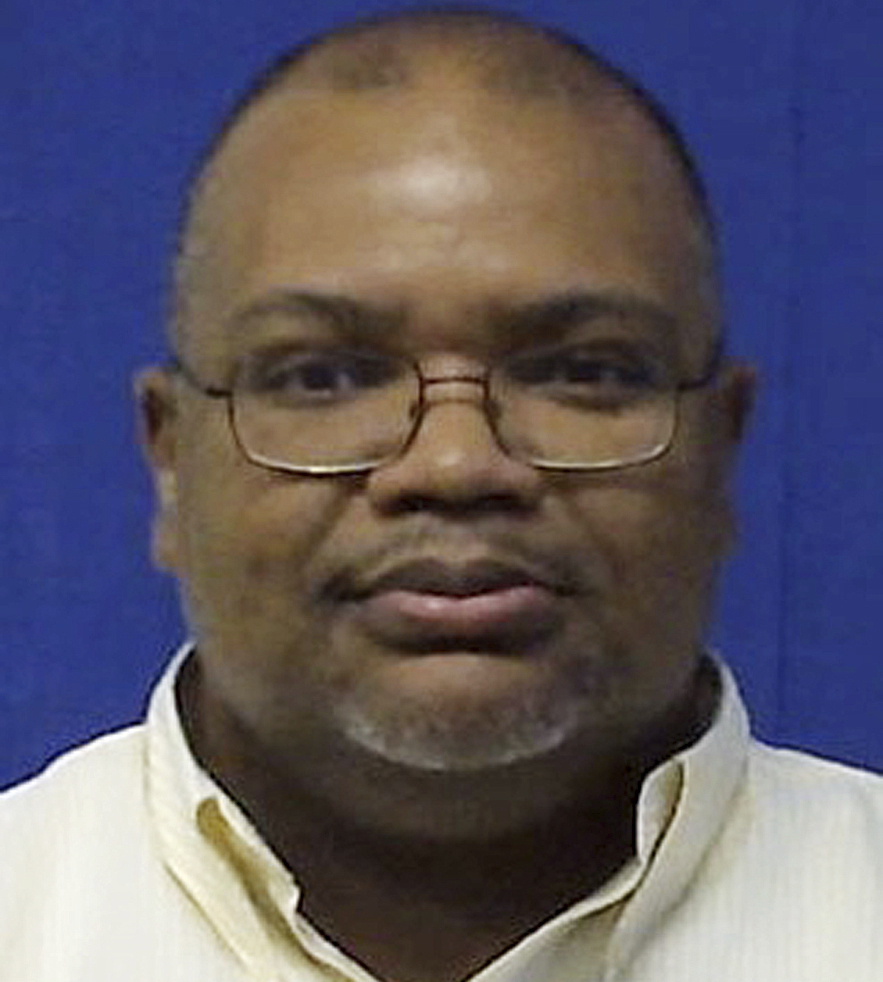 Ryan Keith Cox died in the shooting Friday. "I called him my big teddy bear," Dewar said. "Every time I was upset, he would give me a hug. When I was upset about something, he knew exactly what to say to make you smile."

City of Virginia Beach via AP

They started to move away from the noise and toward a staircase, but then a co-worker came dashing by, imploring Dewar and Cox to run the other way.

The break room, she thought, could be their refuge.

"He said, 'No, stay here, stay quiet,' " Dewar remembers Cox telling her. "I said, 'Come on,' and he said, 'I have to go check on the other ones,' " telling Dewar that she and seven colleagues should barricade themselves in an office room.

Cox left the room, while Dewar and others pushed a heavy cabinet flush against the door with all their might and kept as quiet as they could.

Cox, meanwhile, had gone quiet. Dewar and her co-workers hunkered down behind the barricade, wondering where he was, when their thoughts were violently disrupted.

"Two bullets almost came through the back of the cabinet," Dewar said. "We fell to the ground; then we heard other shots close to us," she said, choking up. "That's when he got Keith."

Police say the shooter was carrying handguns, high-capacity magazines and a silencer device. Witnesses described hearing up to 50 shots as the gunman sprayed bullets "indiscriminately," police said, on three floors of the building.

When the gunman's blaze of bullets became faint, Dewar dialed 911. It did not take long, she said, for police to arrive, some wearing what appeared to be riot gear. An officer held her hand and instructed her to "not look down" as they sped down the steps. Dewar had trouble looking away from what was below her, though.

"As we went down the stairwell," Dewar said haltingly, "I had to step over one of my friends," who authorities later confirmed had died.

Cox and Dewar had a special bond. They both started their government jobs on the same day. Their desks weren't far apart. And they clicked on a fundamental level, she said.

"I called him my big teddy bear," Dewar said. "Every time I was upset, he would give me a hug. When I was upset about something, he knew exactly what to say to make you smile. He's the type of person who you know would lay down his life for someone, just like he did."

Police officials on Saturday told reporters that Craddock was an active government employee. But Dewar said it was well known among her and her colleagues that he had put in his two-week notice shortly before the shooting spree.

Yet as authorities search for a possible motive, Dewar herself remains perplexed about her former colleague-turned-mass shooting suspect — something, to her, that had no noticeable warning signs. His demeanor was the opposite of suspicious, she said. He seemed well adjusted and a bit introverted by nature but never the subject of office drama or tension.

"He was very well dressed. He was soft-spoken," she said. "If he had a gun behind his back and he walked up to me, I would've gone up to talk to him," she said. "I would have no way of knowing."

That image washed away in a terrifying fashion on Friday. She said that during his shootout, which eventually ended with police killing him in a gunfight, the gunman didn't say anything.

"Not one word mentioned from his mouth," she said. "It was like he was methodical. He had a plan. And he executed it out. He knew exactly what he was doing and where he was going."

The municipal building, which is now a crime scene being investigated by the FBI, was open to the public. All the shooter needed to gain access to his office space was his security pass, just like any other civil servant on the government campus.

City police officials said there is no plan in place yet to beef up security throughout the complex.

To Dewar, who watched some of her closest friends die from bullets and who nearly lost her own life in the chaos, that is not an acceptable position.

"Right now I feel that every city office should have metal detector doors," Dewar said. "They should have security guards. I would be happy to go through a search every single day if it kept from this ever happening again."