Accessibility links
Virginia Beach Gunman Shot 2 Department Supervisors In Government Office Officials are still exploring how the shooter's employment status factored into his decision to commit a stunningly violent act at his workplace. 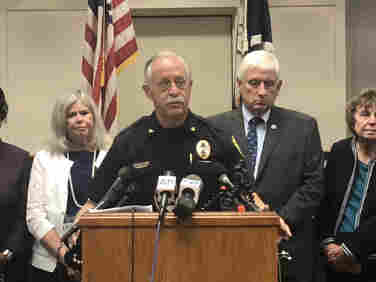 The gunman who opened fire inside a Virginia Beach government building on Friday shot two supervisors, a high-ranking city government official has confirmed.

Among the 12 people who were fatally shot was Richard Nettleton, a construction manager in the Virginia Beach Department of Public Utilities and a supervisor in the alleged gunman's department. Stephen Motley, Nettleton's supervisor, was also shot in the attack but is recovering from injuries at an area hospital, according to the official.

The official, who requested anonymity to discuss an ongoing investigation, told NPR that the suspect's direct supervisor was not shot in the incident.

While officials are still exploring how the shooter's employment status factored into his decision to open fire at his workplace, his having struck two bosses in his department adds to the growing questions about whether the gunman, identified by officials as DeWayne Craddock, a longtime government engineer, decided to carry out a rampage at work because of his relationship with his employer.

Top city officials told reporters at a recent press briefing that Craddock submitted his resignation by email on Friday morning, closing out a 15-year career in the Department of Public Utilities and coming just hours before he stormed into the government office and sprayed bullets "indiscriminately" on three floors of a building situated in a sprawling office complex in Virginia Beach.

While the two supervisors were among those hit by the gunman's bullets, authorities would not confirm that he specifically targeted any individuals in the shooting.

Virginia Beach City Manager Dave Hansen said that to the best of his knowledge, the shooter was "in good standing" in his department and that records indicate his performance was "satisfactory." He also said the shooter had not had any disciplinary issues, as far as investigators can tell.

Hansen told reporters that investigators are still probing whether the shooter's "employment status has anything to do with these events," adding, "That will be part of the ongoing investigation."

The gunman, police said, appears to have had no criminal record and purchased his weapons legally. In addition to two .45-caliber handguns recovered, police say he also had extended ammunition magazines and a silencer device.

He was able to access the building with his employee identification, a routine act he had done every day he came to work for the past 15 years.

Hansen, the city manager, said that "family liaison teams" have been assigned to assist the loved ones of victims with matters like counseling services, finding financial assistance and planning funeral services.

At a gas station across the street from the site of the shooting, Jenna Taylor had stopped to refill and said the entire community is trying to heal in the aftermath of the tragedy. She and her husband have lived in Virginia Beach for two decades. Taylor said the incident has left the beach town shaken.

"It really hits close to home," Taylor said. "We only live a few miles from here. I walk by that building with my dogs all the time, and I've been in that building several times, so the whole community is grieving with them."

At a family home of the suspect in Yorktown, Va., about an hour outside Virginia Beach, a note affixed to the door extends "heartfelt condolences" to the victims. 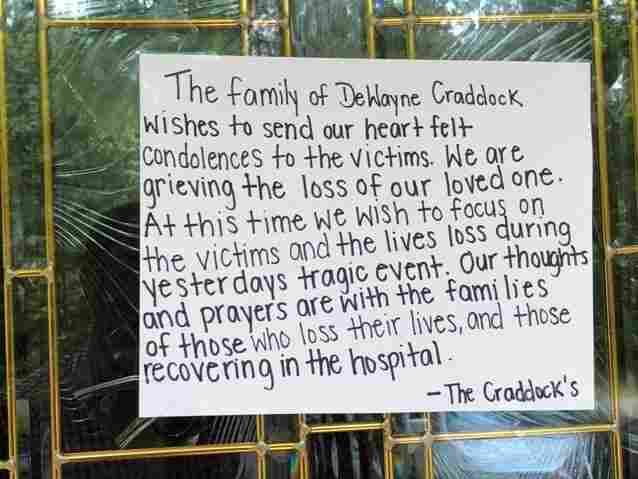 A note attached to the door of the home of one of the shooter's family members extends condolences to the victims of the Virginia Beach shooting. Brakkton Booker/NPR hide caption 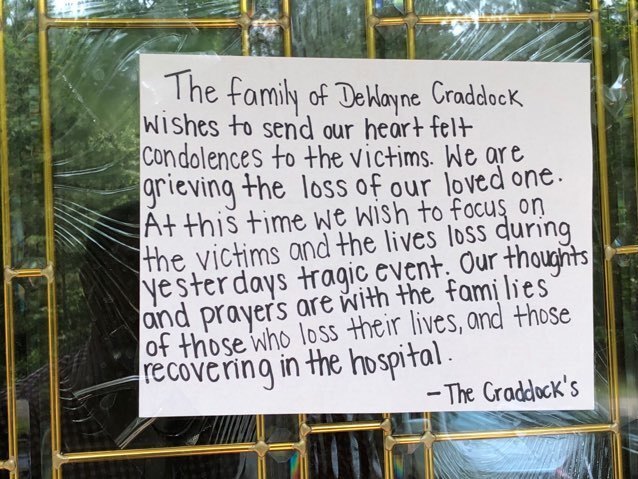 A note attached to the door of the home of one of the shooter's family members extends condolences to the victims of the Virginia Beach shooting.

"The family of DeWayne Craddock wishes to send our heartfelt condolences to the victims. We are grieving the loss of our loved one. At this time we wish to focus on the victims and the lives loss during yesterdays tragic event. Our thoughts and prayers are with the families of those who loss their lives, and those recovering in the hospital. —The Craddock's"

An NPR reporter's knock on the door of the home went unanswered.